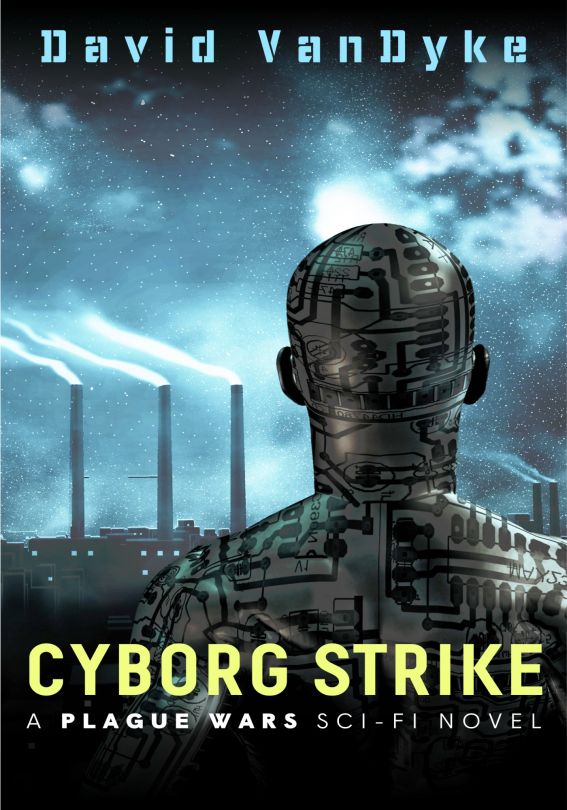 Published by David VanDyke at Smashwords

This ebook is licensed for your personal
enjoyment only. It may not be re-sold or given away to other
people. If you would like to share this book with another person,
please purchase an additional copy for each recipient. If you’re
reading this book and did not purchase it, or it was not purchased
for your use only, then please return to Smashwords.com to purchase
your own copy. Thank you for respecting the hard work of this
author.

No part of this publication may be
reproduced, stored or transmitted in any form, or by any means
whatsoever (electronic, mechanical or otherwise) without prior
written permission and consent from the author.

This book is a work of fiction. Names,
characters, places, businesses and incidents are either products of
the author’s imagination or used fictitiously. Any resemblance to
actual events, locales or persons, living or dead, is entirely
coincidental.

Thanks to my friends and fellow
science-fiction authors Vaughn Heppner and B.V. Larson, for their
tireless encouragement, for persevering and showing me the way.

Thanks to my readers – my lovely wife Beth,
my friends and fellow authors Ryan King and Nick Stephenson, and
the members of our Friday Night Writes group for their excellent
critiques; their feedback has made me a better writer and this book
a better novel.

Chairman Daniel Markis gazed out over the
well-manicured green grounds of the Carletonville Research
Laboratory, the low-key but heavily guarded home of the Free
Communities Council central administration building. His office’s
floor-to-ceiling plate glass window made it seem as if he could
roll his office chair backward into open space, but the material
was actually thick and bulletproof up to at least fifty caliber.
The burgeoning nanotech industry had provided new materials of all
sorts, and the tough stuff it was made of was just the first of
many.

A certain vulnerability to attack was the
price he paid for the view. That gave Karl Rogett, his security
chief, fits, the idea that one heavy weapon would decapitate the FC
government. Then again, it gave the man something to do.

Daniel shrugged to himself. All life was
risk, and despite what people thought, the FC would not fall apart
without him. Someone always stepped up and filled a power vacuum,
and all of the council members were competent.

His secure terminal beeped at him, the one
that faced away from the window. He rolled the chair over to it,
sliding his keycard into the slot. Pressing his fingertips to the
scanner, he repositioned his head to let the laser simultaneously
check his retinal patterns. Karl told him they would soon be
installing a DNA sampler “based on Meme technology.”

That phrase was becoming very common in
research circles these days.

In fact, humanity’s nemesis was perversely
responsible for much of the progress in the world right now.
Technology was just one aspect. Daniel considered Earth’s fragile
newfound semi-unity to be far more important, and inspiring. He
wondered if it would all fall apart once the threat abated.

He also wondered whether it ever would abate
– at least within his lifetime. If the intelligence info captured
from the Meme scout ship could be believed, the enemy empire
spanned thousands of worlds.

How can we stand against that? And if we do,
how long will it take to beat them?

If it wasn’t for the vast distances involved,
and the limitation of the speed of light itself, he would have
given humanity no chance at all. Right now they were in a race:
only nine short years until the next attack came. In that time, he
had to organize the world to build some kind of military force that
would not only beat this Destroyer super-ship of theirs, but defeat
it decisively enough that Earth would retain enough capacity left
to rise to the next challenge. A Pyrrhic victory that left them
prostrate would merely delay the inevitable.

On his terminal, he read a decrypted message
from Cassandra Johnstone, his spymaster: a report he had been
waiting for. In reply, he typed instructions for her and fired it
off to her location in Antarctica.

Daniel hoped she could pull off the operation
she proposed. She was confident, but the opposition was formidable,
and at least as clever as she was. If it wasn’t for a certain blind
spot in the opponent…

He wondered about Cass’ potential blind
spots…and his own.

He shook his head. Covert ops were a
necessary evil, not something he relished. It made him chuckle to
think that the most traditionally religious among his inner circle
was also his most devious. A Jesuit he might have expected in the
role, but not a southern Presbyterian drop-forged into a highly
effective CIA field agent in pre-Plague Moscow.

Himself, he believed in God, and right and
wrong, but didn’t think too deeply past all that, which saved a lot
of arguments with his agnostic scientist wife, Elise. He figured if
God cared about Earth or the rest of the universe, He was sure a
hands-off kind of deity, and expected people to take care of their
own problems.

Such as the Meme Empire.

Which was one hell of a problem.

That reminded him. He called up another file
on the screen and perused it for at least a half hour, ignoring
calls, and a couple of intercom buzzes from his administrative
assistant Millie Johnstone. Eventually he decided on a course of
action, and sent another set of instructions to his spymaster. This
time, however, he followed it up.

Opening his office door, he called, “Millie,
could you get your mom on the secure line please?”

From behind her desk, she looked like the
spitting image of her mother Cass, especially as the Eden Plague
had returned the elder Johnstone her youth. However, the daughter
seemed to have no particular love of the world of spies, preferring
to be the good right hand of Earth’s most influential, though not
overtly powerful, man.

“You know, you could just call her
yourself.”

“I can never get that stupid phone to work
right. Just dial her up and transfer her, will you? Thanks.” Daniel
backed into his office and closed the door, waiting for the beep
that told him the line was live on the exotic-looking box: the
custom-made one with the rather ordinary handset that sat on one
end of his desk.

Finally the encrypted call came. “Cass? Yes,
I sent you a secure message about the Septagon Shadow rogue cyborg
program file. I want to turn it over to President McKenna.”

“Is that wise?” Not surprisingly, Cassandra
sounded skeptical. “The US clandestine services are still riddled
with leaks and informants – some of them mine, that’s how I know.
If you do that, you might as well just post it on the
internet.”

“I figured you’d do some work on it before we
did that. Some redaction, a bit of exaggeration here and there…you
know the drill.”

Her tone brightened. “That’s not a bad idea.
But they won’t like being used to pass disinformation.”

“Well, that will be on them. I want to give
it to him Eyes Only, US President. If he can’t keep it to himself,
maybe we can trace the path of information and find out where it’s
going.”

“It’s just an idea, and I’m sure you and your
people can refine and fancify it a lot…but that’s my plan. The why
and what is up to me, the how is yours. And, even if it doesn’t
bring our quarry out of the woodwork, it may prompt McKenna to
prioritize the hunt with his people.”

“Why? The US captured the Septagon labs and
low-level researchers. We acquired almost all the information worth
having, and got to study Rick as a living test subject before he
went into space. If their top people got away, so what? The Free
Communities will probably catch up in applied cybernetics in the
next couple of years, especially with Australia pushing for the
technology to be used in the Space Marine and Fleet programs.”

Daniel chewed the inside of his cheek for a
moment, trying to put into words what was really just a hunch.
Thinking aloud helped him structure his arguments. “Look…in the
last decade we’ve seen three world-changing technologies developed:
Meme-adapted biotech, Earth-grown nanotech, and the new cheap
access to space through the cloned Meme fusion drives. I can’t
shake the feeling that cybernetics will be equally important, and
we can’t let a rogue entity develop it into something that we
aren’t ready to deal with. Those prototype Shadow Men proved to be
worth five or ten nanocommandos.” He sighed. “It’s an arms race we
can’t really even afford to run, much less lose. It will distract
from the real effort – preparing for the Destroyer. I’d much rather
find them and take them down now, than wait for them to hit us at a
time and place of their choosing.”

“All right, all right,” Cassandra replied.
“I’ll prep the file. I’ll make it lead the Americans to exactly the
conclusions we want. And I’m sure you want me to tell Rick when the
time comes.”

“Tell Rick?” Daniel’s confusion seemed clear.
“What does your son have to do with anything?”

Cassandra’s eye-roll came through in her
voice. “Just like a man. Daniel, he and Jill Repeth are still up
there working on the space defense program. Jill is one of
President McKenna’s favorite go-to operatives. As soon as you start
this ball rolling, he will call for her to come down and join the
hunt for Septagon Shadow, and Rick’s not going to be happy.”

“And you’re his boss. He’s a Free Community
of South Africa citizen now, not an American, and I swear to you,
Daniel Markis, that I am
not
going to be the one to tell him
Jill is dead, or worse. That’s on you.”

He could hear her breathing rasp through the
satellite phone line, and he took a deep lungful himself. “Fair
enough. It’s on me, as you said. Now…about that other thing; the
other guy.”

“You still want to just ask him to come? I’d
rather try to finesse it.”

“Cass, you just want to win the spy game.
He’s not a man to take kindly to that.”

“On the contrary. I think he lives for it.
And he’s your friend. He showed that when he returned the
children.”

“Yes…” Daniel shifted the receiver to his
other ear. “But I’d rather not presume upon that friendship. Golden
rule, and all that.”

Silence reigned on the line for a long
moment, then Cassandra went on. “Perhaps I can split the
difference. How about if I let him discover you would like to talk
to him? Then he can make up his own mind about whether it’s
aboveboard, or a bluff, or a double bluff.”