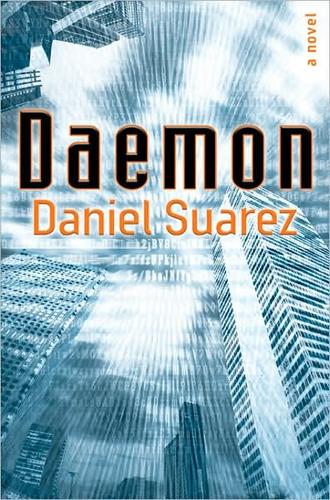 PUBLISHER’S NOTE
This book is a work of fiction. Names, characters, places, and incidents either are the product of the author's imagination or are used fictitiously, and any resemblance to actual persons, living or dead, business establishments, events, or locales is entirely coincidental.

n) n
—A computer program that runs continuously in the background and performs specified operations at predefined times or in response to certain events.

Condensed from “Disk and Execution MONitor”

Chapter 20://
Speaking with the Dead

Chapter 28://
Ripples on the Surface

Matthew A. Sobol, PhD,
cofounder and chief technology officer of
CyberStorm Entertainment
(
HSTM
—Nasdaq),
died today
at
age 34
after a prolonged battle with
brain cancer
. A pioneer in the $40 billion computer game industry, Sobol was the architect of CyberStorm’s bestselling online games
Over the Rhine
and
The Gate
. CyberStorm CEO Kenneth Kevault described Sobol as “a tireless innovator and a rare intellect.”

W
hat the hell just happened?
That was all Joseph Pavlos kept thinking as he clenched a gloved hand against his throat. It didn’t stop the blood from pulsing between his fingers. Already a shockingly wide pool had formed in the dirt next to his face. He was on the ground somehow. Although he couldn’t see the gash, the pain told him the wound was deep. He rolled onto his back and stared up at a stretch of spotless blue sky.

His usually methodical mind sped frantically through the possibilities—like someone groping for an exit in a smoke-filled building. He had to do something. Anything. But what? The phrase
What the hell just happened?
kept echoing in his head uselessly, while blood kept spurting between his fingers. Adrenaline surged through his system, his heart beat faster. He tried to call out. No good. Blood squirted several inches into the air and sprinkled his face.
Carotid artery…

He was pressing on his neck so hard he was almost strangling himself. And he’d been feeling so good just moments before this. He remembered that much at least. His last debts repaid. At long last.

He was getting calmer now. Which was strange. He kept trying to remember what he’d been doing. What brought him here to this place. It seemed so unimportant now. His hand began to relax its hold. He could see plainly that there was no emergency. Because there was no logical scenario in which he would emerge from this alive. And after all, it was his unequaled talent for logic that had brought Pavlos so far in life. Had brought him halfway around the world. This was it. He’d already done everything he would ever do. His peripheral vision began to constrict, and he felt like an observer. He was calm now.

And it was in that cold, detached state that he realized: Matthew Sobol had died. That’s what the news said. And then it all made sense to him. Sobol’s game finally made sense. It was beautiful really.

Scott Roarke 03 - Executive Command by Gary Grossman
I Have No Mouth and I Must Scream by Harlan Ellison
Salem's Sight by Eden Elgabri
Highlander Brawn by Knight, Eliza
A Bride at Last by Carolyne Aarsen
Lancelot of the Pines (Louisiana Knights Book 1) by Jennifer Blake
The King's Key by Cameron Stelzer
The Member of the Wedding by Carson McCullers
The Death of an Irish Consul by Bartholomew Gill
Undeniable by Doreen Orsini
Our partner