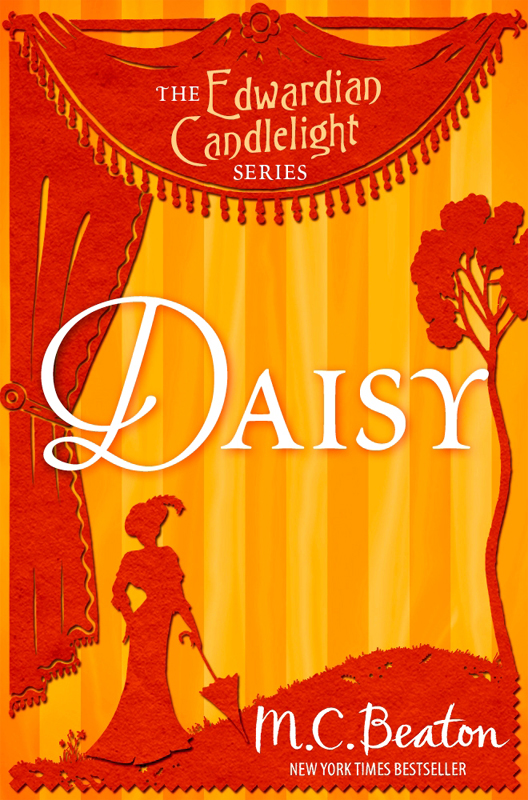 M. C. Beaton
is the author of the hugely successful Agatha Raisin and Hamish Macbeth series, as well as a quartet of Edwardian murder mysteries featuring heroine Lady Rose Summer, several Regency romance series and a stand-alone murder mystery,
The Skeleton in the Closet
– all published by Constable & Robinson. She left a full-time career in journalism to turn to writing, and now divides her time between the Cotswolds and Paris. Visit
www.agatharaisin.com
for more, or follow M. C. Beaton on Twitter:
@mc_beaton
.

The Skeleton in the Closet

This edition published in the UK by Canvas,
an imprint of Constable & Robinson Ltd., 2013

The right of M. C. Beaton to be identified as the author of this work has been asserted by her in accordance with the Copyright, Designs and Patents Act 1988

For Harry Scott Gibbons
and Charles David Bravos Gibbons,
with all my love.

The very leaves out here seem to be different, thought Daisy Jenkins, clutching hold of her friend’s arm. They spread out on the ground before them, sparkling red and gold in the autumn sunshine. Not like the rusty plebeian kind that carpeted the town of Upper Featherington, now uncomfortably a long way behind.

“We shouldn’t ought to be doing this,” said Daisy for the hundredth time. Her friend Amy tossed her blonde curls. “Nobody’s going to find out. We’re just going to take a peek.”

Daisy looked enviously at her friend. Amy Pomfret had a careless, sunny nature and, having made up her mind to play truant from school to spy on the Earl of Nottenstone’s house party, she had plunged into the adventure with gay abandon, seemingly free from the dark fears of retribution that haunted Daisy’s sensitive mind.

A shy and retiring girl, Daisy had never quite got over being chosen by Miss Amy Pomfret—the most popular girl in the school—to be her best friend. So when Amy had suggested the adventure, Daisy had not had the courage to refuse.

“I think about here will do,” said Amy, stopping in front of a curve of moss-covered wall. “Nobody’s about. Come along, Daisy, over you go!”

Daisy timidly hitched up her faded tartan skirts to reveal an expanse of cotton petticoat, bleached yellow with age, and a pair of cracked and worn button boots. She nimbly scaled the wall and dropped down on the other side with her heart beating fast. With an energetic thump, her friend joined her.

“Now don’t be such a scaredy-cat,” whispered Amy. “All we’re going to do is creep through the woods to the edge of the garden and have a look at them.”

“What if they’re not outside?” whispered Daisy.

“Bound to be,” said Amy. “Clarrie Johnson’s mum has been hired special for the day and she told Clarrie that they takes their tea on the lawn ’round about now.”

Daisy’s heart jumped into her throat with every popping twig and every crackling movement of their starched petticoats. She almost wished they would be discovered so that the punishment would be swift and fast, for Daisy had been firmly taught by the methodist chapel that the sinner never escaped judgment. And what could be a worse sin than to be found trespassing on the hallowed aristocratic ground of Marsden Castle?

The battlements of the castle suddenly seemed to lean over the trees above them and they could hear the faint sound of voices and laughter. They edged closer and found themselves on the edge of the woods with a vast expanse of lawn rolling out in front of them.

“There they are!” hissed Amy, crouching down behind a bush and pulling Daisy with her.

Daisy drew in her breath in a sharp gasp.

The house party was spread out over the lawn, engaged in a game of croquet. Everyone was dressed in white. The ladies in cascades of white lace, with tiny waists and voluminous hats, and the gentlemen in white flannels and blazers.

Amy put her lips close to Daisy’s ear. “That’s the Earl and Countess… over there.”

The handsomest couple Daisy had ever seen stood at the edge of the lawn. The Earl was a tall young man with fair hair the color of ripe corn. His classical features were almost effeminate in their perfection and his eyes, a startling, piercing blue. In complete contrast was the Countess, her masses of heavy black hair almost hidden by an elaborate picture hat of swirling white tulle and artificial flowers. She moved her small body with easy, catlike grace in all the stiff formality of white lace that cascaded in structured layers from throat to hem. She had entangled her croquet mallet in her heavy rope of pearls and was playfully insisting that all the young men of the party should help her.

The rest of the world fled from Daisy’s mind as she stared at the enchanted picture… at the world of gods and goddesses to which she could never belong. Just for this little while, she, Daisy Jenkins, would imagine that she was part of it. She would dream that she was one of the guests and that in a minute, one of those splendid young men would come searching for her.

The Countess was calling everyone to tea in her high, clear voice when one of the young men gave the croquet ball an energetic swipe with his mallet. It flew toward them, right into the bushes and struck Amy on the leg. Amy sprang to her feet with an undignified shriek and started to hop about.

Daisy got slowly to her feet and then stood frozen with terror. “Flushed two of ’em,” yelled the young man. “Hey, Bo, Cecil, Jerry, everybody…nymphs in the woods!”

With insolent, languid steps the members of the house party formed a half circle in front of the two girls.

The Countess’s enormous brown eyes flicked over the two girls in their shabby tartan dresses. “Schoolgirls,” she remarked as if identifying a common type of garden pest. And then without even turning her head, “Curzon…take them away.”

Daisy’s heart sank to her worn boots and she hung her head. Curzon was a leading light of the methodist chapel. Her aunt would hear of it. There was no escape now.

“Oh, do they have to go?” cried a young man with a weak chin, horrendous acne, and an insane giggle. “The blonde one’s quite pretty, you know.”

Amy gave him a dazzling smile. “Daisy and me just wanted to get a look at you. We didn’t mean no harm.”

The Earl turned lazily to his wife. “There you are. They didn’t mean no harm, my dear.”

“They just wanted to see the aristocrats at play,” roared a horsey girl. “We’ve even got a real live Duke for you to gawk at, ain’t we? Your Grace, The Most Noble Duke of Oxenden, please present yourself for inspection.”

A tall dark man moved to the front of the crowd. Daisy raised her eyes timidly and then lowered them hurriedly. The newcomer had cold, harsh features and eyes of a peculiar, almost yellow, shade. They seemed to bore right into her. “What is your name? You…with the brown hair.”

“Daisy Jenkins… an’ please Your Grace.” The voice whispered faintly, like the leaves drifting over the immaculate lawns.

The Countess’s voice cut across. “Escort these persons off the estate immediately, Curzon. And send Bill from the lodge to report them to their headmistress.”

There was a short, shocked silence, punctuated by a few sympathetic murmurs of “I say!” and “Bit hard cheese that,” as the two girls were led off by the stern Curzon.