Read Dance with the Dragon Online

Dance with the Dragon 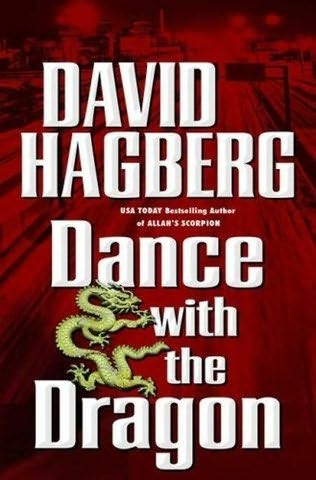 Part Two: The Next Day

Part Three: The Next Day

This book is for Lorrel.

… we must pass through solitude and difficulty, isolation and silence, in order to reach forth to the enchanted place where we can dance our clumsy dance and sing our sorrowful song—but in this dance or in this song there are fulfilled the most ancient rites of our conscience in the awareness of being human and of believing in a common destiny.

TOWARD THE SPLENDID CITY

The foothills of northern Mexico’s Sierra Madre were bathed in the cold silver light of a full October moon as Louis Updegraf stopped a moment behind a stand of pine trees to catch his breath. Somehow everything had gone horribly wrong over the past two weeks, and this evening he was running for his life because of what he’d learned. The job was no longer a game.

At thirty-three he was a tall man, well built, with a dark complexion and a large Gallic nose. Not so long ago, someone he thought was a friend had told him that he could be Gerard Depardieu’s twin bother. He’d thought the French actor was good, but not very handsome. But that was the story of his life; there was always something not quite right.

He had come west, just below the crests of the hills, and he figured by now he was at least three miles from the compound. The city of Chihuahua was spread out below in the valley, and as he took out his 9 mm Beretta 92F and ejected the magazine to check the pistol’s load for the third time, an Aeromexico 727 took off from CUU Airport in the distance and headed southeast toward Mexico City. He was supposed to be on that flight, he reflected bitterly. From here it was a long walk. But if he could get into town he could call for help, though how he would explain his presence up here he hadn’t figured out.

First things first. He had to stay alive long enough to reach a telephone.

He stepped out from the shelter of the trees and continued west, angling down into the valley where he thought he could intercept the highway to Cuauhtémoc. From there it might be possible to get a ride into Chihuahua, provided the Doll’s people didn’t catch up with him.

In high school in Madison, Wisconsin, he had been an all-star quarterback on the football team, and he had gone to UW to study political science on a four-year football scholarship. In his senior year he had taken the school to the Rose Bowl, and in the eleven years since then he’d not let himself get out of shape. It was one thing in his life that he was proud of, one thing that no one could take away from him.

He was dressed lightly, in blue jeans, T-shirt, and windbreaker, sneakers on his feet, and although the mountain air was chilly at this hour he was sweating by the time he reached the power lines two hundred meters southwest. The high-voltage lines came down to the city in a broad swath cut through the trees.

Once again Updegraf halted up in the shelter of the forest. It was possible that no one was coming for him. But it was equally possible not only that they were somewhere behind him, but that they may have doubled around and gotten ahead of him. It was possible that Roaz’s shooters were right now waiting in the woods across the fifty-meter grassy lane that was lit up like day.

He nervously switched the safety catch to the off position, and then on again. It would be just his rotten luck to stumble on a rock and shoot himself. Save the opposition the trouble.

Cocking an ear, he held his breath to listen for something, a snatch of conversation, a rustling branch, a dislodged rock tumbling down the hill. But except for the sounds of a hunting bird in the distance, perhaps a hawk or a screech howl, and the light breeze in the treetops, the hillside was silent.

Updegraf weighed his chances. Miguel Roaz and the people working for him were smart, but then they had been trained by Chinese intelligence, so they knew their jobs well. On top of that they were highly motivated. There was a lot of money involved. A fabulous amount of money. More than any of them could possibly grasp.

“Señor, please to put down your weapon,” someone called from across the clearing.

Updegraf’s heart lurched. He stepped back, and as he switched the safety catch off and started to raise his pistol, someone was right behind him, the muzzle of a gun pressed to the base of his skull.

“Don’t do anything foolish,” a man speaking English with a heavy Mexican accent warned.

Louis didn’t recognize the voice, but he could have been any one of the dozen security people from the compound. He didn’t know them all. But the fact that he and the other one were here meant that they knew he’d gone over the wall almost immediately after he’d tried to drive into town and been turned back.

“The camera. It wasn’t in your car, which means you must have it with you.”

“Then what?” Updegraf asked. There wasn’t a chance in hell they would let him leave here alive even if he gave them the digital camera that had been used to snap pictures of the guests, especially the new one whose presence had come as a total surprise. He had to survive to call this home.

The Mexican laughed softly. “Then you can either come back to the house for your car, or continue with your hike in the woods.”

Updegraf weighed his chances, which didn’t seem very good. The muzzle of a pistol was pressed firmly against the back of his skull. If he tried to duck or turn suddenly so that he could bring his own pistol to bear, he would most likely get a bullet in the head. But he had no other options. What he’d learned was too important.

“Okay, you win,” he said. He started to reach into his jacket pocket, but the Mexican jammed the pistol even harder.

Updegraf suddenly felt calm, the same way he had just before every key play in a football game. All he could do was his best. “You’re going to shoot me anyway—,” he said, and he suddenly turned away as he brought his pistol up over his left shoulder.

A thunderclap burst inside his head, and for an instant he saw a billion stars all cascading one over the other. The sight was the most beautiful thing he’d ever seen.

CIA station chief Gilbert Perry parked his smoked silver Mercedes 500SL in his spot behind the U.S. embassy on Paseo de la Reforma a full hour before his customary time of nine in the morning, and took the ambassador’s elevator up to his suite of offices on the fourth floor. Tom Chauncy, his number two, had telephoned at six this morning telling him to get his ass to the embassy. Something so big was up that it could not be discussed on an open line.

“We goddamned well might have to shut down the entire operation until we get this shit straightened out!” Chauncy had shouted.

Perry, who’d prided himself on his cool demeanor under fire—he’d spent three months in Kabul and a full thirty days doing dirty duty at Baghdad’s Abu Ghraib—was irritated. He damned well was going to have it out with Thomas. Gentlemen simply did not lose their heads in a crisis, and they certainly did not speak to a superior officer in such a peremptory fashion, no matter what the reason. A report of this incident would be placed in Chauncy’s personnel jacket.

At six three, with a slender build, penetrating blue eyes, a narrow angular face, and a thick head of hair parted down the middle that had turned gray when he was in his freshman year at Harvard, Perry was called “the Judge” by friends, a sobriquet he discouraged, but one that he secretly enjoyed.

His cover as special assistant for cultural affairs gave him the opportunity to mingle socially with President Ricardo Sabina and other high-ranking Mexican government officials, as well as with the upper echelons of the foreign diplomatic corps here. Symphonies, operas, ballets, fine restaurants, hunting lodges in the mountains, lavish fishing retreats along the Gulf and Pacific coasts, and a nearly endless stream of cocktail parties, receptions, and full dress balls, all were exactly his cup of tea. He’d confided to a friend in Washington that at thirty-eight he was young for this sort of duty, but being here was preparing him for the eventuality of becoming the deputy director of Central Intelligence. It was a position he felt he’d been born for.

Temperance by Ella Frank
His Domination by Ann King
Astrosaurs 3 by Steve Cole
The Monster's Daughter by Michelle Pretorius
El cadáver imposible by José Pablo Feinmann
Color of Justice by Gary Hardwick
Penny le Couteur & Jay Burreson by Napoleon's Buttons: How 17 Molecules Changed History
The Annotated Lolita: Revised and Updated by Nabokov, Vladimir
The Girl Who Wrote in Silk by Kelli Estes
The Keepers of the House by Shirley Ann Grau
Our partner