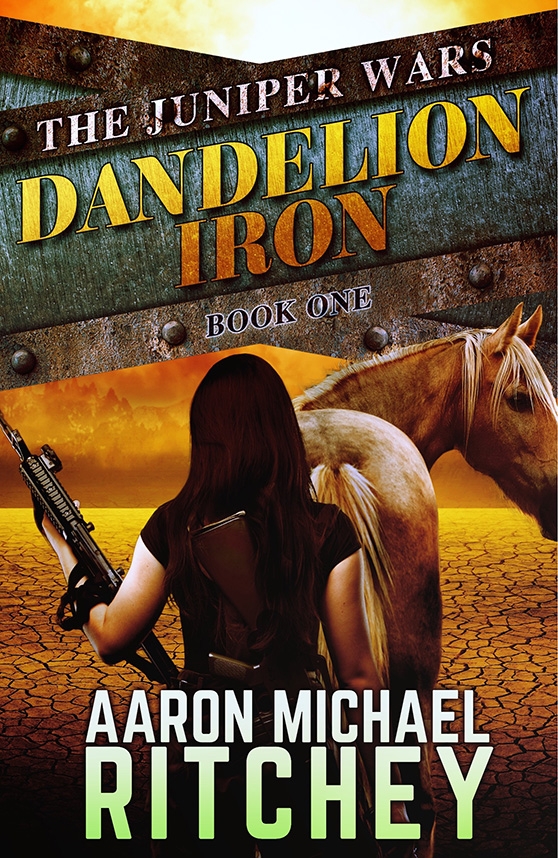 Aaron Michael Ritchey writes with a poetic grace that reminds me of a young Ray Bradbury.

Ritchey’s voice is authentic and engaging.

The Sino-American War has decimated several generations of men, and the Sterility Epidemic has made 90% of the surviving males sterile.

Electricity does not function in five western states. Colorado, New Mexico, Utah, Wyoming, and Montana are territories once again. Collectively, they are known as the Juniper.

It is the most dangerous place on Earth.

On a desperate post-apocalyptic cattle drive to save their family ranch, Cavatica Weller and her two gunslinging sisters stumble across a rare boy. Sharlotte wants to send him away, Wren wants to sell him…and Cavatica falls in love with him.

Little do they know that an inhuman army is searching for the boy and will stop at nothing to find him.

Welcome to the world of
The Juniper Wars
. 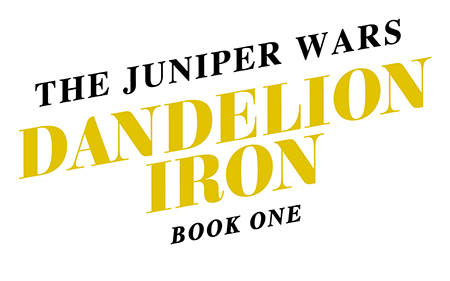 All rights reserved. No part of this book may be reproduced or transmitted in any form or by any electronic or mechanical means, including photocopying, recording or by any information storage and retrieval system, without the express written permission of the copyright holder, except where permitted by law. This novel is a work of fiction. Names, characters, places and incidents are either the product of the author’s imagination, or, if real, used fictitiously.

This book is licensed for your personal enjoyment only. This ebook may not be re-sold or given away to other people. If you would like to share this book with another person, please purchase an additional copy for each recipient. Thank you for respecting the hard work of this author.

The Sino wasn’t a war. It only looked like that to the casual observer. Really, the Sino was an Armageddon.

—Former President Jack Kanton
48th President of the United States
On the 29th Anniversary of the start of the
Sino-American War
July 28, 2057

Holy Mary, Mother of God, help me to tell my story right, ’cause the memories make it hard. Some are sharp, like the devil’s thorn weeds that grew out of the dandelion patch near my daddy’s grave. Others are pretty, like those dandelion flowers in spring sunshine.

I’ve read a lot about the tragedies of the first half of the twenty-first century. Lots of history books about the Sino-American war, and the Sino is a hard bit of bacon for anyone to chew, Chinese and Americans alike. Lots of novels and videos about the Yellowstone Knockout and the five states it plunged into darkness: New Mexico, Colorado, Utah, Wyoming, and Montana. Otherwise known as the Juniper.

My story is about what happened after all that—after the city people left the Juniper, after the salvage operators took everything that wasn’t nailed down and folks started ranching and farming. A story about how my love for a boy almost got my family killed when everything we ever loved was in dire jeopardy and our only hope was on a gamble; bad cards in an impossible poker game with the Devil grinning us down. A love story, an adventure, but also a family drama about three sisters who loved each other as much as they hated each other as much as they wanted to be like one another.

When I was sixteen, I was living in Cleveland, Ohio, going to the Sally Browne Burke Academy for the Moral and Literate. A bright future lay ahead of me. That all changed forever on the Ash Wednesday of 2058, a holy day of obligation that broke my heart.

Like always, my sister Wren did the heartbreaking. She was good at that.

I truly believe in boy meets girl. I have no doubt romantic love is Divine will. Even though our men are waning, we must trust in the wisdom of romantic love and not let money, fear, or force interfere with God’s perfect plan.

Wren was on her way to my boarding school with bad news and a gun in her hand. She’d been living wild in Amarillo.

If I’d known my sister was coming, I’d have run.

My best friend, Anjushri Rawat, and I were ditching history by hiding out in an empty classroom—just the two of us surrounded by school desks and wood polished to a shine. Dust motes floated in the sunshine streaming through the tall windows. Made the room smell musty, but in a good way. Between the windows were RSD screens embedded in the wall, each showing a different bit of video. Some were of famous alumni from the Sally Browne Burke Academy for the Moral and Literate in Cleveland, Ohio, women doing important things, flashes of their biographies. Others showed nature scenes, which supposedly were meant to soothe us, but no one paid much attention to them. I didn’t.

Right then, all I cared about was making sure Anju went to the Sammy Hawkins dance with Billy Finn, so true love could win the day. Well, true love was going to need a lot of help. Anju didn’t have a chance at all with Billy.

Her ethnicity wasn’t the issue, nor was her religion, since she was a Catholic from Goa, a particularly Christian part of India. Anju and I went to Mass together.

No, the problem was Billy’s parents, who were drooling over the wealth Becca Olson brought to the table.

Boys were rare, and I knew I’d never get one. I wasn’t rich or pretty enough. My body betrayed me at every turn—too big, too tall, my face too round. My eyes were reddish-brown like Colorado mud, my hair as strawed and yellowed as Juniper grass in January.

Only about fifty boys attended the Academy, roughly ten percent of the student population. For some girls, the competition for a date could be brutal, but not for me. Most days, I accepted the fact that my true treasures were my dedication to the New Morality and Anju’s friendship. I had my fantasies about boys like any sixteen-year-old girl, but I figured I’d die unmarried. There were worse things.

I’d grown up in the Colorado territory and I’d witnessed such worse things firsthand. Not that Mama sent me away to boarding school to keep me safe. She’d made it clear—safety was an illusion and God loved the bold. At twelve, I packed my gear and climbed aboard a train, eastbound. I’d only gone home once ’cause it’s a long way from Cleveland to the Juniper, a long trip, dangerous and expensive.

No electricity in the Juniper. None at all. During the early years of the Sino-American War, the Chinese nuked Yellowstone and killed the buzz in five western states. Nearly thirty years after the Yellowstone Knockout and still no power. President Jack tried to govern those states, but it wasn’t long before America was sewing flags with only forty-five stars.

In that classroom with Anju, I figured I was done with my home in the Colorado territory forever. Sure, I might visit the ranch now and again, to see Mama and my older sister Sharlotte, but I was learning electrical engineering and looking at fat jobs in big corporations.

Besides, could I live without the Internet and video? Not hardly.

But first, true love, Anju and Billy Finn, forever and ever, Amen. That was the only reason I would sin by ditching class. Anju, however, wasn’t impressed with my plan.

“I know you’re trying to be all heroic, but it’s not going to work,” she said. “Billy and I can still be friends, I guess, but we both know Becca Olson is going to get him in the end.”

Everything she said was the truth, but my plan popped all hot and greasy in my head. Regardless of the odds, I’d win the day for love and get revenge on that no-good, stuck-up Becca Olson. “Come on, Anju, throw it in gear and think happy thoughts. How many seasons of
Lonely Moon
have you and Billy watched together?”

“All of them,” she admitted.

“All of them. And do you think Becca Olson ever watched even a single episode?”

Anju shook her head. Her hands were wrapped up in her New Morality dress, lots of gray fabric from throat to ankles. I’d seen her in a sari, all that brightly colored fabric contrasted beautifully with her dark features and darker hair, but she was New Morality, like me.

“Okay.” Anju moved to the door then turned around. “You know, odds are, we’ll both die alone.”

I rolled my eyes. “Thank you, oh voice of doom. I woke up with a little headache. Prolly brain cancer, huh?”

I laughed for both of us. I was used to doing it. “It’s gonna be okay.”

“Thank you, Cavatica. Thank you for being my friend.”

Anju disappeared out the door, leaving me alone with my Hayao 5 electric slate and my plan, two things I loved as much as any girl ever loved a cute boy or the season premiere of their favorite show. The first thing I did was text Becca Olson to invite her to come chat with me, face to face. Kept it vague and real mysterious so she’d come. Then I checked the audio cables plugged into my slate, checked the server connection, checked the microphone. Everything was ready.

A flicker on one of the RSDs caught my eye and I had a moment of wonder. One screen showed Canadian geese on the wing flying in a
V
during migration. Outside the window, I caught a glimpse of the same species of geese, flying through a sky blackened by clouds. The downy white of their breast feathers gleamed in contrast to the gray storm, both on the video and outside the window. For a moment, strong memories of the ranch took me away—feet in stirrups, a restless horse under me, listening to the honking racket of geese on the wing.

The Prince and the Pauper by Mark Twain
Company Man by Joseph Finder
A Change of Needs by Nate Allen
Boot Hill Bride by Lauri Robinson
1993 - In the Place of Fallen Leaves by Tim Pears, Prefers to remain anonymous
A Shadow in Yucatan by Philippa Rees
Naughty Bits by Tina Bell
Survivor by Lesley Pearse
Genesis by Collings, Michaelbrent
Document Z by Andrew Croome
Our partner