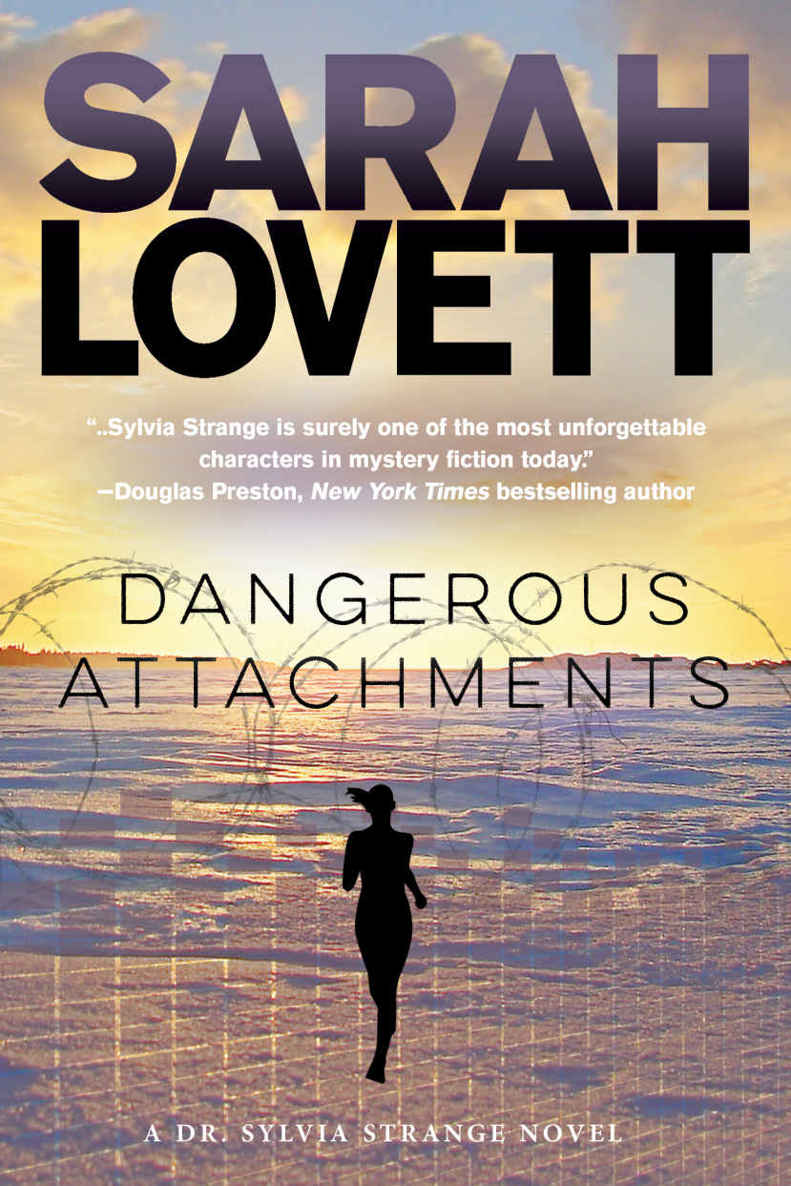 First published in the U.S. by Random House/Villard

This book is for my mother, Eleonor Marie

and for Jacqueline West

Special thanks to Theresa Park, Alexandra Greene, and everyone at The Park Literary Group—and to David Rosenthal

E
L CHACAL,
THE JACKAL
, stood on the second tier of cell block one and stared down at the activity on the floor below. In the common area, four inmates were playing a round of bridge. A fifth inmate sat rigid in front of the TV and whispered to Brooke, a regular on
The Bold and the Beautiful
. The jackal sighed; an honest day's labor was rare in this world.

He closed his eyes and silently recited the words of St. Ignatius Loyola. "Teach us, good Lord, to serve Thee . . . to toil and not to seek for rest; to labour and not ask for any reward save that of knowing that we do Thy will."

He turned back to gaze into an open cell. The small square window was already charcoal gray. Each day another two minutes of daylight were lost. It would
keep on that way—getting darker and darker—until the winter solstice.

Day and night, just like his own two selves. He'd grown so used to them, he hardly noticed the transformation anymore. Day getting shorter. Night, longer and longer, ready to take its due.

It was the killing that made him split apart in the beginning. Or maybe the split was the reason he had begun to kill.

Unless you are doing His will.

To labour and not ask for any reward

Save that of knowing that we do Thy will
.

The jackal had been offered a task, but had not even considered it, until the Lord intervened. The Lord said, "Accept the task, jackal, and be rewarded."
His will be done
.

The task was to kill. Not a senseless, selfish kill like some of the men had done, like he himself had done a long time ago. This kill was part of the Lord's divine plan.

On earth as it is in heaven
.

The reward was great: it would become the crowning glory of his work for the Lord.

He sighed and gazed down at the sheet of paper he'd been clutching in his right hand. Things had been going so well.

But then, a snafu. Somebody was nosy.

And now, he had twice the work.

One hit had become
two
hits.

The second name was written in pencil, faint but legible. His own handwriting. Over and over. Just the way the nuns had taught him to write
Be sure your sin will find you out
—on the blackboard one hundred times.

S
YLVIA
S
TRANGE TURNED
from the frontage road that ran parallel with the interstate. From this distance, the building ahead looked businesslike, industrial. Closer, it became what it was, a prison with dirt-encrusted windows and gleaming perimeter lights. On her right, a pockmarked state historical sign announced the Penitentiary of New Mexico, founded 1956.

She approached the intersection going forty, swerved to avoid a jackrabbit, and swore as the Volvo slid to a stop over loose gravel. Scrub chamisa, prickly pear cactus, and occasional soda cans dotted the fields on either side of the road. A lone cottonwood towered over the flat desert landscape. In the distance, the Sangre de Cristo Mountains gave off a dull blue gleam under winter sun. South Facility, medium security, was a quarter mile to her right. On her left, a prison service truck idled by the cutoff to the maximum facility. The driver smacked his lips at her, then lit a cigarette.

She accelerated past the sewage treatment facility, past the fire trucks. Ahead, she could see the entrance to the PNM Main Facility surrounded by heavy link fenc
ing and spirals of razor ribbon designed to slash a man to pieces. She approached it with familiar emotional discord, equal parts apprehension and fascination. Today, her thoughts were colored by too little sleep, too much caffeine. Even on the best days, it was impossible to view the Main Facility without thinking about the nation's most brutal prison riot. In 1980, thirty-three inmates had died—some tortured and mutilated—at the hands of other inmates.

The silhouette of a guard was visible in the window of the large beige tower looming over the prison's entryway. Sylvia stopped at the speaker embedded in a concrete post set in the center of the road.

"State your name and business."

"Park in the lot to your left."

A third of the spaces were filled. She pulled into a slot shaded by a naked cottonwood and facing a trailer with a sign:
FAMILY HOSPITALITY CENTER.
A few flakes of snow drifted down to settle on bare earth.

Sylvia drew her briefcase from the Volvo and locked the doors. Her gray wool skirt had ridden up her thighs as she drove. She smoothed it down to the low edge of her knees and buttoned her burgundy suit jacket.

As she approached the reception outbuilding, she caught sight of her own reflection on the tempered glass. At thirty-four, she was tall, lithe, and moved with ease thanks to the weekly ballet classes she'd hated as a teenager. She had inherited her father's lean limbs and broad shoulders as well as her mother's large breasts. Thick brunette hair grazed the collar of her jacket; she
wore it loose, slightly layered, brushed back from a prominent forehead. Wire-rimmed sunglasses shaded her eyes and intensified the angles and planes of her face. She walked quickly, her heels clacking on the cold asphalt When she entered the building, she was twenty minutes early.

Several correctional officers, stragglers on the morning shift, were clustered in the reception area. The admitting C.O. glanced at Sylvia and immediately refocused. As he slid the sign-in sheet her way, he gave a low whistle. "You a lawyer?"

Sylvia's smile was cool. She was used to male attention, knew how to deal with it, but the rules were different at the pen. She signed her name and noticed her hands were shaky. "Psychologist,'' she said.

He glanced at the sheet. "Strange?" He grinned. "That's strange."

"Yeah, isn't it?" Sylvia smiled back mechanically; since kindergarten, she'd heard every possible pun on her name. Be kind to your local C.O., she thought.

Sylvia recognized the voice before she turned and beamed at a mischievous guard named Leroy. She shook his hand and said, "How's Holly?" Leroy's wife worked as a court clerk at the Santa Fe Judicial Complex.

Sylvia watched him smooth the skin on the ring finger of his left hand. When he gave her a mock salute, she noticed a faint band of white; he'd left the wedding ring at home.

Leroy winked. "You gonna tell us who's crazy in there?"

Sylvia winked back. "Does Holly know you pocket the ring when she's not around?"

Leroy turned bright pink and his buddies hooted. When he regained his composure, he said, "I'll get you for that, Doc."

As Sylvia walked away, she smiled. "I'm counting on it, Leroy."

She felt internal gears shift as she passed through the metal detector, down the short hall, and through the exit. She had crossed into another world.

She waited impatiently in the small concrete anteway while the heavy link gate slid open with a groan of resistance. This was the worst part, the first taste of noman's-land between metal barriers.

A sparrow landed between the diamond-shaped discs of a loop of razor ribbon. The bird chirped before flying off again. Sylvia advanced through the gate and walked toward the doors to Main's lobby. As she glanced up at the two-story fortress, she tried to remember exactly which soot-crusted window was the psych office.

T
HE ROOM WAS
tiny, crammed with filing cabinets and two metal desks. Sylvia set her briefcase on the desk nearest the door. A potted plant was suspended from a web of macrame over a heating vent. Wilted leaves shuddered in the forced-air breeze. A list of phone extensions, in case of emergency, was tacked on the wall. Just in case.

She sat, snapped open her briefcase, took out several pencils, and selected the slim accordion file labeled
LUCAS SHARP WATSON NMCD
#36620. A blue folder contained routine incarceration documents as
well as Watson's main jacket. Date of incarceration: August 28, 1992. County: Bernalillo. Determinate Sentence: 6 years. Crime: voluntary manslaughter. Twenty-one-year-old Lucas Watson had brutally beaten a forty-year-old migrant worker to death in a barroom dispute. Both men had been drunk; they had argued over money. No one had claimed the body of the victim. Watson had served three years of his sentence.

Sylvia wondered what he looked like—no photograph was included in the file—and felt a slight anticipatory edge in her stomach; it was always the same when she met a penitentiary client for the first time. Thank God he wasn't a Death Row inmate; she wasn't up to a terminal case this morning.

The thickest folder was green and included Watson's personal history as well as investigative reports on family members, and statements from employers, even schoolteachers. One fact caught Sylvia's attention: when Watson was six years old, his mother had committed suicide—a .22-caliber bullet through her head.

She skimmed the information and the note Herb Burnett had scribbled on a yellow Post-it. "Dear Sylvia, Glad you can take over for Malcolm. Lucas Watson is up for parole next week. Sorry for the rush job. How about dinner,
chez moi?"

The red folder held a psychological assessment by Dr. Malcolm Treisman, Sylvia's senior associate up until the previous summer when he'd been diagnosed with cancer. Malcolm's death, two weeks ago, had been a blow to family, friends, and associates. It had left Sylvia with the feeling she was ghost-walking, only half present among the living. The fact that
Malcolm had also been her lover sharpened her grief.

The dull ache in her temple spread across her forehead. She had just pulled a bottle of Anacin and a notepad from her briefcase when there was a knock and the door opened. Lucas Watson, accompanied by a C.O., stood framed in the doorway. He was about six feet two and wiry. His blond hair was shaved close to the skull; small scabs were visible beneath the stubble. He moved with shoulders slightly hunched—a taut inmate strut—to reach the chair in front of Sylvia's desk. As he sat, he met her gaze. His pupils were light blue, almost cloudy; they reminded her of someone who had suffered snow burn.

"Lucas." She smiled. "I'm Sylvia Strange." She glanced at the C.O. who had remained in the doorway. "We're okay."

The C.O. fingered his name tag:
ANDERSON.
"If you need me, I'll be outside."

She waited until the door closed before she spoke. "Your lawyer, Mr. Burnett, told me you requested an independent evaluation. Can you tell me why?"

Lucas shifted, hips pressed toward the desk. His tongue slid over his teeth and tiny beads of perspiration were visible on his upper lip. "For the parole board."

Snowed In by Rhianne Aile and Madeleine Urban
Funeral in Berlin by Len Deighton
Magic Kitten: A Christmas Surprise by Sue Bentley
Nobody's Angel by Clark, Jack
Growing Up Twice by Rowan Coleman
No Place Like Home (Siren Publishing Ménage and More) by Diane Leyne
Hardest by Jorja Tabu
Children Of Fiends - Part 2 A Nation By Another Name: An Of Sudden Origin Novella by Harwood, C. Chase
The Ghost Brush by Katherine Govier
Art Ache by Lucy Arthurs
Our partner