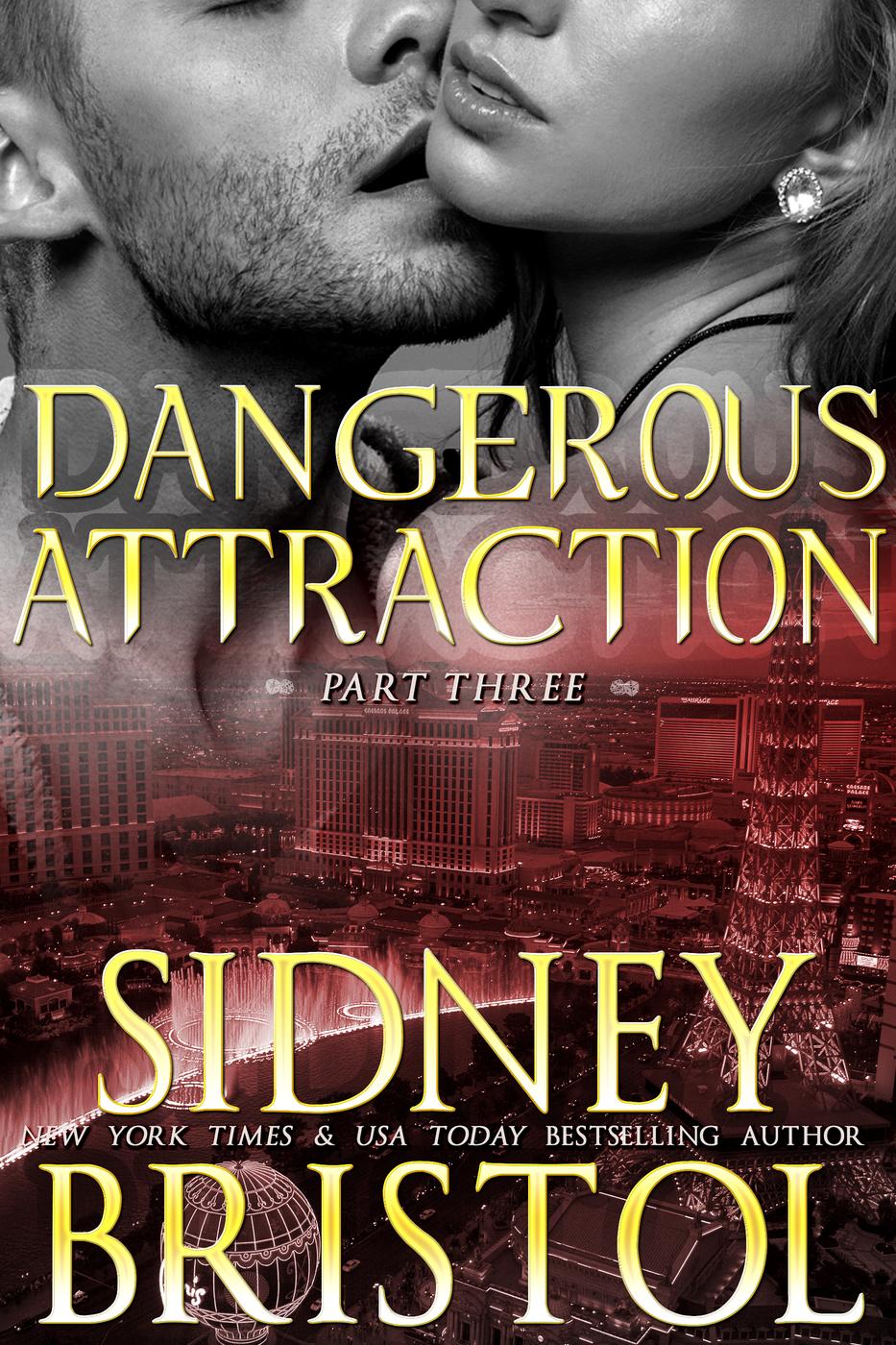 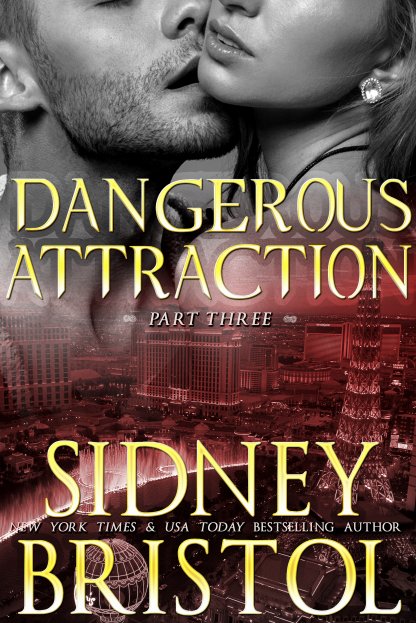 Dangerous Attraction: Part Three | Ex-Navy SEAL Travis Ration has made the mistake of his life and now it's a race against time and a killer to set things right. When he left Bliss Giles heart-broken and in protective custody, he thought he was giving her the freedom to a better future. But his heart says otherwise. Now, he must find the killer before Bliss trades herself for her sister. He's not going to give up the woman who has stolen his battered heart. | The hunters become the hunted in the conclusion of this tale of serial killers and SEALs for hire. A sister will make the ultimate sacrifice and a man must fight for what he believes he doesn't deserve in this romantic suspense serial by NYT & USA Today bestselling author, Sidney Bristol. | For once, everything just might end well. | www.SidneyBristol.com

Only in the agony of parting | do we look into the depths of love.

Find out about the BAU’s other cases, starting with: | Blind: Killer Instincts

Dangerous Attraction: Part Three
Ex-Navy SEAL Travis Ration has made the mistake of his life and now it's a race against time and a killer to set things right. When he left Bliss Giles heart-broken and in protective custody, he thought he was giving her the freedom to a better future. But his heart says otherwise. Now, he must find the killer before Bliss trades herself for her sister. He's not going to give up the woman who has stolen his battered heart.
The hunters become the hunted in the conclusion of this tale of serial killers and SEALs for hire. A sister will make the ultimate sacrifice and a man must fight for what he believes he doesn't deserve in this romantic suspense serial by NYT & USA Today bestselling author, Sidney Bristol.
For once, everything just might end well.
www.SidneyBristol.com
Dayna & Jess,
Thanks for not killing me.
<3
Only in the agony of parting
do we look into the depths of love.

T
ravis hit the ground, rolling and grabbing for the firearm in his boot holster. Every fiber of his body was hyper aware of his surroundings. His left arm burned, and he couldn’t feel his fingers. There wasn’t time to worry about the injury now, not with someone firing a gun at him. Adrenaline fueled his need to survive. Bliss. He had to get back to her. Had to protect her. She wasn’t safe.

He rose to his knees, gun raised and pointed toward the front of the SUV where he’d glimpsed the shooter.

It had to be him. Travis had caught a glimpse of a familiar car. The nagging sense that something was wrong had just started low in his gut, and then he saw the blast of muzzle fire. From there he operated on instinct, dropping to the ground, narrowly avoiding the shot.

How had Daniel found him so fast? Why was he after Travis? What had changed to make him deviate from the plan? Daniel went after the girls and transient junkies.

Pinpricks of pain started in the fingers on his left hand. The good news was he could flex and move the limb, though the ache radiating down from his shoulder meant he was going to be in a world of pain after the adrenaline dump wore off.

An inhuman roar bounced and echoed off the brick walls boxing them in. There was nowhere for Travis to go but through Daniel. This was it. The end. He could finish this right now. Make it so that Bliss never had to worry about the killer ever again.

He crawled to the front of the truck. On a whim, he’d backed into the spot, which meant a faster exit, and a measure of protection for a shoot-out.

Travis crouched behind the rental SUV, the front wheels to his back.

He straightened, sighted his shot, and fired off two rounds. Daniel ducked, and the back window of a car shattered. He was maybe six feet away, out in the open lot. It should be like shooting fish in a barrel, but tremors shook Travis’ arm.

Daniel returned fire, hitting the front of the SUV and the van behind him. Travis ducked behind his truck, his right leg almost buckling. A big piece of glass stuck out from his calf. He didn’t remember getting cut, but adrenaline did funny things in the heat of battle.

Travis circled his truck until he had the brick wall behind him, and the SUV between him and Daniel. He took a breath and then stepped out in the open, aiming at where he expected Daniel to be.

Travis limped around the SUV, gun up, sweeping the lot in case Daniel was hiding. People across the street were yelling, a car alarm was going off, but no Daniel. He’d disappeared.

The florist shop window sported several new cracks. The owner peeked out from around the corner. Travis dug his laminated badge out from his back pocket and flashed it. The badge didn’t have any legal weight besides identifying who he worked for, but sometimes it got civilians moving.

“Call the cops. Tell them Daniel Campbell was here. Do it. Now. Get inside.”

Daniel had meant to kill him. For some reason, he was going after Travis, not Bliss or Wendy. It was a complete and total break from pattern. Daniel was going to be even more desperate now. People needed off the streets, out of his path, or the bodies were going to start piling up even more.

How close was the safe house?

He’d chosen a shop not too far away, but not too close either. The house was maybe a five minute drive.

Daniel could already be there if he had a backup vehicle in the area.

Travis turned and limped back to the truck, pushing the pain out of his mind and focusing on what mattered: Bliss’ safety. Had he just put her at risk?

He should have never left her side that morning.

He’d vowed to protect Bliss, and now he might have just killed her.

Travis turned the key in the ignition, saying a silent prayer. Who knew what was torn up in there after the bullets hit it? The engine roared to life. He blew out a breath and threw the truck into reverse, glad he didn’t have to track down a new set of wheels. With a piece of glass jutting out of his leg and a questionable arm wound, he wasn’t in any shape to hoof it back to Bliss on foot, either.

“Call Ryan Brooks,” he yelled at the Bluetooth.

He pulled out onto the street, cutting two cars off and tailgating a third until they turned out of his way. Steam trickled out from around the hood and the temperature  gauge crept higher. Getting pulled over by a cop might actually be a good thing if he could catch a ride to the safe house.

“Hello, this is SSA Ryan Brooks, if you will please leave a detailed message—”

He jabbed the End Call button on the steering wheel and slammed on the gas. The engine’s muddy roar wasn’t a good sign. The truck was limping along when he needed a sprint.

It could already be too late. He’d walked into Daniel’s hands, and now he could be after Bliss.

Bliss sat on the sofa, mindlessly staring at the TV. She was numb to it all. Her life was done with, at least as she’d known it. And Travis was gone. The cops had already told her that the paperwork for Witness Protection was being pushed through despite the holidays, and that meant that in twenty-four hours Bliss Giles would cease to exist. She’d become someone else. A stranger. None of it mattered anymore.

Was this how it felt like for Wendy? Was this depression? She’d always fought her way through the tough times, determined to make things better but now... It wasn’t worth it. Travis had made that clear.

A man had never meant so much to her before. She’d never allowed them to, if she were honest with herself. Nice guys fit into a box in her life, one where she still had time and attention to pick up the slack for Wendy. But a guy like Travis? He would demand everything she had. He readjusted her priorities, shown her what she could have with a man who deserved to be the love of her life. But clearly she wasn’t important enough to him.

She flipped the channel again and couldn’t muster the energy to care when the news popped on with a special update in the Daniel Campbell case.

He was her personal nightmare. Her kidnapper and tormenter. The man who wanted her to have babies he could torture to death. She couldn’t even wrap her mind around it, and quite frankly didn’t want to try. Soon, there wouldn’t be a Bliss for Daniel to kidnap. She’d have a new identity, hopefully one he couldn’t track.

The back door creaked.

An electric-like current of adrenaline raced down her spine. She sucked in a deep breath.

She could barely hear the light steps of the intruder on the linoleum. Her whole body was frozen to the sofa, tracking a single person’s steps into the kitchen. In her head, she could hear the echo of Daniel’s steps on the metal floor inside the RV. They’d been so loud and heavy, and she’d been sure she was about to die.

Fuck this gloomy shit, she wanted to live.

She wrapped her hand around the Taser tucked between the cushions at her side. It wasn’t much in the way of protection, but she would go down fighting this time.

“Bliss?”  A young man wearing sweatpants and a hoodie stepped out of the kitchen, a police badge in hand.

She sagged against the cushions in relief.

All the tension left her body and she slumped against the cushions. Would it kill him to knock?

“Who are you?” she asked. There was no way she could keep them all straight, but she tried. These were the men and women she owed her life to, now.

“I’m Marcus. I live on the other side of the fence.”

“Oh. Right.” She blew out a breath. Travis had told her about the officer stationed behind the safe house tasked with keeping an eye on them. He and two officers positioned in cars at either end of the street were the entirety of her protective detail now that Travis was gone. Without him there, it didn’t feel like enough.

“I’m going to have to ask you to get your things together.”

“Why? What’s wrong?” His expression was too tight, his smile fake. Her stomach clenched. “What happened to Travis?”

“Ma’am, I don’t know. Last I heard he was getting on a plane. Will you please get your things together? We need to move you. Now.”

She could demand answers, or she could grab her bag and get the same answers on the way to wherever they were taking her.

Bliss opted for taking the stairs two at a time up to the room she’d shared with Travis. She could still smell him in the sheets and her clothes. Even a shower hadn’t washed him off her. He branded her body and soul as his, then left.

Now wasn’t the time for sad, mopey thoughts. She’d been captured by Daniel once and that was an experience she didn’t want to repeat. She grabbed her blue duffle bag off the dresser, tossed on a jacket, and was back downstairs in less than five minutes.