Dangerous When Wet: A Memoir 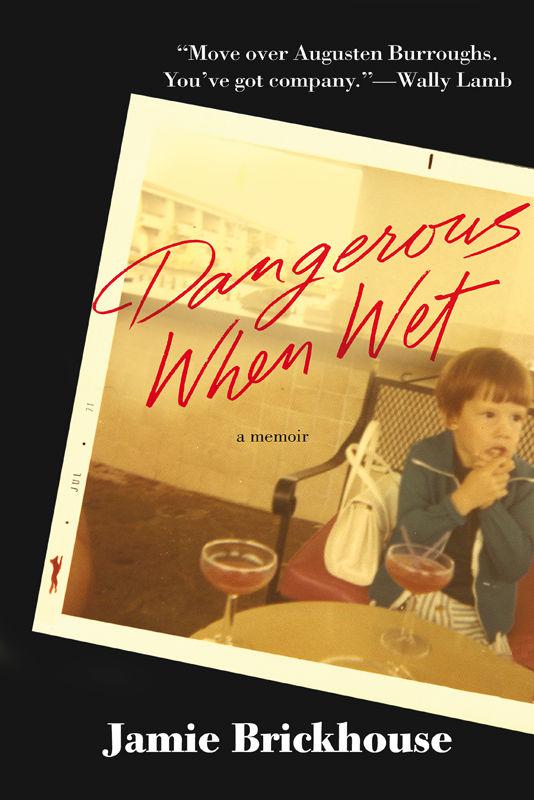 For Mama Jean, who wouldn’t have it any other way

Allow me to raise a glass (some habits die hard) to family, friends, and colleagues without whom I’d still be soaking wet and swimming in a sea of words in my head, not on the page.

My common-law husband, Michael “Michahaze” Hayes, who lived through most of it and he’s
still
here. I love you.

Dad, who collaborated with Mama Jean to make me the man I am today and not only gave me his love and blessing to publish this book but gave me the opening line of this book. My brother Jeffrey for being my third parent and for all he did for Mama Jean at the end. My brother Ronny for just being Ronny and for calling me Pank.

My literary agent, Lisa Gallagher, who believed in the book ever since that fateful lunch at Le Veau d’Or and found the perfect publisher for it at St. Martin’s Press. My talented editor, Charlie Spicer, whose passion and enthusiasm combined with his keen and ruthless editorial hand made this the best book possible. The peerless team at St. Martin’s Press: Sally Richardson, Jennifer Enderlin, Jeff Capshew, Brian Heller, Tracey Guest, Laura Clark, James Sinclair, Meg Drislane, Steve Boldt, Elisa “Legal Lisa” Rivlin, and Brittani Hilles. Special toasts to Michael Storrings for the marvelous jacket design, Jessica Lawrence and Joanie Martinez for launching the book, and April Osborne for her editorial support. Also photographer and friend George Anttila for the courage to take my picture.

Robert Allen and Mary Beth Roche and their marvelous team at Macmillan Audio—Brant Janeway, Samantha Edelson, Chealsea Pita, and Laura Wilson—for publishing the audio edition and letting me narrate it.

My writing teacher, Phyllis Raphael, whose rare gem of a workshop was the incubator for the book. By merely saying to me early on, “You need to be pushed,” she pushed me. She also gave me invaluable editorial guidance outside of the workshop. Workshop peers, talented writers, and friends Kevin Brannon, Maia McCann, Wesley Usher, and Bruce Ward.

The superb writers Henry Alford, Josh Kilmer-Purcell, Wally Lamb, Eric Marcus, Paul Rudnick, and Neil White for blessing the book with their sparkling words; Will Schwalbe for being an early cheerleader and champion; especially Mary Karr, who not only gold-dusted the book with her endorsement but told me early on to “keep writing.” Those two words were as powerful as rocket fuel and helped me enormously to “bring up a book.”

My “analysts,” the late and deeply lamented David “Dave” Eliseo (Helen Lawson thanks you) and the ever-present Dr. Anthony Demma (Blanche thanks you).

Three cheers and special toasts to close friends: Jason Brantley for always laughing at my jokes when others didn’t; David “Big Daddy” Collins for being my first “real” reader; Stella Connell, who is always ready for a “sip ’n see”; David Cobb Craig, aka “DCC,” whose taste and editorial precision devastate me; Nicole Todack Cubbage, who is my first and bestest BFF; Michael “Bunny” Hill for the first triage; Kevin Johnson for being a mentor; intervention angels Jennifer Naparstek Klein, Smith Patrick, and Janine Tiago; Allyson Hancock Kinzel, who predicted all of this when I didn’t believe it; Hedda Lettuce and Steven Polito, both of whom—bald or be-wigged—can always make me laugh; Mama Jean’s friends and mine Dottie Crane, Nancy Dryden, Joan Gilliam, and Sissy Park; Jo Ann Miller for never turning her back on me when others did and for introducing me to Phyllis; John Murphy for being the first to show me a new way of life; Yann Samuels for the second triage; Keith Seabolt for his boundless generosity; Bob Stack for being the first to show me
how
to live a new way of life; Michael “Mr. Parker” Stainback for loving me “wet or dry” and reminding me that in writing this book “everything’s at stake”; Debbie Stier for paving the yellow brick road out of the corporate forest; Warner gals Diane Ekeblad, Ellen Herrick, Patricia Keim, Kelly Leonard, Hera Marashian, and Karen McDermott; Stephen Wilder for introducing me to Cherry Grove; and Karen Wolny for telling me that Liz recognized the potential in me.

A final toast to that invincible bunch: my fellow alcoholics in and out of recovery (especially the Marybills), HIV-positive folk, suicide-attempt survivors, and people affected by Lewy body dementia.

To all of you, I take “a cup o’ kindness yet for auld lang syne.”

My father, brothers, and I each had our own deep, complex, and loving relationship with my mother, Mama Jean. This book is the story of my relationship with her told through the lens of my love affair with alcohol, the other dominant relationship in my life. Hence, my father and brothers often have only cameos here, but in the cast of our family they each had as big a supporting role as I did to Mama Jean, the star of our lives. Some of the names and places have been changed.

Whoever said you can’t get sober for someone else never met my mother, Mama Jean. When I came to in a Manhattan emergency room after an overdose to the news that she was on her way from Texas, I panicked. She was the last person I wanted to see on that dark September morning, but the person I needed the most.

“She doesn’t need to know about this,” I told my brother Jeffrey, who sat in a dark corner of the room. “Call her. Stop her before she gets on the plane.”

There was no stopping Mama Jean.

At thirty-eight I had been living in New York City for sixteen years, almost as long as the time I spent growing up in little ole, flat-as-a-flitter, hot-and-steamy, oil-refinery-oasis, cancer-capital Beaumont, Texas. Beaumont is a southeast Texas port town on the banks of the muddy-brown Neches River with the smaller towns of Port Arthur and Orange, not far off of I-10. The Golden Triangle, this triumvirate of towns is called. With the corrosive winds of the Gulf (“guf”) of Mexico a mere thirty miles away, Rusty Troika is a better name. Pardon my dust, but I fled that backwater to New York City, where I had carved out a successful career in book publishing with some fancy executive-vice-president titles, alongside my architect boyfriend, Michael Hayes, or Michahaze, as he was known in our circle. “I am going to get sophisticated if it kills me,” I loved to say, throwing back a martini, Beefeater gin, dry, up, with a twist. I was quoting a line from one of the many old Joan Crawford movies that taught me how to be glamorous and sophisticated. And it nearly did kill me.

I didn’t need Mama Jean in the middle of this mess. I could imagine how she’d greet me. “God …
damn
it!” Her
goddamn it
was said with a pregnant pause after
god
that left the object of her scorn bracing for the explosion of
DAMN it!
“I knew you’d end up like this. I just knew it.” I was tired of being in the red with her. The cars. Trips to Europe. College. The apartment.

I moaned at the thought and ran my hands through my copper-red hair, which was fading along with my looks. With an expressive oval face, and nearly six feet of skin and bone, I had never been handsome, but musical-comedy cute—the sidekick, not the lead—all bow ties and polka dots. Had there been a mirror and I’d had the courage to look in it, that’s not what I would have seen. Gin-soaked at thirty-eight, my puffy complexion was redder than my hair, which was dissolving to a dull auburn, and my lanky frame didn’t want to carry the yeasty dough I had poured on the middle. The lights in my brown eyes were off.

“Where’s Michael?” I searched the gloom of the windowless room, lit only by a slash of jittery fluorescent hall light, for my Michahaze. We had been together almost as long as I’d been in New York, and he had never left my side despite all of my peccadilloes.
Did he get me here?

“He left about an hour ago.”

Big relief. I couldn’t hide my drinking from her anymore—
have I ever been able to?
—but she didn’t need to know
all
my secrets.

Lying on an emergency-room gurney, my primary concern wasn’t who or what got me there. Well, I knew
what
got me there: the overdose of sleeping pills I’d taken the day before in my own bed—a clich
é
straight out of
Valley of the Dolls.
The prescription on the pill bottle read “Take as needed.” I followed directions
.
All of that I could figure out later. I was worried more about what Mama Jean—my greatest champion and harshest critic—would say. I was still in denial—Jesus, I was barely conscious—but I was about to face the two most important relationships of my life: booze and Mama Jean.

I could never predict what was going to come out of her mouth. Had I been able to read her mind, I would have known, because whatever thought went through her mind was the next thing she said. Mama Jean could have had a great career in silent pictures. Anyone peering through a window into her house would instantly have known what she was feeling by watching her histrionic gestures, which were as broad and iconic as those of her favorite soap-opera stars. With her raven mane, which was always done to a tease, and her Rubenesque figure, her looks were reminiscent of Elizabeth Taylor’s. She had the split personality of Auntie Mame and Mama Rose. She was every inch the star: self-made, image obsessed, demanding, with the patience of a firecracker, makeup camera-ready, and almost always in close-up. Like the quintessential Leo she was, her roar could be loud and fierce.

One Good Turn by Judith Arnold
Dead Unlucky by Andrew Derham
Stay by Larkin, Allie
Tallgrass by Sandra Dallas
Hunting Evil by Carol Lynne
The First Crusade by Thomas Asbridge
Knight in the City: A Zombie Apocalypse Survival Tale by Beard, Stephen J.
Meet Your Baker by Ellie Alexander
Universe in Flames 3: Destination Oblivion by Christian Kallias
The Demise of Guys: Why Boys Are Struggling and What We Can Do About It by Philip G. Zimbardo and Nikita Duncan
Our partner