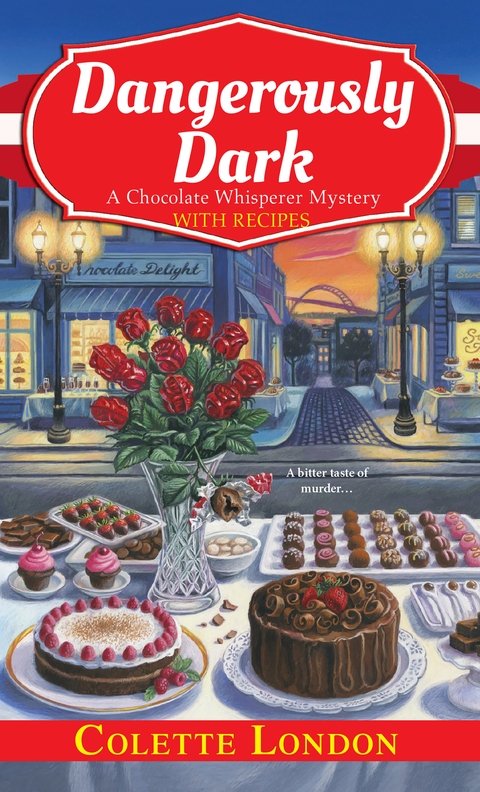 ICE CREAM, YOU SCREAM
You would think that once you've stumbled upon an honest-to-God murder, you'd be prepared for anything, right? No matter how ghastly or unlikely. But I wasn't prepared for what greeted me inside Carissa's Airstream trailer. I wasn't prepared at all.
I vaulted inside, heart pounding, and glimpsed Carissa collapsed on the floor. She seemed to have fallen on top of . . .
something
. Something bulky and long. Bags of sugar, maybe?
Trying to see what it was, I edged closer. I couldn't see clearly, though. A ghostly vapor filled the space where Carissa kept her equipment and inventory, partly obscuring my vision.
Plus, I felt downright woozy. Short of breath, too. Spots swam before my eyes. I was terrified a homicidal maniac might burst from a dark corner at any moment. After all,
someone
must have gotten in here. On the alert for a potential attacker, I blinked and moved closer, shivering from the chill. It was as if the Airstream was refrigeratedâand now so was I. Shakily veering from side to side, I tried not to think of haunted houses and horror movies, dead bodies and killers lurking in the shadows.
It didn't work.
Murder
was all I could think of.
“Carissa!” I crouched beside my unmoving friend. I touched her limp arm. I peered at her face. Her stillness scared me.
A faint hissing sound filled the trailer. My raspy breath overrode it. I was freaked out and not afraid to admit it. At least now the mist was subsiding. That meant I could see.
In that moment, I almost wished I couldn't.
“Carissa?” Gently, I tried to jostle her, feeling on the verge of tears. I'm not a crybaby, but these were extraordinary circumstances. I swallowed hard. “Carissa, are you okay?”
Books by Colette London
Criminal Confections
Â
Dangerously Dark
Â
The Semisweet Hereafter (coming soon!)
Â
Â
Â
Published by Kensington Publishing Corp.
Dangerously Dark
COLETTE LONDON

When I Kill You by Michelle Wan
Murder, She Wrote by Jessica Fletcher
Silent Slaughter by C. E. Lawrence
Secrets in a Small Town by Kimberly Van Meter
Netherworld, Soul Guardians Book 4 by Richardson, Kim
Monkeewrench by P. J. Tracy
Along Came A Prince by Carlyn Cade
The Complete Arrogant Series by Winter Renshaw
Deluxe: How Luxury Lost Its Luster by Dana Thomas
Your Man Chose Me by Racquel Williams
Our partner