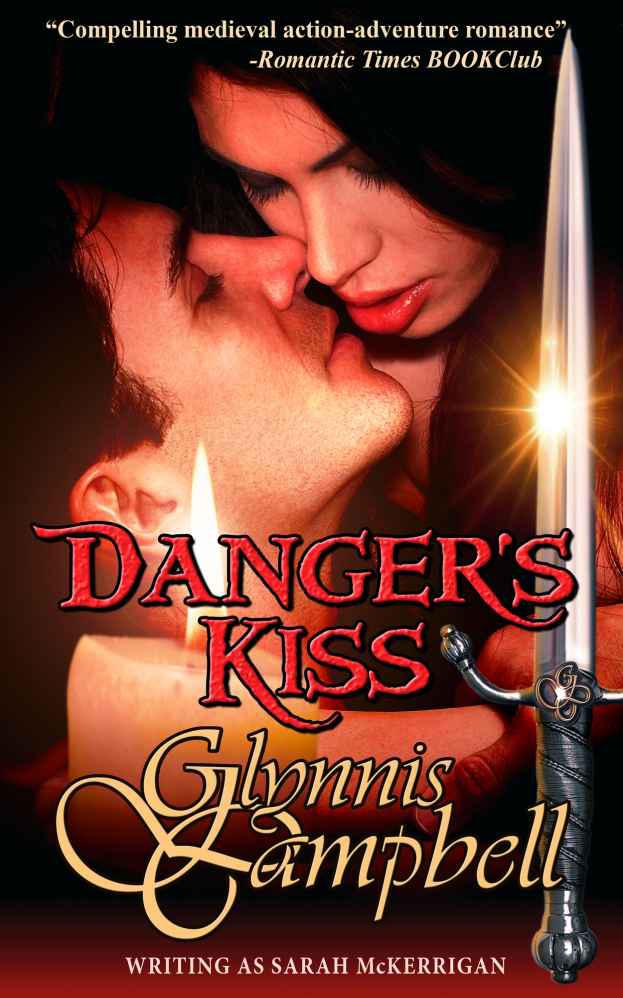 A thief by trade, Desiree of Canterbury can squirm out of any tight spot with a wink and a smile...until she meets her match in Nicholas Grimshaw, the most feared lawman in the shire. After Nicholas is forced to execute her guardian, he is honor-bound to care for Desiree. But Desiree may be the death of him yet, disrupting his orderly life until he doesn’t know whether to kiss her or kill her. Just when she decides to let him make an honest woman of her, a ruthless enemy rears its ugly head, and Desiree and Nicholas must use all their wiles to escape danger, cheat death, and save their newfound love.

Table of Contents
A will of her own...

“You’re not sleeping in my bed.”  He started toward the door.

“But I was there first!”

“You weren’t using it.”  She actually wedged her limbs in the doorway, trying to prevent his exit.

He didn’t feel like arguing the absurdity of a tiny lass expropriating his huge bed while he lay cramped on a small pallet by the fire.

“The only way you’re sleeping in that bed,” he whispered wickedly, “is if you’re sharing it with me.”

This work is a work of fiction.  Names, places, characters and incidents are the product of the author’s imagination or are used fictitiously. Any resemblance to actual events, locales or persons, living or dead, is coincidental.
Copyright © 2008 by Glynnis Campbell
E-book Copyright © 2012 by Glynnis Campbell
All rights reserved.  No part of this book may be reproduced in any form or by any electronic or mechanical means, including information storage and retrieval systems, without permission in writing from the author, except by a reviewer who may quote brief passages in a review.
Book design and illustration by Richard Campbell
eBook ISBN-10: 1938114090
eBook ISBN-13: 978-1-938114-09-0
Glynnis Campbell – Publisher
P. O. Box 341144
Arleta, California  91331
Contact:[email protected]

For my dear friend and fellow author
Lauren Royal—

For offering the best advice
and, when all else fails, her shoulder...
For sharing laptop plugs
and tangled plots and Piesporter...
And for always knowing exactly what to say.

T
he bells of Canterbury Cathedral tolled unexpectedly in the distance, startling the traveler who trudged irritably toward the town.  The dull ringing, muffled by the snow, still managed to breach the icy silence to deliver a message as chill as the wintry wood.

Desirée stopped in her tracks, squinting through the falling snowflakes.  She’d wasted the last several hours, waiting in the harsh cold for a man who’d never arrived, and she was in no mood for surprises.  Her skirts were soaked.  Her feet were numb.  And her mood was ugly.

Suddenly, the rhyme Hubert had recited six years ago, when he’d first taught Desirée the fine art of thievery, sprang to mind.

Bells on the Sabbath are an outlaw’s curse,

It wasn’t the Sabbath.  The bells could mean only one thing then...a public execution.  And where there was an execution, there was a crowd of distracted onlookers, easy prey for a nimble-fingered thief like Desirée.

Or, she reflected, for a sly old fox like her longtime mentor, Hubert Kabayn.

Desirée frowned.  Had Hubert
known
there would be an execution today?  Was that why the greedy sot had sent her away?  So he could take all the spoils himself?

“Hubert Kabayn, you backstabbing son of a...”  Her oath of fury fogged the frigid air like dragon’s breath.

She picked up her wet skirts and slogged angrily forward, cursing the conniving old cheat with every step.  There certainly was no honor among thieves.  She would do well to remember that in future.

Hubert had deliberately ordered her away this morn, sending her on what she now realized was a fool’s errand.  He’d told her he needed her for an important task.  Since he was locked up in the town gaol at the moment, the old thief wanted her to conduct a piece of business for him.

She was to meet a man at the ruined bridge south of town, a man who owed Hubert three shillings.  With her accomplice in crime out of commission for the last week, coin had grown scarce, and Desirée had been only too eager to comply.

She kicked at the new-fallen snow.  How could she have been so gullible?

She’d waited at that cursed bridge for hours.  No one had come.  And now she realized there’d never been a man at the bridge.

She should have known better.  For weeks now, Hubert had been trying to get rid of her, pushing her away like an unwanted pup.  He’d growled at her that she was losing her light-fingered touch, that at nineteen, she was too old to be of use to him anymore.  He’d snarled at her to quit pestering him, to leave the thieving trade, to seek work as a lady’s maid or perhaps trick a wealthy merchant into marrying her.

But this...this was the ultimate betrayal.  Hubert had no doubt managed to slip the gaoler’s bonds and was circulating among the crowd even now in one of his guises, cutting purses that he had no intention of sharing with her.  Indeed, it was likely his plan to give Desirée the slip ere she returned.

She ground her teeth.  Hubert might have taught her all the tricks of his trade, but her tenacity was her own.  The crafty old bastard wouldn’t get rid of her that easily.

By the time she found her way to the town square, a sizeable audience had already gathered, huddled against the bitter cold.  But for once she wasn’t tempted by the dangling purses and gaping pockets.  Instead, she scanned the onlookers for signs of a figure making his stealthy way through the crowd.  He might resemble a ragged beggar or a distinguished noble or even a withered old crone.  But Desirée would recognize the artful trickster anywhere.

Indeed, so engaged was she in seeking out the traitor, she paid no heed to the poor soul being led to the gallows.

By the time she spared him a glance, it was too late.

Across the crowded square, a damsel’s scream pierced through the falling snow.  “Nay!”

Nicholas flinched.  Bloody hell.  As the shire-reeve of Kent, it was his duty to preside over executions, but it had been so long since the last one, he’d forgotten that sound
—
the sound of desperate feminine grief.  And now he was certain that even the several pints of ale he intended to quaff afterward wouldn’t erase it from his memory.

He steadied the shivering old man he was walking to the gallows, who’d faltered at the unearthly wail.

Why did women have to scream at executions?  God’s bones, all men had to die, whether it was by battle or sickness or the hangman’s hand.  At least this way a condemned man’s wife or mother or daughter could pay her respects and pray for his soul.  And the lucky bastard wouldn’t die alone.

Still, no matter how Nicholas tried to justify the man’s execution in his mind, administering death never sat well with him, even when it was deserved.  And in this instance, he wasn’t sure it
was
deserved.  Still, the man had refused to fight the charges, not that it would have done much good.  When it was a common thief’s word against that of the wealthiest noblewoman in Canterbury...

“You son of a whore!” the maid cried over the murmuring crowd.  “You’ll rot in hell if you hang him!”

Nicholas ignored the threat, grumbling low to the victim, “She’s only frightened.  But you have no cause to be.  Remember what I told you.”

Hubert Kabayn, condemned murderer, nodded, taking strength from the reminder that Nicholas had assured him of a swift and painless end.

Death was never the difficult part for his victims.  Nicholas saw to that.  He used only the most efficient executioners, refusing to let men suffer on the gallows, no matter what the bloodthirsty crowd wished.

But this, the final walk through the village, was the real torture.  And it was caused by more than just the inevitable wench screaming in despair.

The Case of the Horrified Heirs by Erle Stanley Gardner
Ceaseless by S. A. Lusher
Those Across the River by Christopher Buehlman
The Apartment: A Novel by Greg Baxter
Strike for America by Micah Uetricht
Between the Living and the Dead by Bill Crider
My Forbidden Desire by Carolyn Jewel
The Boy Detective Fails by Joe Meno
Bewitched by Lori Foster
Judgment Day -03 by Arthur Bradley
Our partner