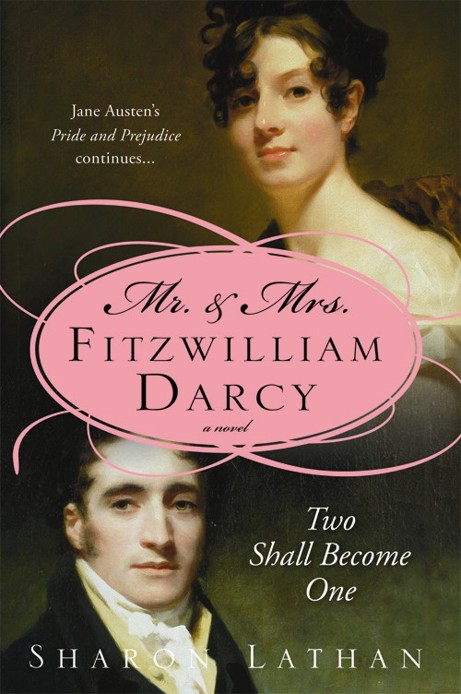 Two Shall Become One

All rights reserved. No part of this book may be reproduced in any form or by any electronic or mechanical means including information storage and retrieval systems--except in the case of brief quotations embodied in critical articles or reviews--without permission in writing from its publisher, Sourcebooks, Inc.

Mr. and Mrs. Fitzwilliam Darcy: Two shall become one: Pride and prejudice

6. Settling in at Pemberley

7. A Stroll in the Garden

11. A Surprise for Poor Samuel

O
VER
T
HANKSGIVING WEEKEND OF
2005 , I entered a movie theater with my best girlfriend and teenage daughter to watch
Pride & Prejudice
starring Keira Knightley and Matthew Macfadyen. My only expectation was to enjoy a sappy chick flick with two of my dearest women friends. I had never read the classic novel by Jane Austen, nor had I seen any of the previous adaptations.

To my stunned amazement, I walked out of that theater sporting a heart swelling with romantic sentiment and warm fuzzy feelings running amok, and I was soon to embark on a pathway that would change my life. Within two months, I had joined the ranks of fan fiction writers from all over the world who have adored this timeless tale of true love. I have since read the novel and seen a few of the previous adaptations, but my heart remains enamored with the recent movie and the incredible actors and actresses who brought these delightful characters to life.

My personal quest was to delve realistically into the Regency/Late Georgian Era of England in the early 1800s while exploring the future of the Darcys. It began as a lark, but in true Mr. Darcy fashion, I was well into the middle of it before I recognized what I had begun. Quite before I turned around, I had my own website and was reaching the one-year anniversary of their wedding with fifty-plus chapters under my belt. Yes, it is an obsession!

What I have strived to recount is a marriage in its purest embodiment: a union based on commitment, equality, passion, friendship, honesty, and love. I wanted to answer the timeless questions regarding happily-ever-after and how two individual people meld into one soul. Along the way there are humor, drama, friends, family, and life events to experience with the lovers.

The Darcy Saga, in its entirety, is about how two people who are bonded and committed to each other move through life. That is the plot, the theme, and the essence of the story. They are not the same people once they have each other.

This first novel deals with the initial days into weeks, ending with five months of wedded bliss as the family prepares for the Season in London. I do not rush, as I want the reader to share in the joy of new love as it blooms and alters and strengthens William and Elizabeth. Subsequent novels will travel further along the timeline of life.

Welcome to Pemberley, and thank you for taking this journey with me.

Col. Richard Fitzwilliam
: 31 years of age; cousin and dear friend to Mr. Darcy; second son of Lord and Lady Matlock; stationed with a regiment in London

Edward and Violet Gardiner
: uncle and aunt of Elizabeth; reside in Cheapside, London

Henry Vernor
: family friend of the Darcys; residence is Sanburl Hall near Lambton, Derbyshire; wife is
Mary
, daughter is
Bertha

T
HANK GOODNESS IT IS
finally over,
Fitzwilliam Darcy thought with a heavy sigh.

He realized that he probably should not entertain such a thought, but it could not be helped. The past eight weeks of his engagement had held many wonderful moments and all in all had been delightful, but also exceedingly trying. Daily he wanted nothing more than to spend time with his beloved Elizabeth. However, the constant pressures of wedding plans, visits from a seemingly inexhaustible quantity of friends and family, constraints of propriety, and business interests that had taken him from Hertfordshire on several occasions all had conspired to separate him from her far too often. Add to that his own uneasiness with all the social engagements, not to mention his continued distaste for Mrs. Bennet, and the weeks had seemed interminable.

Nonetheless,
he thought while gazing lovingly upon his sleeping wife
... my wife!... There certainly were some marvelous times to be remembered.
In truth, he and Elizabeth had managed to pass numerous satisfying hours together alone, or at least almost alone, yet it never was sufficient as far as Darcy was concerned. She had teased him on occasion for acting like a petulant child whose favorite toy had been taken away. Initially, he had been a bit offended, but then he realized she was correct and had to laugh at himself. Yet he could not deny how bereft he felt without her by his side and how he had treasured every moment that they were together, even if it was brief.

They discovered, much to their mutual joy, that the trials of the previous months, during which each had suffered tremendously, had brought them to a place of complete understanding and honesty. The conversations they now shared were open, deeply profound, intimate, and blessedly free of all artifice and misunderstanding. He had revealed himself to her as he never had to any living soul, not even to his sister or dear Cousin Richard. She had done the same.

The Super Spies and the Cat Lady Killer by Lisa Orchard
Murder Is Secondary by Diane Weiner
Little Chicago by Adam Rapp
Trouble on His Wings by L. Ron Hubbard
An End to Autumn by Iain Crichton Smith
Hunger (A Stepbrother Romance Novel) by Abbing, Arabella
Fate (Choices #2) by Lane, Sydney
Heiress for Hire by Erin McCarthy
Sassy's Studs by Dakota Rebel
The Moon in the Palace (The Empress of Bright Moon Duology) by Weina Dai Randel
Our partner