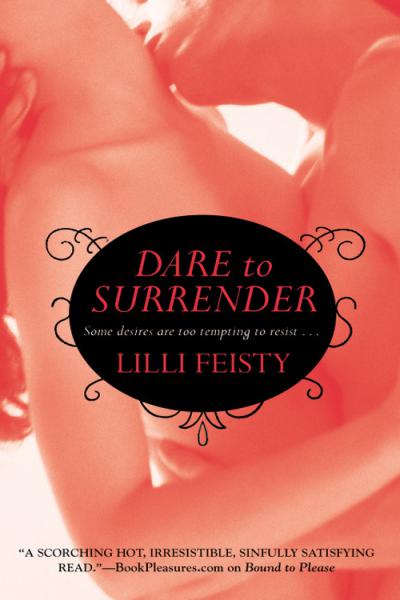 “You’re so different, Joy. Different from any girl I’ve been with.”

She lifted her chin. “Is that good or bad?”

He kicked off his boots and pulled his shirt over his head. Her gaze landed on his chest. He was all muscle. So unlike her
own curvaceous body.

In any other circumstance she would have probably run away, her insecurities taking over as she looked at a man so hard, lean,
and powerful. But she was too turned on; her body needed him, and as he pulled off his jeans and boxers, she could see he
needed her, too.

His hands on her thighs were rough as he lifted her and pushed her against the wall. She couldn’t help but notice that he
picked her up with no visible effort….

He carried her to the top floor, walking straight to his bedroom and resting her on the bed.

Then he kissed her and smiled down at her. “I want you to stay here tonight.”

Praise for
Lilli Feisty
and
Bound to Please

“Terrific… Fans of realistic erotica will enjoy
Bound to Please
.”

I would like to thank my wonderful editors, Amy Pierpont and Alex Logan. Also, my agent, Roberta Brown, deserves a big hug.
My Smutketeers, my family, and all of my friends—thank you for helping me write during a very difficult year. And Dana, thank
you for always picking up the phone.

H
alf of being successful was luck, right? So, as she entered the elegant surroundings of the museum fund-raiser, Joy Montgomery
prayed she was about to get lucky.

Scanning the crowded, oversized room, she searched for a blond man with green eyes to die for and a long, lean body she would
never forget.

There, in the corner!
Her gaze landed on him and her breath caught. He was more gorgeous than she remembered. He held himself away from the crowd,
which seemed to fade away when he caught her eye for just a second before a group of guests blocked her view.

A petite brunette came toward her. “Joy! I’m so glad you made it!” she said, and gave Joy a hug.

“Wow.” Joy looked around the third floor of the San Francisco Art Museum, the atrium of which had been reborn into a reception
hall for the year’s biggest fund-raiser. The walls were adorned with the museum’s best pieces from their collection, and the
high ceiling opened to the night sky. The large space echoed with conversation, making it difficult to hear.

“So, I see he came.” Joy eyed the tall, lanky photographer, trying to ignore the way her heartbeat seemed to speed up whenever
she looked at him.

Ruby Scott, event planner and the neighbor Joy had come to know and love, looked in Ash’s direction and frowned. “Yeah, I
have to say I’m shocked. He quit his photography, despite the fact that this museum wanted to do a show for him.” She shrugged
her petite shoulders. “He just seems lost somehow.” She brought her attention back to Joy. “And it’s such a shame he’s not
taking photographs now. He was really on the brink of something amazing.”

Joy blinked. “Pardon me? What do you mean he’s not taking pictures anymore? I don’t understand.”

“Who really knows? Artists can be so unpredictable.”

Shit shit shit!
Joy had banked on Ash’s being here, and he was. But if he wasn’t taking photographs anymore, how was she supposed to lure
him to the gallery she worked for? Her boss had told her to find an up-and-coming artist, someone edgy. There was nothing
edgier than Ash Hunter’s sexy photographs.

“If he’s not taking photographs, what’s he doing?”

“Not teaching anymore, I know that. He used to be in the Navy. I’m wondering if he’s considering returning to security.”

“He doesn’t look like security.” Joy took in his faded jeans, T-shirt, leather jacket, and black boots. His dirty blond hair
was too long, and he looked like he hadn’t shaved in a day or two. He looked like… an artist.

Ruby shook her head in his direction. “I know. But I think it’s in his blood. He’s not happy unless he’s on the go, and he’s
been in town ever since…”

Joy turned back to Ruby. “Since what?”

Smiling, Ruby shook her head. “Never mind. Anyway, apparently he was quite the hero in his day. Not that he’d ever admit it.”

Conveniently, a waiter happened to be passing by with a tray of champagne glasses. Joy plucked off two flutes and downed one,
then looked up to find Ruby staring at her, her face tilted, her blue eyes questioning.

“No,” Joy said, waving her now-empty flute in Ash’s direction. “My boss wants him—his art, I mean—as an exclusive for the
Cartwright Gallery. If I don’t come back with some sort of agreement, I’ll probably be fired.”

“They can’t fire you for that!” Ruby said. Though her slight frame appeared relaxed, Joy saw that the woman’s gaze never rested
anywhere for long. She was constantly taking in the environment, watching for any possible detail that might be less than
perfect.

But everything was flawless. From the display of a light show on the far wall to the smoked salmon canapés being passed by
a waitstaff that seemed to be made up of supermodels, every last detail had been immaculately attended to.

Ruby Scott was the epitome of detail-oriented. Joy Montgomery was, in a word, not.

“Listen, sweetie. I have to get to work, but we’ll talk about this later—I promise we’ll think of something! Right now, don’t
worry about it. Just enjoy yourself.” Ruby took Joy’s empty glass and flitted off to consult with the caterer.

Joy watched her go, her slim body fitted into an impeccably tailored dress. She wondered how one became detail-oriented, a
perfectionist. Joy was a lot of things, but none of those traits were on the list. She could have finished off another degree
with the cumulative time she’d spent looking for her keys, she never remembered any of her three brothers’ birthdays, and
she was always late to work.

And she never seemed to be able to put together an outfit with the flair that some women, like Ruby, naturally seemed to possess.

Like tonight. The flowery dress had seemed an appropriate choice when Joy had pulled it out of her closet earlier that evening,
but now, in a sea of black fashion, she shifted awkwardly on her flats, feeling very out of place in the bright fabric. Also,
unlike most of the other women at the event holding tiny clutches, Joy had her ever-present oversized bag slung over her shoulder.
But she had a panic attack if she went anywhere without it. The bad thing was, she tended to collect random miscellanea along
the way. Every few weeks, she dumped the contents of the bag onto her bed and was always surprised at how much crap she’d
managed to shove in there.

Sighing, she turned her gaze to the paintings on the wall. The gala was a reception for a big museum fund-raiser, but no one
except Joy seemed to be appreciating the wonderful collection displayed around them. Like that piece on the far wall. Her
gaze fell on a vivid abstract and she found herself moving forward, drawn to it. The dazzling colors calmed her; the flowing
composition soothed her. Stopping a few feet from the piece, she uncurled hands she hadn’t even realized had been clenched
and stared.

Joy snapped herself into the present. She’d been so lost in the art that the room had faded, and she hadn’t noticed Ash approaching.
Now he stood next to her, but he wasn’t looking at the painting. He was looking at her, his eyes intense, unblinking, and
the most beautiful shade of green she’d ever seen—tinted emerald as if laid directly from an artist’s palette—

Shit.
Every time she started describing a man in art terms, she knew she was in trouble. What had she said about Cartwright? Oh,
that the shadows of the sharp features of his face were like a study in chiaroscuro.

She pulled her bag tighter and nodded. “Yes. It’s, um, very moving.”
Really intelligent, Miss Art History Major.
And it was then that she remembered Ash was an artist himself and was probably thinking she was incredibly dull.

At least, he used to be that man. Now it seemed he was just tall and sexy, and she had no idea about the kinky.

She experienced an urge to find out.

“Joy, right?” he said, and she discovered his voice was still scratchy and deep, just as she’d remembered from the one time
she’d met him outside her building. She’d been late for work and had burst outside, slamming the door right into Ash’s shoulder.

“Yes, that’s right; I’m Joy. Montgomery.” She brushed a stray lock of hair behind her ear. “And you’re Ash. Ash Hunter. Oh!
How’s your shoulder?” Her face heated as she remembered their last meeting.

Ash frowned slightly. “Yeah, it took awhile, but I recovered from the incident. Had to have minor surgery, but it’s all good
now. Just a few twinges every now and then.” He rubbed his right shoulder as if massaging a sore muscle.

She jerked back. “What? Oh my God! I’m so sorry; you should have told me! My insurance could have covered it. Though I don’t
have any insurance, well, just a basic plan that probably wouldn’t have helped. Either way, I am
so
sorry.”