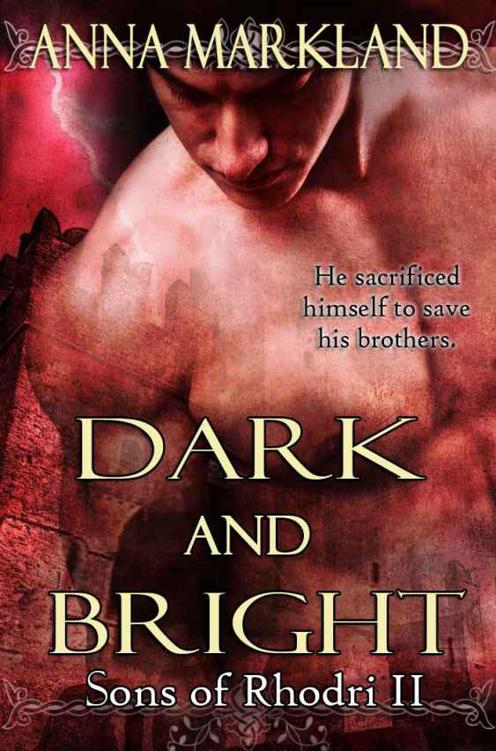 What Readers Are Saying about Anna’s books...

...a treasure chest of stunning medieval tales. Markland combines impeccable research with a rich and lyrical writing style that makes her stories a pleasure to read over and over again.

Gerri Russell, author of
To Tempt a Knight

Anna Markland is an incredible writer who writes great books.

This is the second book in a series entitled
Sons of Rhodri
. These stories grew out of
The Montbryce Legacy Series
. If you have read the Legacy books you will already be familiar with many of the characters in this book. If not, you will enjoy meeting them for the first time. This is the story of Rhodri and Rhonwen’s eldest son, Rhys.

At the end I’ve included a glossary of characters and a lexicon of foreign words and phrases used in my books.

I hope you come to love my characters as much as I do!

Other Books by Anna

~my daughter and my biggest fan

Rhys wasn’t a warrior. Not that he lacked courage. As a youth he’d accompanied his father, the legendary patriot Rhodri ap Owain, on forays against Norman holdings, both in England and against the expanding Norman presence in Wales itself. But his passion wasn’t for rebellion. He would leave that to his father and brothers. His longing for Welsh independence from foreign control was no less than theirs, but he was his mother’s son and had inherited Rhonwen’s love of peace. He believed that diplomacy and the making of strategic alliances was more likely to achieve what they all sought.

Gradually his reputation as a peacemaker grew in the Marches, the contentious border area between England and Wales. Certainly the Norman Earls of Ellesmere, father and now son, recognized his talents. The first Earl, Ram de Montbryce, had favoured negotiation over confrontation. He’d developed a healthy respect for Rhys. When Rhys’s sister, Carys, married Baudoin de Montbryce, now Second Earl of Ellesmere, Rhys foresaw the power it would bring his family. He encouraged the marriage, unlike his brothers, Rhun and Rhydderch.

Now, dire news had arrived that the Earl of Chester’s men had apprehended Rhun and Rhydderch. Condemned for rebellion, they were to be hanged in a few days. However, Rhys saw an opportunity in this disaster to build another alliance. His father was aging. As his eldest son, Rhys would become Prince of the
commote
of Powwydd on his father’s death. He would need to marry and provide heirs.

Having learned long ago the importance of contacts in high places, he’d recently been made aware that the Earl of Chester had become responsible for his late sister’s daughter, Annalise de Vymont. She was of marriageable age and the Earl would thus be expected to provide her dowry, since his brother-by-marriage had died penniless several sennights before.

Rhys had no desire to marry. He enjoyed his bachelor life. He was more than familiar with the story of his parents’ meeting and falling in love at first sight, and of Baudoin and Carys’s passion for each other, but doubted the same would happen for him. Better to spend his life working towards the freedom of Wales through his efforts as a diplomat than to be distracted by love.

However, duty demanded he marry. He resolved to make the Earl an offer for his niece. She would give him the sons he needed and he would provide a secure home for her in the
llys
at Powwydd.

He despatched messengers to Chester to request a meeting. The Earl no doubt expected it. They’d negotiated before. As the imposing castle came in sight, perched atop a hill around which the River Dee swept in a gradual curve, he imagined what it must have been like before the Normans came. Chester had been the last Saxon town to fall to the Conqueror and only great brutality had forced it to its knees. In the intervening years the stone motte and bailey had replaced whatever the Saxons had built.

Rhys had dressed in his finest clothes, as befitted his status. He’d chosen the bright red woollen tunic that came down to his shins. His mother always said red became him. It was his father’s favourite colour. The slits in the sides revealed a black undertunic. His knee length hose were also black, tied with embroidered ribbon, a gift from Carys. He wore them for luck. His tasseled boots were of the softest leather. He hoped his appearance would emphasize the seriousness of his overtures. He felt comfortable. But it wouldn’t be a good idea to underestimate Hugh d’Avranches. The Earl had become so obese he could barely walk and the Welsh called him
Hugh Vras
. But he was also known as
the Wolf
, because of his predatory nature.

Rhys didn’t expect to be greeted warmly as he entered the private sitting room. Though he was confident the Earl respected his abilities, a Norman would always consider a Welshman his inferior. He was given a polite welcome, as nobility obliged. Rhys thanked his host, then came straight to the point. “
Milord
Earl, I request the honour of becoming betrothed to your niece, Annalise de Vymont.”

The Earl, clad all in black from his boots to the jaunty hat perched precariously atop his bald head, arched his brows, the folds of his fat forehead doubling. “Hmph! I’d expected you’d want to discuss your outlaw brothers. I won’t free them.”

Rhys waited. The Earl hadn’t invited him to be seated. He tightened his grip on the hilt of his sword in an effort to control the urge to shift his stance. Better to be still. He inclined his head a smidgen as a sign of respect, but not defeat. He’d shot the first bolt—had it hit its target?

He wonders what I’m up to!

He didn’t want to give the impression he was staring, though such obesity did tend to draw the eye. He let his gaze wander over the opulent solar. The
llys
at Powwydd was well appointed, but here he was surrounded by extravagant luxury. Rich tapestries softened the lime-washed wooden panelling. Two ornate oaken chests sat against the walls. Glass filled the frames of the ornate window slits. Wolf skins warmed the floor. Perhaps that wasn’t a good omen. The Normans had made life comfortable for themselves.

The Earl coughed and shifted his considerable weight. The chair groaned. The page tried not to squint as a foul odour filled the air. “My niece? What do you know of her?”

Despite the reek of flatulence, Rhys resisted the urge to grimace. He’d gambled Chester wouldn’t pass up an opportunity to hear more about the offer. “As you’re aware, I’ve never met her,
milord
, but she’s of marriageable age and I’m confident she will make a good wife. As the future Prince of Powwydd I’m not without noble standing and can offer her a comfortable life.”

The caressing of the carvings became a drumming of the fingers. Suddenly the Earl gripped the chair and struggled to rise. The startled page rushed to aid him but Chester waved him away, eventually coming to his feet, albeit shakily. “You know she doesn’t speak Welsh, or English for that matter? She’s only recently arrived from Normandie after her father’s death.”

Chester was swaying, holding on to the arm of the chair. It was imperative for success that Rhys not betray his nervousness. “I’m aware of it. I’ve made it my business to learn Norman French. I believe in communication. I’ll teach her my language. I’m sure she can learn, can’t she?”

The Earl slumped back into the chair as abruptly as he’d risen. Rhys breathed a sigh of relief and hoped the beads of sweat on his upper lip weren’t obvious. The Norman’s leg twitched, but the man looked directly at Rhys. “Annalise is a beautiful, intelligent girl. She’s also very independent—had to be, growing up in the household of my wastrel brother-by-marriage,” he explained, bitterness in his voice. “Her mother died when she was born and her father never got over his wife’s death. He didn’t give Annalise much
tendresse
.”

Rhys squared his shoulders and cleared his throat. “I can’t offer her love, but I can offer fidelity and honesty. You know me as a man of integrity.”

The Earl’s leg twitched faster, the fingers drummed incessantly. “She’s not a wealthy woman. I will have to provide her dowry. What would you expect?”

Rhys didn’t hesitate. “The release and pardon of my brothers.”

The drumming stopped. The old Earl smiled. He stared at Rhys. Rhys waited. Finally, the Earl said, “I can’t release two brigands bent on attacking my lands. What guarantee do I have they’ll cease their raids?”

Again Rhys answered directly. He’d always found that the best approach. If one dallied in responding, your adversary doubted you. “You have my word. They will never again attack the lands of the Earl of Chester.”

He held his breath, expecting the Earl to demand more—the cessation perhaps of all hostility against any Norman territory—but all he said was, “And the only thing you would get out of the bargain is a wife?”

Rhys smiled inwardly, confident he’d won. “A wife who is of your family, my lord Earl. Surely such proud Norman connections can’t harm my family and will only further the cause of peace? My sister is already married to the Earl of Ellesmere.”

The Norman chuckled. “So, the sons of Rhodri ap Owain will have only the Earls of Hereford and Shrewsbury left to harass in the Marches? I see merit in the proposal. I’ll have my steward prepare a chamber for you to stay for a few days. On the morrow we’ll draw up the betrothal contract and you’ll meet Annalise. Welcome to my family, Lord of Powwydd.”

He held out his hand and Rhys strode forward to take it. The two men clasped hands to seal the bargain and Rhys inclined his head once more. “And I bid you welcome to mine, Lord Earl of Chester. What of the arrangements for my brothers?”

32aa by Michelle Cunnah
Crossword by Alan Bricklin
Fifth Ave 01 - Fifth Avenue by Smith, Christopher
Diablo Blanco Club: Rite of First Claim by Qwillia Rain
Half Past Dead by Meryl Sawyer
Cuts by Richard Laymon
Torch Song by Kate Wilhelm
The One That I Want by R. J. Jones
Shopping Showdown by Buffi BeCraft-Woodall
Village of the Ghost Bears by Stan Jones
Our partner