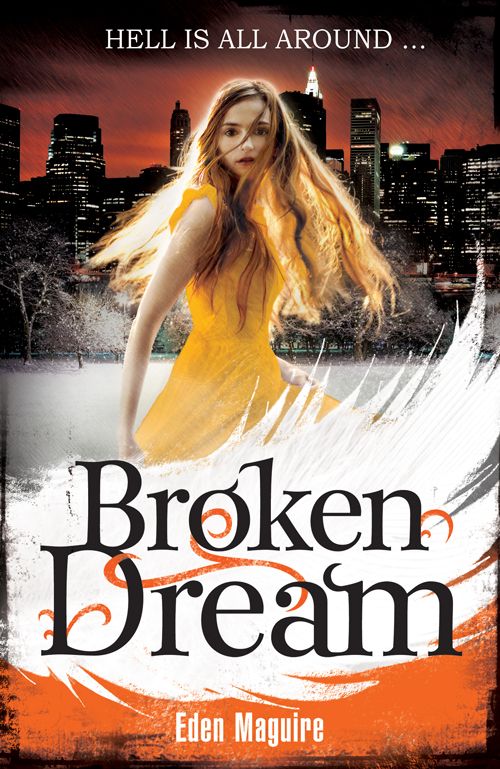 First published in Great Britain in 2012

The right of Eden Maguire to be identified as the Author of the Work has been asserted by her in accordance with the Copyright, Designs and Patents Act 1988

All rights reserved. Apart from any use permitted under UK copyright law, this publication may only be reproduced, stored or transmitted, in any form, or by any means with prior permission in writing from the publishers or in the case of reprographic production in accordance with the terms of licences issued by the Copyright Licensing Agency and may not be otherwise circulated in any form of binding or cover other than that in which it is published and without a similar condition being imposed on the subsequent purchaser.

A division of Hachette Children’s Books

For my editor, Naomi Pottesman
– delightful, enthusiastic and meticulous as ever.

The picture we’re staring at shows a whirling, swirling, magical night sky. The midnight blue is like nothing you’ve ever seen, the stars are crazy, the painter is Vincent van Gogh.

New York in December. Two days ago Orlando flew into Bitterroot from Dallas and from there we took a plane to JFK. We gave ourselves five beautiful days to explore the city – time for me to attend a three-day film workshop and for us both to shop until we dropped, watch movies and walk, walk, walk these bright, buzzing city streets.

Fourteen days before Christmas and outside the gallery it’s snowing. Earlier today the flakes froze on my eyelashes.

‘How did Vinnie do that?’ Orlando murmured. The colour, the texture, the light.

I agreed that the painting was awesome beyond words.

We weren’t alone in MoMA, obviously. Everyone who visits what must be the world’s biggest collection of modern art wants to stand in line to see
The Starry Night
, buy the postcard and go home to tell their friends. But the painting lifts you out of reality – the shuffling crowds, the air con and the uniformed security guards. You’re in a dream; it really feels like it’s just you and Vincent’s stars.

‘Let’s go.’ In the end Orlando had to take me by the arm and steer me away.

‘I know. But it’s time for lunch. We need to eat.’ He led me through the museum. I floated past magenta, cobalt-blue and chrome-yellow paint dribbled, splashed and thrown on to white surfaces, plus multimillion-dollar contemporary canvases that were pierced, slashed, scrunched up and scrawled on. I didn’t care about any of them, only Vincent.

‘Wow!’ Orlando kept hold of my hand until we reached the exit.

‘I know.’ Starry skies, midnight swimming in Turner Lake – that was how he and I first came together, in the mountains near our home. It was when he first told me he loved me and wanted to be with me always – under the stars in the cold, clear water. And now here we were in the heart of Manhattan, in a totally loved-up dream.

‘Me neither.’ Come back, words. Slot together and make sentences that prove we’re more than three years old.

So we crunched along snowy sidewalks, scaled small mountains of slush dumped in gutters and crossed streets when the lights said ‘Walk’ until we came to Central Park.

‘Look!’ I told Orlando at the gates. I pointed to the snowflakes settling on my eyebrows and eyelashes. ‘It’s happened again.’

He laughed and kissed me, brushed the flakes from my eyes. Then we bought burgers and set off to watch the skaters on Wollman, the happy carousel riders further up the Mall, the relaxed lunchtime drinkers at the Tavern on the Green.

We reached the frozen lake in the centre of the park.

Crack! Someone fired a gun in broad daylight. Orlando and I flinched, fighting the instinct to duck and run because that would have looked stupid when no one in the crowd ahead of us had reacted.

There was another crack, and another. I noticed a helicopter parked on one of the empty volleyball courts and the orange and white crowd-control tape stretched across the path.

Who was shooting who here? Where were the cops? Why were people clapping?

As it turned out, this was another kind of shooting altogether.

Orlando wove through the crowd and I followed.

‘Hey, back off!’ someone protested.

‘Yeah, we waited all morning to see this,’ a chunky woman to my right agreed, her voice muffled by the red scarf wound round the lower half of her face. And she stepped across our path. ‘You two don’t get to elbow your way right to the front.’

‘We were just trying … we only wanted …’ I tried to explain.

‘Stay right where you are. Can’t you see they’re filming?’

‘Stand behind the tape.’

And so on. This is how Orlando and I found we weren’t flavour of the month, that the gunshots weren’t real and that somebody famous was attracting all the applause.

‘Jack Kane,’ a nearby kid took pity on us and explained. ‘They’re shooting a scene for
Siege 2
. Didn’t you know?’

Orlando stood on tiptoe. At six three and on the balls of his feet he can see above most people’s heads. ‘Jesus – she’s right,’ he muttered.

‘What can you see? Tell me.’ The name Jack Kane equals blockbuster, equals squillions of dollars, bad boy headlines in every gossip magazine and a private army of security men wherever he goes.

‘The bridge and the boathouse across the lake, cameras, sound equipment …’ Orlando told me.

‘No – yeah, now I see him! They’re setting up another sequence; he’s sprinting down the steps on to the ice, he’s fallen into the water – oh no, that must be a stunt double. More gunfire, can you hear it?’

The shots rattled out as Orlando kept up the running commentary.

‘I can’t see a frickin’ thing,’ the pitying girl sighed. She was a couple of inches shorter than me and I’m five ten. ‘But I was in a great position when the helicopter landed. I got Jack Kane’s autograph and snapped a picture of us together. How cool is that.’

Orlando came down off his tiptoes. ‘Pretty cool, actually,’ he agreed.

‘I’m Tania,’ I told my new friend. ‘This is Orlando.’ The focus of the crowd changed from the boathouse to the stationary chopper. Heads turned. There was a fresh wave of oohs and aahs.

‘I’m Macy Osmond – Jack’s number one fan,’ she mumbled. ‘Looks like Jack’s finished filming for the day. Natalia’s waiting in the helicopter with the kids. They’ll fly out to the hotel, even though it’s only two blocks away on Park Avenue. The hotel has a landing pad on the roof. Natalia won’t travel any other way – not with the kids in tow.’

‘Security?’ I asked, impressed by Macy’s knowledge. She was pretty in a streetwise, heavy-kohl, tattoos and face-piercings kind of way. And she had zingy bright-red hair that shouted, ‘Look at me!’

She nodded. ‘See you later,’ she muttered as the crowd swung and shuffled en masse towards the volleyball courts to say goodbye to Jack. ‘Tomorrow maybe.’

Macy nodded. ‘This movie is going to be massive,’ she predicted. ‘I want to tell my kids I was here.’

Hey, Jude.
This was not Orlando breaking into the classic John Lennon riff, though we could see Strawberry Fields from where we stood and were able to pick out the Dakota building where he was shot dead. No, this was Orlando texting home.
Hey, Jude. Jack Kane is in Central Park, shooting scenes for Siege 2. It’s huge.
But when he pressed Send, his BlackBerry told him that his battery was flat.

We stood at the edge of the frozen lake as the big star’s chopper blades whirred. The crowd was splitting up. As Macy pushed past a gaggle of girls, she didn’t notice the strap of her handbag slip from her shoulder. A young guy bumped into her. The bag fell to the ground.

‘Wait – you dropped this!’ Orlando called and he stepped forward to pick it up.

As he stooped, the giggling girls came between us and I lost sight of him. No problem. He would hand Macy her bag and reappear in ten seconds max.

I glanced up. The girls had drifted away and there was no sign of Orlando, so I set off in the direction I’d last seen him. More Jack Kane fans crisscrossed the walkway. The chopper blades chugged and whirred, the engine roared, the star and his famous family rose into the sky.

‘Orlando?’ My voice was drowned out by the helicopter. I felt the force of the wind created by the rotating blades, leaned into it, pulled the hood of my quilted jacket low over my forehead.

The chopper rose like a giant dragonfly on skis, tilted clumsily then headed east towards Park Avenue. The actor’s fans watched it leave, sucking every second of enjoyment out of the afternoon’s gawk-fest.

‘Orlando!’ I didn’t care if guys around me stared – I raised my voice and yelled his name as loud as I could. I crossed the empty volleyball courts, spotting a dozen tall young guys wrapped up in scarves, hats, leather jackets, gloves. But none of them was my tall young guy.

How can this happen? One second Orlando was there in the dying light of the late afternoon, stooping to pick up Macy’s bag. The next second he was gone, all in the blink of an eye.

I took out my phone and tried to call him. Nothing. No reply. Then I remembered his dead battery.

OK. I told myself to stay calm. This was a minor crisis, but not one I couldn’t handle. Somewhere, not far away, Orlando would be looking for me. I should stay on the spot, wait for the crowd to disperse.

The snow, which had eased since we came out of the gallery, began to fall heavily again. My heart started to race.

Orlando, come back!
This time I didn’t open my mouth, I just willed him to find me at the edge of the empty courts, standing by the security tape, which flapped in the wind. My stomach twisted, panic rose. Imagination (which is my strong point) kicked in and I went into a whole elaborate scenario – the shady-looking guy in a hooded jacket, the one who had made body contact with Macy, had done it deliberately. His plan was to snatch her bag but a stupid bystander – Orlando – had got in his way. The guy had a knife. He used it on Orlando. I pictured blood in the snow.

I was alone by the frozen lake. Falling snow quickly covered the footprints made by the departing crowd.

Scenario two, minus my OTT imagination – Orlando had returned the bag to Macy without a hitch. She was super-grateful because it contained her camera with the precious photo of her and Jack Kane. He’d said no problem, given her one of his wide Irish smiles then made his way back to the spot where he thought he’d left me. Only he got confused and went to the wrong place. Then he started looking for me and the more he searched, the further away he drifted. It happens.

A Series of Unfortunate Events: The Slippery Slope by Lemony Snicket
The Black Widow by C.J. Johnson
Boys Will Be Boys - Their First Time by Mickey Erlach
The Pinnacle Of Empire (Book 6) by C. Craig Coleman
The World's Most Evil Gangs by Nigel Blundell
STRINGS of COLOR by Marian L. Thomas
High Sobriety by Jill Stark
The Celestial Instructi0n by Grady Ward
Mister B. Gone by Clive Barker
The Anonymous Bride by Vickie Mcdonough
Our partner