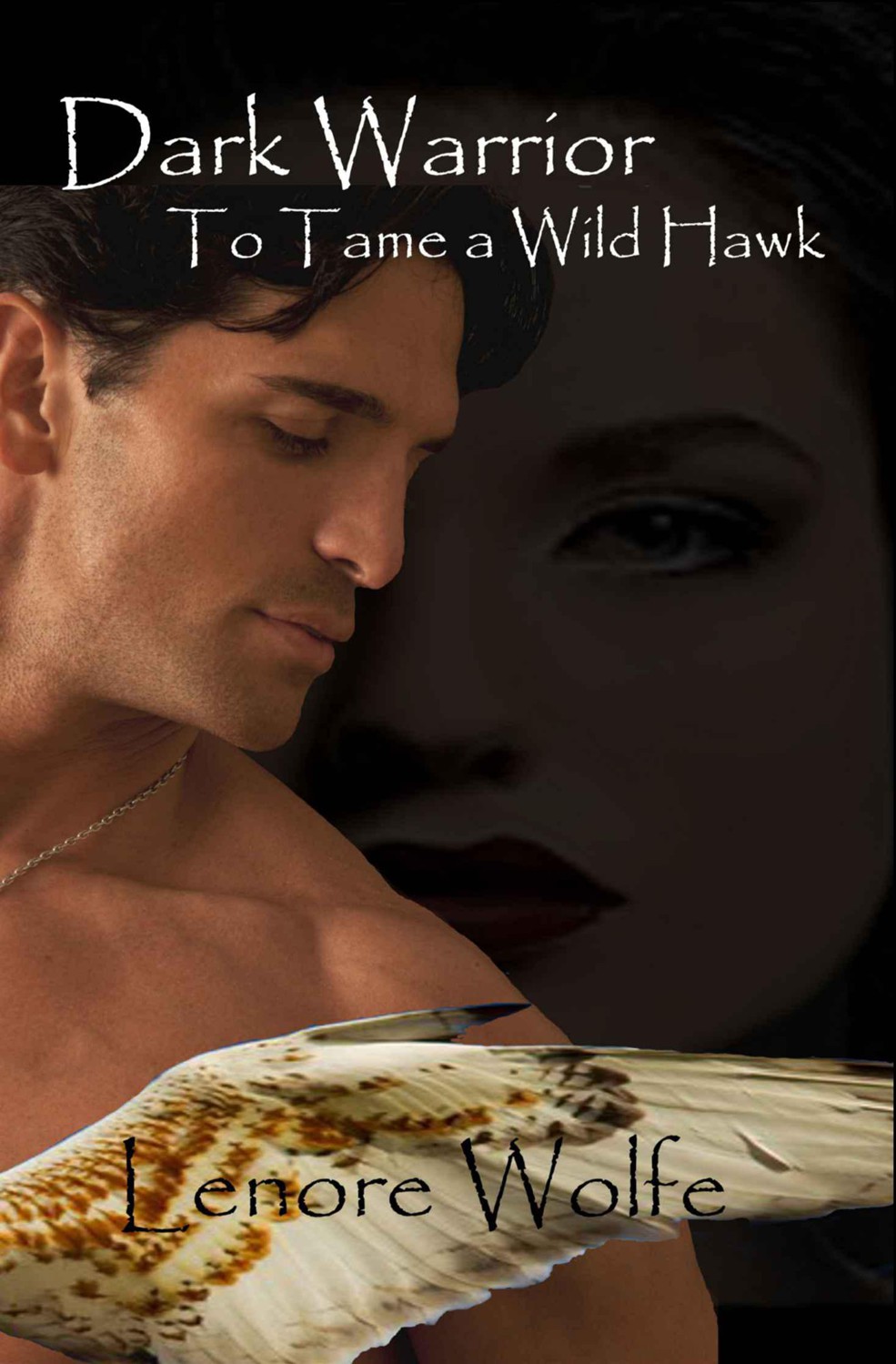 To Tame a Wild Hawk

From the Dark Cloth Series

This is a work of fiction. Names, characters, places and incidents either are the product of the authors imagination or are used fictitiously, and any resemblance to actual persons, living or dead, business establishments, events or locals are entirely coincidental.

“It was emotional, beautiful, and even suspenseful. A fabulous read!”

By Christie Snow on Amazon, Barnes and Noble, Smashwords and Goodreads

“This was a fast, action packed read with well-developed characters. While the plot was one of twists and turns, it was the characters and beautiful writing that kept me glued to the page. I know this is one book I'll read again!”

By JDS, author of the series, Ancient Legends, (London, UK) on Amazon

As J_Scott on Barnes and Nobel

And Jayde Scott on Smashwords and Goodreads

“This beautifully written story draws you in from the prologue and the details of the story makes you feel like you’re right there with them.”

A Special thank you to my editor Katy Sozaeva.

Katy, you make all of this possible.

She dreamed of him…

This is a work of fiction. Names, characters, places and incidents either are the product of the author’s imagination or are used fictitiously, and any resemblance to actual persons, living or dead, business establishments, events or locals are entirely coincidental.

W
e are born of ashes—and as the young boy stared at the ashes covering the palms of his hands, at six years old, he knew—to ashes we would return. They had appeared to ride from hell through the haze of the fiery sun as it lit the prairie grass around them. Flames from the setting sun licked at their feet, the thunder of horses’ hooves hitting the ground as though the Gods of thunder played the drums—burning the sky down around them.

Screams of women and children filled the hot prairie air, as they ran without direction. They could not evade the men on horseback, who rode them down and shot them with no more emotion than they would show a wild animal. The men from the wagon train swore viciously and shot back at their invaders, diving behind anything that offered them cover on the barren grasslands. Horses’ high-pitched whinnies rose above the melee, and they lunged in fright and pain whenever a stray bullet struck them and brought them down or caused them to stampede out of control.

A bullet struck the ground at his feet. He stood, staring at it. It befuddled him; refused to give word or heed to the reality happening around him. As he stared at it, stillness settled within him like fractured pieces of time. A voice that seemed to come from nowhere, yet everywhere, yelled, “Run!” and in blind panic, he obeyed.

He ran past a wagon; the thud of a bullet, slamming into the side and splintering the wood, causing him to flinch. A long sliver struck him in the cheek as he dove into the bushes at its rear. Then, the sight of a man on a pony caught his attention—and, once more, all he could do was stare.

He stared, paralyzed, as the man shot a boy in the back, heard the heart-stopping scream of the boy’s mother and saw her go down beside her son, an ugly, red stain covering her chest. He swallowed hard at the bile that burned its way up his throat. Tears pooled in his golden eyes. Much later, he would recall how the mules brayed in panic and broke loose from their harnesses, trampling any who got in their way. But, for now, he did not see them. Later, he would remember the wagons tipping over in the frenzied melee, crushing the few who hid beside them. He would dream of this, have nightmares of this. But, for now, he saw only
the man
.

He squinted through the haze of dust at the man who took careful aim, killing their friends, one by one. Giving a small cry, he leaped up, his only thought that somehow
he must stop his papa
. But a bullet slammed into the dirt beside him, and he hunkered back down. Dust spiraled all around him, choking him. He covered his nose and mouth with a mud-streaked hand. He mustn’t sneeze. If he did, they would kill him, too. Maybe if he got really little, they wouldn’t see him. He hunkered down and got as small as he could.

A screaming child ran past his hiding place, and Jordy couldn’t help himself; he stood to help her. In the next instant, her small body jerked backward as if pulled by an invisible thread. His knees buckled. He slid to the ground in a heap. Open-mouthed, he stared at the man who held the gun. “Papa,” he mouthed. Paralyzed, he watched his father rack another bullet into the chamber; watched as he lifted the rifle and took aim. Jordy’s gaze followed the direction his father pointed the gun.

The bullet slammed into Yellow Wolf’s back. As if in slow motion, their scout spun around and fell to the ground. Tears streamed down Jordy’s face, leaving dusty tracks in their wake, and this time he did scream, “Yellow Wolf. No, no, no!” He realized what he had done, caught his lip between mud-streaked teeth, covered his mouth with his hands and whimpered, but no one paid him any mind.

The grasslands carried the last screams of the dying across the plains. Jordy placed his hands over his ears and rocked back and forth in his hiding place in the tall prairie grass. Then, even the screaming stopped, and he sagged in the silence. The men looted the dead and shot those who moaned. Jordy’s breath left his lungs and lodged in his throat.
Papa?
Tears rolled down his chubby cheeks, leaving a trail of wet dust in their wake. He swallowed at the huge lump in his throat. How could his papa do this?

And as he peeked through the prairie grass, there stood a man in the middle of the melee. He stood, in his long, fancy coat, out of place even to a six-year-old boy. As Jordy squinted through the smoke and dust, he realized the man was looking for someone.

A terrible feeling crawled through his tummy
.

Jordy hunkered down as far as he could get in the grass as the man’s gaze turned directly to where he hid.

The hair stood up on the back of the boy’s neck.

The man had no face.

Worse, instead of a face, he seemed to wear some kind of mask, which looked like a face—
but was not a face at all.

Jordy wanted to scream. He felt as if he were having a bad dream and couldn’t wake up. He’d swear he was awake, that everything was real—yet not real.

Not real at all
.

He let out a breath when the man turned to one of the other men, who were by now, showing signs of wanting to shoot each other, if their raised voices and arguing were any indication.

The men hollered at his father, and his papa shouted back at them. Jordy bit his lip until he tasted blood as they mounted up, and he didn’t breathe until they rode out. More tears rolled down his face. His papa hadn’t looked around for him
—not once.

He curled up into a ball and cried. His throat burned, and something squeezed his heart until he thought it would burst. He wished his ma was here. But she was gone. She had died in childbirth, changing his father. His papa had become angry and drank a lot after she died. And he wouldn’t even look at Jordy’s new baby sister. Then, one day, his papa had packed Jordy up and headed west, leaving his baby sister behind with his Aunt Sarah. He didn’t know how to get back to her. He was all alone.

Yellow Wolf was dead now, too. The Cheyenne scout always talked to him when he hurt. But he never would again. With deep, wracking sobs, he cried for some time, rocking back and forth. He must have fallen asleep, because, the next thing he knew, he heard the sound of a lone horse coming his way, and he held very still.

For those who would listen, who could tilt their head and hear it, the wind blew a death song across the prairie. It lifted and danced among the grass tops, a sad and mournful song.

To the Cheyenne warrior, looking out over the massacre of the wagon train, the voices of many joined in that song. He rode his pony with the ease of his people. The richness of his ancestry was etched in the lines of his regal bearing. His pony picked its way amongst the dead as if to show his own reverence for what had taken place here this day. The warrior tilted his head as if listening to their story. For, indeed, there was a tale to tell.

He heard their sorrowful song because he had learned to listen. Their broken bodies cried out to his spirit. Their sightless eyes stared up at the heavens. Women who’d fallen by their children. Men who’d fought to save their families. Horses dead under their saddles, and mules and oxen fallen right where they’d stood, still in their harnesses. Wagons tipped over.

The Young Vampire Mate: The Airendell Chronicler Diaries - Book 1.5 by Audra Hart
Against All Odds - Angel's Story: Against All Odds (Destiny Series Book 4) by Perry, J L
Exodus (Imp Series Book 8) by Debra Dunbar
The Raven Warrior by Alice Borchardt
Complete Works of Joseph Conrad (Illustrated) by CONRAD, JOSEPH
Being Zolt by D. L. Raver
REMEMBER ME: GODS OF CHAOS MC by Palomino, Honey
Defying Desire by A. C. Arthur
The Evil Beneath by A.J. Waines
Escape by Moonlight by Mary Nichols
Our partner