Read Darkin: The Prophecy of the Key (The Darkin Saga Book 2) Online

Darkin: The Prophecy of the Key (The Darkin Saga Book 2) 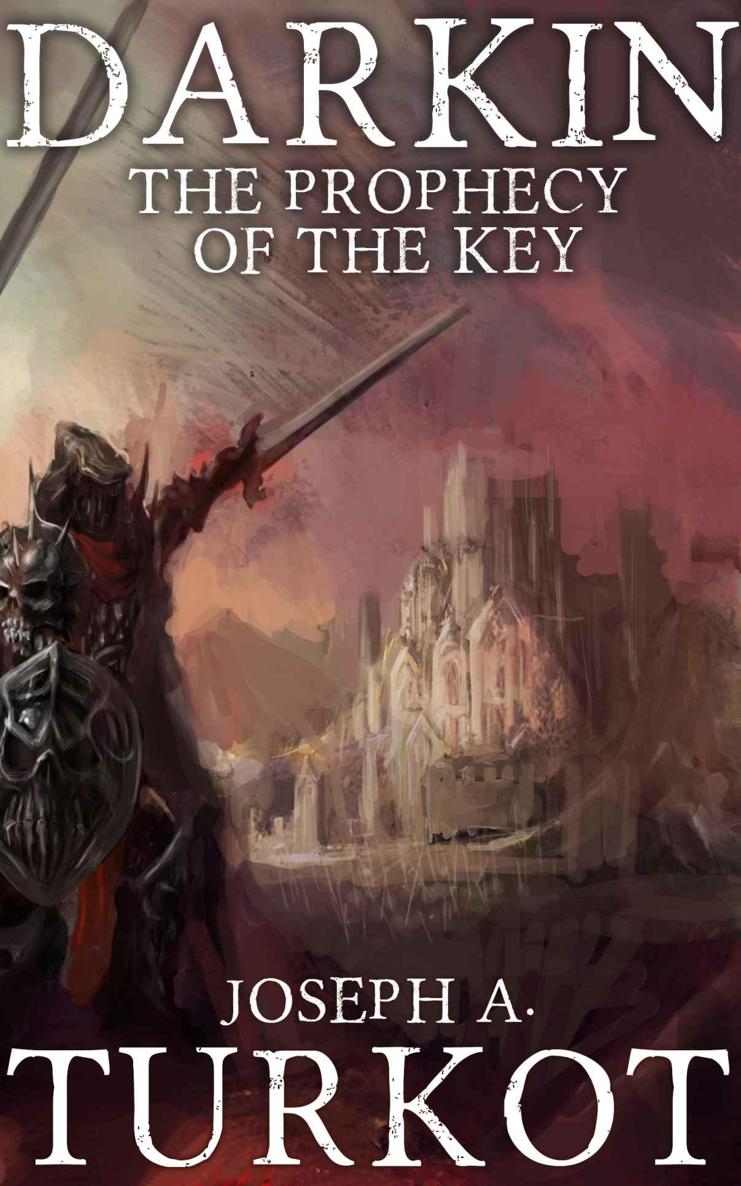 BOOK 2 OF THE DARKIN SAGA

DARKIN 2: The Prophecy of the Key

More Books By Joseph A. Turkot

An innocuous drone broke the abyssal quiet of space. Amid an endless drapery of stars hovered a ship; the vessel murmured, slowly orbiting the bright turquoise orb of Darkin. Within the matte grey hull of the craft a council of beings assembled.

Eleven sat at a jet oblong table, staring patiently at a fit young woman, clothed tightly in black, who had momentarily stepped away from her seat. Looking through a great spherical window on the starboard hull, she cast her eyes on a swirling contortion of clouds: the Darkin atmosphere. After a long sigh she turned to address those sitting motionless, waiting.

“The last store is here,” her commanding voice echoed through the sparse chamber hall. “We will
not waste any more time. Land near the location of the ore, and retrieve it—no harm is to be done to this planet or its inhabitants. Only retrieve the ore. That is our imperative.”

“But commander, our preliminary scan revealed that we no longer know the location of the ore—it has been unearthed and moved,” came an anxious reply from a wrinkled man. The woman casually turned to him.

“I am aware of the report, Brosse. The metal will still be in the vicinity of the original location—or are you suggesting that the intelligent people of this planet found a way to utilize the ore themselves? Melt it down? Build a weapon from it, perhaps?” she replied, chuckling to herself.

“Of course not commander, but what if they deemed it valuable for trade? It may have been shipped to the other end of the planet,” said Brosse.

“Then you will determine from the planet’s inhabitants the location of the ore, and obtain it in as quick a manner as possible—must I remind you what is at stake? If we do not get the ore quickly, we cannot reverse the engine of the cosmos—we cannot stop the expansion of the universe, and our home will be lost.”

I: A CONNECTED ONE

The soft green glow saturated the small cottage room, and for a moment Adacon forgot it was still snowing heavily outside. Flaer had a look of urgency that had been gone from the faces of all his other friends—the rest of them had been overjoyed that he was awake again, that Aulterion had been defeated, that Enoa was safe. Flaer did not seem happy at all—he wore a grave visage, and Adacon despaired at the odd magic that had sequestered them, undulating in a low throbbing rhythm.

“Hear what? What is it Flaer?” Adacon sat up alarmed, nearly panicking. There could be no evil in Flaer, he would have sensed it, but this made no sense.

“Listen. Krem and Slowin already know. In fact, it was Krem who first suspected it, which was why he aided you that night on the farm.”

“Flaer, I still don’t know what you’re talking about…”

“Have you ever felt as if you were being driven by a force not your own, that some external energy controlled you?”

Adacon thought about his escape from the farm; a strange voice had aided him then, and his attacks had been fatal and swift.

“I have. How would you know I’ve felt that way? I never said anything—not to Krem or Erguile. Ever since the night I escaped it has come and gone,” he stammered.

“You have a special power.”

“Krem said something about it. I don’t know how I could have helped in the slaying of Aulterion, it makes no sense. I was knocked out; I don’t have any power.”

“But you do, you’ve just admitted that you’ve felt it all along.”

“I’m sorry Flaer. I am so glad you can talk now, it must have been awful not being able to, but can you just tell me what this is really about?” Adacon said. He waited patiently for Flaer to respond. Several moments of silence passed, and the emerald-white hue throbbing over the walls and windows rippled dramatically as if in answer to his question.

“You learned that magic is real from Krem—you know that magic simply means drawing energy from the planet, drawing from Gaigas, the great source of Darkin’s life.”

“I learned that those who harness and use that power for good are Vapours, like Krem is—and those who use it for evil are dark mages like Aulterion was.”

“What are you saying? How is this about me?”

“As much as I doubted Krem, and I did—I know now he was right.”

“What is a connected one?”

“You are a Welsprin—a connected one—a person who has a direct link with Gaigas.”

“It’s true—at first I doubted Krem, there hasn’t been a Welsprin aside from Tempern the Elder for a hundred centuries…”

“You’re telling me that I, along with this Tempern, are the only connected ones in all of Darkin?” replied Adacon, head full of confusion and angst.

“I told you, I didn’t think it could be true either—it took you destroying Aulterion to make me believe what Krem predicted. Even Tempern himself, when Krem portended it to be so, doubted the truth. But our doubt is now gone, and that you are a Welsprin has been proven, irrevocably.”

“But I still don’t know how I helped you defeat Aulterion, no one has explained. The last thing I remember is being knocked unconscious by the enormous energy that was coming from your sword,” Adacon recalled as if from a dream. He felt his life becoming stranger by the moment, surreal, similar to how he felt after first killing the guards in his escape from his plantation.

“I was knocked down, nearly defeated. Aulterion had Merol, the traitor mage of the dwarves, channeling all his energy to him. I could no longer deflect his blows, even the Brigun Autilus was no match for that power,” Flaer told. “Krem intervened after you landed with Falen; he directed all his energy at Aulterion, but it was deflected back at him. He acted quickly enough, drawing a shield around himself, but the blast ricocheted, struck me down. It was then that your power appeared.”

“Why can’t I remember any of this?”

“I can’t be sure. Perhaps the energy was too strong. Maybe as your connection with Gaigas overtook you, you lost any semblance of a unique being, lost all awareness. It didn’t matter that you were unconscious though, for the ground quaked open at Aulterion’s feet, and you began to glow, the color of frosted sapphire. Lightning snapped from your limbs as I lay in agony, only able to watch. You had become blinding, impossible to behold; rays struck from your hands, the earth tore apart, and a great bolt leapt from the ground, pure light—the most intense concentration of energy I have ever felt. It channeled from the ground into the sky, cutting right through Aulterion. Had that blast been directed downward instead of toward the sky, I fear for what might have become of our world. Aulterion dissolved in the light—evaporated—and it was the most beautiful thing I have ever experienced.”

“I can’t believe that, that it was me who did—”

“It was, make no mistake, and don’t question it.”

“And then the battle was over?”

“After Aulterion was obliterated, the blinding white, the stream of lightning, it all stopped as suddenly as it started. You fell to the ground, lifeless—Krem thought you were dead. I regained my strength, and together we fought to destroy the scattered, leaderless droves of the Feral Army, while Falen flew you away to safety on the Great Plain.”

“I really don’t know what to make of this, I’m honored that I helped somehow, but I still can’t believe it was me that did that.”

“Perhaps when you train under Tempern, you will begin to feel otherwise,” Flaer grunted.

“That’s why I sealed the room with Vapoury—none other than Krem, Slowin, and I know of the importance of your true power, and we must keep it that way, until you have been mentored by Tempern.”

“Why can’t the others know?”

“They know enough—that you somehow killed Aulterion alongside me. They all saw the blast from afar, felt it, were shaken by it. But now that we know you are a Welsprin, we must be cautious—Zesm will seek to corrupt you, should he find out what you are. No one else must know where you are going, or why. Until you can understand your ability, you will be defended against the malign forces that would seek to have your power for their own ends. Though your strength is tremendous, it is untempered—and you are still vulnerable to dark magic.” Adacon met Flaer’s order with silence and began to mill through thoughts of anger. He had just begun to think of his peaceful life with Calan, and now it was to be ruined. Was there any choice in the matter? Would he have to leave her, even as he had just awoken? Adacon despaired at the new burden and a destiny that seemed beyond his control. The strange power he possessed didn’t make him feel any better about it; it felt simply unfair.

“I know how you feel. I have been there myself. Though I am no Welsprin, know that I am cursed in worse ways—I am immortal, and it is the darkest burden you could imagine.”

“Immortal—how can that be possible?”

“Magic whose origins we do not have the time to delve into now. I do not age. A powerful enough foe could destroy me, but I shall never grow old and find peaceful rest like all others.”

“Yes. I am older than Krem, and even Slowin, who has been on Darkin for thousands of years. It is a curse, and too long a tale to tell now. I grow weary already from burdening you as I have.”

“Can’t you lift the curse?”

“I am bound to the curse—if the curse were lifted…” Flaer stopped talking as a rapping sound echoed through the room. The waves of green energy rippled fiercely near the door, and Flaer waved his hands. The foam of energy that painted the room dissipated as quickly as it had appeared. Adacon rubbed his head in exhaustion, and Flaer paced toward the door to see who was knocking.

“Sorry to interrupt, but we’ve just received news that the Grand Council of Erol Drunne has called a meeting of grave urgency. It’s about a star,” said Slowin in a hushed tone through the slightly cracked door. Adacon perked up from his bed, trying to hear the whispers.

“I don’t know any more than that—no one does. Krem doesn’t even know what this is about. They want you there, of course.”