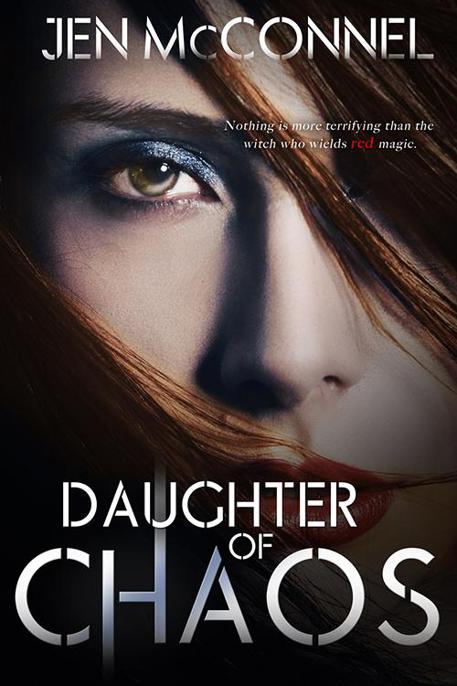 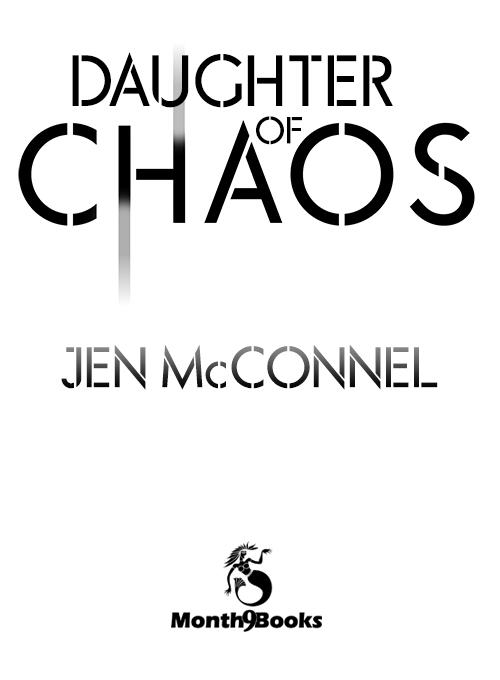 DAUGHTER OF CHAOS by Jen McConnel

All rights reserved. Published in the United States of America by Month9Books. Month9Books and its related logo are registered trademarks of Month9Books, LLC.

No part of this eBook may be used or reproduced in any manner whatsoever without written permission of the publisher, except in the case of brief quotations embodied in critical articles and reviews. 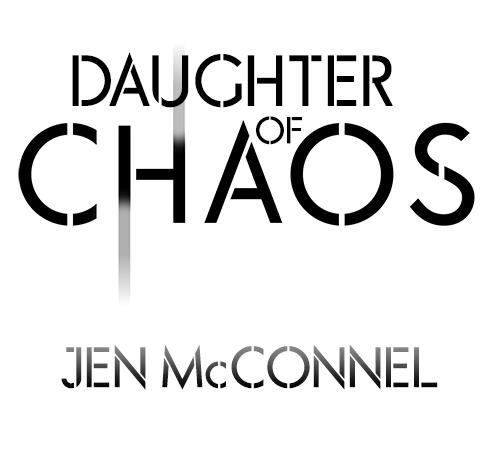 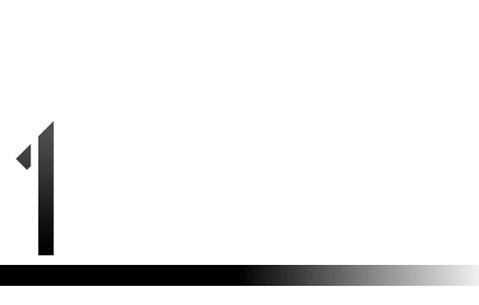 I had been looking forward to tonight all week. It wasn’t often that I got the house to myself; my parents aren’t really the “date-night” type. That’s why I was thrilled when they announced they were going to some cheesy classic rock concert in Raleigh tonight. Mom had tried to persuade me to come along.

“It’ll be fun, sweetie. You love concerts!” she’d pleaded. I do love concerts, but she and I have very different ideas about what constitutes music. So I stayed home, planning to relax and shake off the week.

School had sucked more than usual the past five days. Things were getting weirder with Justin, if that was possible. I thought we’d hit an all-time low with our breakup, but I’d been wrong. As if that wasn’t enough, it seemed like the teachers were trying to torture us; in one week, I’d had two essays due and three major tests. Somehow, I had managed to pull off a B- on the alchemy test. Science has always been my worst subject, even if alchemy is a magical science.

Since I got that grade without cheating, I thought I deserved a bit of pampering. I popped myself a big bowl of popcorn, grabbed an orange soda, and parked myself on the couch. I had been recording my favorite show for weeks, hoarding the episodes like Halloween candy until the perfect opportunity presented itself. I don’t know why, but I love watching the cake show on the home and garden channel. It wouldn’t surprise me if they had a Witch or two in that kitchen; they do way more with frosting than Nons should be able to!

Thinking I had hours of sugary entertainment in store, I settled in with the remote. I only made it about ten minutes into the first episode before the power surged and the DVR reset itself. Annoyed, I scrolled through the menu to get back to my show just as a crash of thunder rocked the house. I jumped, spilling popcorn all over the couch. The lights flickered and the power went out.

I leaned forward, groping around the coffee table for matches. The house was full of candles, and my mother left the big boxes of kitchen matches scattered around for easy access. My fingers closed around the thick rectangle and my skin prickled.

Someone was in the living room with me. There was a hunched figure standing in front of the window. Sucking in my breath, I opened the box and struck a match along the side. The smell of sulfur filled the room, and my eyes widened as I stared at the figure before me.

She was a funny-looking old woman, and if I didn’t know exactly who she was, I might have laughed at her. As it was, the sight of Hecate standing in my living room made me incredibly uncomfortable. Although I knew that the gods played a role in magic, this was the first time I had ever met one of them face-to-face. I’d never expected in a million years that I would meet a god as powerful and frightening as Hecate.

The Queen of Witches was not given to traipsing through time and space on a whim; in fact, we’d learned in school that historically, Hecate only appeared for one of two reasons: to punish someone who broke the laws of Witchcraft, or to reward an unusually talented Witch. The last time the latter had happened was about five hundred years ago, and I don’t think I have much in common with Will Shakespeare, so I figured her presence must be due to my mounting transgressions.

For the first time, I wished I were with my parents. A few hours ago, I couldn’t imagine anything worse than being stuck in a stadium with a bunch of old hippies trying to recreate Woodstock. Now I could.

Bowing my head before the goddess, I tensed, wondering if I could talk my way out of the punishment that was inevitably coming. Surely a few little hexes weren’t enough to have me chastised for breaking the Rede?

The Rede is the cardinal rule of magic, and it had been drummed into my head by my parents and teachers for years. According to the Rede, Witches are free to act as we choose as long as our actions don’t bring harm. I tried hard to follow it, but sometimes I couldn’t resist using my magic for a little well-deserved payback. From what I knew of Hecate, she herself was no stranger to small acts of revenge. Maybe, I thought hopefully, maybe she would go easy on me.

“Girl.” Her voice was raspy, like a rusty door hinge, and I jerked despite myself. She chuckled without humor. “Girl, look at me.”

Slowly, I raised my eyes, sweeping my gaze up her inky black robes that shimmered like water, past the blood-red stone dangling from her throat, and up to her golden eyes. They weren’t human, but from what I remembered of the myths we studied at school, Hecate had never valued humanity. Her eyes were the eyes of a night predator—an owl or fox—and they held me spellbound.

“Darlena. Darlena, I have been aware of you for some time now.” Her words came slowly, creaking into existence and lingering. I was frozen with fear. “Child, you stand at the brink. A choice must be made.”

Confused, I started to shake my head, but her ragged claw shot out and held my chin steady.

“You, child, will be powerful. But you stand at a crossing. Choose.”

Silently, I shut my eyes, willing the apparition before me to vanish. She just laughed.

“Darlena, little one, choose your path. Will you walk the White, the Black, or the Green?”

At these words, her visit suddenly made sense. We had spent a good deal of time studying the three paths in school, even taking monthly aptitude tests to determine which path we would follow in our own lives. Most of my classmates already knew which of the three branches they were called to, but I kept getting confused. I never seemed to test high in any of the three areas, and for a Blood Witch to be sixteen and still without a path was shameful. No one had said anything, of course, not outright, but I felt my parents’ growing frustration that I hadn’t declared yet. At the same time, no one had said what would happen if I didn’t choose a path, so I had delayed, waiting for something to take the decision out of my hands.

And now the Queen of Witches stood before me, demanding that I make a choice I wasn’t prepared to make.

I shook my head, and her claw tightened on my chin. Her fingernails, sharp and ragged, bit into my flesh with subtle pressure.

“You must choose, child. Choose now, and choose once, for once taken, the path becomes your fate.”

I looked into those strange golden eyes, searching for a way out. “Majesty, what would you have me choose?”

She chortled. “It is not what I want, girl. It is what you are called to. I would have you choose now, and choose wisely. You will not have a second choice.”

Even though the goddess was staring at me intently, I couldn’t keep my mind focused on her words. My thoughts went back to a few weeks ago, when Rochelle and I were hiding in the art room at school. She sketched with charcoal while I worked a spell. I had just bound a hex with red thread when Justin walked in. His brown eyes widened when he saw what I was doing, and he threw an accusing glance toward Rochelle, but he shut the door and sat down across from me without saying anything. Rochelle ignored him, but the sound of her charcoal against the page got louder. I finished up the spell and then looked up to meet his troubled gaze. I could feel the energy radiating off of him, and I resisted the urge to reach for his hand. Instead, I raised an eyebrow, hoping I looked bored.

He cleared his throat. “Who are you hexing?”

I shrugged and looked back at the hex. “Principal Snout didn’t even bother listening to my side of things this time.”

“Lena, is this really a good idea?”

I glared at him, so he switched tactics.

“I found my path today. I’ve decided to declare to White magic.”

I nodded, and Rochelle stiffened slightly. He didn’t seem to notice and I wondered if all White Witches were as oblivious to the undercurrents surrounding them. His declaration was hardly news to anyone but Justin; he’d always been so noble and good that I don’t think anyone at school doubted he was destined to follow the White path, the same way everyone seemed to know Rochelle was leaning toward the Black. He smiled unsteadily, still getting used to his new identity. I swallowed, trying to slow my heart rate. His tentative smile was still enough to get under my skin.