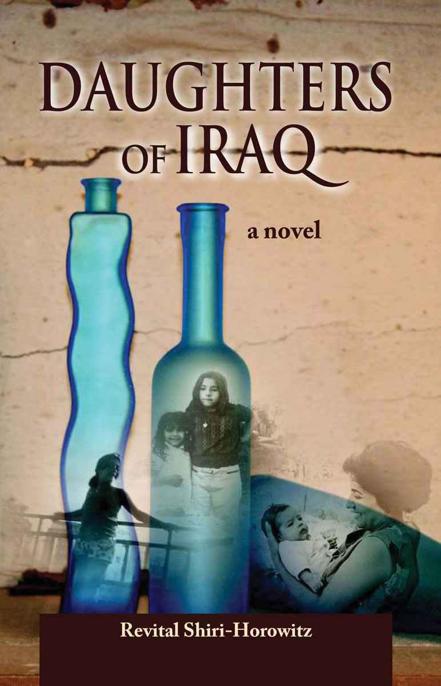 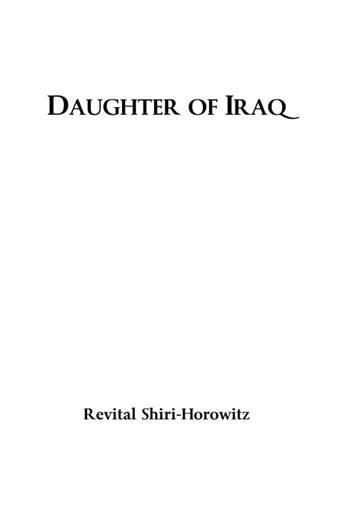 Dedicated with love to the women in my family, and to women all over the world whose voices are silenced.

“My father’s calling me,” I said to my best friend, Naima. “Don’t go anywhere. I’ll be right back.” I ran up the narrow stairway that led to my family's house. When I looked into
Aba
’s eyes, I knew I was in serious trouble. My heart froze.

“Violet Twaina!” My father stood fuming, rocking on his heels, hands buried deep inside his pockets. “Mrs. Chanukah called from school. She said you talked back to Mrs. Zbeida today.” The terrifying glare accompanying his words seemed a sure sign harsh punishment awaited me.

“What are you talking about? I didn't do anything,” I said, crossing my fingers behind my back, desperate to wheedle out of the situation.

“Don't tell me stories, Violet,” my father said. “I know you're lying, and I know you talked back! Mrs. Chanukah doesn't call parents out of the blue and waste their precious time. She said Mrs. Zbeida asked you to stop talking, and you told her you hadn't been talking, that maybe it was time for her to get her hearing checked once and for all, because this wasn't the first time she’d blamed you for something you hadn't done.”

“That's not true. That's not how it happened! She's always accusing me of things I didn’t do. I hate that teacher,” I said. “She picks on me for no reason. She’s very rude to me. She told me to shut up, but I wasn’t even talking. And,” I continued, unable to stop myself, “I said it very politely. All I said is that she must have misheard, because it wasn't me. If you want, you can ask Naima,” I said, dragging my poor friend into my scheme.

“Go tell Naima to come upstairs right away.” My father’s voice was angry; I could tell he didn’t believe me. I went down and called Naima, trying to think of how I could buy her cooperation.

“Naima,” I said. “My father wants to ask you something, and you really have to help me. If you do what I tell you, I'll give you Fahima as a present.” Fahima was my most beautiful doll. She had long flowing hair I loved to comb and several outfits my mother had sewn especially for her.

“Fahima?” Naima asked. “If I do what you say, you’ll really give me Fahima?”

“Yes, I swear, I'll give her to you.” I raised my hands to my heart and looked right into her eyes. I knew she wouldn’t be able to resist. “That vicious teacher Mrs. Zbeida, she’s always getting me into trouble. You have to tell my father I didn't say a thing in school today. Tell him everything I told him is true.”

“
Wai li
,” said Naima, grinning. “The way you spoke to her! The whole class was rolling on the floor.”

She had reason to be worried, but my style was to jump into icy water first, then think about it later. “I don’t know. Let’s not think about it. Come on, he’s waiting for us.”

We went upstairs.
Aba
sat in the living room, in a big red armchair covered in an embroidered fabric flecked with real gold. When we walked into the room, he turned a menacing gaze on us. Normally my father would have asked after Naima’s family, but he got straight to the point.

“I understand something happened in school today,” he said.

Naima stared at the floor. “Yes,” she said. “Yes, Mr. Twaina. A lot of things happened in school today. Which one do you mean?”

“I understand that Mrs. Zbeida got angry at Violet during class. Can you tell me what happened?”

Naima tried to fulfill her part of the deal. In a voice not much louder than a whisper, she said, “Mrs. Zbeida didn’t get angry at Violet at all.”

I hadn’t thought of this. My father had outsmarted me; instead of offering my story for her verification, he had allowed Naima to make up her own version.

“That’s not what Mrs. Chanukah told me!” he hissed.

“Mr. Twaina,” Naima said, “Violet is such a good student, so quiet and serious. Nobody could ever complain about her. She sits so nicely in class. She pays attention, she doesn’t talk, and she always does her homework. It doesn’t seem possible she did anything wrong. Mrs. Chanukah must have gotten her mixed up with this other girl who’s always bothering her and called you instead of the other parents.”

Even I could tell she had gone too far. And
Aba
—who knew me very well, who knew I could never be the angelic little girl Naima described—couldn’t decide whether to laugh or cry. Realizing Naima would be of no help, he called for his driver and sent her home. I knew exactly what would happen next.
This is it
, I thought.
I’m doomed
. A week under “house arrest.” No going out to see people, nobody coming to see me. As for the beating, I wasn’t afraid. Whenever my father hit me, I imagined my nephew Eddie, my sister Farida, and I jumping into the river, and all I was feeling was the touch of water on my skin.

My father didn’t yell. He glared at me and said, “I know you, and I know that you talked back to your teacher. Not only did you lie to me, but you made Naima lie to me as well. You are a bad girl. You have no respect for anyone, and you don’t care about anything. The only one you care about is yourself. Well, I’ll show you exactly what you are. Go to my closet and bring me my thickest belt. Go on. I’ll wait for you right here. If you try to trick me by bringing a different belt, I’ll beat you with both of them.”

I went to my parents’ room. Nothing could help me now. The other children of the family saw me crying, but they didn’t say a word; they were already used to these scenes. I was the only girl in my family consistently beaten, and everyone knew why. I was the rebellious child. I dodged responsibilities, and I pushed limits. I wasn’t afraid of anything, and I did whatever I wanted. I lied constantly, with no remorse. I ran away to the river with Eddie, I talked back to the teachers, I skipped classes, and I stole money from mother’s drawer for candy. In other words, I knew how to live, and I didn’t let any person, or any consequence, dampen my adventurous spirit.

My father beat me that day—he beat me whenever I did anything stupid—but his anger drove him beyond a normal thrashing, and my mother was forced to intercede. She pleaded with him to stop, and finally he did. My back hurt, my bottom hurt, and I couldn’t move. And of course he told me that until Eddie’s Bar Mitzvah, which was ten days away, I could only leave the house for school, and I had to come straight home. I couldn’t play outside, and I couldn’t see my friends.
Aba
’s driver would take me to school in the morning and bring me home in the afternoon. None of this broke my spirit, though, because I knew a little patience was all I needed; then I could go back to doing as I pleased. I never gave Fahima to Naima. I told her she hadn’t lived up to her end of the bargain and that she’d gotten me into even more trouble. Back then, that was how I behaved.

F
arida felt uneasy about doing her usual Sunday errands. She had both a daily routine and a weekly routine, and she tried to stick to them; she knew if she fell behind, the pressure would be too much for her. Sunday was supposed to be haircut day. After spending all day Friday cooking, by the next morning she usually looked haggard, and her fine hair was imbued with kitchen smells. On that particular Sunday morning, however, she was reluctant to leave the house for her weekly salon visit. The heat was oppressive, and newscasters talked of terrorist attacks. In order to reach her appointment, she would have to wait for the 15 Bus which came only once an hour take the bus to the center of town, and then walk to Shimon’s Salon, situated next door to Chaim the Moroccan’s butcher, right below the new Chinese restaurant. Because of all the talk about bombs, Farida didn’t want to take the bus, and so after much deliberation she decided to stay home and cook okra patties for her grandchildren, who were visiting the following day.

She rinsed the okra, removed the stalks, sliced an onion and sautéed it. While she worked, her thoughts drifted to Baghdad, the city of her birth. Farida remembered the large houses with the enormous courtyards, designed to accommodate prodigious families like hers. Each wing of her house was inhabited by a different family:
Aba
,
Ima
, Violet, and Farida herself, the youngest daughter, lived in one wing; her sister Farcha, along with her husband Sammy and their three children, lived in another; her brother Anwar lived in a third wing with his wife Yasmin and their three daughters; in yet another wing, her sister Habiba lived with her husband Yaakov and their five impish kids. Farida loved her nieces and nephews as if they were her own siblings, perhaps because they were closer to her age than her own brothers and sisters. She and Violet were the youngest of the brood. Georgia, their mother, had given birth to Habiba, Farcha, and Anwar at a very young age. She then had two more children, both of whom died in infancy. After many years, the two girls were born less than two years apart, brightening Georgia’s heart and bringing her solace. By the time Farida and Violet were born, they were aunts to Edward, Habiba and Yaakov’s oldest son. The rest of the nieces and nephews came later. Eddie as he was called by everyone, was born one year before Violet, and a year and a half after Violet was born, Farida came into the world.

Spartacus by Howard Fast
The Haunted Igloo by Bonnie Turner
the Devil's Workshop (1999) by Cannell, Stephen
The Nature of the Beast: A Chief Inspector Gamache Novel by Louise Penny
The warrior's apprentice by Lois McMaster Bujold
Claustrophobic Christmas by Ellie Marvel
Birthright: Battle for the Confederation- Consequence by Ryan Krauter
The Collector by Cameron
The Lost Souls' Reunion by Suzanne Power
The Bernini Bust by Iain Pears
Our partner