Read Dawn of Steam: Gods of the Sun Online

Dawn of Steam: Gods of the Sun 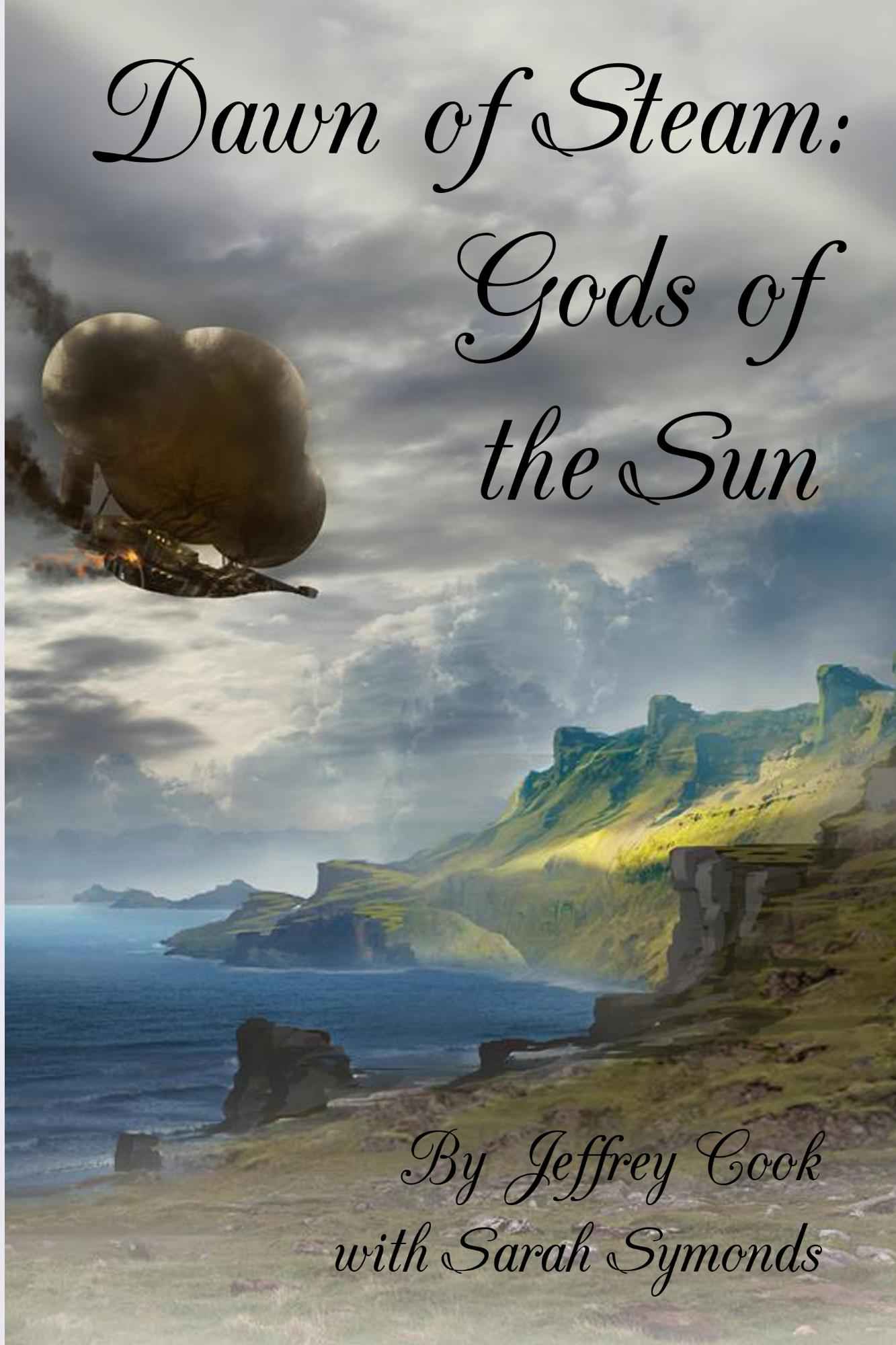 This book is dedicated to my parents. For my mother, Carol W
ellsReed, who remembers when I first said I wanted to be an author at six years old, and who has consistently supported me in that, and every other dream in all the years since. And for my father, Gerry Cook, for helping to inspire my love of story during those long road trips. Thank you.

For Matt, who willing volunteers to help with everything and the kitchen sink, who eagerly asks how the book is coming every single time I see him, and who is a better motivator then any writing forum, calendar, or pie chart I have yet found.

Peru's
Cities of No Gold

Nepal and the Mountain

As I stated in the preface to the first volume, these edited journals are intended to be a lesson in history as it happened, through the eyes of the one person who could truly claim to have been there throughout it all. I admit to my partiality to the claims of my dear departed husband to the title of explorer extraordinaire. He, of course, would be far too modest to claim any such thing. I have included those other sources, as close as possible to the events, to help illuminate those things which Gregory may not have seen or seen fit to record.

Modern readers of the late nineteenth century must remember the very true differences of the early century. The war against Napoleon had just been won, although at great cost. England and her daughter colonies had proved the superiority of their technology, although that had never been the question. It was in fact the cause. Other countries, who had never thought to provide their intellectuals with the prestige, focus, and funding bestowed at Oxford, wanted the results of those labors. The shift of the Royal Society, including its name change to the Royal Society of Oxford for Improving Natural Knowledge, was seen by all of Europe and mocked by half of it. However, when this produced not only the trend of academic robes at society balls, but zeppelins, steam engines, and tide-powered weaving mills, the laughter quieted and the plotting began.

Thankfully, due to the efforts of scientists and soldiers, we prevailed. Our colonies, some of which had so recently considered secession – but had fallen into line when the Mark 1 zeppelins flew over Boston – supported our efforts with materials and manpower. The changes brought about by this war, where every man, no matter his county, country, religion, or slavery status at birth, fought hard alongside his fellow countryman, were still new in 1815. There was potential for them to backslide, without the combined armies of Europe forcing co-operation.

Our party was in part selected for their public reputations following the treaties. Their backer, Lord Donovan, had a bet with Lord Montague, who contended the works of Dr. Bowe were fiction, for no man could have traveled so far in a lifetime. Thus, a team was assembled to look for proof the world over. Sir James Coltrane, graduate of Oxford Mechanical with honors, was famed for not only inventing his steam-powered, rocket-shooting battle suit, but piloting it into the worst of the fray at every battle. His sister, Jillian, also portrayed the Coltrane wit and charm as a star of London, and, along with her colonial cousin, Miss Harriet Wright, would accompany Sir James on their private airship, the
Dame Fortuna
. Edward McBride, known to all his friends as Eddy, was the pride of Scotland for his sharpshooting and bravery behind the lines, even if his manner and independence confused the chain of command. My dear husband, Mr. Gregory Watts, was a former
aide-de-camp
who was handed a most extraordinary camera and suddenly became a feature of the serious papers. Samantha Bowe, daughter of the famous explorer, was an unknown at the beginning of the adventure, at least to London, but her knowledge was essential to retracing her father's steps. Giovanni Franzini, a stage magician and manipulator of cards, and his fortune-telling assistant, Miss Julietta Penn, were added to round out the party skill set. The crew of the
Dame Fortuna
, headed by Captain Fisher, as well as his wife, Mrs. Ruth Fisher, and their ward, Matthew Fisher-Swift, ably managed the ship and served this most notable company.

Again, what lies within will begin as a familiar story to some people, the story of a tiny band of brave and noble souls who set out in 1815 to shine a light on the dark corners of the world. This is the story of how that band explored the western reaches of the American colonies, journeyed to the near-mythic East, helped to open Australia to expansion, and through heroic effort and sacrifice, played a heroic part in the difficult times following the Napoleonic Wars. While this is that story, perhaps only the greatest brushstrokes of its structure are truly familiar. While you, my modern readers, already know the high points of this story, the journey taken to achieve those headlines may still surprise you. It certainly surprised all those involved, myself included.

I invite you to admire this masterpiece of history up close, to see all the little bits and blobs of paint that make up the greater whole. In these details, the story truly gains its gravitas.

While speaking of gravitas, I must say this, the names of politicians and Lords, have, for the first time, not been changed to save embarrassment for the living. Those who trade on the names of their fathers may object, but these names are truly required to fill in all the details. Gregory wrote the truth, as he knew it, at the time. This shows in his characterizations, not only of Lords, but also of his compatriots. Be patient, dear modern readers, you have knowledge of
great betrayals and great loves that he does not.

The first book spanned from January 1st, 1815, to January 1st, 1816; an extraordinary year indeed. It covered a trip from London to the Pacific coast, a distance estimated as 4,300 nautical miles. The crew covered a far greater distance, setting about all of their tasks and stumbling upon an intercontinental war. By the end, at least one crew member had been converted to a true believer in their task, and the others were g
aining faith. Miss Sam Bowe cannot be said to have faith in the truth of her father's stories (as faith is for those things we believe but do not
know
). Rather, her conviction and determination to honor his name and prove his veracity showed in her actions.

This second anthology starts just after the first
, on their return trip, all the quicker for its lack of walking.

Notes on the Overseas Edition

My good reader, I hope you will understand when I inform you that the edition of this history for overseas print has been slightly edited. Specific locations of Military Bases and Advanced Mechanical Workshops have been removed, as have the few photographs showing dirigible controls or technical drawings. Colonial citizens may view more information on these topics at their local universities, should you be blessed with such, or at Cambridge. As always, complete information is at Oxford, and those who apply for clearance to study there may see the unaltered documents, as well as working models, in the Bowe Memorial Wing of the Second Coltrane Building. I do recommend at least three days for the visit, should you be in the area.

Note from the American Publishers

The American Publishers of this history wish their readers to know that the spellings and punctuations have been modified from Dr. Cordelia Bentham-Watts manuscript, and thus from the original documents. This has been done in accordance with the delineated differences between the two varieties of written and spoken English, as Codified most recently in the Cambridge English Dictionary, Complete Volumes, Issuance 1890. In places, colloquial emphasis via capitalization has been left for edification of the original intent.

I included, again, that very extraordinary piece of paper found tucked into Gregory's journal. It is the original listing of things which the explorers were intended to prove. The depth of the mission can be seen from the
underlined
entries, copied from the original.

This listing started as a simple advertising broadsheet, printed as an index of Dr. Bowe's novels. One can easily see why credible sources think that such exploration is far beyond the capabilities of a man's lifespan.
The
Journals of Dr. Bowe
were widely read in the 1810s, as an escape when travel was restricted due to the war. Those who did not skip the first volume of my humble series will recognize a few of the marked objectives as having been attained, perhaps in more depth than intended.