Read Dawn of the Demontide Online 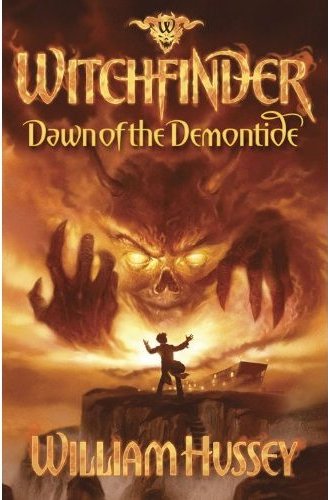 For Johnny, my nephew,
whose magic surprises me every day.

Great Clarendon Street, Oxford OX2 6DP Oxford University Press is a department of the University of Oxford. It furthers the University’s objective of excellence in research, scholarship, and education by publishing worldwide in

First published in this eBook edition 2011

All rights reserved. No part of this publication may be reproduced, stored in a retrieval system, or transmitted, in any form or by any means, without the prior permission in writing of Oxford University Press, or as expressly permitted by law, or under terms agreed with the appropriate reprographics rights organization. Enquiries concerning reproduction outside the scope of the above should be sent to the Rights Department, Oxford University Press, at the address above

5. Ten Minutes in the Nightmare Box

6. Something Nasty in the Boathouse

7. Dreams of the Witchfinder

8. Attack of the Hellhounds

11. The Ghost in the Graveyard

15. Whispers in the Dark

NOW Strangers at the Grange

A roar of thunder drowned out Luke’s cries. Step by stumbled step, the strangers dragged him across the bay. The boy’s pyjamas dripped with rain and his bare toes squelched in the wet sand. A rope had been tied around his wrists and, with every tug, he looked up at the figures that held his leash. Robed and hooded, the strangers appeared ghostly in the moonlight.

‘Who are you? Where are you taking me?’

No answer—just the rumble of the sea, the screech of the wind and the whip-crack of lightning.

There were three of them in all—two men and a woman. Normal human beings, Luke assumed, though he could not be sure. For thirteen years, he had grown up surrounded by tales of wicked creatures that preyed upon the young, the weak, and the helpless. Luke shuddered. Perhaps these ‘people’ were the same monsters from his bedtime stories.

Perhaps there really were such things as
demons
…

The group struggled across the rocks, keeping as close as possible to the cliffs. It was high tide and the sea had eaten away most of the shore. The crash of the waves rang in Luke’s ears and salt water stung his eyes. He tried once more to wrench himself free but the man (the demon?) that held him was strong. Luke could not escape. By the time they reached the cavern, he was shivering and soaked to the bone.

Most of the caves in the bay were just small nooks bored out by the sea, hardly big enough for a cat to creep into. Crowden’s Sorrow was the only large cavern. It had an entrance the size of a cathedral doorway and reached back further than the eye could see. Time and again, Luke had been told never to come here. It was a warning he had always taken very seriously. The cavern had a dark, dripping mouth and the stalactites that hung behind its upper lip looked like a set of razor-sharp teeth.

The group came to a halt just inside the mouth of the cave. Water fell from those fang-like rocks and dripped onto Luke’s head. He shivered as icy trickles ran down his neck and along his spine.

The cloaked figures gathered around him. Luke’s gaze passed between them. Even with the occasional burst of lightning he could not see the faces beneath the hoods.

The tall man spoke up.

Luke’s heart lurched in his chest. Since being dragged from his bed, this was the first time that he had heard one of his abductors speak. Now he forgot all about his parents, who were out of town for the weekend. He forgot about Mrs Grady, the housekeeper, who was supposed to be looking after him, but who had not answered his calls for help. He even forgot about Mildred, his little sister. All he could focus on was the man’s voice.

‘Very well,’ the woman said, her words heavy with despair, ‘but afterwards we must go deeper. Into the chamber, up the stairs, all the way to the Door. I just pray that we’re still in time. That his blood will be enough … ’

‘We’re sure that there is no other way?’ asked the third figure—a man, small and stooped. ‘You know that if we do this then we are no better than the Coven and their demons. We should keep our hands clean. We should remember the mistakes of our ancestors.’

Luke felt sick with horror. These people were neither monsters nor strangers—he knew them very well indeed. He called out their names. Only the little man flinched.

‘We have no other choice. We must act or the world will fall into darkness.’

The sea boomed, the sky shrieked.

The woman slipped a hand inside her cloak.

‘Just stop a moment and let’s discuss this,’ the little man pleaded.

Luke saw the man’s stubby fingers reach out and touch the woman’s arm.

‘There is nothing left to discuss,’ she said. ‘Can’t you feel it in the air? The Demontide is upon us. The blood—
all of it this time
—is the only way to stop it.’

‘And next time? What will we do then?’

‘We have a generation to ponder that question,’ the tall man said. ‘But only if we do this now. Tonight. Proceed, sister.’

The woman withdrew a long, curved knife from her cloak. The blade shimmered in the moonlight. Luke saw the letters carved into the hilt and began to understand what was about to happen.

‘You can’t!’ He fought against the hands that held him. ‘Let me GO!’

‘Turn him around,’ the woman instructed.

An arm locked across Luke’s chest. A hand cupped his forehead and pulled his head back. He saw the knife flash before his eyes.

Three voices rose up from behind him in a sing-song chant.

Luke could not look at the knife. His gaze swept out of the cave and into the bay beyond. Sprays of sea foam frothed around the mouth of the cavern like spittle on a madman’s lips. Little fishing boats moored on the beach broke into splinters under the fist of a mighty wave. On the far side of the bay, he could make out movement on the clifftops. Two figures stood side by side, staring down into the dark entrance of Crowden’s Sorrow. The children’s coats whipped about them as they staggered against the wind. The boy held his sister close, comforting her.

The knife swept across his throat. Pain, as bright as lightning, etched itself behind his eyes. He could feel the coolness of the blade, the sting of its brilliant edge. Blood steamed the night air and Luke fell to his knees. Sliver by sliver, the pain slipped away.

As his life left Luke Seward, the wind streamed into the cave and back out again. The murderers in their cavern, the children on the clifftop, and the people of Hobarron’s Hollow—snug in their beds—heard it as a low, mournful howl.

The teacher’s voice droned on in the background …

Meanwhile, an army of vampires flocked down from the hills.

‘
Feast, my brothers!
’ the master vampire cried. ‘
Rip out every throat! Drain every artery! Tonight we shall bathe in blood!
’

Jake licked his thumb and index finger. Resting on his knee under the desk, the comic book crackled at his touch. He turned the page to find a scene of vampire frenzy—all flared nostrils, bloodshot eyes, and bared fangs. He yawned and flipped the page.

The title of the comic shrieked out at him:
TALES FROM THE CRYPT!
Jake’s eyes widened. Amazing! Tucked inside this collection of old terror tales bought from a charity shop was the first horror comic he had ever read! The sight of that famous title, and the ghoulish image on the cover, sent Jake’s thoughts scurrying back six years. His ninth birthday. The day when his obsession with all things grisly had begun.

He remembered his dad pushing a big cardboard box across the kitchen table. With one eyebrow raised, Jake had flipped back the sides, plunged his hand into the box and brought out the first in a bundle of dusty old comics.

‘I collected this lot when I was about your age,’ his father had said, beaming. ‘They used to scare me stupid! The comic you have there was one of my all-time favourites:
Tales From The Crypt!
’

Jake stared at the cover. It showed a picture of a terrified man locked in the embrace of a zombie.

‘I treasured these comics, and now they’re yours. Happy birthday, son!’