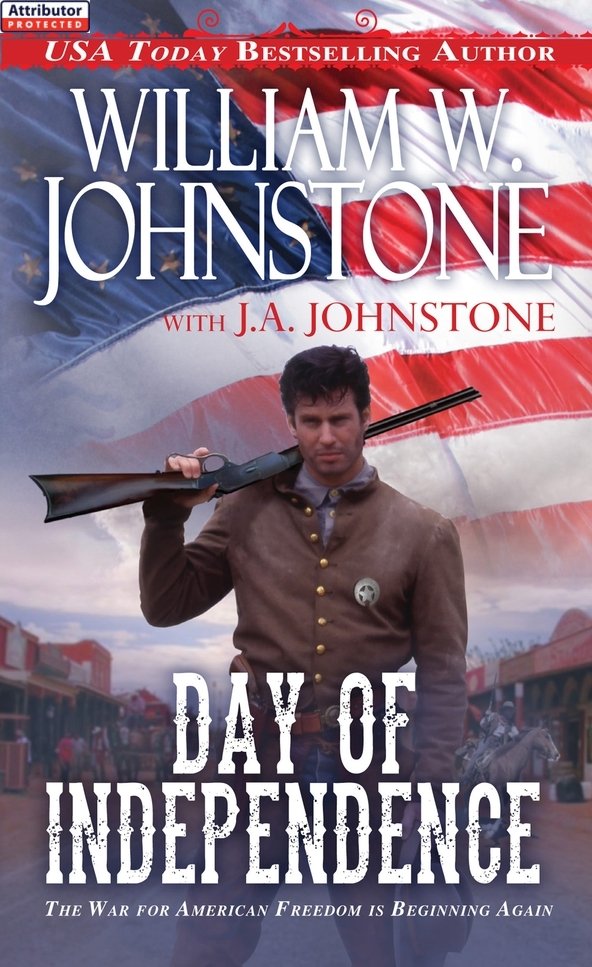 Texas Ranger Hank Cannan was in one hell of a fix.

In fact, he told himself that very thing.

He uttered that statement aloud, as is the way of men who often ride long and lonely trails.

About ten minutes earlierâCannan couldn't pin down the exact timeâa bullet had slammed into him just above his gun belt on his left side, and another had hit his right thigh.

In addition, after his horse threw him, he'd slammed his head into a wagon wheel and now, for at least part of the time, he was seeing double.

With so many miseries, Cannan reckoned that his future career prospects had taken a distinct downhill turn, especially since the bushwhacker somewhere out there in the hills was seeing single and was a pretty good marksman to boot.

The rifleman had earlier stated his intentions clearly enough, but Cannan could not bring himself to agree to his terms.

Yelling across a hundred yards of open ground, the man had demanded Cannan's horse, saddle, guns, boots and spurs, his wallet, watch and wedding ring, and whatever miscellaneous items of value he may have about his person.

“And if I don't?” Cannan called back.

“Then I'll kill you as dead as a rotten stump.”

“You go to hell!” Cannan said.

That exchange had happened a good five minutes ago, and since then... nothing.

Between Cannan and the hidden rifleman lay flat, sandy ground, thick with cactus and mesquite, but here and there desert shrubs like tarbrush and ocotillo prospered mightily.

The Texas sun scorched hot and drowsy insects made their small music in the bunchgrass. There was no other sound, just a vast silence that had been scarred by rifle shots.

Cannan, long past his first flush of youth, gingerly explored the wound on his side with the flat of his hand. It came away bloody.

One glimpse at his gory thigh convinced him that he had to end this standoff real quick or bleed to death.

But the drawbacks to that plan were twofold: his rifle was in the saddle boot and the horse under that saddle could be anywhere by now, as was his pack mule.

The second, and much more pressing given his present circumstances, was that the only weapon he had available to him was his old Colt .45.

Now there were many Rangers who were skilled with the revolver, fast and accurate on the draw and shoot.

Cannan wasn't one of them.

His colleagues rated his prowess with a Colt as fair to middling, but only on a good day, a “nekkid on the back porch” kind of good day.

Hank Cannan could never recall having one of those.

But most gun-savvy men allowed that he had at least the potential to be a widow-maker with a rifleâexcept now he had no rifle.

After his horse tossed him, he'd landed in a creosote bush and his forehead had crashed into an ancient wagon wheel half buried in sand. It had been the wheel's iron rim, still intact, that had done the damage and made Cannan see stars and, later, two of everything.

He'd hunkered down in the creosote bush and had propped up the wheel in front of him, where it provided at least an illusion of cover. But he knew he had to move soon before he grew any weaker.

His only hope was to outflank the bushwhacker and Injun close enough to get his work in with the Colt at spitting distance.

Cannan stared out at the brush flat, sweat running through the crusted, scarlet stain on his forehead.

The ground was too open. Even crouched, he would present a big target. Two or three steps, and he'd be a dead duck.

“Hey you over there!” the bushwhacker yelled. “You dead yet?”

“Yeah, I'm dead,” Cannan called out. “Damn you, I'm shot through and through. What do you think?”

“I'm a man gets bored real easy, and this here standoff is getting mighty tiresome. When do you reckon you'll pass away, if it's not asking an impertinent question?”

“By nightfall, I reckon. Depending on how I bleed, maybe a little sooner.”

“Sorry for the inconvenience,” Cannan said.

“Tell you what,” the rifleman said.

“I'll take your hoss and leave you to die at your leisure. I can't say fairer than that. What do you reckon, huh? State your intentions.”

“All I can say is that you're a good Christian,” Cannan said. “Straight up an' true blue and a credit to your profession.”

“Well me, I learned that Christian stuff from a real nice feller I shared a cabin with one winter over to Black Mesa way in the Arizona Territory. He'd been a preacher until he took up the bank-robbing vocation. We were both on the scout at the time, you understand.”

“Well, anyhoo, come spring I split his skull open with a wood axe, on account of he had a gold watch chain I wanted. I'm wearing it right now, in fact.”

There was moment's pause, then the bushwhacker said, “You're a right personable feller, a white man through and through, and it's been a pleasure doing business with you.”

He wiped away sweat and blood from his forehead with the back of his gun hand, then gripped the blue Colt tighter.

He needed a break. He needed the drop. And right then neither of those things seemed likely.

But there was one option open to Hank Cannan, stark though it was.

Better one moment of hellfire glory, bucking Colt in hand, than to slowly bleed to death in the brush like a wounded rabbit.

Cannan reached into his shirt pocket and found the tally book and a stub of pencil that every Ranger carried.

He held the little notebook against his bent left knee and wrote laboriously in large print:

DEAR JANE, I THOUGHT OF YOU TO THE
LAST. I DIED GAME, AS A RANGER SHOULD.
YOUR LOVING HUSBAND,
Henry Cannan, Esq.

Cannan read the letter, read it again, and smiled, deciding it was crackerjack.

He tore the page out of the tally book, folded it carefully, and shoved it into his pocket where an undertaker was sure to find it.

Then he rose painfully to his feet, and, his bloody face set and determined, staggered toward the hidden gunman.

He planned to keep on shooting until the sheer weight of the bushwhacker's lead finally put him down.

They say fortune favors the brave, and if that is so, Cannan caught his first lucky break.

His ambusher, a big, bearded man wearing a black coat and pants, was in the act of mounting his horse and didn't see Cannan coming at him.

He'd also slid his rifle into his boot. A fatal mistake.

The Ranger tottered forward, then the bearded man turned his head and saw him.

He grabbed for the Winchester under his knee as Cannan two-handed his Colt to eye level and fired.

It was a “nekkid on the back porch” kind of day for Ranger Hank Cannan.

He scored a hit, then as the big man tried to bring the rifle to bear, scored another.

The bushwhacker's horse did not behave well.

A tall, rangy, American stud, it reared up, and white, fearful arcs showed in its eyes. The horse attempted to shy away from Cannan's fire, and its rider cursed and battled to get his mount under control.

It was now or never for the Ranger.

A plunging, moving target is difficult to hit, and he missed with his third shot, scored again with his fourth.

Cannan had no time to shoot a fifth because the bearded man toppled out of the saddle and thudded onto the ground, puffs of dust rising around him.

Aware that he'd only one round left, Cannan, bent over from the pain in his side, advanced on the downed man. But the bushwhacker, whoever he was, was out of it.

Blood stained the front of the white shirt he wore under his coat, and the left side of his neck looked as though it had been splashed with red paint.

The man stared at Cannan with rapidly fading blue eyes that held no anger or accusation.

“I recollect you from your wanted dodger,” Cannan said. “The likeness didn't do you justice.”

“My luck had to run out sometime, I guess.”

“Happens to us all.”

“I hope your luck doesn't run out.”

“Hell, got blood all over my damned mouth.”

“You're lung shot,” Cannan said. “Saw that right off.”

Merritt had been leaning on one elbow. Now he lay flat and stared at the sky, scorched almost white by the merciless sun. He gritted his teeth against pain, but made no sound.

Then he said, gasping a little, “Who are you, mister?”

Merritt smiled, his scarlet teeth glistening. “I should have suspicioned that. You boys don't know when you're beat.”

“Goes with the job, I reckon.”

Cannan lowered the hammer of his Colt and shoved it into the holster.

He felt light-headed, and the pain in his side was a living thing with fangs.

“Why did you decide to bushwhack me, Merritt?” he said.

“I was bored. It gave me something to do.”

“You tried to kill me because you were bored?”

“Why not? I'm a man-killer by profession. Another killing more or less don't make much of a difference. I've already gunned more than my share.”

“Merritt, I don't much like talking harsh words to a dying man, but you're a real son-of-a-bitch and low down.”

The gunman was barely hanging on, and gray death shadows gathered in his cheeks and temples. His gaze was still fixed on the sun-scorched sky, as though he wished to carry that sight with him into hell.

Merritt's words came slow, labored, like a man biting pieces off a tough steak. “Where you headed?” he said.

“What manner of man?”

“Then he'll head for Last Chance.”

“A town on the Big Bend, down by the Rio Grande.”

“There are no towns in this part of Texas. Nothing for miles around but sand, cactus, and rock.”

Cannan tensed as Merritt reached into his coat, but the man brought out only a gold double eagle.

“Ranger, take this,” he said. “Make sure they bury me decent.”

The coin slipped from Merritt's fingers and dropped into the sand.

“I'll send you to your reward in a good Christian manner, Merritt,” Cannan said.

But he was talking to a dead man.

Half a Crown by Walton, Jo
The Cowboy Next Door by Brenda Minton
Saint and Scholar by Holley Trent
Undertow by Elizabeth Bear
FanningtheFlames by Eden Winters
The Not-so-Jolly Roger by Jon Scieszka
Book Fair and Foul (Ashton Corners Book Club) by Erika Chase
Raylan by Leonard, Elmore
Nevada by Imogen Binnie
A Promise to Remember by Kathryn Cushman
Our partner