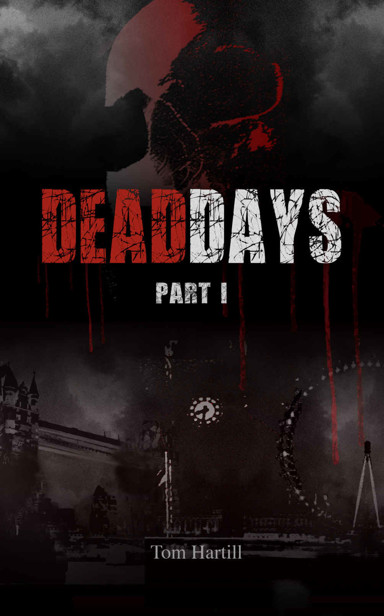 The alarm hits my ears like a jack-hammer, it feels like someone is pushing a needle straight through my forehead and into the centre of my brain.

I slap my hand down onto the alarm clock, but I miss, and the glass of water I keep on my bedside table goes flying.  Predictably, it manages to miss the rug beside the bed and smashes into a thousand pieces on the hardwood floor.  I groan inwardly and turn to the empty space beside me.

This is where Tess usually is, where she
should
be.

But of course, Tess is
finito
.  The great Mike and Tess experiment has reached its logical conclusion.

Still, it’s a shitty feeling to wake up to.

Maybe I should call her?

I think about getting up and going to work.

Fuck it, everyone calls in sick once and a while, even I.T. buffs.  Besides, I have the Mac here, I can always claim ‘I’m working from home.’ I pull myself out of bed, and shuffle into the kitchen.

I like my flat, it’s light and modern, one of four in this building. I’ve only been here a few months but it feels more like home than anywhere else has.

That’s because Tess stayed here too.

That treacherous little voice, always there, niggling at me, self-righteous little prick.

Eurgh, I need coffee, my mouth is like sandpaper, and this headache is shaping up to be a real bastard.  I put the coffee through the cafetiere (another little gift from the elusive Tess) and rifle through my cabinets for some painkillers.

The fridge is looking pretty bare too, maybe I should pop to the corner shop before I ring in sick?

I throw on some tracksuit bottoms and a t-shirt.  I’ll shower when I get back.  I scoop up my wallet and keys and head off to the shop.

As I go down the stairs I pass the front doors of the ground-floor flats.  Alan, who lives in number 1A, is already thumping around, probably building another frigging bookshelf.  I hope when I retire I find a hobby that’s actually worthwhile and doesn’t piss off my upstairs neighbours.

It’s a two minute walk to the shop, and the young Asian guy behind the desk (Riz or Raz or something, I can never remember) is watching TV on the counter.  Usually he looks bored, but today he is rapt.

I pick up some cereal, milk, a loaf of bread and a tin of beans.  I don’t feel much like cooking.  I approach the counter and ask Riz/Raz for some Ibuprofen.  He reaches behind him, not looking, as his hand quests through the rows of cigarettes, booze and condoms before plucking the box of painkillers from its shelf.  He sets it down on the counter and rings through my items on the till, all the while trying to keep his eyes on the screen.

“Watching something good?”  I ask, a little peeved at the poor service.

“Yeah man, you should see this shit, it’s fuckin’ crazy.”

“Riots man, people have started looting and shit.”  He turns the screen towards me, and I glimpse a crowd of youths smashing the front window of what looks like a JD sports.

“Same thing happened a few years ago.  It’ll blow over.  London always sorts itself out eventually.”  I reply.  I expect him to agree with me, but he looks anxiously back to the screen.

“Maybe man, but this is some scary shit, might close up early today.”

I shrug and pay for my shopping.  As I walk back to the flat I hear sirens going off, more than one.  Maybe it was a good idea to stay home today.  If the rioting does get bad, it might be wise to stay off the streets.

I get back into the flat and lock the door behind me.

I kick my trainers off and turn on my mobile phone to call my boss.  My head is still thumping, saying I’m sick doesn’t really seem like too much of a stretch.  The phone rings out for a long time.  Maybe he’s not in yet.  I cancel the call and head for the shower.

I’d forgotten the broken glass and now I’ve cut my foot.  It’s bleeding quite a bit, and I don’t want to trek it around the flat so I hop awkwardly into the bathroom.  I sit on the loo and examine the cut for any tiny pieces of glass before wrapping it in toilet paper.  It stings like a motherfucker.  I limp around the bedroom picking up the remains of the glass before balancing the shards on my bedside table.  I glower at them, knowing that it’s impossible for an inanimate object to be spiteful, whilst at the same time knowing this is absolutely what has happened.

I take my shower, cleaning out the cut as best I can.  Typically I don’t have any bandages or plasters so I ball up a wad of tissue paper and put a sock over it.  That’ll do for now.  As I get dressed I notice I have a missed call from Mum.  I suppose I should call her back, or she’ll only keep ringing.

I call her number but it doesn’t connect.  I try again and this time it goes through.  She picks up on the third ring.

“Hi Mum.  Sorry I missed your call, I was in the shower.”

“Oh?  Not going to work today?”  There’s an edge to her voice I don’t much care for.

“Hmm.”  Motherly disapproval oozes through the receiver.  “Is this one of those illnesses that’s largely self-inflicted?”

“Fine, but I’m calling to remind you it’s your father’s birthday at the end of the week and you need to at least send a card.”

“And you need to talk to Tess.”

“I mean it.  You had a good thing going there so stop being a baby and just talk to her.  You’ll regret it if you don’t.”

“It’s a bit more complicated than that-”

“Nonsense, but Mike, if you do go out be careful, those riots are still all over the news.”

“Its fine, they aren’t even near me.”

“I’ll tell him you’ll speak to him later then.”  I can hear the warning tone, I’m committed to that call now.

“Love you too, speak to you later.”

The phone beeps as the call ends.

I think about calling Tess but decide against it.  She’s probably on her way to work now anyway.  I pour myself some cereal and flick on the T.V.  The news is on, covering the riots.  The report shows a line of policemen holding back a surging crowd, somewhere in Clapham.  It looks pretty violent, some of the people are bloodied.  The reporter’s voice seems a little shaky.

“And we’re getting reports in the last few minutes that hospitals around the capital are being flooded with people caught up in the violence, as well as the beginnings of unrest in Manchester and Birmingham.  Initially thought to be racially motivated, these riots seem to be escalating both in scale and intensity.  We will of course be following the story as it develops.  We’re now going live to the Chief of the Metropolitan police for a-”

I flick the channel to a repeat of ‘Friends’.  I wash up my bowl and turn on the Mac, taking a glance out of the living room window to the street below.  I see a man packing his car with suitcases, his wife and young son helping him.

A good time to go on holiday I guess.

I look across the street to the house opposite.  A teenage girl is watching T.V. in her room.  She sees me looking and scowls, closing her curtains.  Great, now I’m a pervert.

I call work again.  My Boss’s phone rings out for a long time, and I’m just about to hang up when someone picks up the receiver.

“Hello, Phil Duncan’s office how can I help?”  The voice isn’t Phil’s, its Becky’s.  She works on my floor, has done for two years.  She’s a nice girl, not the brightest, but sweet.  I think she kissed me once at an office party.

“Mike hi!  I don’t know, to be honest I haven’t seen him at all this morning. I thought that might be him calling.”

“What do you mean?”  I reply defensively.

“Mike, hardly
anyone’s
in.  It’s just me and Darren on our whole floor.”

“I don’t know,
maybe
it’s because of the riots but you’re only the second person that’s called in.  Kevin called earlier but I think he was properly ill, he was coughing the whole time he was talking anyway.”

She lowers her voice.

“I’m thinking I might just go home, there doesn’t seem much point.  Plus Darren’s acting weird.  Someone tried to mug him this morning on his way to work and now he’s all freaked out.”

I can almost see her rolling her eyes.  Still, it is a little weird that hardly anyone went in today.  Maybe things are worse than I thought.

Suddenly I want to talk to Tess.  Just to make sure she’s alright.

“Maybe you should go home Becky, things are starting to look quite bad.”

“You think?”  She sounds suddenly nervous.

“Well, you may as well take the day right?  Everyone else is.”  I force my voice to sound cheery, but all I really want to do is hang up.

“Ok Mike, well I guess I’ll go home then, thanks.”

“Good, and just be careful on your way back.”

I hang up and immediately call Tess.  The phone goes through to her answering machine but I don’t know what to say so I don’t leave a message.  She’s probably busy, but I’d feel better if I knew she was at home.

I turn the TV back to the news.  A field reporter is interviewing a young doctor who looks pale and frightened.

“The principal cause of injury that we’re seeing here isn’t blunt force or trauma consistent with what you might expect from a riot or protest.  Most of the wounds that we are treating are actually…”

He swallows and looks off camera for a moment

“Most of the injuries we are treating at present appear to be ragged lacerations or cuts, indicative of scratches, or….”

“It’s possible that they may be… bites.”

“Bites?  Sorry doctor are you saying that these injuries are animal bites?”

My stomach drops a little as I realise the doctor is close to tears.

“The bites appear to be-”

“Turn those cameras off please.”  Another doctor, older, a consultant has walked into shot and is ushering the younger doctor down the corridor.  He turns back to the camera.  “I said can you turn those off?  We are dealing with a difficult situation and until we know more it’s not helpful to speculate on-”

The reporter cuts him off.

“Doctor, we’ve just learned that people are being admitted with bite wounds, can you tell us more about-”

“That is not the case!  As I say, we will deliver an official statement when we know more, but as I say, now is simply not-”

The sound of a crash cart can be heard off camera and a team of nurses wheel a gurney behind the doctor, a young man lying on it is having some kind of seizure.

“Doctor, do you have any advice for the public?”

“Yes, get off the streets and go home!”  He turns and follows the gurney.  The report cuts back to the anchorwoman in the studio, who looks momentarily bewildered.

“Er, there we have a slightly confused report from St George’s hospital in south London… I should apologise to any viewers at home who may have been offended by anything shown in the last few minutes.  It is er… now being suggested that some of those injured in the riots may have been……. bitten, however at this time it is impossible to say whether this claim can be substantiated-”