Read Dead In The Morning Online

Tags: #Dead In The Morning

Dead In The Morning 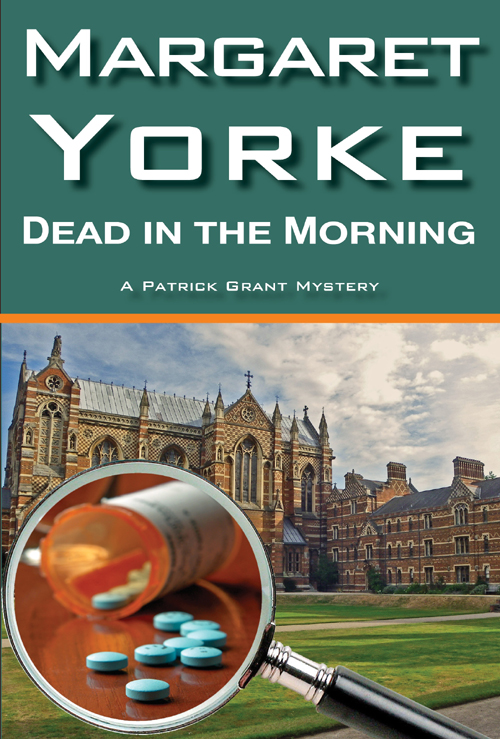 Dead In The Morning

The right of Margaret Yorke to be identified as the author of this work has been asserted.

This edition published in 2012 by House of Stratus, an imprint of

Born in Surrey, England, to John and Alison Larminie in 1924, Margaret Yorke (Margaret Beda Nicholson) grew up in Dublin before moving back to England in 1937, where the family settled in Hampshire, although she now lives in a small village in Buckinghamshire.

During World War II she saw service in the Women’s Royal Naval Service as a driver. In 1945, she married, but it was only to last some ten years, although there were two children; a son and daughter. Her childhood interest in literature was re-enforced by five years living close to Stratford-upon-Avon and she also worked variously as a bookseller and as a librarian in two Oxford Colleges, being the first woman ever to work in that of Christ Church.

She is widely travelled and has a particular interest in both Greece and Russia.

Margaret Yorke’s first novel was published in 1957, but it was not until 1970 that she turned her hand to crime writing. There followed a series of five novels featuring
Dr. Patrick Grant
, an Oxford don and amateur sleuth, who shares her own love of Shakespeare. More crime and mystery was to follow, and she has written some forty three books in all, but the Grant novels were limited to five as, in her own words, ‘authors using a series detective are trapped by their series. It stops some of them from expanding as writers’.

She is proud of the fact that many of her novels are essentially about ordinary people who find themselves in extraordinary situations which may threatening, or simply horrific. It is this facet of her writing that ensures a loyal following amongst readers who inevitably identify with some of the characters and recognise conflicts that may occur in everyday life. Indeed, she states that characters are far more important to her than intricate plots and that when writing ‘I don’t manipulate the characters, they manipulate me’.

Critics have noted that she has a ‘marvellous use of language’ and she has frequently been cited as an equal to P.D. James and Ruth Rendell. She is a past chairman of the Crime Writers’ Association and in 1999 was awarded the
Cartier Diamond Dagger
, having already been honoured with the
Martin Beck Award
from the Swedish Academy of Detection.

The only sound in the room came from an ornate clock on the mantelpiece as it marked the passing seconds with sharp, relentless clicks.

It was twenty minutes to three.

Mrs Ludlow sat fidgeting in her chair. Everyone else was out, except Mrs Mackenzie the housekeeper, who had wheeled her into the lift and transported her downstairs after her daily rest; now she was in her room, doubtless writing today’s instalment of the fat bulletins she posted twice a week to her married daughter in Winnipeg. It was a marvel how she found so much to say.

There was nothing to do. Irritably, Mrs Ludlow fumbled with the knobs of the portable radio that stood on the table beside her, among a heap of books, playing cards, photographs and letters. A droning voice filled the room, and some moments went by before Mrs Ludlow understood what the monotonous tones were describing: the joys of making tomato chutney, seasonable now that it was too late for the fruit to ripen out of doors.

“Ugh, twaddle,” said Mrs Ludlow, who had never made a pot of any preserve in her life. She switched off the radio and drummed her fingers on the arm of her chair. Whom could she ring up? Who was at home now to answer if she dialled them? She frowned, staring out of the window. It was a sunny day in late September, a day for the garden; presently Mrs Mackenzie would wheel her out, with a rug tucked over her thin old knees, for a little air before tea, but meanwhile there was nearly an hour to occupy.

Where was Phyllis? Mrs Ludlow couldn’t remember. She tried to recollect what day of the week it was. Her own routine never varied; only that of the other members of the household changed from day to day.

Yesterday, Mrs Mackenzie had gone to London, so it must have been Thursday, her day off. She always went to visit her son who had a tobacconist’s shop in Clapham. Today was therefore Friday, and Phyllis must at this moment be in Fennersham having her hair done, for that was how she spent every Friday afternoon, and a great waste of time and money too, thought her mother; she always came back with her grey hair tinted a ridiculous ashen shade, and her face and neck flushed brick red by the drier.

Cathy was out playing tennis. It was just as well to have the child kept busy today, thought Mrs Ludlow, at last admitting what was on her mind. She picked up a letter from the table and read it for the twentieth time. She could see perfectly without spectacles, but seldom subjected her eyes to strain, for one of Phyllis’s duties was to read to her for hours at a time, often late at night after everybody else had gone to bed. Mrs Ludlow enjoyed biographies of eminent Victorians, whilst Phyllis’s own taste ran to historical novels, which she lapped up one after the other in her bedroom, burning her light into the small hours. Her mother knew this, as she slept with her own curtains wide, and if she were wakeful could see the light from Phyllis’s room shining across the garden, for the house was built in the shape of an L. She knew, too, that Phyllis’s literary likes had not changed since she was a girl, a large, lumpy creature who spent hours lying in the garden immersed in a lot of romantic nonsense. Mrs Ludlow had found her an unsatisfactory child, and was scarcely surprised that she had made a disastrous job of her adult life.

Her thin hand, the back mottled with large brown pigmentations, shook a little as she laid the letter back on the table. She was upset, and somebody else must be made to share her disturbance. She thought of Betty, her daughter-in-law, who lived five miles away on the other side of Fennersham, and who was sure to be out in the garden now, ferreting about among the weeds in the shrubbery or somewhere. It would be very annoying for Betty to hear the telephone bell and have to come indoors to answer it, doubtless scattering mud from her shoes as she hurried to the summons. She would naturally hear it, for an outside bell had been fitted for this very reason, so that Mrs Ludlow might never call unanswered.

There was plenty to discuss. She could ask Betty about her sons. Tim was sure to be worrying her in one way or another, either by failing more exams, or by going about with long shaggy hair, garbed in fancy dress. Oxford seemed to be doing him no good at all. And Martin, Betty’s elder son, had last year married an alarming girl with very short skirts and boot-blacked eyes, who was bound to be leading him a dance by now, altogether.

Betty could be given a bad half-hour on the telephone before Gerald’s letter need be mentioned. By the time all available topics for conversation had been exhausted, Mrs Mackenzie would be ready to take her out in her chair, and if Betty were too down-hearted by then to go back to her garden, that was of no account.

Mrs Ludlow stretched out her hand for the telephone.

Helen Ludlow gazed from the window of the Alitalia plane through gaps in the clouds at her first sight of England.

“It’s like a patchwork, so neat,” she said. “Aren’t those meadows just tiny?”

The plane’s engines changed their note as the run-in towards Heathrow began.

“You might see Windsor Castle, if you keep looking,” said her husband. “It’s a splendid curtain-raiser to this island.”

Helen peered out at the doll-sized fields and houses spread below. Roads and rivers threaded them like ribbons, and match-box cars and lorries moved like marching ants.

“We’ll soon be coming down,” she said. “What time will we get to Pantons, Gerry?”

“About half-past nine, if the customs don’t hold us up,” said Gerald. “Nervous?”

“A little, I guess,” Helen admitted. “What’ll they think? After this long, your family will have had a real surprise. And Cathy may resent you getting married again. Supposing she doesn’t like me?”

“She will, darling,” Gerald said. He took her hand and clasped it firmly. “And everyone’s had time to get used to the idea by now. We’ve been married three whole weeks, do you realise that?”

“It will go on being wonderful,” Gerald said. “This is just the beginning.”

He sat relaxed as the plane slowly descended. This moment in a flight always made him think, not altogether incongruously, of the line from Deuteronomy: “Underneath are the everlasting arms”, so aware did he become of the power of the machine in which he was travelling. He leaned back in his seat, holding Helen’s hand, quietly content.

He had never expected, at his age, to have another opportunity of finding personal happiness. In the ten years since Cathy’s mother died, he had managed well enough, dividing his time between the flat in London and Pantons, where he had a weekend cottage converted from the former stables. Cathy lived in the big house, cared for by her aunt Phyllis and criticised by her grandmother, while Gerald carried on two distinct lives. In the country his existence was calm and uneventful, in London much more hectic, marked with transient diversions; there had always been women, but he had never been able to feel more for any one of them than a physical attraction occasionally reinforced by some casual affection.