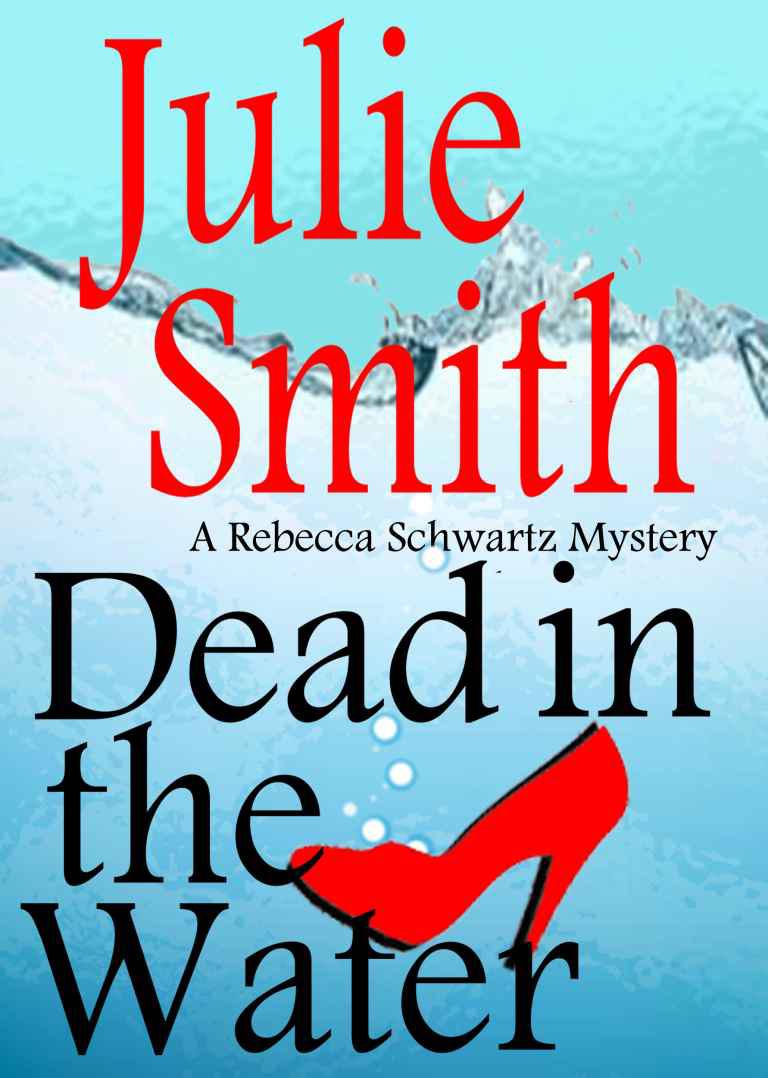 Praise for DEAD IN THE WATER, the FOURTH book in the Rebecca Schwartz series  by Edgar-winning author Julie Smith:

“If you haven't discovered Smith yet, now is the time to do so… Move over, Sara Paretsky.”

“Smith is a gifted writer.”

“Julie Smith writes like jazz should sound—cool, complex, and penetrating right to the heart.”

DEAD IN THE WATER is the FOURTH Rebecca Schwartz Mystery.

THE KINDNESS OF STRANGERS

Dead in the Water

eBook editions by eBooks by Barb for booknook.biz

For Aliza P. Rood, a friend of the sea otter

It was one of those days in Monterey when the air is washed and polished like a lens. The sunshine had a goldy look and the red geraniums burned the air around them. The delphiniums were like little openings in the sky. There aren’t many days like that anyplace.

Sometimes in the life of a lawyer (even one as dedicated as I), there comes an overpowering urge to be under the sea, not so much in an octopus’s garden as in a hermit crab’s.

I indulge this fantasy vicariously, by keeping a one-hundred-gallon saltwater aquarium in my living room. A lot of people think I’m weird.

Marty Whitehead was weird, too.

It was late August when she called that last time, and I was staring out my office window thinking how odd it was to feel so empty and sad on such a beautiful day. I didn’t want to make nice over lunch. I wanted to hole up like a hermit and be as crabby as I liked.

“Gosh-I’d-love-to, so-sorry, I’m-booked,” I said, or something close enough. I’d said it a lot lately and I was getting it down pat.

“I’d really love to, but I’ve got to try this case tomorrow and I could probably be ready sometime in October if I worked every minute. One of those things, maybe next time …”

“Oh.” Her voice was low and gave nothing away, but something didn’t feel right.

“Marty, is anything wrong?”

Rob Burns hadn’t dumped me, exactly, but it was our relationship that had me in the dumps, and you know what they say about misery. I had the damn drink with her.

My true love had gotten a Nieman Fellowship and had already left for Cambridge to find an apartment. I knew that Nieman Fellows returned from Harvard after a year; and that, like anyone else in this great country, they were free to receive visitors during their year. And I knew that a Nieman was about as prestigious as anything in journalism and that this was the high point of Rob’s career. So why was I so sad?

Because I knew it was over, that’s why. Rob didn’t know, but I did. I wasn’t sure what the problem was, exactly. The easy explanation was that I felt he cared more about his job than he did about me. He was a reporter for the
Chronicle
—a workaholic who could forget dates and cancel weekends when he was on a good story. But I had a nagging feeling that was only an explanation of convenience.

There was my half to think about, too. I found myself more and more haunted by ugly questions, questions like “What’s wrong with me?” Or worse: “Am I really so unlovable his job looks better?”

Since I like to think of myself as an independent, capable, Twenty-First-Century kind of woman, these clingy thoughts, so suggestive of poor self-esteem and emotional dependency, weren’t comfortable, to say the least—even buried deep, which was where I carried them. You bet I kept them deep. No Rob Burns or anybody else was going to view the spectacle of Rebecca Schwartz begging and nagging.

It was going to be an awful wrench. If anything, the Nieman made the whole thing easier, because he’d be gone in a natural way while I got used to the idea—but not having him around was going to be hard as hell. It already was. He’d only been gone a week and I was moping about so unproductively that Chris Nicholson, my law partner, was begging me to take a vacation and make it official. My sister Mickey, able to tell by my eyebags how badly I was sleeping, had shown her concern by giving me some Seconal prescribed for her after a miscarriage.

Our smart-aleck secretary, Alan Kruzick, had hung the office in black the day before Marty called—you’d have thought it was someone’s fortieth birthday. Kruzick, one of The King’s most loyal subjects, had an Elvis song for every occasion. His favorite trick was to greet me with the song of the day, flipping the switch when I walked in. The day of the black office, it was “Heartbreak Hotel.” Normally I would simply have picked up the nearest chair and heaved it at him. That day I broke into tears.

So I was easy prey for Marty. She was someone who’d be so busy crying in her own beer, she wouldn’t mind if I did the same. In fact, she was so much worse off than I was that I could almost forget my own troubles. I didn’t for an instant buy that “really okay” garbage.

We’d met at a party. “Marty,” said our host, “has an aquarium even bigger than yours.”

Already I liked this woman. Saltwater aquariums are much rarer and tougher to maintain than freshwater ones. “How many gallons?”

“Let’s see. Nearly three-quarters of a million, I think—if you count all three tanks.”

Our host, I saw, had been putting me on. This was no living room fishbowl we were speaking of. “You must live in Monterey,” I said.

The Monterey Bay Aquarium is one of the wonders of the world. I was momentarily filled with envy.

“How marvelous!” I blurted. “And how are ‘the lovely animals of the sea, the sponges, tunicates, anemones, the stars and buttlestars, and sun stars—’”

Marty took up the quote from
Cannery Row
“‘—the bivalves, barnacles, the worms and shells, the fabulous and multiform little brothers—’” She stopped, looking exhausted. “And so on. My favorites are the anemones.” Mine, too—Marty was making big points, but she didn’t even stop for air. “You should see what we got this week—a wonderful, funny Mola mola. It’s so ugly you want to take it home and kiss it.”

“But molas are open-ocean fish.”

She shrugged happily. “Now and then they wander into the bay, looking a little like bewildered Frisbees.”

Pleased with himself, if a little mixed-up, our host had drifted on, knowing he’d delighted a couple of aliens who’d found someone with whom to speak their native tongue.

Marty and I could have gone on about bivalves and barnacles for hours (and did for the better part of one), but our respective escorts eventually caught up with us—Rob and Marty’s husband, Don.

When the gents turned up, the conversation swung, as it often did when Rob made a new acquaintance, to why the
Chronicle
was such a bad newspaper. Since Rob thought it quite a good paper and adored working there, it might be imagined this was not his favorite subject. But he was infinitely good-natured about it, and even persuasive as to his own view. And so he and Don hit it off as well.

The four of us went to dinner after the party, and Marty and Don swore to have us down to Monterey for a weekend. But Don was always traveling, it seemed. Anyway, it never happened. On the other hand, Marty and I usually got together for lunch or drinks whenever she was in the city.

Now she had a dead marriage and two children—ages ten and twelve—who were sure to be as brokenhearted as she was. If you thought of the marriage as a fifteen-year investment, she also had fifteen years down the tube.

As we drank—she had white wine (quite a few glasses of it), I had red—I got the whole story, probably now in its hundred-and-ninth telling: “It was so
sudden
, Rebecca. There was no way to see it coming, no way to prepare.

“One day he came home and said we had to talk. I’d gotten off early and I was making vegetable soup. He said he’d fallen in love with somebody else and he was moving out.” She shrugged. “And that was that.”