Dead Man on the Moon 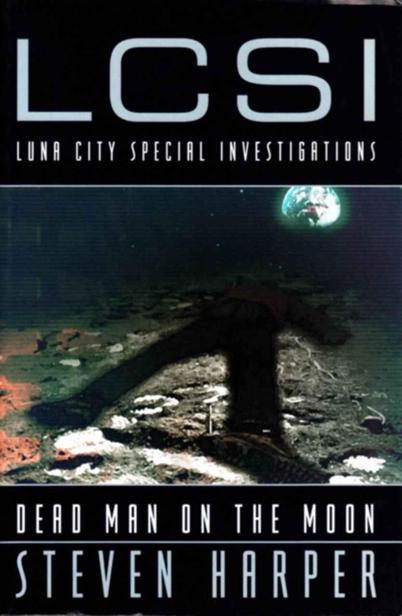 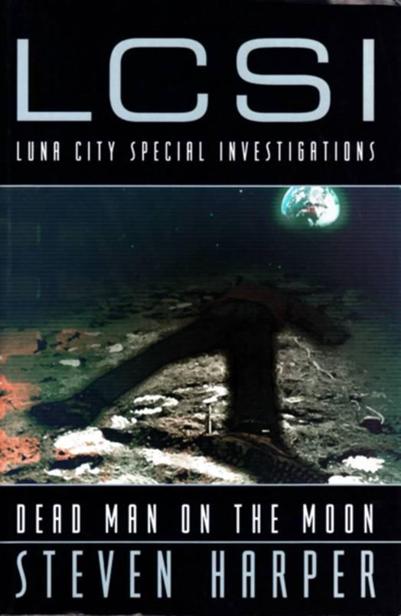 An Imprint of Phobos Books

All rights reserved
under International and Pan-American Copyright Conventions. No part of this book may be reproduced in any form or by any electronic or mechanical means, including information storage and retrieval systems, without written permission from the publisher, except by a reviewer who may quote brief passages in a review.

The characters and events in this book are fictitious. Any similarity to actual persons, living or dead, is coincidental and not intended by the authors.

*&
The paper used in this publication meets the minimum requirements of American National Standard for Information Sciences—Permanence of Paper for Printed Library Materials, ANSI/NISO Z39.48-1992.

Scanned and Proofed by ebookman version 1.0

Thanks go to Dr. Tim Smith for his advice on gravity, inertia, and orbits. I also need to thank Frank Saul, Julie Saul, and Dr. Carl Schmidt (Chief Medical Examiner for Wayne County, Michigan) for information on the effects of total vacuum on a human corpse. Any mistakes in the book are necessarily mine, and not theirs. And finally, gratitude forevermore to the Untitled Writers Group (Elizabeth Bartmess, Karen Everson, Anne Harris, Jonathan Jarrard, Lisa Leutheuser, Erica Schippers, Catherine Shaffer, and Sarah Zettel) for critiques, snacks, and general hilarity.

The itch was still there, right between Natalie's shoulder blades. It felt like a prickly feather brushing her skin. The more she tried to ignore it, the worse it got. Her skin twitched, and she shifted around, hoping the fabric of her shirt would scratch the spot. No dice. The slight whisper of cloth over the spot only aggravated the feeling. The itch screamed for relief, begged for a deep, satisfying scratch like a dehydrated man begged for water. Natalie Espinoza grimaced. A half-second scratching would take care of the problem, but no such thing would be available until she went through an airlock, disconnected all the tubes, and climbed out of her space suit.

Natalie knelt next to the core sampler, a machine that looked like a table lamp that had lost a fight with a microscope. She checked the hollow tube that pressed against the regolith—the moon's surface—to be sure it was positioned properly, then stood up. The push to her feet was a little too strong, and it sent her bobbing upward a little too fast. Her
boots left the ground for a moment before she dropped back down to earth. Or Luna, she supposed.

Bill Hayes, her partner, reached out a gloved hand to help her, realized she didn't need it, and pulled back. Behind him, Earth had risen about halfway up the horizon, well over the lip of the crater. The oceans and continents of the Eastern Hemisphere glowed blue, green, and brown amid a backdrop of hard white stars. It was actually quite pretty. Or it would be, if the damned itch weren't spoiling it. Natalie wiggled again, but it continued to nag at her like a stubborn imp.

"Still adjusting to the gravity?"
Bill's voice asked over the corn-link. The darkened faceplate of his helmet hid his expression, but she read helpful concern in his voice. Lately Natalie had been wondering if he was harboring a small crush on her. When her thesis advisor had sent her out for yet more core samples, Bill had been quick to volunteer his help, even though such menial work was well beyond the purview of a doctoral candidate like him. And there were other signs—standing a little closer to her than circumstances required, offering small favors, looking at her when he thought she didn't notice. It was only a matter of time before he asked her out.

"I'm getting there," Natalie replied, her voice bouncing around her helmet's interior. "What's worse is the itching."

"Every time I climb into one of these stupid suits, my back starts to itch," she complained. "It drives me crazy."

"Don't!"
he begged, holding up gloved hands.
"You'll get me feeling it."

Natalie smiled, though now her right cheek was starting an itch of its own. It was purely psychological. Had to be. But knowing this fact didn't help in the slightest. To distract herself, she gestured at the sampler crouching at her feet.

"I think this one's ready," she said. "Where should we put the other one?"

"Dr. Gu said he wanted the samples taken at least fifteen meters apart,"
Bill reminded her.
"And he wanted half of them
taken from the shade. We've got three samplers in the sun, so let's start on the shade.
"

"Okay. You stake out a spot, and I'll get another sampler."

Without waiting for an answer, Natalie loped over to the crater wall. It slanted steeply upward, and the gritty slope was strewn with fist-sized gray rocks. The lip of the crater only came to the top of her head. Natalie leaped upward, bounding in a single leap to the edge of the crater and touching down in a perfect landing. A small smile crept across her face—maybe she was finally getting the hang of this. She strode toward the wagon, feeling like a child playing a game.

The wagon, a larger version of the red flyers kids still used back on Earth, held three more samplers. Natalie lifted one without effort. On Earth it would have weighed about thirty kilos, but here it barely topped five. She headed back to the crater, which was exactly sixty-seven meters across. Natalie knew because she had measured it. Below, Bill had almost reached the thin crescent of the shady side. Overhead, the sun made a harsh, white disk that showered the landscape with deadly light. Without an atmosphere to blunt the sun, every rock and crater cast a shadow sharp as a knife. The comparison made Natalie shudder just a little. If her suit ruptured and failed to repair itself, she would be unconscious within ten seconds and dead within ninety. The itch between her shoulder blades flared again.

Natalie was just about to jump back down into the crater when Bill started shouting into the corn-link.
"Oh my god! Oh Jesus! Shit! Natalie! Oh god—Natalie!"

Natalie's heart jerked. She dropped the sampler and leaped into the crater, breath coming harsh within the helmet. Raw sunlight hammered down on her from above, and Bill had moved into deep shadow. Natalie couldn't see him. The metallic smell of canned air mingled with the sharper smell of her own fear.