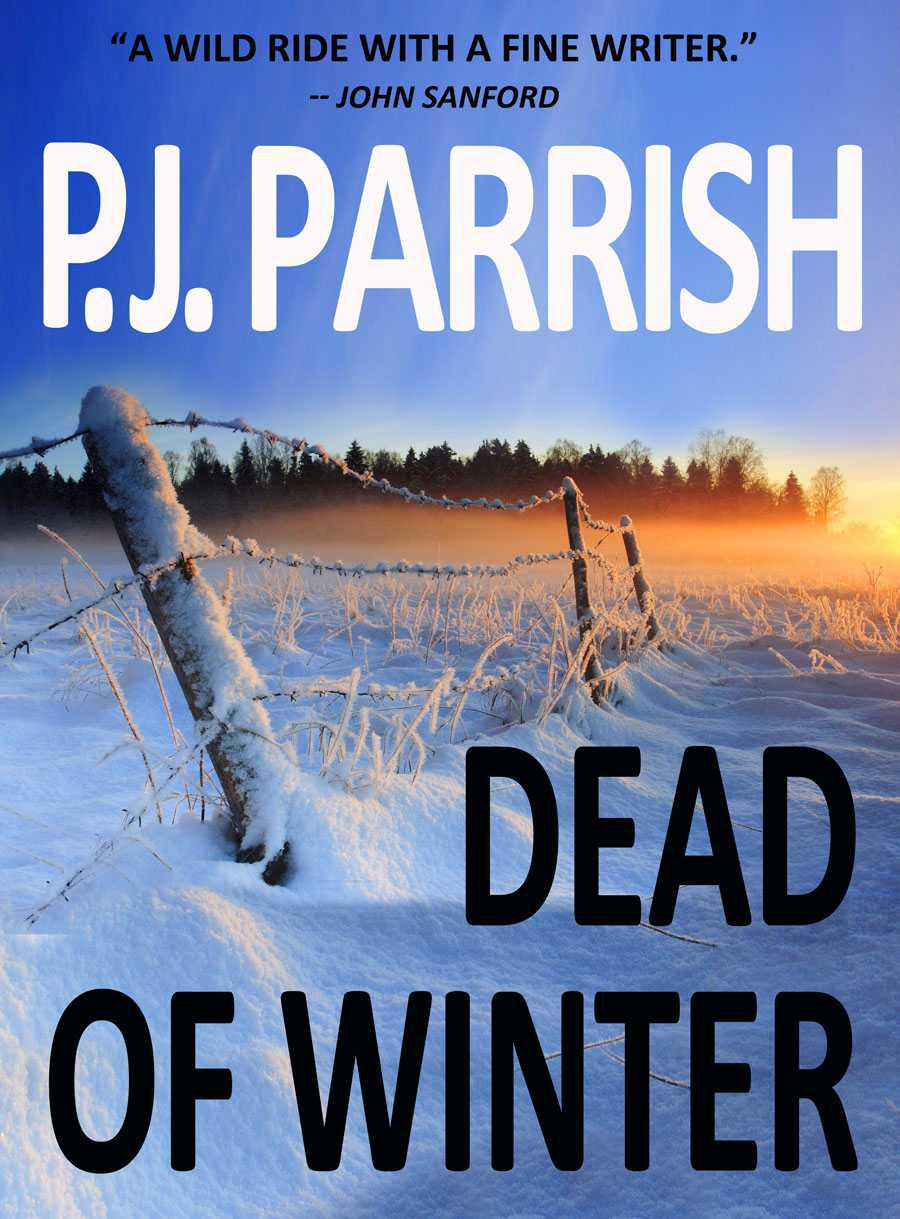 PRAISE FOR THE EDGAR FINALIST DEAD OF WINTER

“A wild ride with a really fine writer."

“Moves along briskly, pulling the reader along for an invigorating ride."

PRAISE FOR THE BOOKS OF P.J. PARRISH

"The kind of book that grabs you and won't let go. I absolutely loved it. Nobody is writing better private eye fiction anywhere than P.J. Parrish."

"Powerful stuff...The quiet sadness that underpins it all really got to me, the way Ross Macdonald always does. Among my favorite Florida crime writers are Charles Willeford, John D. MacDonald and Ed McBain. I'll have to add P.J. Parrish."

"A stunner of a book. Amazingly skilled at creating a sense of place, P.J. Parrish stays true to her characters. I can't wait to see Louis's growth as he learns more about the world."

"A gripping and atmospheric novel that will remind many of Dennis Lehane. The author's ability to raise goose bumps puts her in the front rank of thriller writers."

"A wonderfully tense and atmospheric novel. Keeps the reader guessing until the end."

"A standout thriller. It is an intriguing and atmospheric story set largely on the grounds of an abandoned insane asylum, a haunting location that contains many dark and barbarous secrets. With fresh characters and plot, an suspense novel of the highest order."

"Island of Bones opens like a hurricane and blows you away through the final page. It's a major league thriller that is hard to stop reading."

"A complex, sophisticated mystery...a guaranteed can't put down book that absorbed me as much as The Girl With the Dragon Tattoo."

“Whoever fights monsters should see to it that in the process he does not become a monster. And when you look long into an abyss, the abyss also looks into you.”

--Friedrich Nietzche, Beyond Good and Evil

This book is a work of fiction. Names, characters, places and incidents are either products of the author’s imagination or used fictitiously. Any resemblance to actual events, locales, or persons living or dead is entirely coincidental. All rights reserved. No part of this publication can be reproduced or transmitted in any form or by any means electronic or mechanical, without permission in writing from the author or publisher.

It was just a dull thud, a sound that drifted down to him as he lay in the deepest fathoms of his sleep. He struggled up to the surface and opened his eyes with a start. Darkness, and then, emerging from the shadows, a bulky form and a glint of light. He let out a breath. Just the oak bureau and his badge lying on top.

The sound had probably come from his dream, and the thought made him relax back into the pillows. But his ears remained alert for foreign sounds amid all the familiar groans and squeaks of the house.

He glanced over at Stephanie, snoring softly by his side. She always kidded him about his excellent hearing. “Tommy, baby, you can hear the snow falling,” she said. Hell, sometimes he thought so, too. He pulled the quilt up over his wife’s shoulder and swung his legs over the side of the bed.

He rose, shivering in the cold air, and went to the window.  He pulled back the drape. Sure enough, it was snowing. Already covered the yard, leaving pillows of meringue on the kids’s swing set. He gazed at the softly falling snow. First big snowfall of the season. It was beautiful.

His eyes narrowed. There was a truck parked across the street, a few houses down in front of the McCabe house. The headlights were off but he could see the trail of smoke coming from the exhaust pipe. He squinted, trying to remember if he’d seen it before. It looked to be brown although it was so dirty he couldn’t really tell. He felt his body tense slightly, that involuntary response to an unknown situation.

It was probably nothing. Maybe someone visiting the McCabes. But except for the Christmas lights around the front door, the McCabe house was dark. He squinted to see who was in the car and thought he picked out two forms. Shoot, it was probably that crazy teenager Lisa, necking with some boy just to make her old man mad.

He glanced back at the clock on the bureau. Three-ten. Late for a Sunday night, even for Lisa.

He shivered again and he knew it wasn’t from the cold. It was his body sending out its old signals, that familiar release of adrenaline.

Stephanie gave out a soft moan and he looked back at her. It occurred to him, as he watched her, that he should have told her what was going on. He had never held back things from her before and he shouldn’t have now. But she was so happy in this place and he hadn’t wanted to give her a reason to worry. This isn’t like Flint, he had told her not long after they had arrived. They don’t hurt cops in a place like this.

He hadn’t really wanted to leave his old job, especially to work in this speck of a town in the Michigan woods.  But the bullet had had taken in the shoulder by that crack-crazed kid had been the last straw. We’re safe here, baby, he told her, we’re safe here.

He moved silently to the closet. He ran his hand along the top shelf until found his service weapon, a .357 Colt Python. He checked the cylinder and with a glance back at Stephanie tiptoed out of the bedroom.

The gun was cold; he could feel it against his thigh through the thin cotton of his pajamas as he crept down the hall. Outside the kids’ room, he paused. The baby had colic and it occurred to him that it might have been just the child’s restless thump that he had heard. He strained his ears in the darkness. Nothing.

Downstairs in the foyer, the white tiled floor shimmered with a kaleidoscope of color, created by the Christmas lights outside, refracted through the leaded-glass panel of the front door. He stopped. No sound. He looked out the small window in the door but couldn’t see the truck. He let out a breath of relief and turned away from the door.

A soft tap. Someone knocking. He drew back the curtain and looked out at the face in the shadows outside.

His heart slammed up against his sternum then froze.

It was a sound he had heard before. Too many times before.

The pump of a shotgun.

Glass exploded over, around and into him. He was hurled back against the staircase. His fingers groped for the spindles but he couldn’t move. He couldn’t feel his legs. He couldn’t feel anything. Except, except...except a horrible pumping. His blood pumping out a hole in his chest.

Then he felt nothing.

The colored lights danced over the white tile, turning the shards of glass into gaudy jewels. Snowflakes swirled in through the gaping hole in the door, dying as they hit the warm blood. A Christmas wreath lay across his legs, its sound-activated battery pack sending out a tinny rendition of “Silent Night.”

A scream came from upstairs.

The man holding the shotgun looked up the staircase and then reached into his jacket and withdrew a blue-backed playing card. With a flick of his wrist, he tossed it through the hole in the glass. It spun to the floor, settling on the white tile near the body.

It was a lousy day for drive. Smog-stained sleet left dirty streaks on the windshield. Slick patches of ice sent the tires spinning for grip. It seemed to take forever for the gray Detroit skyline to disappear in the rearview mirror.

The bad weather followed him as he drove up I-75, past the sooty factories in Flint and the sodden cornfields outside Saginaw. Somewhere north of a town called Standish, the temperature dropped and the sleet turned to snow. Now it was coming down hard, flakes so big he could make out their lacy patterns on the windshield before the wipers slapped them away.

Louis Kincaid followed a snowplow into Rose City and pulled into a gas station. As he waited for the old man to fill the tank, he unfolded the wrinkled map. It couldn’t be far now, maybe twenty-five miles.

Louis nodded. “Yeah, guess you better. Got a small leak.”

The old man eyed the scarred white ’65 Mustang. “That ain’t your only problem,” he said. “that back right tire’s bald.”

Louis nodded grimly and man trudged to the front of the car and popped the hood. As he watched the man pull the dipstick, he thought of Phillip Lawrence’s warning that morning.
Take my truck, Louis, that Mustang will never make it.
It looked like his foster father was right again, which bothered him. And it bothered him that it bothered him.