Dead on the Dance Floor 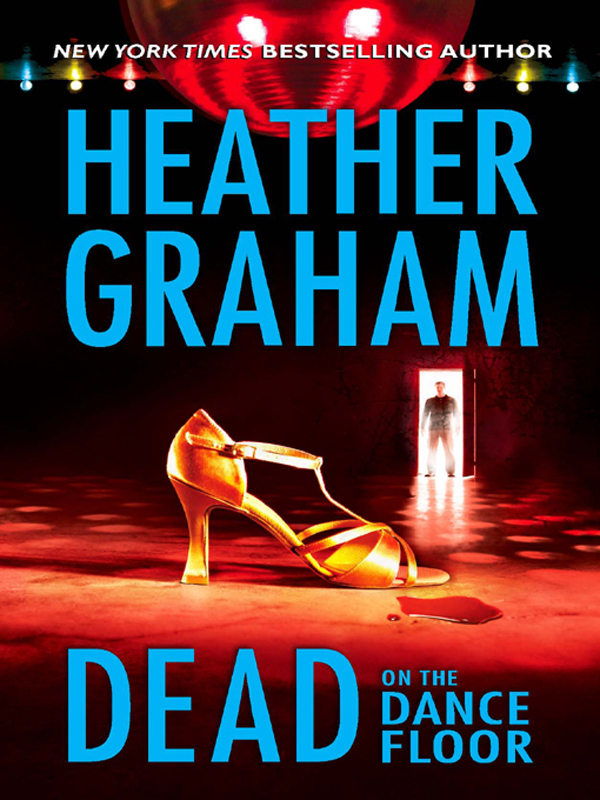 “Graham's tight plotting, her keen sense of when to reveal and when to teaseâ¦will keep fans turning the pages.”

âPublishers Weekly
on
Picture Me Dead

“Demonstrating the skills that have made her one of today's best storytellers, Ms. Graham delivers one of this year's best books thus far.”

“A suspenseful, sexy thrillerâ¦Graham builds jagged suspense that will keep readers guessing up to the final pages.”

“A roller-coaster rideâ¦fast-paced, thrillingâ¦Heather Graham will keep you in suspense until the very end. Captivating.”

“The talented Ms. Graham once again thrills us. She delivers excitement [and] romanceâ¦that keep the pages flipping quickly from beginning to end.”

âRomantic Times
on
Night of the Blackbird

“With the name Heather Graham on the cover, you are guaranteed a good read!”

NIGHT OF THE BLACKBIRD

IF LOOKS COULD KILL

Watch for the new blockbuster from
HEATHER GRAHAM

For Ana and John,
with congratulations on their tremendous successes,
and best of luck, always, in the future!

For Shirley Johnson,
with the deepest thanks for all your instruction,
your smileâand the laughter!

And for Victor,
who always does me so much better than me!
But teaches so much and, with his work, gives to so many.

T
here was always something to see on South Beach.

But tonight there was even more.

One of the largest and most prestigious ballroom dance competitions in the world was taking place at one of the best-known hotels ever to grace the strip of sand called Miami Beach.

And with it came Lara Trudeau.

She spun, she twirled, she floated on air, a blur of crystal color and grace.

She was, quite simply, beauty in motion.

Lara demonstrated a grace and perfection of movement that few could even begin to emulate. She had it all, a flair to pin down the unique character of every dance, a face that came alive to the music, a smile that never failed. Judges were known to have said that it was difficult to look down and judge her footwork, much less notice the other couples on the floor, because her smile and her face were so engaging they almost forgot their duties. They had been known to admit that they hadn't marked other couples as accurately as they might have; Lara was simply so beautiful and spectacular and point-blank good that it was hard to draw their eyes away from her.

Tonight was no exception.

Indeed, tonight Lara was more incredible than ever, more seductive, alluring, and glorious. To watch her was to feel that the senses were teased, stroked, awakened, caressed, excited and eased.

She was alone on the floor, or rather, alone with her partner, Jim Burke. During the cabaret routines, each of the couples in the finals took the floor alone, so there she was, her body a lithe example of feminine perfection in her formfitting ball gown of a thousand colors. Jim, as talented as he was, had become nothing more than an accessory.

Shannon Mackay, current manager of Moonlight Sonata, the independent studio where Lara had long ago begun her career and continued to coach, watched with mixed feelings of wry amusement, not at all sure herself whether she loved Lara or despised her. But there was no denying her talent. Even among the spectacular performances by the best and most accomplished artists in the world community of professional dance, Lara stood out.

Jane Ulrich, who had made it to the semifinals but been edged out at the end, as usual, by Lara, turned to Ben with a brilliant smile.

Shannon smiled at Jane's compliment. Jane was stunning that night herself; her figure lean and trim, and her waltz gown, a deep crimson, set off her dark coloring in a blaze of glittering fire.

“I'd rather dance with you,” Jane's partner, Sam Railey, said softly, giving her a squeeze. “You, my love, actually dance
with
someone. Lara uses her partner like a prop.”

“But she
is
brilliant, just brilliant,” Gordon Henson, owner of the studio, said. He was the one who had first taught Lara, and his pride was justified.

“Let's face itâshe's a mean, ambitious bitch who'd walk over a friend's dead body to get where she wanted to go,” said Justin Garcia, one of the studio's upcoming salsa specialists.

Next to him, Rhianna Markham, another contender, laughed delightedly. “C'mon, Justin, say what you really feel.”

Shannon nudged Rhianna and said softly, “Careful. We're surrounded by our students.” And they were, since the hotel was just north of the South Beach area where the studio was located. As a teaching institution, it was the envy of many a competitor, for not only was it located in the limelight of a varied and heavily populated area, it was situated right on top of a club that had turned into a true hot spot over the past few years, since it had been bought by charismatic young Latin American entrepreneur Gabriel Lopezâwho had come this evening, as well, in support of his friends. Due to the proximity of the event, even a number of the studio's more casual students had come, entranced to see the very best of the best, competitors from all over the world.

“She's just gorgeous,” Rhianna said loudly enough to be overheard, making a conspiratorial face at Shannon and lowering her head. Shannon had to grin.

She shook her head. “I like teaching, not competing.”

She grinned. “I know when I'm outclassed.”

“Never outclassed,” he said, and squeezed her hand.

On the dance floor, Lara executed another perfect lift, spiraling down her partner's body in perfect unity with the music.

There was a tap on Shannon's shoulder. At first, she paid no attention to it. The crowd was massive, including students, teachers, amateurs, professionals, press and those who just liked to watch. A jostle meant nothing as everyone vied for space from which to watch the spectacle.

The tap came again. Frowning, Shannon half turned. The sides of the stage were dark, cast in shadow by the spotlights on the floor. She couldn't see the person summoning her, but it might have been the waiter behind her, a man dressed in tails. Strange, tonight the wait staff, some of the judges and many of the contenders were dressed almost alike.

“Next?” she queried. But the man, whose face she hadn't really seen, was already gone. He must have been mistaken. She wasn't competing.

Shannon looked quickly back to the floor, forgetting the man who had been trying to reach her in a case of mistaken identity. She wasn't particularly concerned. Whoever was up next would know. They would already be waiting on the sidelines.

Waiting in a nerve-wracking situation. Following Lara would never be easy.

From the crowd, a collective “Ahh!” arose.

And then, suddenly, Lara Trudeau went poetically still. Her hands, so elegant with their long, tapered fingers and polished nails, flew dramatically to her left breast. There was a moment of stillness, with the music still playing a Viennese waltz as sweet and lilting as the cool air.

Then, still graceful, she dropped.

Her fall was as elegant as any dance movement, a melting into the ground, a dip that was slow, suppleâ¦.

Until her head fell to the dance floor in perfect complement to the length of her body and she did not move again.

“That wasn't in her routine,” Gordon whispered to Shannon.

“No,” Shannon murmured back, frowning. “Do you think it's something she added at the last minute for dramatic effect?”

“If so, she's milking it too far,” Gordon replied, frowning as he stared at the floor.

At first, there was a hushed, expectant silence from the crowd. Then, as Jim Burke remained standing at her side, the room began to fill with the thunder of applause.

It ebbed awkwardly to a hollow clap here and there, then faded altogether, as those who knew dance and knew Lara began to frown, realizing that they hadn't witnessed a dramatic finale but that something was wrong.

A collective “Whatâ¦?” rose from the crowd.

Shannon started to move forward, frowning, wondering if Lara hadn't decided to make use of a new ploy.

“Something's wrong,” he said. “I think she needs medical help.”

That must have been apparent, because the first person to rush forward was Dr. Richard Long, a handsome young surgeon, as well as a student at Moonlight Sonata. He fell to his knees at Lara's side, felt deftly for a pulse. He raised his head, looking around stunned for a split second, then yelled out hoarsely, “Call an ambulance!” He quickly looked down again and began performing CPR.

The room was still for a second, as if the hundreds of people in it had become collectively paralyzed with shock. Then dozens of cell phones were suddenly whipped out from pockets and purses.

Whispers and murmurs rose from all around the dance floor, then went still.

“My God, what on earth happened to her?” Gordon said, the tension in his eyes showing his inner debate on whether to rush up himself or not.

“No,” Shannon murmured, shaking her head.

“There are different drugs,” Justin said.

“She truly considers her body a temple,” Sam informed them with complete assurance. “But sometimes the temple needs a few offerings, she says,” he added. “She must have taken something. I mean, look at her.”

“I hope she's going to be all right. She's got to be all right!” Shannon said, sharing Gordon's concern regarding whether or not she should step forward.

Gordon set his hand on Shannon's shoulders. “No,” he said softly.

She stared at him, puzzled.

Yet even as she asked the question, Richard Long rose. “Clear the floor, please. I'm afraid it's too late,” he said quietly.

“She'sâ¦gone,” Richard said awkwardly, as if sorry that his words gave the final ring of reality to the unbelievable.

“Dead?” Someone in the crowd said.

Richard sighed, dismayed that he couldn't get his words to sink through the collective head of those surrounding him. “I'm afraidâ¦yes.”

The sound of sirens filled the night.

Seconds later the crowd parted and medical techs swept into the room. They added emergency equipment and a desperately administered injection to the CPR efforts.

But in the end, no matter how hard they tried, it was over. Those watching kept their distance but could not turn away.

Shannon stared at the uniformed men, frozen in disbelief, along with the others. And as she watched, unbidden, a strange whisper filtered back into her mind.

Insane. Silly. Someone had mistaken her for the next dancer to compete, that was all. Everything was a mess, Lara had fallen, but would be all right in the end. The CPR would work. She would suddenly inhale and stand up, and soon they would all be talking about her again, saying that she would do anything to create the biggest impression of the evening. She meant to be remembered, to be immortal.

But no one lived forever.

As the crowd left the floor at last, still stunned, there were murmurs everywhere.

Lara Trudeau. Gone. Impossible. And yet, she had died as she had lived. Glorious, beautiful, graceful, and nowâ¦dead.

Dead on the dance floor.