Read Dead To Me Online 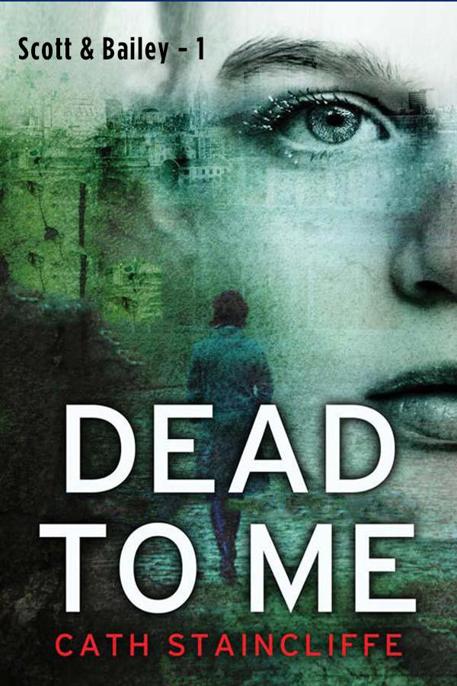 A daughter’s death
A teenage girl is found brutally murdered in her squalid flat.

A mother’s love
Her mother is devastated. She gave her child up to the care system, only to lose her again, and is convinced that the low-life boyfriend is to blame.

Two ordinary women, one extraordinary job
DC Rachel Bailey has dragged herself up from a deprived childhood and joined the Manchester Police. Rachel’s boss thinks her new recruit has bags of raw talent but straight-laced DC Janet Scott, her reluctant partner, has her doubts.

Together Scott and Bailey must hunt a killer, but a life fighting crime can be no life at all ...

For Tim – who made it possible

RACHEL BAILEY STOOD
, freezing her tits off, on a crime-scene cordon in north Manchester. From her vantage point, at the edge of the recreation ground, she had a view across the rows of rooftops that rippled down the hillside, punctuated here and there by the bulk of a mill rising from the streets built in the same red brick as everything else. One she could see had its name picked out in white brick on the square mill tower: Heron. Rachel had been brought up in streets like this; well, dragged herself up, more like. A couple of miles to the west. Sunny Langley. Manchester didn’t really stop, Rachel thought; there were boundaries of course, but you couldn’t see the join. The city bled into the satellite towns that ringed the plain: Oldham, Rochdale, Ashton and on to even higher ground. The houses gradually changing from these brick mill terraces to stone-built weaver’s cottages, getting smaller and sparser as the developments petered out on the foothills of the Pennines. The place looked tired and mucky this time of year, the brick dull, trees bare, the grass on the field yellow and scrubby.

Rachel shivered and stamped one foot then another. Sparrow’s fart, November and she could see her breath, the same colour as the mist that hovered over the recreation ground, rising and floating a couple of feet above the grass. A special effect from a horror movie, but this was real life, her life. Nowhere else she’d rather be.

Manchester city centre lay on the far horizon, muffled in cloud, the Hilton tower breaking through, a tall, straight line. Nick’s flat was near there. He would be down at the station now, Piccadilly to Euston. He was opening for the defence at the Old Bailey tomorrow. She couldn’t help grinning as she remembered his excitement last night; his chambers were really backing him, a rising star. Impossible to know how long he’d be away for. But that was the score. My hotshot barrister, she thought, not bad for a kid from the wrong side of the tracks.

She narrowed her eyes as a car drew up and parked on the edge of the outer cordon. Her role, until uniform arrived and took over, was to make sure no one gained entry who didn’t need to be there.
Protect and secure the scene, preserve and recover evidence
. One stray person could ruin everything. Today Rachel was an intelligent guard dog. She only knew the basics at this stage: dead body, white male.

Nowhere else she’d rather be. Not strictly true – she’d rather be inside the cordon than guarding the periphery.
She’d
rather be in an MIT syndicate some day. Major Incidents: running a team, catching killers. But there was no shortcut. She had to work her way up, build her portfolio. And she was on track, she allowed herself a little pat on the back. Five years in uniform, nearly five in Sex Crimes. Stepping stones, foundations for the bigger stuff. Rachel did another shuffle, waved her arms to get the circulation going. Times like these she made the best use of, alert to what was required of her, but in the lulls when no one was entering or leaving the scene she practised her definitions. Knowing the law, criminal law, inside out, upside down; because anyone who had to enforce the law needed to understand it. She was practising homicide, murder or manslaughter now. That’s where she wanted next. It was a big jump and they were queuing round the block for opportunities. She just needed a chance, an opening, and she needed to spot it before her competitors.

Rachel glanced behind her where the CSIs were still busying about, the tent now up, protecting the scene. She wanted to pee, but it could be hours. They never put that in the job description.
Candidates must be able to demonstrate significant bladder capacity
.

In the valley, a train sounded its hooter, taking people into work. Greater Manchester conurbation, home to 2.6 million people. In the police service over 8,000 cops, and Rachel was one of them, the only job she’d ever wanted. She could see the arterial roads filling up with commuters, too. The dual carriageways funnelling traffic to the M60 and the M62.
Manslaughter: voluntary
and
involuntary. Voluntary manslaughter – due to … diminished responsibility, loss of control …

She watched the new arrival, suited, booted, carrying a face mask and gloves, cross the grass to meet her. ‘Constable,’ the woman said, barely glancing at Rachel, and made to pass through the cordon.

The woman sighed, patted at her sides, then shoved a hand down the front of her disposable jumpsuit. ‘Fuck,’ she barked.

Shitshitshit
. Gill Murray. And Rachel hadn’t even recognized her. Blame the protective suit. Golden girl Gill. Though the gold had tarnished a bit since all the stuff with her husband. Rachel swallowed. ‘I still need formal identification. “The preservation of the scene is a primary responsibility”,’ she quoted. ‘“No exceptions”.’

The DCI threw up her hands, bawled, ‘No exceptions,
ma’am
!’

‘Right, ma’am.’ Rachel should have automatically added a term of respect, either boss or ma’am or chief inspector. Failing to do so gave an impression of insubordination. You never knew with bosses what they’d favour: some wanted rank and only rank, others were on first-name terms with everyone. Rachel had decided when she got to fling her weight around she’d want to be called boss. Not ma’am like some minor royalty, an old trout in a tiara.

Gill Murray flailed her hands again, turned round on the spot, first one way then the other, as if she was doing some weird robotic dance, then stalked off back across the grass.

Rachel had imagined she’d be taller, tall and slim like Rachel herself. But Murray was more petite. Looked good for her age; must have fifteen years on Rachel. Perhaps she’d had some ‘work’ done.

Inside her jacket, Rachel could feel a prickle of sweat under her arms. Stuff her, she told herself, if I’d let her through without ID, I’d have been in for a bollocking by the crime-scene manager. ‘Procedure is there for a reason,’ the instructor had drilled into them at training, ‘because it works. Brains far mightier than yours have spent years identifying how we detect and prosecute crimes. You prat about, missing a step, trying to take a shortcut and nine times out of ten you’re handing our offender a get-off-scot-free card. Do it. Do it how it should be done. Do it right.’

The DCI arrived back, her mouth screwed up tight, thrust a lanyard with her warrant card at Rachel. Painted nails, Rachel noticed, scarlet talons. There was something birdlike about the woman. Hawkish, attractive, cheekbones like scalpels, but hawkish all the same.

‘Thank you,’ Rachel said. She pulled off one of her thermal gloves and made a note in the log.

‘And your name, Constable?’ Gill Murray said brusquely, pulling on her disposable gloves with a snap-snap.

Rachel took a breath. Oh God I am such a dick. She’s gonna what … report me for doing my job? ‘DC Rachel Bailey.’

‘Working out of …?’ Nose wrinkled, as if Rachel was something she’d found on her shoe.

‘Right,’ the DCI said, a sharp jerk of her head and she stepped through to the crime scene.

Rachel put her glove back on, her fingertips stung with cold. She wanted a fag now; a fag, a pee and a bacon-and-egg sandwich. And a hole in the ground to hide in while Gilly-knickers dreamt up her punishment.

They told us there were no superior officers, Rachel thought; senior, but not superior. Reflecting a more democratic force. You weren’t supposed to say force any more either – too many connotations of police brutality and deaths in custody, riot gear. A service not a force, partnership with the people. Seemed they’d forgotten to tell Gill Murray she was no longer superior, treating Rachel like a kid who’d wet herself in assembly. I don’t care, Rachel told herself, screw her. Godzilla. But she did care really. She really, really cared, because Gill Murray – well, she’d been the one Rachel wanted to be. The one Rachel followed in the news, the one everybody agreed was a superb detective, an inspired strategist, a charismatic leader. Clever and forward-thinking. The one who had broken through the glass ceiling without a scratch to show for it. And hadn’t hauled the ladder up after her. Rachel had dreamed of meeting her, working with her someday. But now? She shook her head, annoyed, stamped her feet. The clouds were darkening, heavy and slate-coloured, blotting out the horizon. Sleet on the way. A kid on a bike circled at the edge of the outer cordon, stared over at her for a moment, then spat on the floor and swooped off.

Tosser, Rachel thought.
Infanticide … killing by any wilful act or omission of a child under twelve months old …

The call came three weeks later. Rachel was processing papers for an indecency hearing. She’d got a head cold and it felt as though all the cavities in her skull were filled with heavy-duty glue and her throat with sand. She was still in work. Never took a sickie: she might miss something.

Her phone rang and she picked it up. ‘DC Bailey.’ Checked the time, pen poised over her daybook.

Rachel waited for the blow to land. Drew a noose in her notebook.

‘I want you in my syndicate, week on Monday, Chadderton. Shift starts at eight.’