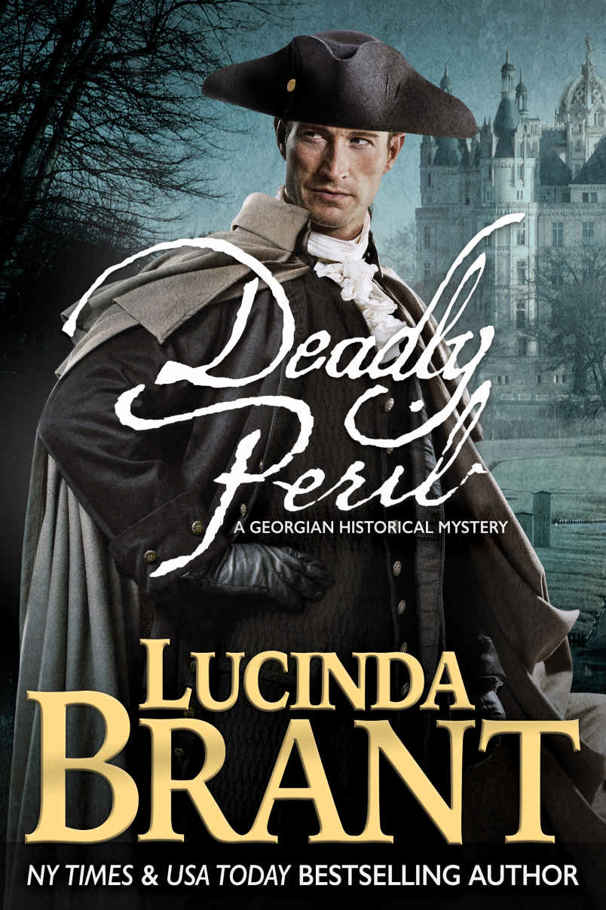 This is a work of fiction; names, characters, places, and incidents are the product of the author’s imagination or are used fictitiously. Resemblance to persons, businesses, companies, events, or locales, past or present, is entirely coincidental.

Copyright © 2015 Lucinda Brant
www.lucindabrant.com
[email protected]
All rights reserved
Except for brief quotations embodied in articles and reviews, no part of this ebook may be reproduced in any printed or electronic form without prior permission from the publisher.
Editing: Martha Stites & Rob Van De Laak
Cover art and photography:
Larry Rostant
Design, and formatting:
Sprigleaf
Cover model:
Dan Cook

eISBN 9780987243089
Also available in print, audiobook, and foreign language editions.
Please purchase only authorized editions; do not encourage piracy of copyrighted materials in violation of an author’s rights.

T
HE
B
EDCHAMBER
was dark and airless. The odor of stale urine, bloody phlegm, and medicinal, pervasive. Only one branch of candles cast a yellowed haze across the heavily embroidered coverlet from the bedside table. The wicks needed trimming but no one had bothered to call a servant. Focus was on the occupant of the big state bed with its enormous carved headboard—where all Margraves of Midanich came to die.

Leopold Maxim Herzfeld was breathing his last. Shrunken and weak, he was propped up on soft feather pillows. A white linen nightshirt with fine lace at wrists and collar covered wasted flesh, the collapsed veins in both arms hidden from view. He had been bled so often the fat-bodied leeches could suck their fill no more. In and out of consciousness, he rasped and gurgled, head thrown back and mouth wide, straining to draw breath down a tinder-dry throat to watery lungs.

A devoted servant had removed his master’s silk nightcap and in its place had arranged a magnificent wig, the flowing locks pomaded, powdered and curled, as befitted its royal wearer. In life, such an artifice to fashion complemented Margrave Leopold’s strong fleshy features. In his dying hours, the wig was a gross conceit. It served to underscore the state to which his health had deteriorated since returning to Castle Herzfeld six months ago, and why the whisperings about poison remained persistent.

A thousand candles illuminated the castle’s chapel, where prayers were said around the clock. Devout members of the court came and went, filling up the pews. Some stayed for hours, on their stockinged knees, praying for a miracle—that Margrave Leopold would recover. If he did not, civil war was likely, and this on the heels of a decade of war that had seen the country occupied first by an enemy and then by an ally, both wreaking havoc on the countryside and its people.

Other members of the court, who were not willing to leave the future in God’s hands, thought it politically prudent to loiter in the magnificent gilt and marble anteroom off the state apartments. They huddled in their court factions, arguing in fierce whispers, deciding if they would support one prince or the other, or remain neutral when civil war came. None could afford to leave the anteroom, for not only did they fear being betrayed in their absence by their friends, their movements were being carefully monitored by the household guard who lined the walls of the long room, and stood to attention at the doors to the state bedchamber.

Many a nervous courtier bedded down on a makeshift cot, sent lackeys to and fro for food and drink and to empty chamber pots. They scrawled updates to wives, mistresses, and daughters alike, who paced in their apartments within the castle complex, ready to flee with their belongings to their country estate at a moment’s notice. Some had decided to take the drastic step of crossing the border into Hanover—the only option left to them if they wished to keep their heads.

Foreign dignitaries and bureaucrats, too, shuffled in and out of the state anteroom, wanting news. No one could tell them anything, so they went away again, and sent their subordinates to rub shoulders with the bewigged throng while they wrote reports home to their masters for instructions—support Prince Ernst, make overtures to Prince Viktor, or get the hell out of there while the country’s borders and ports remained open.

Death of the Margrave was a foregone conclusion. So, too, should have been his successor. Son followed father, and had done for thirteen generations. Prince Ernst was the Margrave’s eldest son. Yet there were those who favored the more charismatic Prince Viktor taking his father’s place. But the younger half brother of Prince Ernst was barred from the succession by virtue of his common birth. The Margrave’s second marriage had been a morganatic one.

The Seven Years’ War changed everything.

Midanich was overrun by the French and then occupied by the English. Everywhere was chaos, battle and bloodshed. The end of war brought relief from battle, but not from hardship for the Margrave’s subjects. And further afield, across borders, political and economic alliances were being redefined and rewritten, and not to Midanich’s benefit. Many at court wanted a complete break with the old order, to which Prince Ernst belonged, and staked their lives on change. From his palace in the south of the country, Margrave Leopold had listened to these voices for change, and also to those courtiers who recommended the
status quo
. He had then journeyed north to Castle Herzfeld where Prince Ernst was stationed as head of the Midanich army, crossing the drawbridge and entering the main square with his entourage to the rousing cheers of his war-weary people, the obsequious bows of his courtiers, and the welcoming open arms of his eldest son.

Prince Ernst, who had fought bravely in the war, was honored in a public ceremony with the country’s highest military tribute, the Midanich Minotaur, a star and garter rarely bestowed. It was the last occasion the Margrave was seen in public. He never set foot outside the castle’s fortified walls again. Within months, the seventeenth Herzfeld to rule in an unbroken line from father to son lay dying.

The head physician had no idea what had caused the Margrave’s illness, but he was certain it was fatal. Yet the Margrave clung obstinately to life, his intermittent terror-stricken outbursts indication his mind was grappling with an inner conflict known only to himself. His physician said he was delirious. His priest said he was purging his soul of guilt. His son agreed with both of them. But no one knew what tormented him.

When the Captain of the Household Guard reported the castle’s inhabitants were becoming increasingly restless for news of their ruler, whispers of poison growing daily more confident, Prince Ernst ordered a second detachment of troops deployed throughout the castle. What happened beyond the thick walls of Castle Herzfeld was of no interest—for now.

The court chamberlain appealed to Prince Ernst to have a proclamation of some sort read out, at the very least to the courtiers in the anteroom, if only to quell disquiet amongst their number. Prince Ernst said the court could wait; death would come soon enough.

When the head physician declared death to be imminent, the prince had the bedchamber cleared of its occupants. The Margrave would spend his last earthly moments with only family present.

At the double doors the chamberlain glanced over his shoulder for one last look at the Margrave, whom he had faithfully served for three decades. What he saw made him turn and pause. It was not that his master was unrecognizable in his skeletal form covered in a thin jaundiced skin. It was that the Margrave Leopold had used what strength was left to him to lift an arm off the bedcovers and point a finger in his direction. Alarmed, the chamberlain scuttled back into the dim light, only for the Captain to hiss,

Sixkill by Robert B Parker
Harlequin American Romance May 2014 Bundle: One Night in Texas\The Cowboy's Destiny\A Baby for the Doctor\The Bull Rider's Family by Linda Warren, Marin Thomas, Jacqueline Diamond, Leigh Duncan
Magic Study by Maria V. Snyder
A Winter Flame by Milly Johnson
Casa Azul by Laban Carrick Hill
Caught Up In You 3: Designer Love and Empty Things (Edgeplay) by McCormick, Jenna
The Crossroads by Niccoló Ammaniti
Remember Me? by Sophie Kinsella
Either Side of Winter by Benjamin Markovits
Sugar Rush by Sawyer Bennett
Our partner