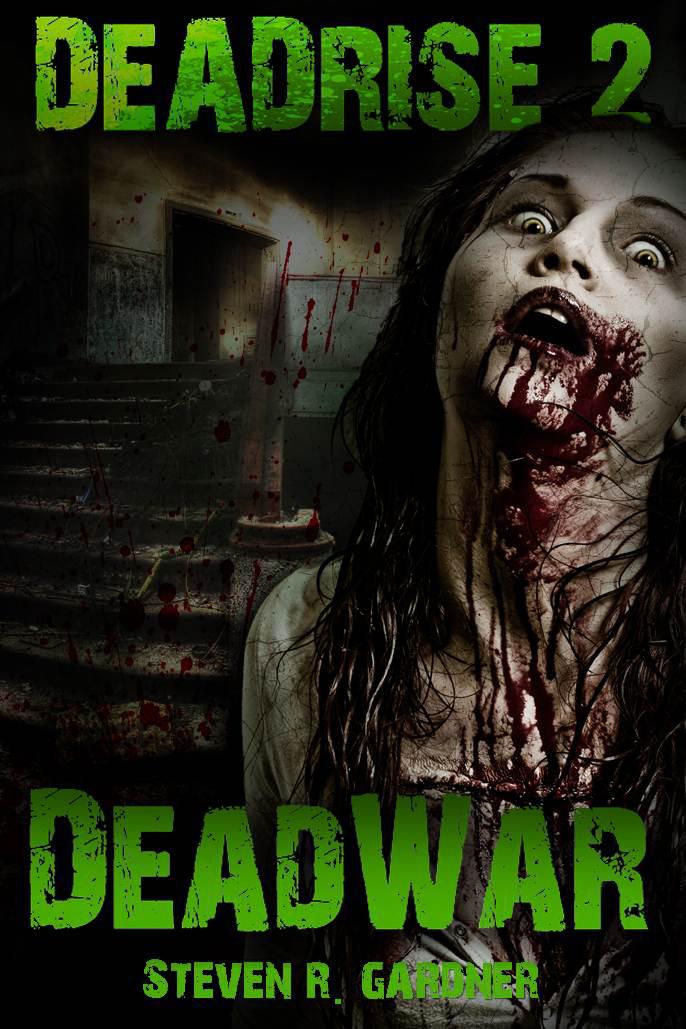 This one is for Aunt Mary...This whole zombie thing and I? It's your fault...

Even though mine is the only name on the book, a lot of people contributed in many ways. Trev Poulson (they say never judge a book by its cover but an AWESOME cover sure helps). Sergeant Nate Johnson for educating me on military structure and organization. Cynicalbit, (I don't need permission if I don't use your real name haha!) you helped with this one far more than you could ever know. Everyone who purchased DEADRISE and everyone who took the time to review it; there's no such thing as a bad review, only instructive ones. Lola, Ty, Ali & Charlie (R.I.P.) Don, Jeff, Kevin, Stump and the rest of the guys of the triple B; if there's a better bunch of men I've yet to meet them.

And in keeping with tradition and saving the best for last, my daughter Autumn for letting me know when it's time to unplug and my beautiful wife Jill for just being you. I couldn't do it with out either one of you. I truly am the most blessed man in the world. I love you both very much...

This is a work of fiction. Names, characters, places and incidents are either the product of the author's imagination or are used fictitiously. Any resemblance to actual persons, living or dead, events or locales is entirely coincidental.

This ebook is licensed for your personal enjoyment only. This ebook may not be re-sold or given away to other people. If you would like to share this book with another person, please purchase an additional copy for each recipient. Thank you for respecting the hard work of this author...

Mordecai Necrotura’s estate was as well stocked with weapons, ammunition, and supplies as Zack said it would be.

Several tons of dried and canned food, hundreds of fifty-five gallon barrels of clean water, plus enough AK-47’s, ammunition and explosives to supply a small army. As a bonus it contained a small yet ultra-modern hospital wing complete with surgery, x-ray and labs.

But true to form, despite the estates bounties, there was ample evidence of the depravities as well. Torture chambers with racks and irons, hooks and barbs on the wall and row after row of the most horrible pain infliction devices imaginable.

There was also the row of crucifixes still attached to the roof. All of the corpses had been cleared from the house and pulled down from the crucifixes. Most likely Zack’s handiwork during the three days he had stayed here.

It would take them the entire day and well into the night to catalog and inventory the estate. In the process they found several secret passages and rooms, most of which were stocked with more supplies…

While the others explored the estate, Jenkins, Commander King and Corporal Philips drove a Humvee down the canyon to the town of Kittewa. Before the deadrise Kittewa had been a sleepy little town of corn and dairy farmers, or so it had appeared. In truth many of the townsfolk had secretly belonged to Mordecai's Death Cult
The New Humanity,
while the rest had been sacrificed and crucified in his name.

The town was devoid of zombies… Mordecai and the Krylok had summoned all of them up to his estate to assault the Main House.

Kittewa was
empty…
or so they thought.

It was on the second pass, headed east down Main Street that Commander King spotted movement up one of the residential side streets. He was standing in the hatch, scanning about. He knew he was exposed to sniper fire from an Alpha, but he didn’t care. A blurred flash as someone, or
something
dashed across the street into one of the yards.

“Did you see that?” Philips exclaimed from the driver seat.

“Your damn right I did.” King gripped the handle of the mounted .50 caliber machine gun and instructed Philips to turn down that road.

“What did you see?” Jenkins asked.

“I couldn’t make it out. It was fast, too fast for a zombie. And it looked like it was wearing white.”

“Maybe it was an Alpha?” Philips said. He had only caught a flash of movement from the corner of his eye.

“One of Mordecai’s white robed fanatics?” Jenkins asked. But before he could ask another question a white sheet tied to one end of a large piece of PVC pipe jutted around the corner of the nearest house, waving back and forth. Philips brought the Hummer to a halt and Commander King aimed the .50 cal right at the edge of the house.

“SHOW YOURSELF!” Commander King called from above. The flag dropped to the ground and out stepped a group of people.

Live human beings! Five in all, clad head to toe in hunters fatigues, their faces covered by scarves and ski masks, with deer rifles slung across their shoulders and sidearm clipped to web-gear. Their hands were in the air and their meek body language suggested exhaustion and surrender.

“Don’t shoot! Please?” one of the camouflaged figures called with a deep, masculine voice. He was big in the chest and wide in the girth.

“Show your faces!” King barked. The group of people complied, removing the bandannas and revealing three men and two women.

“Who are you?” Commander King asked.

“Kittewa was cleaned out by Mordecai Necrotura. Are you servants of his?”

“NO!” several of them cried out in unison, their voices quivering with fear.

“He was the DEVIL INCARNATE!” one of them screamed.

“Mordecai Necrotura is gone from here. His army of the dead has been crushed and driven back to hell.”

“Members of our group witnessed the battle from one of the ridges overlooking Rainbow Lake.”

“You witnessed the battle?” King was surprised.

“How many are there in your group?”

“Did you ever consider helping fight?” Commander King couldn’t hide his irritation.

“Briefly, but the idea was quickly discarded. We are a small group of survivors. We are not soldiers or raiders; we are farmers and ranchers. Had we joined in the battle we would have been slaughtered and our families unprotected. It wasn’t really a choice at all.”

King gave the man a nod of grudging respect. If the roles were reversed King would have made the same choice. “Why didn’t you contact us when we first arrived at the lake?”

“At first, we believed you to be allies of Necrotura’s. When the dead first started to walk, Mordecai and his white robed murderers came through town, insisting he was the savior and demanding that we all follow him to salvation. He'd successfully brainwashed several of the townspeople over the years and they followed him blindly. Those that would not kneel and call him savior were tortured publicly, and made to confess their sins, before being crucified. Some were fed to the zombies.”

“How did your group survive?”

“We headed up into the back country as soon as the dead began to walk. We knew Mordecai’s fanatics wouldn’t be able to find us, and the terrain was too rugged for any zombies to reach us. But we kept sending scouts down to watch what was happening at the lake. Once his army of
Hellspawn
was defeated, we decided to come to town. We only came down yesterday, and only the five of us. We were checking it out; making sure it was safe for the rest of us to come down out of the mountains.”

“We were going to contact you.” Another woman said.

“That’s true.” The man said. “Once we saw that you destroyed Mordecai’s army we knew it was time to contact you…”

Despite his skepticism, Commander King felt these people were telling the truth. Their camouflage fatigues were sportsman issue, not military, and their weapons were mostly lever action deer and elk rifles. King crouched in the hatch until only his head was poking out. “What do you think?” he asked Jenkins quietly.

“I think they’re telling the truth.”

“Me too.” Philips added.

King nodded his agreement. He stood back up and addressed the man. “What’s your name?”

“That’s right. And the surrounding county.” The man nodded in agreement.

“Well Sheriff, contact your people. Gather what you need from the town, but do not stay here. It's not safe. We'll be securing it over the next few weeks, but until that time you are welcome to join us at the lake.

While Commander King continued his parlay with the townspeople Jenkins put in the call to the Main House. Sgt. Turner was manning the radio and was pleasantly surprised with word of survivors, and excited about their arrival at the lake. To his annoyance, Jenkins found himself sharing Turner’s sentiments. The losses they had suffered, the destruction of Park City, and the shocking revelations of alien invasion had combined to create a heavy, depressed mood across the group. The arrival of new survivors, new companions, would do wonders for all of their spirits.

“They’ve been up in the backwoods since this all started, so they are going to be dirty and smelly. They are also going to be hungry. Best start making preparations for their arrival now.”

And so they did. By nightfall all forty-two men women and children had arrived. Besides the Sheriff, the town doctor was also among their ranks. The refugees brought with them five RV mobile homes, three 4x4 pickups towing horse trailers, half a dozen horses, two dairy cattle, 3 large pigs, a goat, a clutch of chickens and nearly a dozen dogs. And they were dirty, and smelly, and hungry, and most of them had that shell-shocked look of having seen far too many horrors in too short a period.

The Kittewa town survivors were not the last band of refugees to flock to the lake. Just two days after taking in the townsfolk, survivors from Park City trickled in; three here, half a dozen there. Nearly fifty more had drifted in the past forty-eight hours, including a squad of the Park City military driving a Humvee. Jenkins and PFC Jimenez recognized two of them from the firefight in the Park City Military HQ. All of the survivors brought tales of horror and heroism, of loved ones lost, and new ones made. The Main House was quickly out of living space, so they made plans to expand into the estates along the shore of the lake...

Doctor Jules Reilly was a short, round-faced old man with thinning white hair and a thick white mustache. A pair of polished bifocals sat across the bridge of his nose, covering red rimmed, watery blue eyes. His face was warm and sincere and his hands cool and soft. He had gently yet firmly insisted on settling in Mordecai’s estate, so he could have easy access to the hospital facilities in the basement. The medic Norris relocated there as well, as did a dozen other refugees.

Flat Stanley’s Worldwide Adventures #12: Escape to California by Jeff Brown
Chains of Freedom by Selina Rosen
The Smoke In The Photograph by Kit Tinsley
May the Best Man Win by Mira Lyn Kelly
Brown: The Last Discovery of America by Rodriguez, Richard
The Night Itself by Zoe Marriott
Over the Knee by Fiona Locke
The One: The Complete One Series Collection by Emma J. King
My Great-grandfather Turns 12 Today by BILL DODDS
The Cipher Garden by Martin Edwards
Our partner