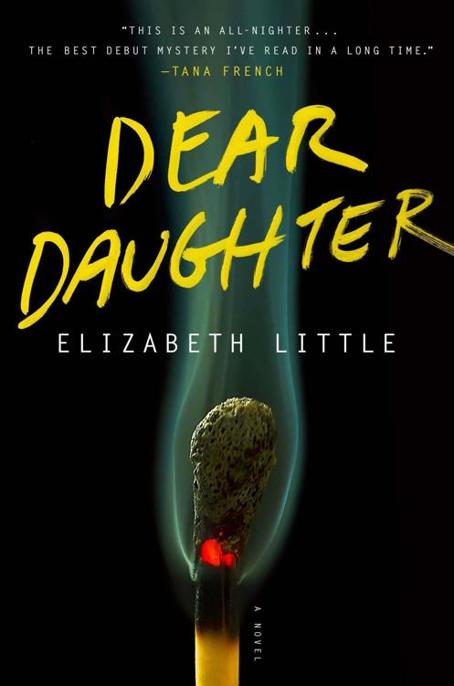 Trip of the Tongue

For Kate and Sara

Some girls are just born with glitter in their veins.

A California judge has overturned the first-degree murder conviction of Jane Jenkins as part of the ongoing investigation into the mismanagement of evidence by the Los Angeles County Crime Lab from 2001 to 2005.

Jenkins, 26, was convicted in 2003 of killing her mother, Swiss American socialite and philanthropist Marion Elsinger.

Jenkins made her first public appearance in ten years when she was escorted into this morning’s proceedings in Sacramento. Reporters were barred from the hearing.

Jenkins is scheduled to be released later today. When her lawyer, Noah Washington, was asked outside the courthouse about Jenkins’s plans for the future, he offered no comment.

As soon as they processed my release, Noah and I hit the ground running. A change of clothes. A wig. An inconspicuous sedan. We doubled back once, twice, then drove south when we were headed east. In San Francisco we had a girl who looked like me board a plane to Hawaii.

Oh, I thought I was so clever.

But you probably already know that I’m not.

I mean, come on, you didn’t really think I was just going to
disappear
, did you? That I would skulk off and live in the shadows? That maybe I would find a distant island, a plastic surgeon, a white ceramic half mask and a Punjab lasso? Get real.

But I never meant for it to come to this. There’s attention and then there’s
attention
, and sure, the latter gets you fame and money and free designer shoes, but I’m not Lindsay Lohan. I understand the concept of declining marginal returns. It was the not knowing—that’s what I couldn’t stand. That’s why I’m here.

Did you know that the more you remember, the more you expand your perception of personal time? No, really. There’s, like, studies and shit. Even though we can’t outrun death, if we muscle up our memories the race, at least, will seem a little longer. That is, we’ll still die, but we’ll have lived more. Kind of comforting, right?

Unless, of course, you’re me.

Imagine how it would feel if, out of the blue, someone were to hand you a gold medal and tell you it was yours.
Oh my god
, you’d think.
I am so super awesome! I won the Olympics. But, wait—what did I win? When did I win it? When did I train? Shouldn’t my biceps be full-on Madonna? How could I possibly forget the defining moment of my life?

And what does it mean that I did?

Now imagine that instead of a gold medal you were given a murder conviction, and you’ll have some sense of how it is for me.

When I think back on the night my mother died, it’s like trying to adjust a pair of rabbit ears to pick up a distant broadcast signal. Every so often something comes into focus, but mostly I just get the scrape-sound of static, an impenetrable wall of snow. Sometimes there isn’t even a picture. Sometimes there isn’t even a TV. Maybe if I’d had a moment to stop and think that morning I might’ve had the chance to imprint a useful detail or two, but the police hustled me out of the house and into a cruiser and over to the station before I could even think to worry about what I was wearing, much less what I might have done. By lunchtime I was in an interview room picking dried blood out from under my fingernails while two detectives explained what they wanted me to write in my confession.

Not that I blame them. I was always going to be the best story.

Next was the trial, which didn’t have anything to do with what I knew but rather with what other people had decided I knew, and soon enough I lost the ability to tell the difference between them. And now I’m stuck with a mess of a memory, a hodgepodge of angry testimony, sanctimonious magazine profiles, made-for-TV movies—less linear narrative than
True Hollywood Story
highlight reel. I don’t know what’s mine anymore.

(That’s right. You probably didn’t know that part, did you?)

It’s hard enough to maintain your innocence when so many people are so sure you’re not. It’s impossible when you’re not sure of anything at all—other than the awful, inescapable fact that you hadn’t particularly liked your own mother.

The uncertainty ate at me, maggots mashing the already-decaying corpse of my brain. And in jail, isolated from any real means of investigation, all I could do was wonder. I began to treat every action of every day like an omen, a crystal ball, a goat’s intestines. How would a killer brush her teeth? How would a killer brush her hair? Would she take sugar in her coffee? Milk in her tea? Would she knot her shoelaces once? Twice?

Totally kidding. Like they would have given me shoelaces.

Of all the challenges of incarceration, this was perhaps the worst: I was a fundamentally rational creature reduced to rudimentary divination. I promised myself that if I ever got out I’d try to find out what really happened, to find out what I really was.

I ignored the voice that said killing again was the only way I’d ever know for sure.

Testing. Is the new phone working? Did you get this?

What the fuck is this

I need to make sure I can reach you.

Welcome to the future.

Can I go back to jail now

Six weeks after I got out, the last Tuesday in October, I was standing in front of a mirror in a hotel in Sacramento. I’d been there for what felt like hours, playing with my hair like a preteen twat while I worked up the courage to cut it off and color it.

In prison my hair was all I had, the last thing that made me
me
. Such a pain in the ass to take care of, too—I mean, for ages the only personal care items I was allowed were these packets of watery shampoo no bigger than the things of ketchup they give you at McDonald’s. Other girls dreamed of sex or drugs or cigarettes; I’d’ve given my left kidney for some motherfucking Pantene. I could’ve saved myself so much trouble if I’d shaved it, cut it, burned it, but I didn’t, even though my vanity was already my most conspicuous vulnerability.

It’s an amateur move, giving a shit. I just couldn’t help myself.

I combed the hair out with my fingers. After all the trouble I’d gone to, it still had the texture of something a cat had coughed up. Matted. Glutinous. It fell to my waist in a glop of coarse strands and split ends. I smeared my sweaty palm over my reflection like I was late Liz Taylor greasing up a camera lens. It didn’t help. I turned away.

Wolf Wood (Part One): The Gathering Storm by Mike Dixon
The Lunam Ceremony (Book One) by Nicole Loufas
Dawn and the Dead by Nicholas John
The Promise of Rainbows by Ava Miles
The Devastatingly Beautiful Series by M Dauphin
Journey to the End of the Night by LOUIS-FERDINAND CÉLINE
Holding Their Own XI: Hearts and Minds by Joe Nobody
Long Shot for Paul by Matt Christopher
Whose Life is it Anyway? by Sinead Moriarty
Heroic Abduction by Eve Langlais
Our partner