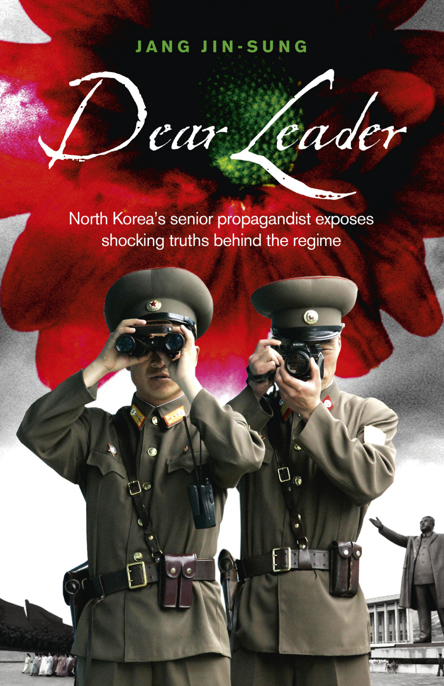 Dear Leader
contains astonishing revelations about North Korea that could only be disclosed by a regime insider.

Jang Jin-sung worked at the heart of North Korea’s propaganda machine. Young and ambitious, he had access to state secrets, including information about military and diplomatic policies, and the distribution of power. He was also one of the Hermit Kingdom’s leading poets, whose work secured him an audience with Kim Jong-il himself. As one of the ‘Admitted’, he had every reason to feel satisfied with his lot.

Yet he could not ignore his conscience, or the contrast between his life and that of those he saw starving on the street. After breaking security rules, he and a friend were forced to flee for their lives.

This is the gripping true story of Jang Jin-sung’s escape to freedom, and a shocking exposé of the world’s most secretive totalitarian state.

Jang Jin-sung is a former court poet, and propagandist, for North Korean leader Kim Jong-il. Since leaving the country he has become a bestselling author and media sensation. He has been awarded the Rex Warner Literary Prize and read his poetry at London’s Cultural Olympiad in 2012. He now lives in South Korea and is Editor-in-Chief of New Focus International, an authoritative website reporting on North Korea (
http://newfocusintl.com
).

I FIRST MET
Mr Jang in June 2012. He had come to London to take part in Poetry Parnassus, hosted by the Southbank Centre as part of the summer Olympic Games. A Korean studying in England, I had been asked to interpret for both North and South Korean representatives. As I waited for him to come through at the arrivals hall at Heathrow Airport, I looked at my phone to check the photograph of him I had found on the Internet: in it, he was dressed in a dark suit, smiling a little and looking up at the camera under the curls of his black hair.

When he walked into the arrivals hall pushing a luggage trolley, his hair was dishevelled and he looked half-submerged in his navy blue suit. His white cuffs poked unevenly from his jacket sleeves and his light pink tie did not sit quite straight. We exchanged greetings in Korean, bowed and shook hands. As we walked to the car I pushed the trolley. He opened the door of the black van for me and held out his hand to steady me as I climbed the steps.

When we set off for the Southbank Centre, he hung a camera around his neck, while I prepared myself to make conversation. I pointed out London’s sights for him as he snapped shots and admired the landmarks. Among those buildings I pointed out was the MI6 headquarters at Vauxhall Cross, and I took my chance to break the ice between us: ‘Apparently, this is where women who want to snag a James Bond type hang out.’ Suddenly, the rather formal atmosphere between us evaporated and he burst into laughter. He said that if those women ever found out that real spies were just
people like him, they might stop waiting and go find themselves a proper man.

By the end of his stay, we had become friends, talking easily instead of in the formal manner of those from neighbouring nations who had become distant strangers after half a century without contact. Even today, North Koreans are not permitted to communicate freely with anyone from the outside world – not by email, not by phone, not in person.

It doesn’t help that media portrayals of North Korea, based on an outsider’s perspective, focus on the inscrutability of its system: the strange dynasty of Kims, the endless heavy boots marching in line or the uneasy prospect of its nuclear arsenal. There is far more to its people than the public shows of mass obedience and hysterical tears – the North Korean experience is a complex and dysfunctional relationship between a system and the people ensnared by it, of which Mr Jang is a unique witness. Not only did he live at its heart, but he escaped from it.

In this book, he ends his account in 2004, and some things have changed in North Korea since then. Informal and illegal marketisation from below, rising from the ashes of North Korea’s economic collapse in the mid 1990s, has continued to impact significantly on the nature of social transactions conducted between individual and state. The purge and execution in December 2013 of Jang Song-thaek, uncle to the current ruler Kim Jong-un, made headlines across the world. The graphic accusations against him were published in a very public manner by being broadcast on state television and released quickly to a foreign audience; and the incident was noted for breaking from the past in many ways.

But these events did not occur in a historical vacuum and, in order to make sense of North Korea’s present, you have to know its past. Particularly, you have to recognise its persistent dualities – between words and deeds, propaganda and reality, and the manner
in which these dualities work for the outsider versus the insider. Without an appreciation of this, North Korea will remain inscrutable and our exchanges cyclical.

Mr Jang was not a politician but a poet, and this is precisely why he is intimately familiar with the regime’s myth-making, and why his memoir is about the dismantling of façades. The outside world’s approach to North Korea is based on many deceptions, for which all sides are responsible, and on which the status quo depends; Mr Jang’s escape from North Korea really began when he realised: ‘I was restless with yearning to write realist poetry based on what I saw, and not loyalist poetry based on what we were all told to see.’

It remains impossible for an outsider to gain access to the state’s internal workings by doing business with or making trips to North Korea. Not only are there strict layers of control and hidden power structures in place, but proxies and agents are deliberately disguised as prominent insiders whenever North Korea deals with foreigners and presents itself to the world. It has also long been thought that no defector can speak with authority on the workings of the system, due to its highly compartmentalised nature. In this respect, Mr Jang is a clear exception.

At first, I was suspicious rather than sceptical. I asked how it was that the outside world still did not know the things he knew, and he replied that it was in order to address this that he had decided to leave the sphere of intelligence just over a year before our meeting. We both recognised the need for his knowledge to reach a wider audience. As he says: ‘If North Korea has lies and nukes, I have the truth and the written word.’

Mr Jang has never overplayed his knowledge or experiences. If anything, he has been too modest, and it was only through writing this book that he realised how many essential insights he had to share. I admit to feeling frustrated by how often he underplayed or was required to underplay his knowledge. I respect his decisions and
understand the circumstances, but that did not stop me from wishing he could reveal more of the truth.

There is much that is not and cannot be said in this book. The passage of time will allow for more light to be thrown; in the meantime, I hope this account can serve as a basis on which to reassess our understanding of North Korea.

The North Korean regime’s doublespeak and opacity are two of its crucial pillars of power. Regardless of whether the world could not see through those façades, or was reluctant to do so, Mr Jang’s memoir reveals that understanding North Korea’s past and its persistent dualities is the key both to clarifying its present and to unlocking changes to come.

A LITTLE AFTER
midnight, just as I’m settling into bed, the phone begins to ring. I decide not to answer before the fifth ring, and hope it will stop before then. When it rings a sixth time, I imagine my parents waking up, annoyed, and I pick up. I am ready to give whoever is on the other end a good telling-off.

‘Hello?’ In the silent house my voice sounds more intrusive than the ringing phone.

‘This is the First Party Secretary.’

At these words, I involuntarily jerk upright and jar my skull against the headboard.

‘I am issuing an Extraordinary Summons. Report to work by 1 a.m. Wear a suit. You are not to notify anyone else.’

Although in this country we are accustomed to obeying even the strangest command as a matter of course, it’s disconcerting that the First Party Secretary himself has just given me an order. He is the Central Party liaison for our department. Under normal circumstances, I would expect to receive orders from the Party Secretary of Division 19 or Section 5, in keeping with my position in the Party’s organisational hierarchy. On top of that, he has used the term ‘Extraordinary Summons’.

This usually refers to the mobilisation of troops. When the United States and South Korea perform joint military exercises on the Korean peninsula, our nation responds by conducting nationwide mobilisation drills. The call to take part in these is referred to as
an ‘Extraordinary Summons’. But we are usually notified through deliberate leaks in advance of such a call. Individual Workers’ Party units and sections, under fierce pressure to outperform their rivals, are always seeking to gain an edge: employees of those well connected enough to be in the know remain at work on the specified day, reporting for duty ahead of those who have unwittingly gone home for the evening.

However, if this were a standard military mobilisation summons, I would not have been asked to wear a suit. We cadres who belong to the Central Party, unlike ordinary North Koreans attached to regional or departmental Party branches, know that an ‘Extraordinary Summons’ can also lead to an encounter with Kim Jong-il, our Dear Leader.

When someone is summoned to meet him, there is no advance notification. Not even the highest-ranking generals are made aware of the operational details of these meetings. An invitation to meet Kim is relayed through a First Party Secretary, who is summoned to a Party Committee room that has been placed under lockdown by Dear Leader’s personal bodyguards. Under their close surveillance, the First Party Secretary receives a list of names and issues the individual summons for each cadre, with the logistics of the encounter carried out in strict secrecy. In this situation, the term ‘Extraordinary Summons’ is the code phrase that sets this clandestine process in motion.

Sussex Summer by Lucy Muir
Bound by Duty (Bound Series Book 1) by Smith, Stormy
Mr Toppit by Charles Elton
Passion in the Sky by Diane Thorne
Munson: The Life and Death of a Yankee Captain by Marty Appel
A Lesson in Passion by Jennifer Connors
The Gathering by S L Dearing
Terms of Endearment by Larry McMurtry
Deadfall by Dixon, Franklin W
Compulsion by JB Brooks
Our partner