Read Death and the Dervish (Writings From An Unbound Europe) Online

Death and the Dervish (Writings From An Unbound Europe) 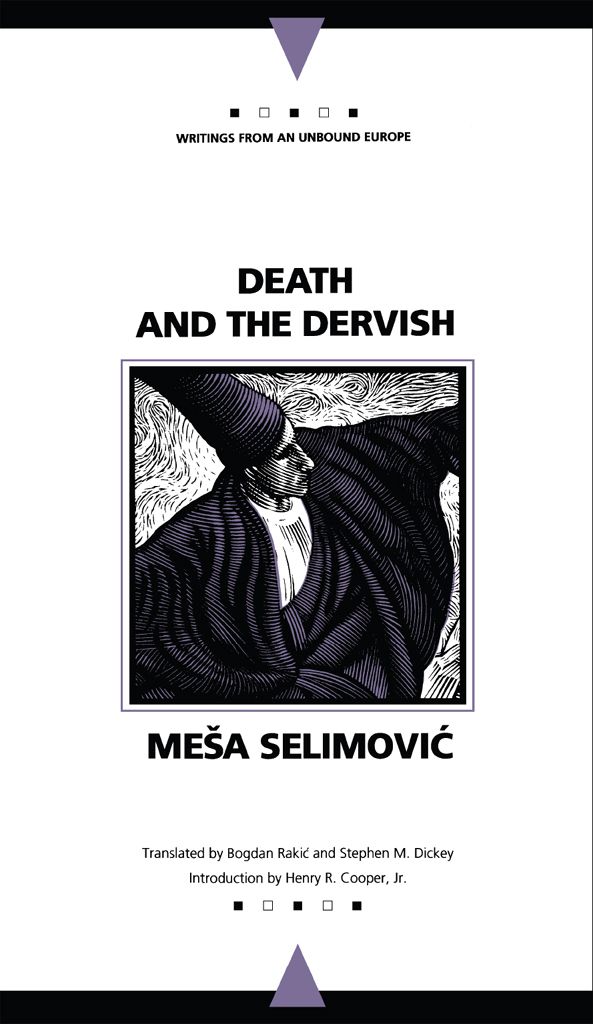 DEATH AND THE DERVISH

Writings from an Unbound Europe

DEATH AND THE DERVISH

The paper used in this publication meets the minimum requirements of the American National Standard for Information Sciences—Permanence of Paper for Printed Library Materials, ANSI Z39.48-1992.

Faintheartedness, or, more emphatically, moral cowardice, or, stronger still, pusillanimity—all rendered in Selimović’s language by one word,
malodušnost
—epitomize Ahmed Nuruddin, the first-person narrator of
Death and the Dervish.
On one level at least, the novel is a case study of narrowness of spirit, emotional cowardice, and moral indecisiveness. One would be hard-pressed to find a better treatment of this particularly twentieth-century malady in any other modern literature. Meša Selimović, one of Bosnia’s very best novelists, in his finest work, offers his readers an extraordinarily intricate examination of the anxious and incapacitated human heart, splayed against a backdrop of unsettling vagueness and mystery.

Death and the Dervish
is set in Bosnia sometime during Ottoman rule, which lasted from the latter part of the fifteenth century to the latter part of the nineteenth. No specific date is ever mentioned (although the rebellions in the Krajina and Posavina suggest the seventeenth century), so that the reader is left with the feeling of timelessness, as if it had always been thus and would always continue to be. Islam is the established religion and no other faith is considered, let alone depicted, although ample reference is made to “Saint George’s Day,” an obviously Christian holiday that is treated in the novel as a moment of pagan relapse, an atavistic hearkening to a time before the “light of faith” (the meaning of Ahmed Nuruddin’s name) arrived to impose its benevolent rule. Even the town itself, wherein virtually all the action of
the novel occurs, remains obstinately anonymous (although, once again, the suggestion is Sarajevo; compare the references to the Sinan Tekke and Mount Igman). It is neither Tuzla (Selimović’s birthplace) nor Travnik (Ottoman Bosnia’s capital), for characters in the novel can be sent there. It is simply the
kasaba
, a generic term for any town with its market and institutions and homes. This
kasaba
, however, is more important than most, for it has its own fortress, in reality less a defensive construction than an enormously oppressive jail, the menacing presence of which plays an important role in the story. Indeed Selimović even called
Death and the Dervish
’
s
sequel
The Fortress
, to underscore the centrality that jails (and freedom) play in his Bosnian world.

Equally vague is the timing of the novel, despite the narrator’s assertion early on that “it all began to occur two months and three days ago,” on the eve of Saint George’s Day (23 April, new style 6 May). As the novel progresses no further precision is offered regarding time, although the change of seasons, eventually moving from spring to summer to fall with forebodings of a severe winter to come, is mentioned. Lapses occur in the manuscript, which is what the novel claims in fact to be: Ahmed Nuruddin avers he has left off writing for a while, as other matters preoccupy him. Nonetheless the narrative flow is seamless, both beginning and ending with the same (mis)quote from the Koran; somehow, quite mysteriously, both beginning and end are on the eve of Ahmed Nuruddin’s execution.

The characters are vague as well, more often than not they are called not by their names (if indeed they have any) but by their titles. So Ahmed Nuruddin himself, who makes so much of the meaning of his name, admits it was assigned to him; it is not really his own. In any event he is usually called the “sheikh,” or head of a religious community. There is the kadi, or judge, and the kadi’s wife; the musellim or sheriff; various tradespeople; guards; the miralay and his retinue; the mullah, the mufti, the defterdar, and so on (a Glossary has
been provided at the back of this book.) Only two names figure at all prominently in the novel: Is-haq the fugitive, but then that is the name Ahmed Nuruddin capriciously gives him, without knowing his real name; and Hassan, the friend, active force, and moral and emotional counterweight to Ahmed Nuruddin. Only Hassan’s then is a real name, only Hassan is unburdened by a title. All the rest are as vague and as shaky as their inauthentic names and insecure positions suggest.

Even the faith of Islam itself wavers in
Death and the Dervish
, though dervishes represent the most powerful, most severe, most pure witness among the various Islamic holy orders. The tekke, the order’s home, is no safe haven. Its inhabitants are sick or scoundrelly or morally so indefinite that the regular performance of their religious rites imparts no piety to them, only an air of hypocrisy or at best meaninglessness. The administration of the town, and indeed even of the empire, is corrupt and unprincipled despite the omnipresence of Islamic structures and laws. And the sacred text of Islam itself, the Koran, a verse of which precedes each chapter, is unreferenced and often distorted. Thus, the surest guide itself can be used to contribute to the novel’s unremitting air of spiritual ambiguity, confusion, and compromise. In other words, every feature of
Death and the Dervish
, its timing, setting, characterizations, and allusions, underscores Ahmed Nuruddin’s own faintness of heart and soul.

The plot of the novel is based on an event in Selimović’s own life. The confessional tone of the novel, from its first-person narration to its mention of Selimović’s own executed brother, Šefkija, by name and in tandem with Ahmed Nuruddin’s executed brother, Harun, is straightforwardly autobiographical. Meša (originally Mehmed) Selimović was born in Tuzla, northwestern Bosnia, in 1910, to a fairly well-to-do family. Though Selimović’s mother was religiously observant, it seems the rest of the family was not. Selimović himself claimed to be a Communist and an atheist, and his brothers
and sisters were active in the Yugoslav Communist Party before World War II and in the Communist-led partisan resistance movement during the war. In fact it was at the very end of the war in the Balkans that the episode occurred that would lead to the writing of
Death and the Dervish.
Šefkija Selimović, Meša’s older brother, a Communist and partisan, was put in charge of a warehouse of property stolen by the Nazi and Ustaša occupiers of Tuzla. Needing some furniture to outfit an apartment for himself and his new wife after their home had been destroyed, Šefkija removed a few inconsequential pieces from the warehouse. Perhaps egged on by enemies he had made in the local party administration, or merely in a perverse streak of puritanism, the Communist authorities accused Šefkija of impropriety with the people’s property and in very short order executed him as an example to others. Meša and his other brother, Teufik, also a Communist, were unable to prevent the tragedy; many felt that they had not tried hard enough to do so.

After the war, despite his activities as a Communist and partisan, Selimović was expelled from the Communist Party for abandoning his wife and newborn daughter for another woman, who was in fact a “bourgeoise” (this was Darka Božić, daughter of the former royal Yugoslav commandant of Sarajevo; it is to her that
Death and the Dervish
is dedicated). Though he was eventually reconciled with and readmitted to the party, and he found a very stable and important partner in Darka, the decade of the 1950s was difficult for Selimović: essentially he made his living at odd writing and scripting jobs, and the little fiction that he published was not received with critical acclaim. It was only in the 1960s that stability—a job as editor of a major Sarajevo publishing house—and success in writing, first modestly with
Tišine
(Silences), and then spectacularly with
Death and the Dervish
(1966), finally caught up with him. By the end of the decade Selimović had been awarded all the most prestigious Yugoslav literary prizes and even been nominated for the Nobel Prize
in Literature. He did not win: the only Yugoslav ever to have done so, in 1961, was Ivo Andrić, Selimović’s fellow Bosnian, with whom he is often compared and even more often contrasted. Failing health in the 1970s and the cooler reception for his later work,
Tvrdjava
(The fortress) and
Ostrvo
(The island), made the last decade of Selimović’s life somewhat mournful. A move to Belgrade at that time, both to escape Bosnian provincialism and to enter Yugoslav and especially Serbian literary “high society,” provided him no significant relief from the aftereffects of fading glory, although he continued officially to be honored by both state and public.

In his autobiography,
Sjećanja
(Memoirs), and his other public pronouncements toward the end of his life Selimović developed with increasing insistence the idea that he was a Serb by nationality, a Bosnian merely by birth. Such self-identification was no idle semantic game in Yugoslavia, as has become painfully clear in the aftermath of that country’s breakup. Notwithstanding the claims of the nationalists, the difference among Serbs, Croats, and Slavic Muslims is neither linguistic, nor ethnic, nor, as religious practice fades, confessional. The essential difference derives from a sense of community: Which set of national myths will an individual choose to celebrate as his or her own? Which group of people will he or she celebrate them with? Despite contemporary appearances, movement among these groups has been appreciable over time, and the boundaries until recently have remained porous. How else could Ivo Andrić, born of Croatian parents, baptized a Roman Catholic, raised and educated in Bosnia, be hailed at his death as Serbia’s greatest writer? How else could Selimović, so closely identified with the Bosnian Muslim milieu, expect acceptance as a Serb? Many have speculated on the motivations underlying both Andrić’s and Selimovic’s adoption of Serbian cultural citizenship, and the unkindest have often posited mean self-interest. In both cases, however, it seems clear that the writers saw Serbdom’s tent to be larger, more inclusive, more varied and inviting
than the far smaller tents into which they had been born. In the context of the Slavic-speaking Balkans, the Serbs had the most cosmopolitan culture; the rest were more provincial and (consider the Croatian laureate Miroslav Krleža) even stifling. One way or another, Selimović insisted on his Serbian identity at a time when it was not particularly fashionable (or even politically astute) to do so. Whatever his motive, it seemed particularly important to him to join the ranks of Serbian writers, and to understand his Bosnian Muslim ways as a subset of the larger Serbian cultural heritage.

The Mystery of the Third Lucretia by Susan Runholt
Stronger with You (With You Trilogy) by R. J. Sable
The King by Rick Soper
Come Back to Me by Sara Foster
Stone Cold by Joel Goldman
MakeMeShiver by Hunter, Aline
Bachelor Unclaimed by Brenda Jackson
Zagreb Cowboy by Alen Mattich
Getting Hotter by Elle Kennedy
Your Big Break by Johanna Edwards
Our partner