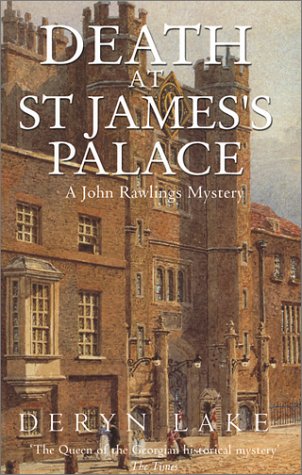 The right of Deryn Lake to be identified as
author of this work has been asserted by her in
accordance with the Copyright, Designs and
Patents Act, 1988

This book is sold subject to the condition that it shall not,
by way of trade or otherwise, be lent, resold, hired out or
otherwise circulated without the publisher's prior
written consent in any form of binding or cover other than
that in which it is published and without a similar condition
including this condition being imposed upon the subsequent
purchaser.

Printed and bound in Ebbw Vale,
by Creative Print & Design

For Nick and Jane Ray - to celebrate ten years of friendship.
It all started on the Nile!

First and foremost I would like to thank all the staff at St. James's Palace for their charm, courtesy and general informal good humour when they showed me and my editor round on our own personal conducted tour. Particularly I would like to single out Alun Spencer who entered into the spirit of the occasion and even offered to stand where the victim did in order that I might push him. He was a total delight and I shall never forget what a great day he gave us, to say nothing of the ghost stories and mugs of tea that were thrown in. Next on the list comes my editor himself, David Shelley, the wunderkind, whose perception and ability are only matched by his glorious sense of humour. Without my agent, Vanessa Holt, I would never have found David and had such fun, so an enormous thank you to her as well. Also on the list are Geoffrey Bailey of Crime In Store Bookshop, the most discreet puller of strings around, and Rolf Strieker of Back-in- Print Books, who made sure that John Rawlings never disappeared. I must also mention Tony Fennymore, who gave me a truly unforgettable holiday in Crete. I learned so much from him - in every way. Finally, a huge thank you to all the people who keep me laughing when the going gets tough: Anoushka Ainsley, Fiona Brown, Mark Newington Butts, Charles Purle and the ever-cheerful editor of SHOTS magazine, Mike Stotter. Last but very far from least, I thank my companion in many adventures, past and future, John Elnaugh.

T
hey were, considered John Rawlings, standing on tiptoe to get a better look, one of the finest rows of cabbages he had ever seen. Large and proud, green as gems and glistening still with the dew of an autumn morning, the vegetables by their very splendour seemed to boast of their royal connections as they spread their lustrous fronds towards the early sun. Stalks and leaves and juicy hearts, all begging to be crunched, could well have borne the royal coat of arms, John thought, as he briefly considered vaulting over the wall and plucking one from the rich earth of the King’s Kitchen Garden, and hiding it beneath the skirts of his walking coat. In fact one particular cabbage that had immediately caught his eye and held most temptation for him, was so royal that it closely resembled the small and ugly new Queen of England, Charlotte herself.

Good sense and sobriety held sway and the Apothecary lowered himself to ground level and continued his walk along Church Lane, Kensington, the track running between the High Street and the road to the gravel pits. At the end of the lane, standing in its own field and garden, was the Parsonage House, occupied by the Reverend Waller, who was presently out of doors, breathing in the crisp September air. A typical country parson in every way, round of feature and rubicund of cheek, he exuded goodwill and benevolence.

“Good morning, Mr. Rawlings,” he called out cheerily, doffing his hat towards heaven.

“Good morning,” John replied, suddenly full of guilt at his earlier temptation and so glad that he had resisted the forbidden fruit or, in this case, vegetable.

“His Majesty is in residence at the Palace.”

“When did he arrive?”

“Last night, quite late. It is a surprise visit.”

“I thought he had no great love for Kensington since his marriage.”

“I believe it is Her Majesty who has taken against the place,” answered the parson, and looked wicked and saintly simultaneously, an attribute that John very much admired.

“I am not altogether surprised at that,” the Apothecary answered meaningfully, then with a further exchange of greeting went on his way, turning in at the door of the house on the end of the row, the home in which his father Sir Gabriel Kent now lived permanently.

A great deal had happened in the three years that had pased since the winter of 1758, when that beau of fashion, now seventy-seven years old but for all that as spry and arresting as ever - and still famous for his dazzling rig-outs of black and white - had moved to Kensington, the country village much favoured by the
beau monde
as a rural retreat. Nationally, there had been a change of monarch. On the 25th October, 1760, the old King, George II, had died in the water closet, after checking to see if all his money was in his purse, according to the waspish Horace Walpole. He had been succeeded by his grandson, twenty-two years old and a bachelor. And though there had been a short-lived hope that there might at long last be an English Queen - for the young King’s passionate attachment to Lady Sarah Lennox of Holland House, Kensington, had been glaringly obvious to all - these had been dashed when the new monarch, under orders from his adviser Lord Bute, had earlier this very month of September, married yet another German princess, this one uglier than most and dim into the bargain.

On the domestic front, John had also taken a bride, though two years earlier than the King, having eventually tired of his mistress, the wayward Coralie Clive, now the toast of London, having achieved even greater fame as an actress than her sister, Kitty. The charming Emilia Alleyn had been his choice, and the couple had set up house together in John’s London home, number two, Nassau Street, Soho, in 1759. It had all been very delightful and it had also all been very dull, for no adventures had come the Apothecary’s way since his honeymoon, when he had found himself involved in the hunt for a particularly vicious murderer. But for the last two years he had led a totally uneventful life and was presently finding it irksome in the extreme.

“Ha,” said Sir Gabriel, looking up from the breakfast table as John came into the morning room, “how was your walk, my boy?”

“Very pleasant. I nearly stole a cabbage but my better nature prevailed.”

“No, she’s resting. She got up but seemed rather listless and has retired once more. Pray sit down and eat.”

“With pleasure. Is there anything of interest in the paper?”

“There most certainly is. It has happened at last, and not a second before time I might add.”

Sir Gabriel’s golden eyes flashed over the newsprint. “A certain someone is to be given an honour.”

John tucked into a slice of ham. “Father, you are being annoyingly coy. What is it you are trying to tell me?”

“Mr. Fielding is to receive a knighthood.”

The Apothecary’s fork clattered to his plate. “Really? How wonderful. If anyone ever deserved to be knighted, it is he.”

“Does it say when this is to happen?”

“Sometime soon; it does not specify the actual date.”

“I’ve a mind to call to congratulate him,” said John, momentarily losing his appetite in his enthusiasm.

“Is he in Kensington this weekend?”

“I don’t know but not a great deal will be lost in finding out.”

“I think,” said Sir Gabriel, wiping his mouth on a fine white linen napkin, “that I will accompany you. This occasion really is deserving of a celebration. I believe we should issue an invitation to dine.”

“An excellent idea. When?”

“Tomorrow perhaps, before he returns to town.”

“I was planning to go back myself before nightfall but if Mr. Fielding accepts - how strange it will be to call him Sir John - I shall delay my return till Monday morning.”

“Will you leave Emilia behind?”

The Apothecary lowered his fork once more. “No. Why should I?”

“Because, my dear, I do not think she is in the best of health and might well benefit from the fresh country air. London’s too full of stinks for anyone poorly.”

“But Emilia isn’t poorly,” his adopted son argued. “She may be small but she is perfectly robust, I assure you.”

“Ah,” said Sir Gabriel, and returned to his reading.

“I shall visit her professionally immediately after breakfast,” John announced to the newspaper.”

“Good,” replied his father from within its depths, and refused to be drawn further.

She
was
very pale; John had to admit it. In fact she looked almost as white as the pillowcase on which she was resting her head. The Apothecary halted in the doorway, cursing himself for being so unobservant, thinking that it was always the wives of physicians and herbalists who were the least well attended.

She opened her eyes and looked at him in a flash of blue. “I’m sorry, I felt fit for nothing when I got up and now I’ve just been sick. The maid has taken the pail away so I hope the smell has gone.”

He crossed to the bed and felt her pulse. “That seems regular. Has anyone ever told you that you are absolutely beautiful, even when you’re ill?”

John sat down and Emilia moved over to make room for him, her body a little slow, he noticed. “Tell me, what are your symptoms?”

“Are you being my husband or an apothecary?”

“Both. Describe to me what you feel.”

“Nauseated. My appetite has gone.”

“That’s because you’re too busy attacking your own victuals.”

“Don’t be rude. Anything else?”

“No, not really, other than a general lassitude.”

John stroked his chin. “And your courses? How are they?”

Emilia looked aggrieved. “Need you be quite so frank?”

“Yes, I need. I am speaking to you in a purely professional manner.”

“Well, then, the last I had was somewhat weak.”

“I see.” The Apothecary sat in silence, then very suddenly stood upright, an extremely bright grin on his face. “Let me look at your abdomen.”

“You see it every time I undress.”

“But I want to examine it specially. Come on, Emilia, don’t be shy at this stage.”

Reluctantly, his wife wriggled outside the covers.

“Would you be so good as to raise your shift.”