DEATH COMES TO AN OPEN HOUSE 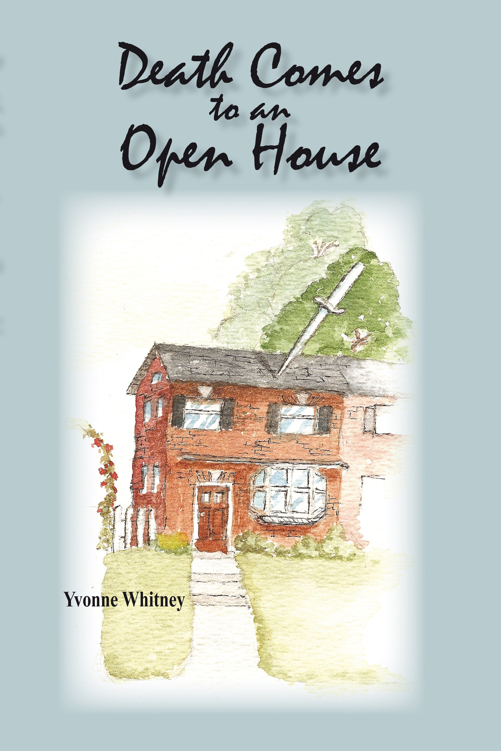 Also by this author: The Haunting of Matty Buhrmann

DEATH COMES
TO AN OPEN HOUSE

Death Comes to an Open House

iUniverse books may be ordered through booksellers or by contacting:

Because of the dynamic nature of the Internet, any Web addresses or links contained in this book may have changed since publication and may no longer be valid. The views expressed in this work are solely those of the author and do not necessarily reflect the views of the publisher, and the publisher hereby disclaims any responsibility for them.

Any people depicted in stock imagery provided by Thinkstock are models, and such images are being used for illustrative purposes only.

The author’s thanks and gratitude to

My husband Jim for his ongoing encouragement and love

and the cover design,

My daughter Diane for her reliable editing,

My family and friends for the praise for my last book

without which this one would not have been written.

A steady July rain dropped a grey curtain outside the sliding doors, bounced off the cement of the concrete balcony and ran down the lower part of the glass in narrow, parallel streams. On the inside of the efficiency apartment, Jean Terrence moaned and dropped back against the pillows on her narrow bed. Elsewhere in the Washington, D.C. area, gardeners might be delighted, but the rain provided little help to Jean, who nurtured only two potted plants and a struggling fig tree. As the duty agent this morning, she had to be at the reception desk early. It was Tuesday, the day real estate offices held their weekly meetings, usually upbeat social high spots of her week. But today there was a lingering emotional malaise from
The Washington Post
’s story of June Barnes’ stabbing Sunday and other grim open house tales provided by her fellow agents at the office yesterday. It never before had occurred to Jean that multiple dangers threatened a girl of nineteen alone in houses that on Sunday afternoons welcomed all comers, that those arrows she optimistically pounded into the ground pointed to her as a target for killers and rapists.

The timing couldn’t have been worse. After numerous open houses held at properties listed by her mentor, Theresa Vanderhoff, Jean hoped tonight to snag her own listing for the first time and hold it open Sunday. It didn’t seem fair that fear now polluted that hope. The morning rain seemed symbolic, bashing the petals of her red geraniums.

It took three tries to get the old grey Toyota going and head it into the metallic army of vehicles that infested all roads around D.C. any time of any day. Some commuters who wanted a house rather than living quarters like Jean’s two hundred square feet in Gaithersburg drove an hour or more from as far away as Gettysburg, Pennsylvania or Leesburg, Virginia. On a clear day, it was usually less than half an hour to the office in Bethesda, the community whose expensive feet were planted on either side of the line between Maryland and northwest D.C. Finally the little car groaned into the parking lot behind a small stucco house on Kirkland Drive.

Jean stuck the umbrella out first, banging it on the door as she always did. The driveway slanted down, so, to save her shoes from the running stream, she stepped out on her high heels only, lurched up the long driveway to the door labeled
Brumm Realtors
in that ornate font Germans are partial to, hung the opened umbrella with its two bent spokes on her head and, juggling her keys, her briefcase and her purse, managed to elbow the door open.

The office smelled of burned coffee, Hua Chan’s oranges, dampness and old house. The décor was severely out of date, avocado and orange, the carpet worn and the veneer on the furniture beginning to peel at the corners. The walls wore a history of restless children and furniture frequently adjusted to fit the space. This reception area was once a living room. In the back of the house, the agents’ desks nuzzled each other in the former dining room and the tiny kitchen, largely dismantled, was now Ed Brumm’s office. Upstairs, the master bedroom served as a conference room, the bathroom still held a stained tub, shower curtain carefully drawn, and the smaller two bedrooms housed a hodgepodge of “for sale” and “open” signs, dented metal filing cabinets and handicapped office chairs.

Setting her umbrella in the corner stand, Jean carried the rest of her burden to the sales room. She stared for a moment at the plaques behind Theresa Vanderhoff’s desk, realizing that, at least for the moment, admiration had deteriorated to resentment.

Standard chores followed: snag
The
Post
in its wet plastic bag, answering machine off, everything else on: computer, all the lights—to look welcoming—and the two coffee pots, one with only water for tea, a concession to Hua.

The messages were for the others, never for her. As the pink squares were put on the various desks, the phone rang.

“Thank goodness!” Jean said aloud, unaware until that moment how uncomfortable it had been alone in the office since yesterday’s revelations.

It was her broker, Ed Brumm.

“Nice to be needed, Jeannie.”

The fine, rich baritone was a great voice for a Realtor. Jean had been trying, under Theresa’s tutelage, to restrain her exuberant soprano flights and become a dignified, more mature alto, especially when on floor duty.

“I’ve talked to Theresa,” he continued. “Don’t want to leave this conference. She’ll hold the office meeting this morning, as planned. Have to decide about our opens this weekend. Did you know June? Good agent. Don’t think her murder affects us, but I’ll leave that up to each of you. Ads aren’t in yet.”

“No, I didn’t know her. I know she was Theresa’s friend.”

There it was again. That edge in his voice that let Jean know Ed and Theresa weren’t really friends, either.

The computer offered nothing new from the Board.

WARNING! AT AN OPEN HOUSE SUN JULY 11, AGENT JUNE BARNES WAS MURDERED. ANYONE ATTENDING THIS OPEN SHOULD CONTACT THE POLICE. DO NOT PHONE YOUR BOARD. INFORMATION WILL BE SENT AS IT BECOMES AVAILABLE.

It was the same message as yesterday, now posted on the old bulletin board that was more holes than board. No more satisfactory than the newspaper story. No answer to the biggest question they had discussed yesterday: were they in any danger or was this a personal thing with June Barnes?

Jean punched Kevin Brynowski’s numbers into the phone. He hadn’t been at the office yesterday and was careless about attendance at sales meetings.

He sounded more than half asleep.

“Kevin! You shouldn’t answer the phone like that! What if I was a customer? You’re a business person!” Jean knew there was considerable doubt as to the accuracy of that last statement. “It’s important to come to sales meeting this morning, Kevin.”

Silence. Then another “Yuh?”

“Because of the murder.”

There was no intelligence in his voice. He didn’t know.

“An agent was murdered at an open house Sunday.”

Jean was immediately sorry she had echoed Kevin. She wasn’t being businesslike, either.

“See you. At nine thirty,” she prompted. “That’s in about forty minutes.”

There was a murmur. Jean decided the conversation was over and hung up, realizing she should be more sympathetic to Kevin. He didn’t belong here any more than she did, but in this bad employment market, this was the only available job. Pass the licensing test and some office would take you. No salary or benefits; commission only. Everyone had friends or relatives that would bring business some time.

College had been erased from her future the day she found her father in his black pinstripe, dead of a heart attack, on their white bathroom floor. The image still haunted her and the time that followed had been a nightmare. Her mother had been worse than useless, mourning the loss of her income; Jean’s friends were away at college, sending awkward little emails; Grandmother was in no shape to travel and her father’s few friends, all male, were uncomfortable when they spoke to her, which was always briefly. Jean shut her eyes tightly against the familiar stinging. Not a time for tears. The others would arrive any time. They were her friends, her family, now.

The first to walk through the door was her best friend, Rita Hanson, another of Jean’s idols and a counter to Theresa. Rita, by her own account, was “poor white trash” from Georgia. Perhaps because of a miserable start, she shrugged her shoulders at life’s problems, dismissing them. Jean wanted to be like that. She wanted to be as pretty as the statuesque redhead, too, and look as enticing in the inappropriate, tight dresses Rita wore in defiance of the office dress code, but that was clearly asking too much. Close behind her was Marian Arendtz, looking as always as though she had just floated from the pages of a fashion magazine.

“Honestly! That door is just—all I have to carry! And the rain!”

Marian always needed additional gear for days littered with Girl Scout activities, meetings, luncheons, cosmetic and therapeutic treatments and the occasional bit of real estate business. Jean admired this wealthy woman’s determination to achieve something by herself and the way she quickly recovered from being angry or frustrated. When Jean dropped into depression, she lived there for a while.

“Yes. I’m going to tell Dad! Merrill Lynch! Why should I—I am his daughter—why should I—It’s unfair competition! His broker?”

Marian always spoke in sentence fragments that flew like puzzle pieces around the ears of her audience.

“His broker is Merrill Lynch and you lost the listing to one of their real estate offices,” Jean said. Jean liked puzzles.

“Yes! Yes! If everyone did that, maybe these conglomerates—abandon them, I mean—wouldn’t do that!”