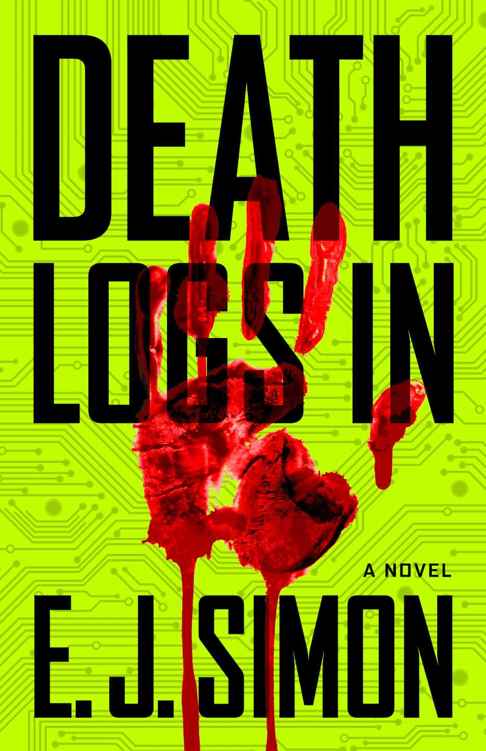 For more information about this book and its author, visit
www.EJSimon.com

Library of Congress Cataloging-in-Publication Data has been applied for.

This edition was prepared by The Editorial Department

For Danielle, who every day shows me the special love that only a daughter can bring to her father.

A
lone inside his wine cellar, Michael Nicholas pecked away at his computer keyboard, clicking the gold Byzantine Orthodox cross icon and then typing in the password his brother had set up … just before he “died.”

It was a year ago, but, for Michael, it seemed like an eternity. And for Alex Nicholas, it was.

Alex had been gunned down while enjoying a plate of sizzling veal parmigiana in a Queens restaurant. The shooter had been hired by Joseph Sharkey, an aging former Mafia hit man and certifiable psychopath.

Alex had been a bookie, a very successful one. He had owned one of the largest sports bookmaking and loan sharking operations in New York City.

Thinking back upon the wake when Donna, his brother’s widow, asked him to briefly help settle Alex’s affairs, Michael never could have dreamed that Alex’s shadowy world would have drawn him in. But none of that compared to what he was about to do tonight—just as he had been doing all along—since his brother’s death.

No matter how often Michael typed in the password, he always expected the screen to turn blank. And the moment Alex appeared on the screen, as he always did, Michael made a mental leap into an abyss, stretching any remaining sense of reason and rationality that he still retained.

Alex’s image appeared, his powerful presence concealing his fifty-five years, just as it had in life—and, now, the fact that he was dead; his facial expressions, body movements and mannerisms were just as real as his gruff, deep voice which gave Michael the warning.

“You don’t have much time,” Alex said. “They’ve sent someone over from Rome just to kill you. I don’t know too many details yet except that his first name is Frank.”

Michael could feel his stomach tighten; he was falling, dropping quickly, and there was no net to break the fall.

M
ichael recognized the voice. It was a call he’d hoped would never come.

“Michael, congratulations on your promotion.”

He placed his hand over the receiver and called out to his secretary, “Karen, please close my door.”

“You know, I don’t know many CEOs or, what are you now, chairman? … Michael?… Are you there? It’s Johnny, Johnny Feathers.”

Johnny had been one of his late brother’s closest friends, a Queens bartender with a notoriously unsteady hand. Tall, fit and recognizable from a distance by his full mane of perfectly groomed white hair, he exuded a calm exterior except for that most recognizable characteristic: his trembling hands.

“Johnny, of course, I’m sorry. We haven’t spoken since—”

“Yeah, since that time just before you took off for L.A. What, last July?” Michael remembered his annoying habit of interrupting people in mid-sentence.

Michael felt sick. He looked out through the glass wall separating his large private office from the reception area and the desk of his trusted assistant, Karen DiNardo. For a moment, as he listened, he wondered whether she had any inkling of his double life, until Johnny Feathers’ voice brought Michael back to the one he was hiding.

“Yeah, I don’t think you forget things like that. I wanted to check in case you needed me to handle anything else for you.”

“Jesus, there you go again, Michael. You know I loved your brother and I would have done anything for him. God rest his soul. Occasionally, he’d ask me to do some small favors. I’d always tell him, ‘Alex, I can do a lot more for you.’ But, he never liked to ask. You know what I’m saying?”

As Michael listened, his mind flashed back to scenes from years ago, Alex and Johnny hanging out together in Queens.

“Michael, you know what I’m saying?”

“What
exactly
are you saying?”

“Just that I know he’d want me to take good care of his little brother.”

“Yes, I understand that part. It’s the part about what
else
I might want that I don’t understand.”

“So, I’m hoping you’re kidding here. You know, people are funny. I’m sure you’re under a lot of fucking pressure, I guess they call it stress these days.”

“OK, you do remember your old friend, Apple Blossom?”

“You mean my old boss, Dick Applegarden?” Michael’s anxiety level skyrocketed as he thought back to his dead boss. “Of course I remember but—”

“Hey, I’m sure you do. You got his job after we finished with him, right? My people did a good job, don’t you think? I mean, weren’t you fucking happy?”

“But don’t tell me you believed that sleep apnea shit, Michael? I had my best team take care of this for you. And here I’m thinking you knew what the hell went on and you’re probably gonna call and thank me, you know what I’m saying? I thought I’d have heard from you a while ago, to be honest.”

“No, no—” Now Michael was hoping Johnny would interrupt because he wasn’t sure what to say.

Although “Chairman Dick” Applegarden had hired him, Michael despised him and everything he stood for. For taking the company into the subprime mortgage business and gloating over the profits while everyone knew it wasn’t a good business. For directing the egotistical but disastrous acquisition of numerous companies, resulting in the loss of millions of dollars and hundreds of jobs—and then hiring Michael to just “fix” it all—and attacking him when he couldn’t do it quickly enough.

But he would never think of having him murdered.

“You told me that son of a bitch was getting ready to fire you, remember?”

“You said you hated the guy. You said, ‘I wish you could fix this for me’ and I told you, ‘Don’t worry, Michael, consider it done.’”

“But, we were drinking—and joking around.”

“Michael, you know that saying, ‘there’s no such thing as a joke. It was either Freud or Woody Allen. One of them said it.”

Michael remembered the conversation perfectly. Of course, that alone told him something. It was over drinks—too many drinks—at the Black Rose bar in Queens Village late one night just before Michael was to go to L.A. to deliver the speech on top-level management greed that he was sure would give Applegarden the excuse he needed to fire him.

Michael also recalled feeling a nagging doubt that seemed to build in his mind on his drive home that night. He wondered whether he had gone too far. At that point, however, he had no idea that his brother’s good friend engaged in arranging professional hits. He’d thought about calling John and making sure there had been no misunderstanding. But he never did.

“Listen, Michael, murder, like every other vice, you don’t need no motive, just opportunity. You know what I’m saying?” The word
murder
seared through Michael’s insides. “It’s just that most people don’t have the opportunity.”

And now that he had entered the business of his murdered brother, Michael had easy access to people who could “fix” anything. It was also, however, a culture of subtleties, where things unspoken were somehow clear, a world to which he was unaccustomed and a language still foreign.

Michael knew now that he had made an inconceivable mistake.

Applegarden’s sudden death in his suite at the Peninsula Beverly Hills after a night at the bar had been attributed by the coroner to sleep apnea complicated by scotch and Ambien. But Michael always had a dark, uncomfortable suspicion that it was otherwise.