Death Of A Sad Face (A Serafina Florio Mystery) 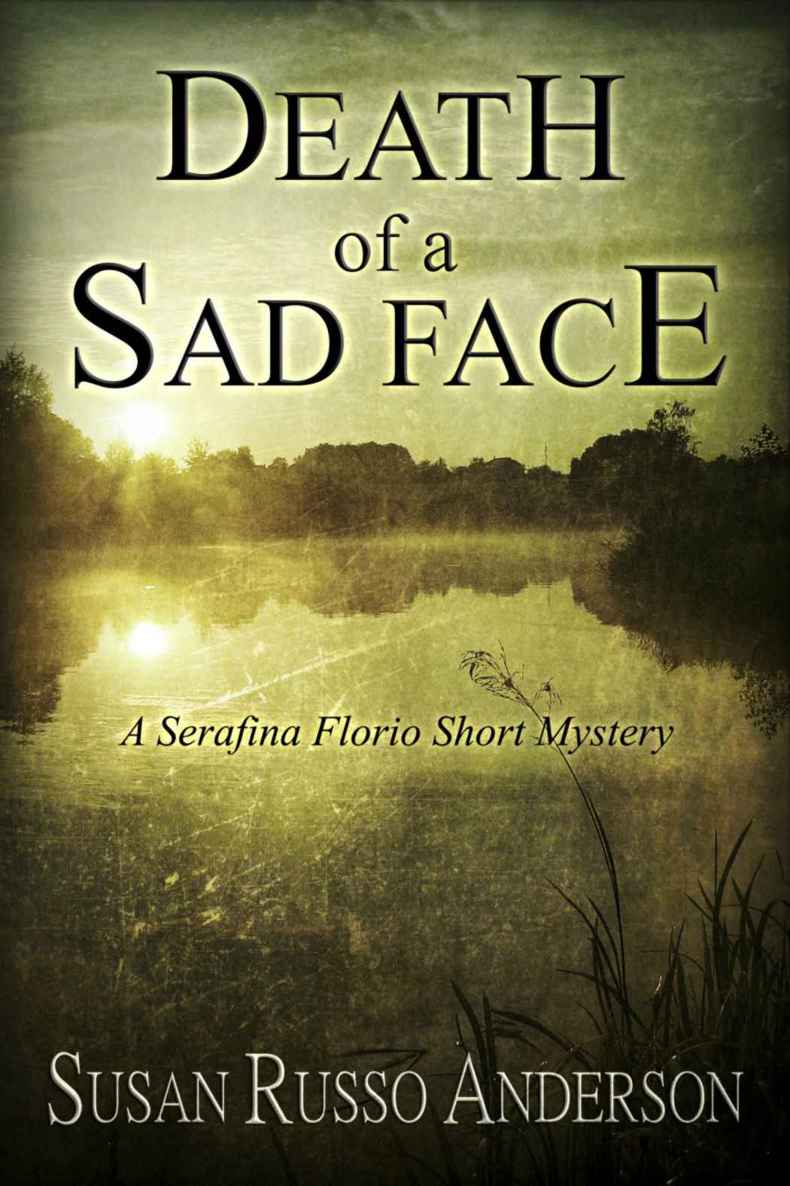 Teo And The Specter

Under A Gibbous Moon

The Leaps Of A Wizard

Death Of A Sad Face

Each of us, face to face with other men, is clothed with some sort of dignity, but we know only too well all the unspeakable things that go on in the heart.

—Luigi Pirandello,
Six Characters in Search of an Author

Death Of A Sad Face
is a work of fiction.

Names, places, and incidents are either products of the author’s imagination

or are used fictitiously. Any resemblance to persons living or dead

An earlier version of
Death Of A Sad Face
was anthologized

in
Serial Sleuths, Volume I: Haunted

A Missing Child, A Murder, And One Woman Determined to Find The Truth …

Sicily, 1868. In this short story, Serafina investigates a murder, only to discover that Teo, the orphan who lives with her family, is missing. In a harrowing scene at the end, the tracks of a killer and kidnapper converge and Serafina’s fate swings from a circus trapeze. This story is suitable for readers of all ages.

Teo
, an orphan living with Serafina’s family. He’s ten, give or take.

A Specter
who haunts Teo. Or does he?

Cecco,
her butler, deceased. The victim.

Colonna
, the venal inspector of Oltramari.

Badali
, a
carabiniere.
He’s sweet on Carmela, but that’s for another day.

Barco,
owner of a circus.

A Trapeze Artist
, works for Barco along with clowns, bears, elephants, etc.

Oltramari
, fictional city on the northern coast of Sicily close to Palermo. It’s rusty and dusty.

Barco’s Circus,
a fictional circus on the outskirts of Oltramari. It’s flea-bitten.

Teo And The Specter

Teo undressed in a hurry because he knew the specter might appear any moment. He folded his breeches and put them on the chair, ready for the next day. Struggling into his nightshirt, he lifted the bedcovers with the book in his hand, the one he’d tried to read to Maria earlier. That had been a mistake, a big one, but he only wanted her to smile at him like she had that one time. Instead, she told him to get out of her parlor because he wasn’t allowed, and anyway, she had to practice, so he’d lowered his head and left the room.

No sooner had he jumped into the bed and begun reading when there was a whoosh and a puff of smoke, and the flame of his candle flickered. He smelled something bad, like a rot from the streets.

“What are you doing, lad, just sitting around and reading, like as if you had all night and owned a candle factory besides? Books are no good for boys—girls, maybe—but not for the likes of you. Got to get yourself out of here. Best heed my words when the moon is full. Tonight’s your last chance. And don’t say I didn’t warn you.”

“Can you make Falco come back? My parents, too?”

“Why would I want to do that? They ain’t never coming back. But that don’t mean you gotta sit here and take it while that smug princess with the piano gives of her babbling. You gonna take all her moods? Her friends, too? Such a tatty blighter you are! Why, when I was your age, if a body looked cross at me, he was a mess soon enough, and this one’s a girl, besides.”

The specter spat, and his spittle spread and smoked, and made a hole in the floor. “When I was a tike, much younger than you, I left home, I did. No schooling for me. Didn’t need no prompting, neither. Made myself a fortune soon enough. Built this house. Lived like a king. But you, what are you good for but taking handouts from a widow?”

“Donna Fina’s glad I’m here. She couldn’t have stood it if I’d gone away to live in the orphanage, that’s what she says, and she told me not to pay attention to Maria. All Maria wants is her piano. It’s not her fault, born that way, that’s what Donna Fina says.”

“Boy turns into a man by leaving. Better go now, or tonight when you’re sleeping all warm in your bed, something bad’ll happen, sure enough, like as happened on that day by the sea.”

“Leave if you’ve got any sense, boy, before that runty brother of yours gets in my way and I stomp on his head.”

With that, the specter disappeared.

Teo slammed the pillow over his ears and tried not to think about his brother or about his parents. If his head were formed like the others at school, he wouldn’t have to leave, but there was nothing he could do about it, Falco had told him that. “When you’re older, if you’re lucky, your nose and lips will pop out more and the cleft in your chin will disappear. But take a look at your old man’s face, don’t you see it, you look just like him, no hope for you.” Falco had laughed and so had he, but those were the happy days.

In the happy days, his parents were alive, and he and Falco spent lots of time together and so what if the other kids didn’t like them. Falco had a silvery eye that wouldn’t stay put, so they stuck together, him and Falco, a flat face and a silvery eye. They laughed about it, the two of them sitting under the chestnut tree near the schoolyard, listening to the others whooping and playing.

But one day Falco didn’t come to school. The teacher said he’d gone, to where she didn’t know, just left with his family, no goodbyes. After that, school made his stomach ache. Not the teacher, she was fine and liked the way he read aloud, but that made it worse because after he read real good that one time, the kids hated him.

Working for Vicenzu, that was better than going to school, especially in the morning because Vicenzu made a bench for him in the front of the store where he could mend customers’ shoes, and when his fingers worked the leather, it was just like he was back in his father’s shop. The men talked to one another while he fixed their shoes. They rolled their hands and laughed and gave him tips, and it was fine, but now Donna Fina said he couldn’t work in the mornings, he must make friends at school.

Maria didn’t like him anymore, he knew, because she wouldn’t walk with him to school. She wasn’t mean all the time—too smart and beautiful for that. She loved her piano the way he loved books—that had to count for something—and she didn’t start out bossy. He didn’t know why she crossed over to being with the mean kids. Maybe the specter cast a spell on her. He tried not to mind her mood too much, and when he stood quiet and closed his eyes and thought hard about the books and mending the shoes, it was fine. But other times, like when Maria wouldn’t look at him, he felt like yanking her pigtails so hard they’d come off, but he didn’t.

He dressed and tiptoed across the hall to where his brother slept. His brother looked red tonight. Trouble keeping down the milk, that’s what the wet nurse told him, so he kissed him and put his nose close to his face. He rubbed the hair on his scalp, and his brother smiled and moved his arms and legs fast. Teo was the only one who could make his brother smile, his mother told him that, but he couldn’t think about her now or about leaving his brother, and anyway, he’d be back after he made himself a fortune.

His room faced the front and the sea, and he went to the window for one last look at the waves, and he wondered what was on the other side. Maybe the souls of the dead, like his mother and father, and now Falco who wasn’t dead, not as far as he knew, but who’d left without saying goodbye, which was as good as dead. He stood at the window and waited until the moon was high and the stars pricked the sky before he wrapped himself in Vicenzu’s old cape and stuffed a book into his sack. After kissing his brother once more, he nodded to the wet nurse and crept down the stairs and along the hall, opening the door as softly as he could, and slipped out into the night.

Serafina bit into a brioche. “Colonna’s on the front page declaiming again, as if he were the commissioner.” Had she spoken that aloud? She listened for sounds of stirring, but heard nothing, only a solemn emptiness from the floors above and the domestic banging about in the next room, keeping time to the sweep of the wind under the eaves. She went to the stove, poured herself another caffè. Returning to her newspaper, she pursed her lips and flicked the image of the simpering inspector photographed next to a twisted body in situ. The headline read, “Butler Dead, Jewels Missing.” Another crime in sleepy Oltramari. Well, she was having none of it, not that the commissioner had asked for her help yet. Instead, she set the paper aside and let her thoughts wander.

Lately, life had been filled with dead bodies, and she wasn’t in the mood for another one. First, it was her husband’s death over two years ago, followed by a bloody uprising in town, and a slew of other killings, too many to count. Most of all, she remembered the look on the faces of those weighted with sudden loss. Teo’s eyes swam into view.

She worried about them, Teo and his baby brother, ever since their arrival for a stay of indefinite duration, and hadn’t anticipated the difficulty her children had in accepting the newcomers. Maria, especially. Perhaps Serafina should have sent Teo and his brother to the orphanage like her friends advised, but after the horror they’d witnessed and her involvement in the case, she couldn’t abandon those two boys, just couldn’t do it. Her older children had welcomed them. Vicenzu, the son who now ran the family pharmacy, saw another pair of willing hands. No, it was Maria, her youngest daughter, who’d not welcomed the pair. Come to think of it, ever since Serafina had begun her sleuthing, she’d felt the heft of Maria’s spirits. Vicenzu said she was imagining trouble—the household would settle of its own accord soon enough—but she doubted it. She must spend more time with them, but how could she? The family needed the extra stipend her sleuthing fetched, and detecting required time away from home, lots of it, whole swaths of days when her mind did nothing but ruminate. And so, when she was home, she wasn’t there for her children, not really. Oh, it was all too much of a muddle.