Read Death of the Demon: A Hanne Wilhelmsen Novel Online

Death of the Demon: A Hanne Wilhelmsen Novel 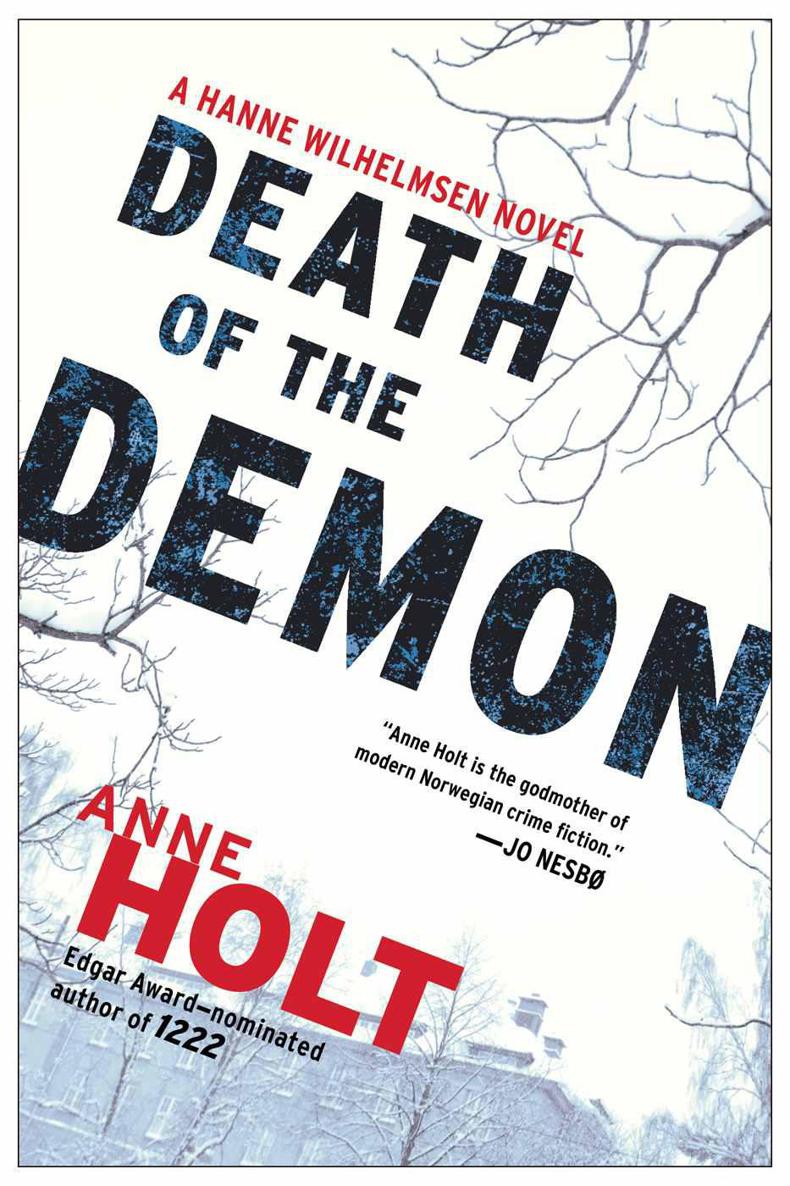 “Step aside, Stieg Larsson. Holt is the queen of Scandinavian crime thrillers. ”

“A good old-fashioned murder mystery. Wherever Hanne shows up next, my advice is to follow that wheelchair. ”

“Anne Holt is the godmother of modern Norwegian crime fiction. ”

—Jo Nesbø, author of
The Snowman

“Holt proves a masterful plotter. Unexpected twists hold up to scrutiny, loose ends are tied up and the finale leaves readers wanting more. ”

“In the hardboiled vein of Dashiell Hammett. It’s a good old-fashioned mystery. ”

“Holt is a master of balancing criminal procedure with suspense. . . . This is a series that demands to be read, and the more quickly the better. ”

Thank you for downloading this Scribner eBook.

To Erik Langbråten, who has taught me so much about The Important Things

From childhood’s hour I have not been

As others were—I have not seen

As others saw—I could not bring

My passions from a common spring.

From the same source I have not taken

My sorrow; I could not awaken

My heart to joy at the same tone;

And all I loved,
I
loved alone.

Then
—in my childhood—in the dawn

Of a most stormy life—was drawn

From every depth of good and ill

The mystery which binds me still:

From the torrent, or the fountain,

From the red cliff of the mountain,

From the sun that ’round me rolled

In its autumn tint of gold—

From the lightning in the sky

As it passed me flying by—

From the thunder and the storm,

And the cloud that took the form

(When the rest of Heaven was blue)

Of a demon in my view.

With resolute stride he stomped to the middle of the floor, where he remained standing while the snow from his enormous sneakers formed little puddles around his feet. His stance wide, as though to conceal the knock-kneed cross formed by his legs, he threw out his arms and repeated, “I’m the new boy!”

His head was clean shaven on the one side. From just above his right ear, raven-black spiky hair was combed in a curve across the crown, slicked over his round cranium and ending with a straight trim several millimeters above his left shoulder. A single thick lock draped his eye, matted like a leather strap. His mouth formed a peevish U as he tried to blow the strands into place, over and over again. His oversized quilted parka fit loosely around the waist, half a meter too long and with the thirty centimeters of superfluous length on the sleeves rolled up into a pair of gigantic cuffs. His pants hung in folds on his legs. When he managed with considerable difficulty to open his jacket, it was obvious that his pants were nevertheless stretched like sausage skins as soon as they reached his thighs.

The room was spacious. The boy thought it could not be a living room; it wasn’t furnished as you would expect a living room to be, and there was no TV. Along one wall stood a long kitchen work top, with a sink and stove. But there was no smell of food. He stuck his nose in the air and sniffed a
couple of times, concluding that there must be another kitchen somewhere in the house. A proper kitchen. This room was a recreation area. The walls were covered with drawings, and small woolen characters the children must have crafted hung from the unusually high ceiling. A gull made of cardboard and woolen yarn flapped directly above his head, gray and white with a fiery red beak that had partly fallen off and was hanging like a slack tooth from a flimsy thread. He stretched out toward it but could not reach up far enough. Instead he ripped down an Easter chick fashioned from an egg carton and yellow feathers. He pulled off all the feathers and threw the egg carton on the floor.

Beneath two vast windows with crossbars was a massive worktable. Four children seated there had stopped what they were doing. They stared at the new arrival. The eldest, a girl of eleven, skeptically looked him up and down, from head to toe. Two boys who could be twins, wearing identical sweaters and with chalk-white hair, snickered, whispered, and poked each other. A four- or five-year-old redhead sat terror stricken for a few seconds before sliding off her chair and racing toward the only adult in the room, a plump woman who immediately lifted the little one up, caressing her curls in reassurance.

“Is it only these children who live here?”

His disappointment was apparent.

“No, you know that perfectly well,” the woman said, smiling, “there are seven children living here. The three over there . . .”

She nodded in the direction of the table, sending them a stern look at the same time. If they noticed, the boys did not let on.

“What about her there? Doesn’t she stay here?”

“No, this is my daughter. She’s only here for the day.”

She smiled, as the child buried her face in the hollow of her neck and clung more tenaciously to her mother.

“Three. This is the youngest. She’s called Amanda.”

“What a show-off name. Anyway, I thought she must be the youngest. You’re too old to have children.”

“You’re quite right about that. I’m too old now. My two other children are almost grown up. But won’t you say hello to Jeanette? She’s almost as old as you. And to Roy-Morgan? He’s eight.”

Roy-Morgan was not at all interested in saying hello to the new boy. He squirmed in his seat and thrust his head dismissively toward his buddy’s.

Frowning, Jeanette drew back in her chair as Olav approached with outstretched hand, dripping with dirty, melted snow. Before he had come right up to her and long before she had made any sign of taking hold of the outstretched fingers being offered, he started to take a deep bow and declared solemnly, “Olav Håkonsen. Pleased to meet you!”

Jeanette pressed herself against the chair back and grabbed on to the seat with both hands, drawing her knees up to her chin. The new boy attempted to pass his hands down through the side, but his body shape and clothing caused his arms to remain fixed diagonally, like a Michelin Man. The offensive posture was gone, and he forgot to spread his legs. Now his kneecaps kissed beneath his stout thighs, and his big toes pointed toward each other inside his mammoth shoes.

“I know why you don’t want to say hello to me,” Olav said.

The woman had managed to steer the smallest child into another room. When she returned, she spotted Olav’s mother
in the doorway. Mother and son were strikingly alike: the same black hair, the same wide mouth and conspicuous bottom lip, seemingly unusually soft and a moist dark red, not dry and cracked as one would expect this time of year. On the boy it appeared childish. On the adult woman the lip seemed repellent, especially since she kept shooting out a similarly bright red tongue to wet her lips. Apart from her mouth it was her shoulders that aroused most interest. She did not possess shoulders. From her head, a smooth curve ran downward, as on a bowling pin or a pear, a curved line that culminated in incredibly broad hips, with hefty thighs and skinny legs to hold all this up. The body shape was more pronounced than on the boy, probably because her coat fitted. The other woman tried to make eye contact with her, without success.

“I know well enough why you don’t want to say hello to me,” Olav repeated. “I’m gross and fat.”

He stated this without a trace of bitterness, with a slight satisfied smile, almost as though it were a fact he had just stumbled upon, the solution to a complicated problem he had spent the last twelve years working out. He wheeled around, and without glancing at the director of his new foster home, asked her where he would be living.

“Could you show me to my room, please?”

The woman extended her hand to shake his, but instead of grasping it, he made a gallant and sweeping motion with his arm and made a little bow.

Then he waddled after her up to the next floor.

He was so big. And I knew that something was wrong. They laid him in my arms, and I felt no joy, no sorrow. Just powerless. A tremendous, heavy powerlessness as though I had something imposed
on me that everyone knew I would never manage. They comforted me. Everything was completely normal. He was just so big.

Normal? Had any of them tried to squeeze out a five-and-a-half-kilo lump? I was three weeks beyond my due date, I knew that, but the doctor insisted that it was wrong. As though she could know that. I knew exactly when he had come into being. One Tuesday night. One of those nights I gave in to avoid trouble, when I feared his outbursts so much that I didn’t have the strength to resist. Not just then. Not with so much alcohol in the house. He was killed in a road accident the next day. A Wednesday. Since then no man had come near me before that baby tub of lard came smiling into the world. It’s true! He smiled! The doctor said it was only a grimace, but I know it was a smile. He still has the same smile, has always had it. His best weapon. He hasn’t cried once since he was eighteen months.

They placed him on my stomach. An unbelievable mass of new human flesh that already there and then opened its eyes and groped with its wide mouth over my skin to find my breast. The folk in white coats laughed and slapped its bottom one more time. What a guy!

I knew there was something wrong. They said that everything was normal.

Eight children and two adults sat around an oval dining table. Seven of the children said grace together with the grown-ups. The new boy had been right. It was not the kitchen he had entered earlier in the day.

They were now in a room farther inside the capacious converted turn-of-the-century villa. The room had probably served as a pantry at the time the house was built. It was homey and cozy, with blue cabinets and rag rugs on the floor. The only aspect that distinguished it from a private home apart from the unusually
large bunch of kids were the rosters hanging on an enormous notice board beside the door leading to one of the living rooms: the dayroom, as the new boy had found out. In addition to the names there were little photographs of the staff on display. This was because not all the children could read, the boy had learned.