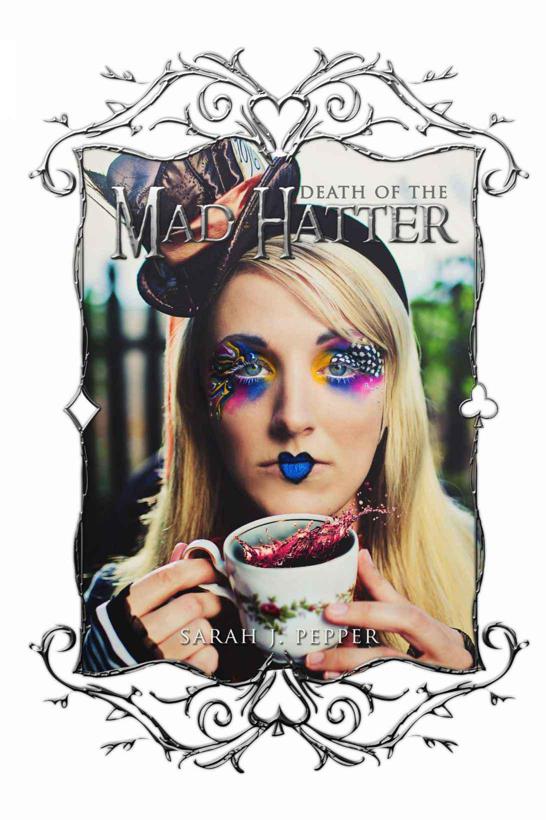 Alas
, it is also where
intoxicating

This is a work of fiction. Names, characters, places and incidents are either a product of the author’s imagination or are used fictitiously.

Of Course the World is Flat

The
Queen of Hearts kissed the King one last time before the Joker ripped his head from her hands and tossed it alongside his body. The queen’s guards picked up the royal pieces and clumsily carried the dead king away. No one spoke. Only the sound of a ticking clock interrupted the stunned silence of the night.

Standing next to
a bloody guillotine, Hearts let a love-letter the king had written slip through her fingers. Appearing out of nowhere, a Cheshire kitten, affectionately named Chez, distinguished by his purple and blue stripes, playfully pawed the letter until it was a shredded mess of paper. The queen simply watched. When the Joker reached for the remaining pieces of the letter, the kitten bit him, drawing blood.

“If you want to play dirty, may I suggest a play date
, Chez?” the Joker asked, inspecting the bite mark. His voice was as innocent as a child’s, but the look in his beady eyes was that of a psychopath’s. “I have all sorts of modified
toys collecting dust in the dungeon.”

“Don’t antagonize the Joker,
Chez. He is a bit of a schizoid,” Hearts said, picking up the kitten. She stared at the pieces of the love-letter for so long that her eye twitched. “Burn it so that no one finds out the king had loved a seamstress.”

The Joker
picked up the pieces and fisted them. The recipient of the letter showed through his fingers:
Dearest Genevine—
He held his hand up to his mouth and blew. Pieces of the letter flew into the air and burst into flames. They flickered until they reached the floor; where they turned into ash.

“I’m
required to scold you for leaving your sharp toys scattered around, Joker. It’s a pity the king had to pay for your untidiness,” Hearts said, glancing at the guillotine that was drenched in royal blood.

“Then I shall only take out my biggest toys when you order me to do so
… again,” the Joker said with a wink. “Since this is a hush-hush operation, I assume you want me to kill Genevine? Oh! Perhaps, she could have a
misfortunate accident
as well?”

“No, that woul
d be far too coincidental,” Hearts stated. “Keep Genevine alive. It’s fitting that she must live, knowing her lover is dead. Oh, and see to it that she never leaves Wonderland. All things considered, she is still the most talented seamstress in the court, and I’ll need someone to sew me a black dress to wear at the king’s funeral.”

The Jack had prophesied: If the king loses his head, then the Queen with a Bleeding Heart would rule the Red Court until Time ceased to move forward. When a second carried on for infinity, every creature in Wonderland would tip their Hat to the misfit
girl with a Boy’s name (or was it a boy with a Girl’s name?) who’d end the Reign of Terror. However, it all hinged on the One-Eyed Hare being able to convince an uninspirable Heir that the impossible was indeed possible—like stopping time—and that Love was worth a Beheading.

In the end, would it matter who
Reigned?

“Reign of T
error—everyone acts like it’s a
bad
thing,” the Queen of Hearts said, reading the script that Jack of Diamonds, a.k.a the prophesier, had scribbled on an ingredients page of a violet book entitled,
Sweets for the Rabbit Hole Voyager
. The Mad Hatter’s crest, M.H. and a top hat, was printed on the bottom of every odd numbered page inside the book.

Hearts tore the last stanza from the
Bleeding Hearts Prophecy
, crumpled it into a ball, and smashed it between the pages of
The Lazy Killer’s Poisons,
another of the Mad Hatter’s works.

What a silly notion—dying for love. Ugh! (Cue eye-roll)

Nevertheless, the faux love of her life did “misplace” his head, and he was
king, until today. These two happenstances made Hearts believe that the
Bleeding Heart Prophecy
was about her and that
her
head would roll. And furthermore, it
always
mattered who reigned!

She pushed both of the Mad Hatter’s editions back onto the shelf, but made sure the one about poison was flipped upside-down, just to see if any of her
feline servants would notice the disarray of her library. With her hands behind her back, Hearts stepped down from her golden step stool and paced around the library, which was filled with more books than anyone could read in a single lifetime.

“I have no heirs,”
Hearts said, thinking out loud. “And I’ve never been fond of hares. Hence, i
t would behoove me to damage the reputation of all the rabbits in my court, just in case this
Bleeding Hearts Prophecy
holds some weight.”

Wandering aimlessly around her library, she spotted a speck of dust on the third shelf. She walked over to the fainting couch and r
ang a silver-plated bell. Quickly, a
glaring
of cats raced through the door. They stood at attention on a glittering line that Hearts drew years prior, when she still loved the king.

But, that was a long time ago.

All of the cats toed the line, except for the Cheshire kitten, Chez
.
His butt was high in the air as he got ready to pounce on a hopping bug that was hiding in the shadows next to the king’s personal chambers.

“It’s filthy in here,” Hearts s
aid as she walked past each cat, giving them a look of severe disapproval. She stopped in front of a black cat whose tail fluttered whenever she passed. “You have forty-eight seconds to remove the dust I located in this room, or you’ll spend a week in solitary confinement with the Joker.”

In a panic, t
he cats raced around the polished library, frantic to locate the speck of dust that the queen had spotted. The smaller cats flipped onto their backs and let the bigger cats use their furry bodies as dust rags. In the meantime, the queen collapsed onto a scarlet colored couch. The Cheshire kitten, who missed the formation on the glitter line, pounced on the cushion beside her. A feisty grasshopper wiggled in his mouth.

“What did you bring me,
Chez?”

Chez dropped the grasshopper on the queen’s lap.
The bug wore a tiny dress coat with a broken heart and the King’s initials on them: E.E. The bug wheezed, which made the kitty’s incisive purr grow louder.

Chez pawed at the grasshopper and said, “I found t
his hoppy creature snooping around the king’s chamber.”

“Spare me from this vile kitten, my Queen! I did nothing wrong,” the grasshopper begged. He held up a miniature violin and a mangled rod. “I was only
near the king’s chambers tonight because he enjoys my music before resting. I barely cracked his bedroom door when this feline attacked me! The king would never allow such behavior; so unbecoming!”

Hearts petted
Chez behind his ears and talked in a baby voice. “Haven’t you heard? The king had a misfortunate

Every single cat in the library skidded to a halt. Their eyes glowed in the darkness of the night. The grasshopper swallowed noticeably hard.

“Accidental beheading,” Hearts recited. “I was beside myself with horror as it happened. I’ve already spoken to the Joker about leaving his toys around. It shall never happen again.”

“Eddie, the King of Hearts, is not clumsy,” the grasshopper said and cleared his
throat. He glanced at the other cats. One shook his head ‘no’ to caution the bug not to disagree with the queen, but the grasshopper wouldn’t listen. “Eddie would never have
accidentally
tripped on the weapon. He had to have been pushed!”

“Are you calling me a liar, grasshopper?” Hearts
spat.

“Eddie was n
ot a klutz,” the grasshopper said, nervously.

“
The king’s proper name is
Edward
, not Eddie,” Chez corrected, “And he wasn’t
pushed!
He
tripped
over me and fell onto the Joker’s big boy toy.”

“That’s right,
” the queen said, giving Chez a quick pat on his head.

“That’s not what I saw
when I was on my way to play for the king,” the grasshopper said, then slapped his hand over his mouth.

“Did you see something to contradict my claim?” Hearts lowered her face so that she and the grasshopper were eye-level.

The grasshopper shook his head. The more visibly his legs trembled, the wider the queen’s smile grew.

“Leave us, my glaring,” Hearts
demanded. “The grasshopper and I have much to discuss regarding this unfortunate accident involving my dear, late husband.”

The cats scampered out of the library, leaving
Chez behind. The grasshopper’s eyes darted to the exit as the last cat closed the door.

“Well, the k
ing tripped over an
unsuspecting
kitten right before the Joker lost his grip on the guillotine rope, but Edward took the risk of
death
when he broke my heart!” The queen blinked away a nonexistent tear. “Edward wanted to leave me and our so-called loveless marriage, for a seamstress! Leave me? For a seamstress? Can you imagine my humiliation?”

“Why are you telling me this?” the grasshopper asked.

She affectionately petted her kitten. She smiled an appeasing smile, but it quickly turned into a sneer. “Because Chez will make sure that you never tell a soul.”

The grasshopper took off hopping toward
the room belonging to the Prince of Spades. “Robby! Robby! Help me!”

“Sic
him, Chez!” the queen ordered.

Chez disappeared
, only to reappear in front of the grasshopper. The kitten flicked out his claws. He fixated on him with blood thirsty eyes.

The grasshopper gulped and with his last breath, he shouted, “Hearts killed
the king, Robby! She pushed Eddie over Chez so he’d land on the guilloti—”