Death on the Nevskii Prospekt 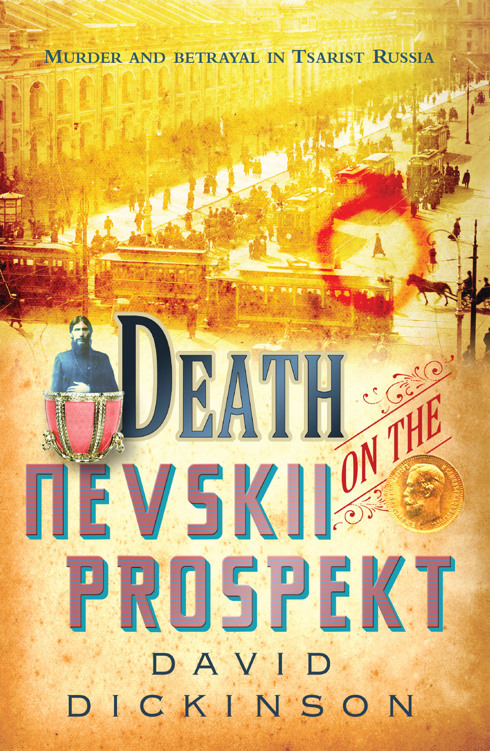 David Dickinson
was born in Dublin. He graduated from Cambridge with a first-class honours degree in classics and joined the BBC. After a spell
in radio he transferred to television and went on to become editor of
Newsnight
and
Panorama.
In 1995 he was series editor of
Monarchy,
a three-part examination of its current
state and future prospects. David lives in London.

‘A cracking yarn, beguilingly real from start to finish … you have to pinch yourself to remind you that it is fiction – or is it?’

‘A kind of locked bedroom mystery … Dickinson’s view of the royals is edgy and shaped by our times.’

Titles in the series

Death of an Old Master

Death of a Chancellor

Death Called to the Bar

Death on the Nevskii Prospekt

Death on the Holy Mountain

Copyright © David Dickinson, 2007
The right of David Dickinson to be identified as the author of this work has been asserted by her in accordance with the Copyright, Designs & Patents Act 1988.
All rights reserved. This book is sold subject to the condition that it shall not, by way of trade or otherwise, be lent, re-sold, hired out or otherwise circulated in any form of binding or cover
other than that in which it is published and without a similar condition including this condition being imposed on the subsequent purchaser.

For Alan and Heather

PART ONE: THE WINTER PALACE

Any minute now, she knew, the proper contractions would start. It was not, after all, the first time she had given birth. Even this evening, when her family knew what was
happening, she could hear the excited sounds of her four daughters as they gossiped outside in the corridors. This time it would be different. This time she would give birth to a son. Had not
Philippe, her mystic Frenchman from Lyons, promised her this while he hypnotized her soul and stroked her face with those long slender fingers of his? This time, the gunners at the Fortress of
Peter and Paul, over fifteen miles away on the other side of St Petersburg, would have to sound out a three-hundred-round salute for a boy rather than one hundred rounds for a girl. This time the
people of St Petersburg would have to clap and cheer rather than mock and sneer as they had done so often in the past. The woman looked into her tiny private chapel with its single icon of the
Virgin Mary. Mary would be with her on this journey too. Philippe had promised.

Outside the door stood an enormous Negro dressed in scarlet trousers and a gold embroidered jacket with a white turban. Lurking in the passages downstairs were policemen on duty against the
arrival of an assassin, regarded as almost as likely as the arrival of a son. Sentries marched continually up and down around the perimeter of the palace. More soldiers were guarding the grounds
and searching every visitor who came to call. Around the high fence of the imperial park bearded Cossack horsemen in scarlet tunics and black caps galloped in ceaseless patrol, twenty-four hours a
day. Theirs was a watch that would last till eternity. For this was Tsarskoe Selo, the Tsar’s Village in English, some fifteen miles from St Petersburg. It was at this time the principal
residence of the Tsar of All the Russias and his wife Alexandra and their family. Alexandra was the expectant mother, anxious to bring forth an heir to her husband’s throne. The threat of
terror was so great that the imperial family could feel safe only here. They were too exposed in the vast expanses of their main residence the Winter Palace in the heart of their capital, St
Petersburg. Two Tsars had been assassinated the previous century. Nicholas the Second, the latest target, had watched his grandfather bleed to death in the Winter Palace after a terrorist bomb
ripped open his stomach and scattered bloody fragments of his body around Palace Square. Government ministers, provincial governors, Ministers of the Interior were regularly blown up by terrorist
bombs. Russia did not lead the countries of Europe in many things, except for her size. But she was the terrorist capital of the world, her young people almost queuing up to die in assassination
attempts, the reign of terror imposed by the secret police, the Okhrana, the despair of liberals in Moscow and St Petersburg.

Black, Alexandra thought bitterly, black was the colour she had brought to her new home from Coburg in Germany all those years ago. Black, the colour of ravens, black the colour of crows, black
the colour of death. She remembered one of the courtiers at home reminding her to pack her mourning clothes when she set off to join her fiancé in the Crimea where his father Tsar Alexander
was dying. Nicky, or Nicholas the Second, to give him his formal title, had wept not just for his dying father but for himself, unprepared, unfit and unwilling to sit on the throne of the Romanovs.
Even then, even before she was married, Alexandra had known that a major part of her role would be to support him, to try and give him the strength he needed to rule his vast empire that covered
one sixth of the world’s surface. As she watched him give way to his mother, to his uncles, sometimes, it seemed to her, to the last person who talked to him, Alexandra often felt that she
would have done the job much better herself. Black, she remembered again, she had worn the black of mourning when she was inducted into the Russian Orthodox Church as family members arrived in
droves from all over Europe to pay tribute to the dead Alexander the Third. Black on that long, slow train journey from the Crimea to St Petersburg, and the sad stops in the major cities on the way
for the populace to pay their last respects to the dead Tsar and stare at the woman from Germany who had come to marry his son.

She remembered the worst week of her life which should have been the best, the week of her coronation in Moscow. Hundreds if not thousands of people had been crushed to death in a stampede at
Khodynka Field outside Moscow, a crowd that had gathered to receive traditional coronation presents from the Tsar and panicked when told there would not be enough to go round. In the stampede
towards the front to grab things before the supply ran out, people had fallen into ditches, or simply tripped and been trampled to death. Even now, she could still see the miserable carts they had
used to take the bodies away, the corpses covered by rough tarpaulins or sections of dirty blankets. Cart after cart had lined up to take the dead away for burial, their relations weeping into the
summer air, the stench of death inescapable. That night she and Nicky, against her instincts, had gone to a ball at the French Ambassador’s and been condemned as heartless by almost the
entire nation. The uncles had pointed out how much money had been spent on the ball with thousands of flowers imported by special trains from the Riviera. They had pointed out how insulted the
French would be. The cleverest uncle – the competition was hardly of Olympic standard – said they had to attend or the French bankers would cut off the loans that were the mainstay of
the Russian economy. After that, she knew, they stopped calling her the English whore because Queen Victoria was her grandmother. Now they called her the German bitch instead. And every time she
produced another daughter they called her the useless German bitch.

Philippe from Lyons would change all that, Philippe Vachot who had brought so much hope into her life. She and Nicholas had met him at the home of two Montenegrin princesses who were interested
in the occult, in seances and spiritualism. Philippe was a hypnotist who was sometimes possessed of spirits and talked to them in voices of the dead come back from the other side. The room for
these ceremonies was quite small, two walls lined with icons of Christ and the Madonna, pairs of sad eyes sucking you into their embrace. The Montenegrins had hundreds of candles on the walls.
Sometimes they had singers in the next room so that ghostly Vespers floated through the walls. The singers were all peasants from the Montenegrins’ estate in the country and were said to live
in a hut at the bottom of the garden. Alexandra had misty memories of what Philippe said to her when she was coming out of hypnosis or appearing as one of her long-lost Coburg relations about whom
he was prodigiously well informed. First he told her she would have a son, that there would spring forth a rod from the stem of Jesse. Then he told her she was pregnant. Now she was here on her
bed, waiting for the most joyous moment of her life. Philippe had told her not to tell any of the normal imperial doctors what was happening. Let God’s work be a surprise to the unbelieving
men of science, he had told her. Let them not pollute your body with their examinations or your system with their medicines of modernity. Rather let God work his will and his changes in the temple
of your womb. But things seldom remain secret in a royal palace. Even as the Empress lay wreathed in her dreams of glory, the official doctors were pacing up and down in the corridors of the palace
downstairs.