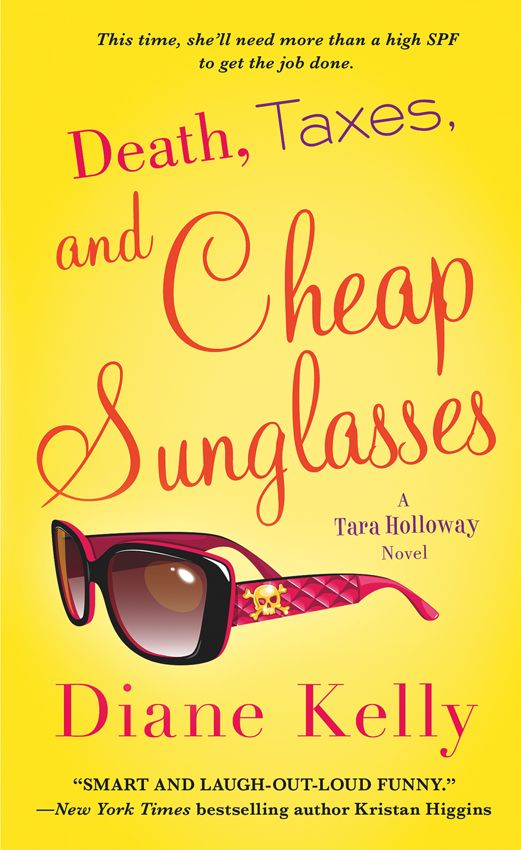 To my friend Cindy Barron-Taylor, who is always a sparkling ray of sunshine

First, a shout-out to my repeat offenders.

At the top of the list is my fantastic editor, Holly Ingraham. You always know which way to steer me when I veer off course. I appreciate all you do to make my books better!

Thanks to Sarah Melnyk, Paul Hochman, and everyone else at St. Martin’s who has helped to publicize my novels and get this book to readers. You’re a top-notch team!

Thanks to Danielle Fiorella, Monika Roe, and Iskra Design for another perfect cover. You guys sure do know your stuff!

Thanks to my agent, Helen Breitwieser. I’m grateful for all you do!

Thanks to the awesome Liz Bemis-Hittinger of Bemis Promotions for my wonderful Web site, newsletters, and bookmarks. I don’t ever want to find out what I’d do without you!

Thanks to the many members of Romance Writers of America for your support and camaraderie, as well as the hardworking national office staff. Joining RWA was the smartest decision I ever made!

Thanks to Aimee Mata for answering my questions about banking, and for Sandra Castro for putting me in touch with Aimee. Sandra, I owe you a margarita.

Thanks to my son, Ross, for schooling me in World of Warcraft. Figures you’d know the hot animated babes.;)

And, lastly but not leastly, thank you to my readers. It makes my day when I hear from you, and I hope this book will bring you lots of laughs!

I slid my gun into my purse, grabbed my briefcase, and headed out to my car. Yep, tax season was in full swing once again, honest people scrambling to round up their records and receipts, hoping for a refund or at least to break even. As a taxpayer myself, I felt for them. But as far as tax cheats were concerned, I had no sympathy. The most recent annual report indicated that American individuals and corporations had underpaid their taxes by $450 billion. Not exactly chump change. That’s where I came in.

You’ve probably heard of my earlier exploits, but just in case you haven’t, let me introduce myself. I’m IRS Special Agent Tara Holloway. My hair is chestnut brown, my eyes are grayish blue, and I comport myself with the style, manners, and grace expected of all graduates of Miss Cecily’s Charm School—except when I don’t. I might stand just five foot two, but I stand my ground. When men say I’ve got a nice rack, they’re not lying. My gun rack holds five rifles. My bra, on the other hand, holds a couple of 32As.

After earning my accounting degree from the University of Texas—
hook ’em, Horns!
—I spent four years preparing tax returns at a CPA firm here in Dallas. I learned a lot about taxation, business, and business people, which was great. But I sat at a desk for eight to twelve butt-numbing hours a day, which was
not
great. When my butt refused to stay in that chair a second longer, I applied for a job with IRS Criminal Investigations.

The agency accepted me as a candidate for the program, then did its best to kick my ass in training. Fortunately, I’d learned how to study hard at UT, developed a good work ethic at the accounting firm, and been taught by my father how to shoot an empty can of root beer off a fence post at a hundred yards. I aced both my written exams and my physical and weapons tests, so now here I was, fighting for truth and justice on behalf of honest taxpayers like you.

And can I get a raise, please?

It was a gorgeous spring morning in late March as I drove through downtown Dallas with the top down on my red convertible BMW. Despite being mere knockoffs of the more expensive Brighton brand, my tortoiseshell sunglasses blocked the early sun’s rays with reasonable effectiveness. My stereo speakers blared Miranda Lambert’s feminist revenge anthem, “Gunpowder & Lead.” Yep, Miranda got it right. Those two things were what little girls were made of, at least where I was concerned. Nobody had ever accused me of being made of sugar and spice. Not unless that spice was cayenne pepper.

As I turned into the parking lot of the IRS building, my eyes noted a sporty Volvo C70 in the rear of the lot. Given the rolled-up purple yoga mat standing in the backseat, the pink hoodie hanging from the driver’s headrest, and the “Above the Influence” bumper sticker gracing the back bumper, I knew the car belonged to DEA Agent Christina Marquez. She and I had worked several cases together in the past and become fast friends. You pair two badass female federal agents together and sic them on a drug-dealing ice cream man and they’re bound to bond.

I pulled into the spot next to Christina’s car, punched the button to raise the top on mine, and removed my sunglasses, sliding them into the breast pocket of my blazer. Before climbing out I performed one last visual check in my vanity mirror, fished my tube of Plum Perfect gloss out of my purse, and applied a fresh coat. Probably not necessary since I’d been dating my coworker, Senior Special Agent Nick Pratt, for months now and he’d seen me many times without any makeup on. Still, it never hurt to put some effort into it, right? Our relationship was solid, but we had yet to officially seal the deal with rings and a license. Of course we’d only been dating a few months and it was too soon to think about marriage. It wasn’t too soon to think about thinking about it, though. I was already in my late twenties and Nick had hit thirty. We weren’t exactly kids anymore. That fact didn’t prevent us from acting like children on occasion, though.

I rode up in the elevator, sipping my skinny latte as I thumbed through e-mails on my cell phone. Mom had sent me a recipe for pecan-encrusted fried okra.
As if I ever cook. Give up on it, Mom!
My favorite clerk at Neiman Marcus had e-mailed to let me know the petite department had a new line of suits in stock. I’d stop by on my lunch hour to take a look. My best friend and roommate, Alicia, who worked at the same downtown accounting firm I’d escaped from nearly a year ago, had sent me a message from her office at 6:08 this morning that simply read
Ughhhhhh …
Poor girl. Looked like tax season was getting her down. I’d have to make up a pitcher of peach sangria later and have it waiting for her when she got home.

As I stepped off the elevator, my eye caught a flash of lima-bean green over which towered a pinkish-orange beehive. My boss, Lu “the Lobo” Lobozinski, was heading down the hall that led to my office. Christina, dressed in black slacks and a gray blouse, walked beside her. The two slowed in the hallway as they approached my office, but rather than turning right into my digs they turned left into Nick’s office, which sat across the hall from mine. After they slipped inside, Christina pulled the door closed behind them.

What was Christina doing meeting with Lu and Nick? Did the DEA have another case that called for an agent with financial skills? If so, why hadn’t she recommended
me
for the gig? Christina and I always had fun working together. Performing stakeouts, plotting tactics and strategies, taking down criminals. Heck, I think some of the criminals got off on being manhandled by a couple of young women.

Lu’s voice was the first I heard. “Got a new drug case for you, Nick.”

Drug cases were standard fare at IRS Criminal Investigations. Drug dealers rarely reported their earnings and paid their taxes to Uncle Sam. The few that did usually laundered the money in an attempt to make it appear as if the funds were legit.

Christina spoke next. “We’ve been working with Mexican drug authorities for years trying to bring down an extensive drug network. We recently got a break that could help us nail these guys.”

Nick spoke now. “A break? What kind of break?”

“A guy on the inside who wants out,” Christina replied. “An informant. Alejandro was forced into the family business, so to speak. He never wanted to be involved.”

And apparently he was now willing to spill the
frijoles
to help law enforcement.
Bueno.

Despite my best efforts to eavesdrop, my ears couldn’t quite make out what she said next. Was she asking Nick to help track a money trail? To review financial records to prove money laundering? While Nick had the financial skills to perform a financial analysis, any agent in the office was equipped to handle that type of work. So, why Nick? What did he have to offer that the rest of us didn’t? Only one way to find out. I pressed my left ear closer to the frame and stuck a finger in my right to block out the soft
whir-whir-whir
of the copier down the hall.

“I’m going to pose as Alejandro’s girlfriend,” Christina continued. “We’ll bring you in as a friend who can help move the money.”

I had the same question myself.

“No contact with the outside world until the case is resolved.”

The outside world?
Wait a cotton-pickin’ minute here. Would I be considered part of that “outside world”? Or, as a fellow member of law enforcement, would I be exempt from the no-contact rule?

Nick hesitated for a moment before responding. “How long do you expect the investigation to take?”

“Weeks,” Christina said, “maybe months. But we’ve got to put some people on the inside if we’re ever going to break up the ring. This could be our chance to finally nail El Cuchillo.”

That doesn’t sound good at all.

I swallowed hard and kept listening.

“He’s a key member of the network,” Christina said, “one of its most trusted drug runners and a suspect in dozens of kidnappings and murders in Mexico. His weapon of choice is a butcher knife. Evidently, he thinks using a gun to kill someone is too impersonal. If we can get him, we could take down an arm of the Sinaloa cartel.”

In the Hall of the Martian King by John Barnes
Surrendering To His Mrs. Right (Soul Food Diner) by Mason, a.c.
A Trust Betrayed by Candace Robb
The Protector by Madeline Hunter
Nobleza Obliga by Donna Leon
Making Enemies by Francis Bennett
Duella Book 3: The Witch and the Vampire Series by Fawn Lowery
Animal Secrets: A Paranormal Romance (The Animal Sagas) by Charles, Susan G
Prizzi's Honor by Richard Condon
Emma and the Cutting Horse by Martha Deeringer
Our partner