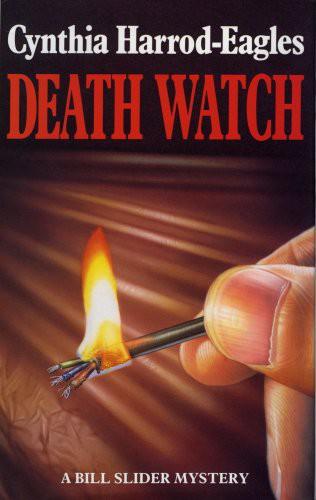 Cynthia Harrod-Eagles
was born and educated in Shepherd’s Bush, and had a variety of jobs in the commercial world, starting as a junior cashier at Woolworth’s and working her way down to Pensions Officer at the BBC. She won the Young Writers’ Award in 1973, and became a full-time writer in 1978. She is the author of over sixty successful novels to date, including thirty volumes of the
Morland Dynasty
series.

The lot of the working copper is getting harder, what with the PACE Act, the PLUS programme, and other life-threatening initials issued by the Home Office without a health warning. Add to that the regular rousting by top brass like ‘God’ Head and ‘Madarse’ Maguffy, a budget tighter than a Victorian corset and a DC who thinks he’s in a John Le Carré novel, and it makes for a trying time for Detective Inspector Bill Slider.

But when a noted womaniser dies in mysterious circumstances in a sleazy motel and the whole of his murky past comes to light, Slider begins to question whether the game is worth the candle. Right is right, and indivisible. As soon as he’s solved the motel mystery, and found out what the Neary boys and Gorgeous George are up to, Slider’s going to have to start putting his own house in order …

THE MEASURE OF DAYS

This book is dedicated to Gordon Barker, for all his kindness and patience in putting me straight about The Job.

CHAPTER FOUR: Talk to the Animals

CHAPTER NINE: The Snake is Living Yet

CHAPTER ELEVEN: A Fish by Any Other Name…

CHAPTER TWELVE: Strangling in a String

CHAPTER THIRTEEN: The Dear Dead Days of Long Ago

CHAPTER SIXTEEN: Half Some Sturdy Strumpet

CHAPTER SEVENTEEN: Not Even a Bus

I WAS BORN AND BROUGHT
up in Shepherd’s Bush. Most of the places mentioned in this book are real, but all the characters are fictitious.

There is, of course, a real Shepherd’s Bush Police Station, but I think I ought to explain that I have never set foot in it. This is not out of any disrespect for the men and women who work there, but purely so that no-one could possibly say that any of my characters was based on a real person.

I could have invented a police station and its ground, but I’ve never felt the Bloggs Lane, Anytown convention was very convincing; and besides, it’s much more fun this way.

I have done my research at quite a different police station. If anyone feels they recognise a policeman of their acquaintance in these pages, it can only be because coppers after all really are much the same the Met over – thank God!

IT WAS A GREY AND dismal day, arriving, after the manner of London buses, immediately behind two others precisely similar. The last thing Slider felt he needed on such a morning was a fire.

A fire when it was alight and glowing in a fireplace was a delightful thing, of course. Slider’s memory immediately offered him a beguiling image of Joanna, naked and rosy on the hearthrug, and he put it sadly aside. A fire when it was out, and had been where it shouldn’t be, was an entirely different thing. It was nasty and depressing, and probably the dirtiest thing in the known universe, with the possible exception of Dirty Donald, the vagrant drunk who lived under the railway bridge in Sulgrave Road.

Atherton was on the spot already – of course – exquisite as a cat, in pale grey trousers and grey suede shoes, his long bony hands thrust into his pockets in a way that would make a tailor feel faint. He was singing under his breath, a sad little policeman’s ditty entitled
If This is Life, My Prick’s a Bloater.
He managed to make it sound quite cheerful.

‘I don’t know why you’re so happy,’ Slider said. ‘Those trousers are going to be ruined.’

‘I hate fires,’ said Slider. A nosegay of disgusting odours assailed him, and he shivered like a horse that smells pigs. Every man has his particular vulnerability: Atherton, for
instance, couldn’t bear the dirty-bodies-and-old-piss stink of winos, and since his first day in the Job had gone to extreme lengths to avoid having to arrest them. As a matter of fact, he’d never really liked having to arrest anyone, and during his brief time in uniform he’d earned the nickname of The Gurkha, because he took no prisoners.

For Slider, anathema was the smell of carbonised everyday life. He stared resentfully at the sodden ruin before him. ‘Why on earth would anyone want to open a motel in the Goldhawk Road?’ he demanded of the morning.

‘I suppose it isn’t that far from the M4,’ Atherton said helpfully, though he knew it wasn’t really a question.

The main building was an Edwardian pub/hotel, built on the site, it was said, of an old coaching inn called the Crown and Sumpter. A natural phonic confusion, aided perhaps by the prevalence of tuberculosis in the area between the wars, had blighted its popularity and it had never thrived.

In the late sixties a single-storey extension in the New Brutalist style had been added on a bomb-site at the back, and the Crown Motel had been born. Since then it had changed hands several times with ever-declining fortunes, gaining no very savoury reputation on the way.

Then in eighty-five it had been bought by a chain, completely refurbished, renamed The Master Baker Motor Lodge, and apparently settled down into moderate respectability, despite the inevitable popular corruption of its name to The Masturbator.

The ancient history Slider had from Sergeant Paxman, a grizzled thirty-year veteran who had served his whole career at Shepherd’s Bush nick, and knew every inch of the ground. Paxman – known inevitably as Pacman because of the way he chewed the heads off erring PCs – had been on duty last night when the fire was reported, and had not yet gone off when Slider came in.

‘Of course, when I say respectable, that’s not to guarantee anything,’ Paxman added. He had a large,
handsome face, round, rather blank eyes, and tightly curling hair, and needed only a pair of horns and a ring through his nose to complete the resemblance to a Hereford bull.

‘A fair amount of naughtiness still goes on. The local toms use the annexe, and the better class of queers meet each other there. You know, the respectable married men on their way home from the office, popping in for a spot of illegal parking before they go home to the wife.’

‘I suppose it is quite handy for the tube,’ Slider said absently.

Paxman’s brown eyes became stationary as he wondered how far that was a joke. He had never really got to grips with Slider, whom he thought a strange man. ‘But we don’t get any trouble from them, as you know,’ he resumed, giving it up. ‘The management runs a tight house, and we’ve never had so much as a disturbance there in two years.’

‘What about this fire?’

‘I’ve heard nothing yet. They did have a dodgy fire back in seventy-five or ‘six. Insurance scam. But the present owners are making ends meet all right, and they’ve not long done it all up inside, so there’d be no reason for them to torch it.’

Thus forearmed, Slider faced Atherton. ‘So what have we got?’

‘The fire started some time before two this morning. A passer-by saw the flames and raised the alarm at ten to two, but it had taken a good hold by then. You can see it started in the end cabin – number one – and by the time the FS got here they couldn’t get near it. It wasn’t until the fire was out that they were able to get inside, and then they found the body. That was about half past six.’

‘Perfect timing,’ said Slider. The CID’s night shift ended at six in the morning, and the early shift didn’t come on until eight. Between six and eight, the Department was unmanned. ‘Who was on last night? Hunt, wasn’t it? He’ll be sorry to have missed the fun.’

DC Hunt, having passed his sergeant’s exam –
mirabile
dictu
– was deeply anxious to catch top brass eyes, to secure himself a posting.

Atherton grinned. ‘Oh, but he didn’t! When the word went out that there was a corpus, Hunt was still in the canteen having breakfast. He volunteered, the twonk!’

Slider shook his head disbelievingly. ‘The man’s sick. Sick. Well, we’d better go and take a look, I suppose. I’ll talk to Hunt later.’ A cruel thought occurred to him. ‘I could make him exhibits officer. That’d keep him out of trouble.’

Atherton smiled approval. Ensuring ‘continuity of evidence’ was a painstaking, time-consuming and largely boring part of an investigation. Just what he’d have wished for Hunt himself. Trouble was, Hunt’d probably like it.

The annexe stuck out at right-angles from the back of the hotel, a single-storey building divided into ten cabins in back-to-back pairs. Numbers one and two, the furthest away from the main block, were almost completely destroyed; those nearer the hotel were progressively less damaged, ending with nine and ten, smoke-damaged and wet but intact.

The senior fire officer on the spot was the Divisional Commander, Carlton by name. He was waiting for them in front of cabin number one in the manner of the mountain not coming to two very minor Mahomets. He was a big man, standing square and capable amid the destruction in his yellow helmet and unshakeable boots.

‘… And summoned the Immediate Aid, of London’s Noble Fire Brigade,’ Atherton chanted appreciatively. ‘God, those uniforms are sexy! Who’d be a copper?’

‘Morning,’ Carlton said with a spare smile as they reached him. There was sometimes a faint hostility between firemen and policemen – more especially since their pay structures had parted company to the former’s disadvantage. Carlton had often been vocal on the unpalatable fact that the police were nominally in charge of any multiple-service incident, which could theoretically
mean a two-year PC giving orders to a twenty-year fireman. On the other hand, members of the CID deplored the way firemen burst onto a scene with their axes, boots and hoses and utterly fucked up the evidence before they could get at it. It was as long as it was broad.

‘Hullo Gordon,’ Slider said pleasantly. ‘Rotten start to the day – though I suppose it’s all routine to you. What’ve you got for me? It looks as though it was a pretty fierce blaze.’

Carlton’s face took on animation. ‘This place was a death trap. It was an inferno waiting to happen. I’ve been saying so for years.’

Dead Seth by Tim O'Rourke
The Tower Treasure by Franklin W. Dixon
Isles of the Forsaken by Ives Gilman, Carolyn
Rock Bottom (Bullet) by Jamison, Jade C.
Your Heart Is a Muscle the Size of a Fist by Sunil Yapa
Dragon's Melody by Bell, Ophelia
Tattler's Branch by Jan Watson
The Eye of the Abyss by Marshall Browne
The Choosing by Jeremy Laszlo, Ronnell Porter
Be Mine by Kleve, Sharon
Our partner