Read Death Will Help You Leave Him Online 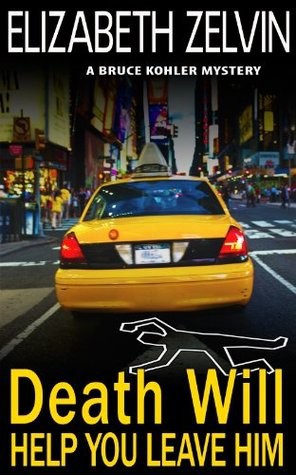 Praise for
Death Will Help You Leave Him
, the Second book in the Bruce Kohler series:

“A wonderful book—authentic, compassionate, and tough.”

“Zelvin’s story is good and her dialogue sparkles, but what’s best is how she’s created characters who are both over the top, and completely believable. Just like real people!”

“Zelvin [has the] ability to bring us both tragedy and humor, sometimes in the same sentence… I’ve become addicted to the series.”

“A heartbreaker of a novel. Through seamless prose and her lead series protagonist Bruce Kohler, Elizabeth Zelvin exposes the internal and external demons of recovering addicts and recovering lovers. Much more than a mere whodunit,
Death Will Help You Leave Him
is a whydunit and the ‘whys’ will haunt you long after the book is read.”

“With humor and heart, Zelvin writes about the challenges of sobriety and the beat of New York City with impressive accuracy.
Death Will Help You Leave Him
is a terrific read.”

—Alafair Burke, author of
Never Tell
and
If You Were Here

I scootched into the back of my best friend Jimmy’s Toyota. His girlfriend Barbara’s dripping umbrella almost impaled me as I fell onto the seat. I shook myself like a dog.

“Tell me again,” I said. “Whose apartment is it? And who’s the corpse?”

“Her pigeon’s boyfriend.” Jimmy swiveled to look at me. Bad idea. The car skidded on the slick wet surface of Third Avenue.

The maniacs who drive New York taxis wove and dodged all around us as we headed uptown.

“Bruce, I appreciate this.” Barbara twisted around to see me better over the high back of the passenger seat. “I wasn’t sure you’d come out in the rain in the middle of the night.”

“Hey, no problem. Pigeons have boyfriends?”

“My Al-Anon sponsee,” she elaborated. “Luz. It’s her apartment. She found her boyfriend dead on the floor when she came home. And don’t say ‘corpse.’ She was hysterical when she called me, and the cops are there.”

I had a guy of my own that I called when I thought I might not make it through the night without a drink.

“So when do Al-Anons call their sponsors?” I asked. “Short of sudden death.”

“When somebody else’s life starts flashing before their eyes,” Jimmy said.

Barbara swatted his upper arm, not hard enough to endanger us.

A sudden cloudburst sent runnels of water streaming down the windshield. Jimmy clicked the windshield wipers into high gear. I admired the blurry red and green glow of the traffic lights and started to wake up.

“Cops. Do they think it’s murder? If so, ‘I’m sorry’ wouldn’t be the smartest thing to say.”

“That’s why she needs us,” Barbara said. “When Luz called me, she said, ‘Frankie’s dead, and they think I killed him’.”

“Uh, doesn’t she have anybody closer?” I asked. “Family?”

“Aunts,” Barbara said. “Dozens of them. She said some of them are there already, but I don’t think their English is so hot. Anyhow, she thought they’d be intimidated by the police, and we wouldn’t.”

“You wouldn’t,” Jimmy said. “They scare the shit out of me.”

He was exaggerating, but I felt the same. Barbara could get scrappy when a situation got past her very low indignation threshold. Jimmy always had to brace himself for flak. Not that she ever wanted to be rescued.

“Okay, that explains you two,” I said. “And you needed me to come along because?”

“If we can’t find a spot, someone’s got to stay with the car. I’m not about to double park in front of a building that’s crawling with cops.”

“Silly me,” I said. “I should have known.” Cars outnumber parking spaces by two to one anywhere in Manhattan.

We couldn’t have missed it. The police cars, lights flashing, gave it away. Jimmy slowed to a snail’s pace and started circling. The rain dumped another few thousand gallons of water on the car. I peered through the streams of water flowing down the side windows. Hydrant. Motorcycle. Dumpster.

“There.” The space, between a rugged SUV and a flashy pimpmobile, was tight. But Jimmy wiggled the car into it. Oh, good, I’d get to see the murder scene. And interact with the police. And, if I knew Barbara, get much more involved than I intended.

“Hand me my umbrella,” she ordered.

“Whoa, wait a minute,” I said. “Before we go up there and dive in the deep end, at least tell me this woman’s story. The condensed version.” Barbara on a roll could show the Ancient Mariner a thing or two.

“Frankie was a major druggie. He’d just gotten out of rehab.”

“I’m not sure,” Barbara said. “But he was not a nice guy. Abusive— well, she never had a black eye or a broken arm. She wouldn’t admit he ever touched her, but I bet he did. Anyhow, he was jealous and possessive. He snooped and bullied and played a lot of mind games.”

“And you couldn’t just tell her to throw the bum out.”

“Are you kidding? I’m a counselor, not Dear Abby. And an Al-Anon sponsor doesn’t tell you what to do. Besides, it wouldn’t have worked. She was totally hooked.”

“And he wouldn’t leave on his own?”

“Actually, he did,” Barbara said. “Repeatedly. Always in the middle of the night, after he’d gotten her all worked up.”

“Right,” Barbara said. “And a few days later, he’d waltz back in, swearing he’d change, and she’d believe that this time he meant it.”

Right. Pigs may fly. But first you have to go down to Kitty Hawk and build them some wings.

Jimmy locked the car doors. Hunching his shoulders against the rain, he marched up to the uniformed cop at the door to explain who we were. Barbara and I hung back, huddled under her umbrella. A persistent trickle of rain dripped down the points. Some of it landed down the back of my neck.

“Wait till you meet Luz,” Barbara said. “You’ll want to help her, I promise.”

“Barbara! Bruce!” Jimmy beckoned from the inadequate shelter of the stubby overhang above the front door. “Come on! We can go in.”

Barbara hurried toward him. I scuttled after her, trying to keep my head and shoulders under the functional part of the umbrella.

We followed the uniformed cop Jimmy had been talking to up a flight of stairs. Yellow crime scene tape barred the battered elevator door with its elderly brown paint job and graffiti scars. On the second floor, another uniformed cop stood guard beside a half-open apartment door. Our cop stuck his head in and said a few words. A minute later, Luz burst out the door. She was little, maybe five foot one or two. Cute, too, with bouncy black curls and dark brown eyes made brilliant by welling tears. The police towered over her. She flung herself on Barbara and burrowed into her embrace.

“Oh, Barbara, you came! Thank you, thank you. I’m so sorry I got you up, I wasn’t sure if I should call, but I didn’t know what to do. And Jimmy and your friend too, so late at night.” She had a hint of Puerto Rican accent, no more than a softening of the sibilants and lengthening of the short vowels.
Wassn’t. Jeemy
. She flashed the bright eyes at me briefly. “You are Bruce, yes? Thank you so much for coming.” To Barbara, she said, “I can’t believe he’s gone.”

She enveloped Luz like a down comforter. After a minute or two of rocking, Luz stopped heaving with sobs. She wiped mucus off her upper lip with a damp wad of crumpled tissues. She made as if to lead us into the apartment, still holding Barbara’s hand. The cop at the door stopped us.

“I’m sorry, miss, you can’t go back in right now. This apartment is a crime scene.”

“Then where—” Barbara began, already protective and belligerent. Jimmy’s reflexes were just as quick. He put a warning hand gently on her upper arm.

“It’s all right, Barbara,” Luz said. “We can go to the neighbor’s. Mrs. Hernandez, just down the hall. See, the open door? My aunts are already there.”

“That’s right, miss.” The cop nodded, approving. “You’ll all be more comfortable there.”

“But the detectives?” she asked. “They said they wanted to speak with me more.”

“They’ll come to you,” the cop said. “Detective Garcia and Detective O’Brien will come over to your neighbor’s when they’re ready.”

Luz led us down the hall. Mrs. Hernandez, resplendent in a quilted red satin bathrobe, flung the door wide as we approached. Her gold slippers were tipped with wads of fur, as if a couple of kittens crouched on her toes.

“Come in, come in,” she urged. “
Madre de Dios
, what a terrible thing.” She sounded as if she was thoroughly enjoying herself. “My
pobrecita
, come and sit with your
tias
.
Señora, señores
, welcome to my home. It is good this
niña
has
amigos
.”

She led Luz to the couch, where two pillowy aunts made room for her. She waved us toward an overstuffed armchair and a couple of kitchen chairs.

“I make you coffee,” she announced.

From the smell of it, she had already made it, and it was Puerto Rican coffee, Bustelo or one of those brands. That was fine with me. Alcoholics Anonymous floats on a sea of coffee, most of it a lot worse than I expected Mrs. Hernandez’s to be.

The aunts, buzzing like bumblebees, swarmed around Luz as soon as she sat down.

The matriarch with silver hair piled high like Madame de Pompadour was Tia Margarita, who held Luz’s hand. On her other side sat Tia Wanda. The rest of them were Tia Gloria, Tia Gladys, and Tia Maria. They all wept and wailed, exclaimed, and exhorted Luz to do a number of contradictory things at once. Lie down and rest and drink strong coffee. Have a good cry and pull herself together.

Jimmy and I accepted coffee, saying
gracias, muchas gracias
like good New Yorkers who had grown up half a mile south of Spanish Harlem. Barbara refused. She appreciated so much all the trouble Mrs. Hernandez had gone to, she would love to accept the coffee, but unfortunately she had a very bad
dolor
of her
estomago
, the doctor had strictly forbidden her to drink anything with
acido
in it. Barbara was too polite, or more likely, too codependent to decline merely because it would keep her awake all night. Jimmy whispered in my ear, “ ‘No’ is a complete sentence.” An Al-Anon slogan.

“Do you think I could go out in the hall and smoke?” I muttered to Jimmy. “It’s not like we’re actually doing anything.”