Read Deceived By the Others Online

Deceived By the Others 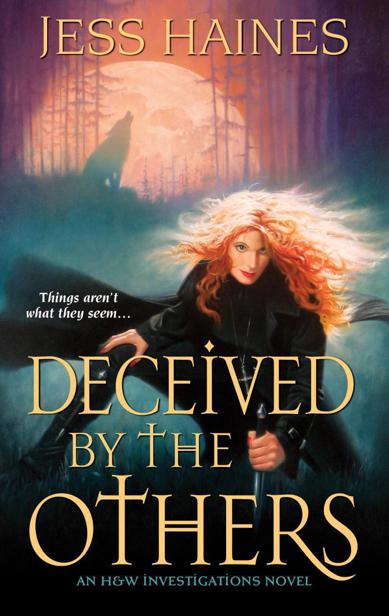 WHEN THE MOON IS FULL

The bass rumbling in Seth’s chest was unmistakably a threat, and I noted his eyes had shifted from a deep hazel into an amber color similar to my own. Sean and Dillon pulled me back to shield me from him, and I had to stand on tiptoe to see over their shoulders what happened next.

Between one blink and the next, Seth was shifting. He cried out a challenge before his human vocal cords were too changed by the shift to allow for speech, his last words trailing off into a long, drawn-out howl. “You’re dead! You’re all dead, unless you yield to me!”

I watched, fascinated, as Seth’s chest deepened and his arms grew thick with muscle. The crack of bone and sinew adjusting and reforming was sickening, but fortunately didn’t last very long since he’d forced a quick change. The fur that sprang out of his skin was a shade of deep brown a little darker than his hair, covering sleek muscles and a powerful frame that would rival Chaz for size if he had shifted, too. No wonder Seth thought he was badass. Still, size didn’t necessarily mean one had smarts or skill or experience, things Chaz had in abundance.

Seth wasn’t going full wolf either; he was assuming the half-and-half shape that he would be stuck in again tonight—just like the rest of the Weres—once the moon was full.

If he survived, that is….

HUNTED BY THE OTHERS

TAKEN BY THE OTHERS

DECEIVED BY THE OTHERS

DECEIVED BY THE OTHERS

David—I owe you a soda.

Ellen—you are, as always, awesome. Thank you so much for all your help!

Eve—thank you for “loaning” me Christoph. I promise not to abuse the privilege—too much.

My hands shook as I put my pen to the contract laid out before me. The
Notice of Mutual Consent to Human/Other Citizen Relationship and Contractual Binding Agreement
that would permanently cement my relationship with Chaz.

The pen left a streak behind when my hand jerked. I looked up, quickly shuffling some other papers over the contract to hide it amidst the clutter on my desk.

Jen, H&W’s receptionist and bookkeeper, peered into my office over the rims of her glasses. She eyed the papers like she knew I was hiding something, but was too tactful to say anything. “What was the name of that crazy guy who was here a month or so ago? The one you didn’t want to take calls or appointments from?”

I wrinkled my nose. “You’re talking about that tall, blond guy, right? His name is Jack.”

She nodded and disappeared around the corner. Curiosity piqued and the contract momentarily forgotten, I rose from my squeaky office chair to lean against the doorframe. Jen was on the phone, her feet propped up on her desk while she wrapped up a game of solitaire on the computer.

“No, sir, I just checked, and she’s in with a client. I’m sorry, but I’m not about to interrupt her meeting. Like I said, you can leave her a voice mail, or I can take a message.”

I frowned, folding my arms as I watched her multitask her game and the phone call. Jack’s calling wasn’t a good sign. The man was a member of the White Hats, one of those crazy vigilante groups who go around destroying any supernatural critters that cross their paths. The first time I’d met him, he’d threatened me at knife-point to attempt to get me to join his cause. The second time around, he had walked into my office in broad daylight and held a gun on me because he thought I was working for vampires. Aside from being a few beers short of a six-pack, he was bad news, pure and simple.

“Like I said,
sir,
she is not available.” Jen’s tone had turned professionally icy, and I strongly considered giving her a raise. She was doing an excellent job of putting off the pushy creep. “You’re free to leave a message with me or call back another time.” She paused, listened to his reply. Soon she was nodding along to whatever he was saying with a sly, triumphant smile. “Yes, I’ll see she gets it right away. What’s the message?”

Swinging her feet off the desk, she opened up an e-mail and clattered out Jack’s message. She saw me out of the corner of her eye and made a face, though she kept her voice cool and polite on the phone.

“Yes, I’ll get this to her as soon as she’s free. Thanks for calling Halloway and Waynest Investigations.”

“Thanks for getting rid of him,” I said as soon as she plunked the phone down. “That guy is nothing but trouble.”

“No kidding. I’ll forward the message since he left a phone number, but I don’t know if it’ll mean anything to you. All he said was, ‘tell her this time it isn’t us.’ Any idea what he’s talking about?”

Shaking her head, she turned back to her computer and sent me the e-mail, my preferred form of message. Sara was much more organized than I was when it came to keeping track of Post-it memos. My desk was a rattrap clutter of dust bunnies, chewed up pens, and scattered business cards that should’ve been filed away or organized somehow long ago.

“If he shows up here looking for me while I’m out of town, call the police. He’s a nuisance.”

“Okay,” she agreed, not bothering to look away from her game. Shrugging off my uneasiness, I turned back to my office, but she stopped me with another word. “Oh, Shia?”

“I almost forgot. Some guy named Alex or something left a message on the main voice mail for you last night. I forwarded it to your phone.”

I’d ignored my calls earlier so I could avoid any new emergencies getting piled on me before going out of town. Which Alex might have attempted to reach me before I left? Alex Mills, the insurance agent? No, he was out of town on vacation. Alex Temps, the client I tracked down a stolen antique for a couple weeks ago? No, no, he had bitched about my rates from start to finish and hadn’t been in the least grateful when I completed the job. He’d already paid, shortchanging me by a hundred and fifty bucks, the stingy bastard. I doubted I’d ever hear from him again. Who could it be?

Wait a minute. “Alex” calling me right around the same time as Jack the White Hat?

A Faerie's Secret (Creepy Hollow Book 4) by Rachel Morgan
The Rebuilding Year by Kaje Harper
Destined to Reign by Joseph Prince
Bindweed by Janis Harrison
Once and For All: An American Valor Novel by Cheryl Etchison
The Dialogue Thesaurus: A Fiction Writer's Sourcebook of Dialogue Tags and Phrases by Dahlia Evans
I Am Ozzy by Ozzy Osbourne;Chris Ayres
BY CHANCE NOT CHOICE: Marco's Choice - Moretti Brothers Series Book Two by Sage Young
Paris After the Liberation: 1944 - 1949 by Antony Beevor, Artemis Cooper
Dying to Know (A Detective Inspector Berenice Killick Mystery) by Alison Joseph
Our partner