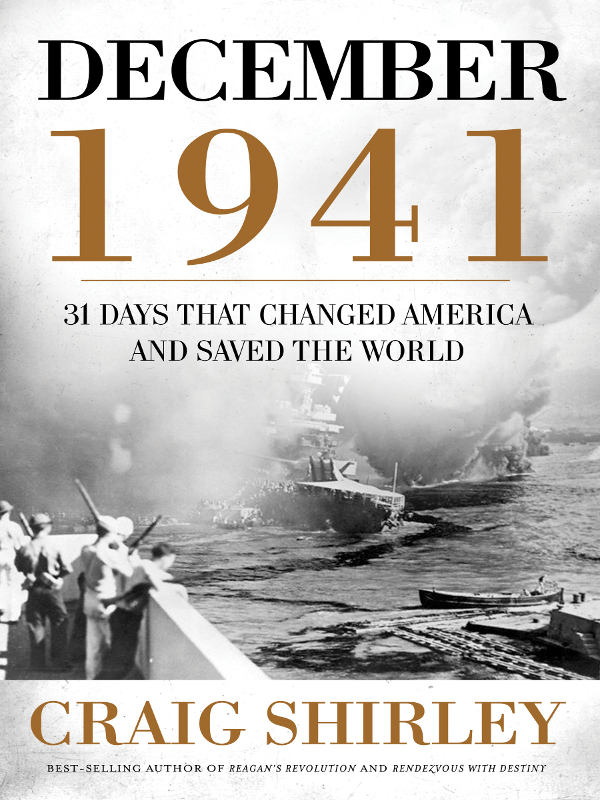 DECEMBER
1941
31 DAYS THAT CHANGED AMERICA
AND SAVED THE WORLD

Dedicated to family and friends who chose to serve . . .

CHAPTER 1: THE FIRST OF DECEMBER

CHAPTER 2: THE SECOND OF DECEMBER

CHAPTER 3: THE THIRD OF DECEMBER

CHAPTER 4: THE FOURTH OF DECEMBER

CHAPTER 5: THE FIFTH OF DECEMBER

CHAPTER 6: THE SIXTH OF DECEMBER

CHAPTER 7: THE SEVENTH OF DECEMBER

CHAPTER 8: THE EIGHTH OF DECEMBER

CHAPTER 9: THE NINTH OF DECEMBER

CHAPTER 10: THE TENTH OF DECEMBER

CHAPTER 11: THE ELEVENTH OF DECEMBER

CHAPTER 12: THE TWELFTH OF DECEMBER

CHAPTER 13: THE THIRTEENTH OF DECEMBER

CHAPTER 14: THE FOURTEENTH OF DECEMBER

CHAPTER 15: THE FIFTEENTH OF DECEMBER

CHAPTER 16: THE SIXTEENTH OF DECEMBER

CHAPTER 17: THE SEVENTEENTH OF DECEMBER

CHAPTER 18: THE EIGHTEENTH OF DECEMBER

CHAPTER 19: THE NINETEENTH OF DECEMBER

CHAPTER 20: THE TWENTIETH OF DECEMBER

CHAPTER 21: THE TWENTY-FIRST OF DECEMBER

CHAPTER 22: THE TWENTY-SECOND OF DECEMBER

CHAPTER 23: THE TWENTY-THIRD OF DECEMBER

CHAPTER 24: THE TWENTY-FOURTH OF DECEMBER

CHAPTER 25: THE TWENTY-FIFTH OF DECEMBER

CHAPTER 26: THE TWENTY-SIXTH OF DECEMBER

CHAPTER 27: THE TWENTY-SEVENTH OF DECEMBER

CHAPTER 28: THE TWENTY-EIGHTH OF DECEMBER

CHAPTER 29: THE TWENTY-NINTH OF DECEMBER

CHAPTER 30: THE THIRTIETH OF DECEMBER

CHAPTER 31: THE THIRTY-FIRST OF DECEMBER

The U.S.O. was created in 1941, as was the comic book character, “Captain America.” The first time an organ was played at a baseball game was in Chicago in 1941, and the first television commercial aired was in 1941 to tout Bulova Watches. The “Red Ryder” BB gun was also first introduced.

In 1941, the United States of America went to war with the Axis Powers including Japan, Germany, and Italy, changing America radically and forever.

Just three days before the December 7
th
attack, President Franklin Roosevelt received a long memorandum marked “Confidential” from the Office of Naval Intelligence, reviewing in detail all the subversive activities going on in America, including those emanating from the Japanese Embassy in Washington. “The focal point of the Japanese Espionage effort is the determination of the total strength of the United States. In anticipation of possible open conflict with this country, Japan is vigorously utilizing every available agency to secure military, naval and commercial information, paying particular attention to the West Coast, the Panama Canal and the Territory of Hawaii.”
1
The 26-page document went into great detail about the coordination between German and Japanese agents on U.S. soil. The secret paper also reviewed the attempts by the Japanese to infiltrate labor unions, Latin American groups and the National Association for the Advancement of Colored People.
2

A second reference specifically to the Hawaiian Territory was made in the memo. “However, only the more important groups are of interest, since they are in a position to engage in espionage, sabotage and other acts inimical to the best interests of the U.S . . . . Each of these groups is at least strongly influenced if not directly controlled by similar ones in Japan.”
3
The confidential document prepared for Roosevelt went into great detail regarding the Japanese civilian presence in Hawaii.

The response by the U.S. military, government, and citizenry to the events of December 7 was quick and decisive, even if it was also often bumbling and haphazard. “Everyone, I suppose, will be jotting down in a little black book somewhere the memories of Sunday, December 7âwhere they were, what they were doing, what they thought when they first heard of the war. Let me tell youâyou don't have to make a note of those things. You'll remember them.” So wrote famed sports columnist Bill Henry in his “By the Way” column in the
Los Angeles Times
on December 9.
4
This was true enough, but the entire thirty-one days of December 1941 were memorable, messy, historic, poignant, confusing, inspiring, depressing, and enduring.

After December 7, 1941, the policies towards the Japanese, Germans and Italians living in America were harsh and comprehensive but, because the government believed the Germans, and the Japanese had incredible spy and sabotage networks operating in the United States and the Hawaiian Territory, the reaction by the government at the time, they felt, was justified.

At the end of December 1941, Americans still weren't calling it “World War II” or the “Second World War,” though there were hints of the standard appellations to come. Even three weeks after America's entry into the global crisis, Americans were still calling it the “national emergency” or “the war.” I didn't learn many of these and thousands of other things just from researching books during the development stages of
December 1941
; I learned many of these facts from the newspapers, magazines and other publications of the era as well.

Washington Post
publisher Phil Graham once said, newspapers were “the first rough draft of history.” The phrase had been attributed to others before Graham, but he gets the credit for it.
5
So much of the sourcing for this book comes from hundreds of newspapers and thousands upon thousands of newspaper and magazine articles around the country and wire service bulletins and radio dispatches and short-wave intercepts sifted through to build the following account. But private diaries, personal papers, and confidential and classified materials were also heavily relied upon for this story.

There never had been a book solely devoted to the month of December 1941, surely one of the most important and decisive and nation-altering thirty-one days in the history of the American Republic. There have been days such as July 4, 1776; October 19, 1781; September 17, 1787; and April 15, 1861, that rank with December 7, but one is hard-pressed to think of another month as startling, compelling, interesting, critical, and inspiring as December 1941.

There have been many outstanding books written on World War II and the events leading up to Pearl Harbor, but never has there been a book about the days in America prior to December 7, 1941, and what happened to the country in the hours, days, and weeks after the attack. Suffice it to say, the country was radically changed forever.

Never before or since has America been so unified. There were virtually no Americans against their country getting into World War II after the unprovoked attack by the Japanese at Pearl Harbor. One of the few was Congresswoman Jeannette Rankin, Republican of Montana. She voted against declaring war on Japan and would only vote “present” when FDR asked Congress for a declaration of war against Germany and Italyâafter they had declared war on America. Someday someone will write a book about Ms. Rankin, exploring her reasons for not voting for war. They were principled, nuanced, and commendable. She was mistaken but she wasn't wrong.
6

Lending a Paw: A Bookmobile Cat Mystery (Bookmobile Cat Mysteries) by Cass, Laurie
Human Extinction Level Loss (Book 3): Liberation by McClimon, Philip A.
The Autoimmune Epidemic: Bodies Gone Haywire in a World Out of Balance--and the Cutting-Edge Science that Promises Hope (No Series) by Nakazawa, Donna Jackson
Illumination by Matthew Plampin
A Box of Nothing by Peter Dickinson
Full Circle (Avalon: Web of Magic #12) by Rachel Roberts
Mercy Street by Mariah Stewart
In Her Shadow by Boyle, Sally Beth
Good-bye Marianne by Irene N.Watts
A Journey to the End of the Millennium by A.B. Yehoshua
Our partner