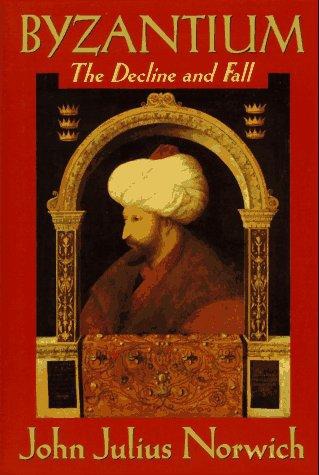 Third volume in the series.

The Decline and Fall

Copyright © John Julius Norwich,
1995
The moral right of the author has been asserted

All rights reserved. Without limiting the rights under copyright reserved above, no part of this publication may
be reproduced, stored in or introduced into a retrieval system, or transmitted, in any form or by any means (electronic, mechanical, photocopying, recording or otherwise), without the prior written permission of both the copyright owner and the above publisher of this book

A Note on Names and Transliteration
xxxvii

My thanks, as always, to the staff of the London Library, without whose unfailing help and sympathy this book and its two predecessors could never have been written. I also owe a particular debt of gratitude to Judith Flanders, for her eagle eye, computer memory and flawless ear for the rhythm of language; and to Douglas Matthews, for compiling yet another immaculate index.

It was on the day or rather the night of the
27th
of June
1787,
between the hours of eleven and twelve that I wrote the last lines of the last page in a summerhouse in my garden. After laying down my pen, I took several turns in a
berceau
or covered walk of Acacias which commands a prospect of the country, the lake and the mountains. The air was temperate, the sky was serene; the silver orb of the moon was reflected from the waters, and all Nature was silent. I will not dissemble the first emotions of joy on the recovery of my freedom and perhaps the establishment of my fame. But my pride was soon humbled, and a sober melancholy was spread over my mind by the idea that I had taken my everlasting leave of an old and agreeable companion, and that, whatsoever might be the future date of my history, the life of the historian must be short and precarious.

So wrote Edward Gibbon, describing the moment when he finally completed
The History of the Decline and Fall of the Roman Empire.
Let no one think that I should dream of comparing my own modest attempt to tell the story of Byzantium with the greatest historical masterpiece of English literature; but it happens that after I typed the final full stop to this trilogy, at precisely 11.30 on a sultry July evening, I too walked out alone into a moonlit garden. And though I cannot pretend that my view was as spectacular as Gibbon's - or that I ever contemplated the establishment of my fame - I found that I could share at least one of the emotions that he describes. Now that my work is done I too feel that I am saying goodbye to an old and valued friend.

The first part of this trilogy told the story of the Empire of Byzantium from its foundation by the Emperor Constantine the Great on Monday, 12 May 330
ad
, to the establishment of its imperial Christian rival, the Holy Roman Empire, with the coronation of Charlemagne on Christmas Day, 800. The second followed its fortunes through the dazzling dynasty of the Macedonians to the apogee of its power under the terrible Basil II
Bulgaroctonus,
the Bulgar-Slayer, but ended on a note of ill omen: the first
of the three great defeats of Byzantine history, suffered at the hands of the Seljuk Turks at Manzikert in 1071. This third and last volume shows just how fateful that defeat was to be, robbing the Empire of most of Asia Minor - the principal source of its manpower - weakening it and impoverishing it to the point where, rather more than a century later, it was powerless to resist the onslaught of the Fourth Crusade. The fifty-six years of Latin rule that followed, ending with the triumphant return of Michael VIII Palaeologus, seem at first sight to have been little more than an unedifying interlude; in fact they proved to be the second blow from which Byzantium never recovered. The story of the Empire's last two centuries, seen against the background of the growing power of the Turkish House of Othman, is one of helpless decline and makes, I fear, occasionally painful reading. Only the final chapter, tragic as it is, once again lifts the spirit — as all tales of heroism must inevitably do.

In the Introduction to the first of these volumes I mentioned how forcibly I had been struck by the difference, from the point of view of a writer, between the history of the Byzantine Empire and that of the previous object of my attention, the Republic of Venice. As the centuries pass, these two histories become ever more intertwined, both before and after the tragedy of 1204
-5,
with the Serenissima becoming guilty of what might almost be described as a second betrayal - this time by apathy - in the final years of the Empire's existence; and it consequently seems worth while to press the comparison a little further. At first glance, the two have much in common. Venice was after all the child of Byzantium, and spent her formative years as a Byzantine colony, with all her early cultural influences coming directly from Constantinople. Both mother and daughter were of such beauty and opulence as to become legends — fabled across the world as cities of marble and malachite and porphyry, reputations so near the truth that many, seeing them for the first time, declared in amazement that the half had not been told them. Both endured for well over a thousand years - a period comfortably longer than that which separates us from William the Conqueror. Both, on occasion, wielded immense political power, and gained for themselves sinister reputations - deserved or not — for cruelty, duplicity and intrigue. Finally, both lasted too long and were obliged to suffer a slow and humiliating decline.

But there the similarities end. Venice was a republic, and although technically an oligarchy was in fact a good deal more democratic than any other nation - with the arguable exception of Switzerland - in the world; God-fearing in her way, she was throughout her history resolutely opposed to any interference of the Church in her internal affairs, braving more than one papal interdict in consequence. Byzantium was somewhere between an autocracy and a theocracy, absolute power being vested in an Emperor who was himself the representative of the godhead on earth
- isapostolos,
the Equal of the Apostl
es. Venice was materialistic, hard-faced, down-to-earth; Byzantium was the most spiritually-orientated temporal state the Christian world has ever known, the Holy See not excluded. Venice, set amid the still, shallow waters of her lagoon, enjoyed a physical security unique in continental Europe; Constantinople lived under almost perpetual threat of attack. In her last, sad centuries, Venice gave herself over to the pursuit of pleasure and a degree of mild debauchery, finally surrendering to the young Napoleon in the most humiliating circumstances conceivable, firing not a single shot in her own defence. Byzantium, on the other hand, kept her soul intact. Three times in the last two hundred years, her Emperors sought to buy security by submitting her Church to Rome; but the people of Constantinople never wavered from their ancient and traditional faith. And when their time came they fought to the end for fifty-five desperate days, ten thousand against a quarter of a million, their last Empe
ror dying heroically on the battl
ements as the city's defences, so long believed impregnable, finally collapsed around him.

Readers of the first two volumes of this history will not need to be reminded that it is in no sense a scholarly work. The four years of ancient Greek that constituted an important part of my public-school education have not enabled me to read the simplest of Greek texts without a lexico
n at my elbow; I have consequentl
y been forced to rely almost entirely on those authorities of whose work there exist either translations or summaries in secondary sources. This has in fact been less of a hindrance than I expected; particularly for the centuries covered by this present volume, these secondary sources are so copious that the difficulty has been less one of obtaining information than of selecting it. Besides, the need to cover a period of nearly twelve hundred years -since for the sake of clarity the curtain must rise some time before the Empire really begins and for that of tidiness it must fall a few years after it ends - in roughly as many pages means that at all costs the story has to be kept moving, and I make no pretence of doing anything more than skating over the surface of my subject — an activity which is, by its very definition, the negation of scholarship.

But I am unrepentant. My aim has never been to cast new light on history. Since the day I put pen to paper, I have had two purposes only in mind. The first has been to make some small amends for that centuries-old conspiracy of silence that I remarked upon in the Introduction to the first volume: a conspiracy thanks to which countless generations of Western Europeans have passed through our various educational systems with virtually no knowledge of the longest-lived - and, perhaps, the most continuously inspired - Christian Empire in the history of the world. The second has been quite simply to tell a good story, as interestingly and as accurately as I can, to the non-specialized reader. I cannot hope that that reader, having reached the end of this final volume, will lay it down with the same regret that I feel on the completion of a long yet wholly enjoyable task; but he will, I trust, at least agree with me that the tale was worth the telling.

A Note on Names and Transliteration

Consistency has always seemed to me a greatly overrated virtue, and I have made little or no effort to preserve it where the spelling of proper names is concerned. In general I have preferred the Latin versions to the Greek - Thessalonica for Thessaloniki, Palaeologus for Palaiologos, etc. - on the grounds that they will probably be more familiar to English readers. Where the Greek spelling has seemed more suitable, however, I have not hesitated to use it.

I have found the Turkish undotted i (1) beyond me - not only because I speak no Turkish, but also because English readers almost invariably blame the publishers for defective type. I hope my Turkish friends will also forgive me for referring to Constantinople throughout, rather than Istanbul. As Sir Steven Runciman once wrote in a similar context, it would have been pedantic to do otherwise.