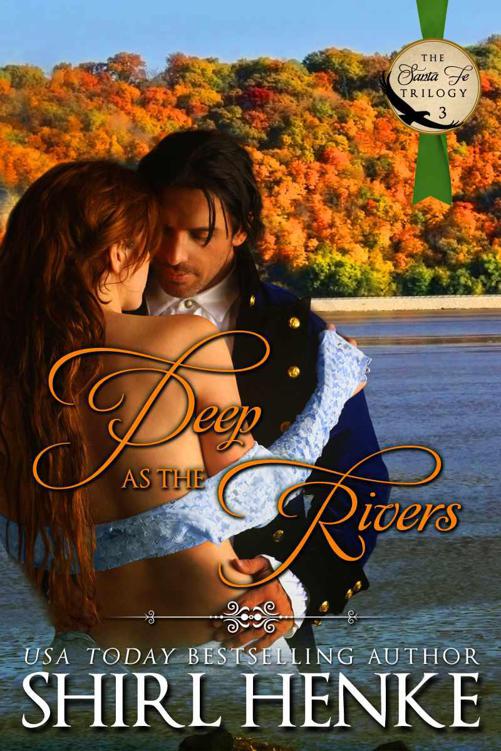 DEEP AS THE RIVERS

All rights reserved. No part of this ebook may be reproduced in any form or by any electronic means without the written permission of the publisher.

A FIRE IN THE BLOOD

LOVE A REBEL…LOVE A ROGUE

DEEP AS THE RIVERS

“Billie Jo and the Valentine Crow”

Even God dare not cross the Mississippi

Colonel Samuel Sheridan Shelby finished off the dregs of his brandy and peered at himself in the Girandole looking glass hanging over the mantel. It felt odd to be in uniform again. He ran his fingers through long, shaggy black hair. It wanted barbering. Tish would be upset, saying he looked more like a backwoods ruffian than an officer of the United States Army, but since returning from his mission this morning, he had little time for the niceties of civilization. He had spent the afternoon meeting with President Madison and his secretary of war, William Eustis. Shelby rubbed his eyes tiredly and blinked, girding himself for the ugly scene to come.

“Perhaps if we’d had children, things might have been better,” he mused aloud, taking a sip of brandy as he paced across the Aubusson carpet that graced the drawing room of his Washington home.

Leticia had conceived within the first months of their marriage but lost the babe shortly thereafter. Now Samuel strongly suspected she had taken an abortifacient to rid herself of the unwanted burden. As soon as President Jefferson had sent word to him about the miscarriage, he had rushed home from his assignment in Canada to find her holding court from her bedchamber.

Richard Bullock had been at her side, of course. Her stepbrother had glared at him hostilely, as if getting a child on his own wife made Samuel responsible for the miscarriage. Leticia had looked amazingly well in spite of the ordeal, with silver gilt ringlets artfully coiled about her shoulders and the blush of excited laughter staining her ivory cheeks. All traces of merriment had been instantly erased as she reached out to him with a theatrical sob while her huge amber eyes filled with tears.

When Richard had ushered the other callers from the room, she had clung to Samuel saying that she could not bear the pain and the loss, that she never wanted to carry another child beneath her heart. At the time he had ascribed her outburst to the ordeal she’d just suffered, but as the months stretched into years, Tish had kept her resolve. He’d found the sponges and the vial of pungent liquid in which she soaked them and knew she employed them to prevent conception.

After several years of marriage, Samuel became grateful that he had never succeeded in giving her a baby. A child would only be a pawn she could use to manipulate him, a victim of its parents’ stark enmity.

Tish was at her dressmakers, being outfitted for the ball at Senator Downey’s tonight. She never missed a Washington gala, with or without him. Richard was always her escort in her husband’s absence. Because they had been raised as brother and sister, no one remarked on it. Tish would never do anything to cause gossip. Grimly, he anticipated her rage when he confronted her.

As he had ridden through the sweltering humidity of the swampy Florida backcountry, he had mulled over what to do about the shambles of his life, as Elkhanah Shelby had done a generation earlier. But his father had been blessed enough to have his impossible French wife quietly leave him and return to Paris. Would that Tish might give up so easily. Samuel knew she never would. There would be tears and temper tantrums, threats and thrown hairbrushes. He laughed mirthlessly, thinking of how he had believed he could avoid the volatile temper of his mother by choosing a gently reared daughter of the Virginia aristocracy for a wife. Leticia Annabelle Soames had seemed so demure and malleable when they met.

Sighing for past mistakes would avail nothing. Neither would getting coshed, he thought with disgust, firmly replacing the stopper on the crystal brandy decanter. Bleakly he looked down at the faceted crystal glittering in his hand. Waterford, imported by Tish’s father all the way from Ireland. Much of the beautifully appointed mahogany furniture had been shipped from the workshop of Duncan Phyfe in New York. The whole lavish house had been bought and paid for with Soames money.

“God save me from rich women,” he muttered as the clatter of horses’ hooves sounded in the courtyard outside: Tish returning from her dressmaker, with Richard carrying her finery in a tower of beribboned boxes. Their laughter echoed from the foyer where a tall case clock struck the hour. Then he heard Tobias say, “Mastah Samuel’s returned, mistress. He’s in the parlor.”

After a flurry of leave-taking from Richard, Tish opened the door and swept into the room. No one had perfected the art of the grand entry more impressively than Leticia Soames Shelby, not even the incomparable Dolley Madison. Tish’s amber eyes flashed as they glided over him from head to foot and back. She stood poised just inside the door with one small beringed hand at her slender white throat. Pale golden curls were piled high on her head, peeping out from the brim of the ruby silk bonnet which matched her day gown of rich velvet trimmed with jet buttons.

“I...I didn’t expect you for several weeks, Samuel darling,” she said coolly as she took rapid inventory of his dress uniform and unattended hair while deftly removing her bonnet and fluffing her own gleaming curls.

“The situation in British Florida heated up unexpectedly. I had to report to the president.”

“Will there be war then?” she inquired, swishing over to press her lips to his, then tilting her head up to gaze measuringly at his expression.

He looked down at her with a cynical gleam in his eyes. “You don’t give a damn if the United States goes to war against Britain—or Napoleon’s whole bloody army.”

“No, but I do see the opportunities for a colonel to become a general if he applies for the right duty assignment during the conflict and distinguishes himself,” she said, brushing a speck of lint from the shoulder of his uniform with wifely propriety.

He removed her hand firmly. “We’ve had this conversation a thousand times, Tish. It avails us nothing.” His voice was level and cold.

She snatched her hand away and stamped her foot. “Only because you’re too stubborn to see the future! Don’t you realize with a few military honors to your credit my father could pass along his senate seat to you—even place you in the White House? Your family name and mine combined are unbeatable—Virginia’s finest, far better than that paltry Madison’s with his Philadelphia Quaker for a wife. She’s a nobody.”

“That ‘nobody’ is the most brilliant hostess and beloved lady in the nation. You’ll never supplant her,” Samuel said sharply.

“Only because you insist on skulking around out of uniform like a common criminal, doing the dirty work for Jefferson and Madison while they get all the glory!”

“There’s little enough glory in being president and more than enough grief. I serve my country best doing what I’ve become good at, which is not a topic open for further debate, Tish.”

Sensing his tightly leashed anger and seeing the darkening glitter in his eyes, Tish decided to change tactics. She swayed closer to him, lowering her lashes and nuzzling her lips against his throat as she embraced him. “Don’t let us quarrel on your first night home, darling. I’m every so sorry I was cross.” She brushed her full breasts against his chest, then turned quickly away and began to unfasten the long row of jet buttons on her gown, revealing the milky white smoothness of her skin. “Lock the parlor door, Samuel,” she said in a husky voice. “We have not done this in far, far too long.”

“No. It’s no good, Tish.” He turned away from her and stared out the floor-length window at the stark outlines of the “wilderness capital” as European wags had dubbed the District of Columbia. Rows of two- and three-story brick houses were scattered helter-skelter across the tidal basin swampland, sitting between tangles of elderberry bushes and quack grass. Tree stumps stood up in bare clusters like ugly gashes, raw and new as the city itself.

Tish came up soundlessly behind him and looked at the silhouette of the Senate and House of Congress which dominated the north shore of the Potomac. The pale buff stone building that housed the president was visible from the opposite side of their home. She could picture the White House in her mind’s eye as she slipped her dress from her shoulders and let it fall to the carpet. “I’ve been thinking of you, Samuel...missing you, darling.” Her voice wheedled as she tugged playfully at his arm, turning him to face her. She wore a French lace corset that pushed her large breasts up to overflow across the top in bounteous splendor. Their rigid nipples were visible through the sheer pink silk of her camisole.

He stood in amazement as she reached up and began to unfasten the buttons on his uniform. “You’re incredible, you know, really incredible. The day I left for Florida you were screaming like a fishwife that you hoped the Seminoles would cut my throat or the British would stand me against a wall and shoot me. You’ve banned me from your bed for nearly two years, and now you try to seduce me as if nothing at all were amiss. Such a loving wife.” He tsked in mock irony.

“No matter what else is between us, you always liked it well enough in bed, Samuel,” she said with a pout, undeterred.

“So I did, Tish,” he replied with a self-deprecating chuckle. “But a man has to stop thinking with what’s between his legs sooner or later.”

“Don’t be vulgar, Samuel,” she snapped back, suddenly reverting to the role of haughty Virginia belle, a pose difficult to maintain while standing half-dressed in front of the parlor window.

“We have to talk, my dear...seriously. I suggest you slip back into that fetching little frock and have a seat. I’ll pour us a drink. I think before this is done we’ll both need it.”