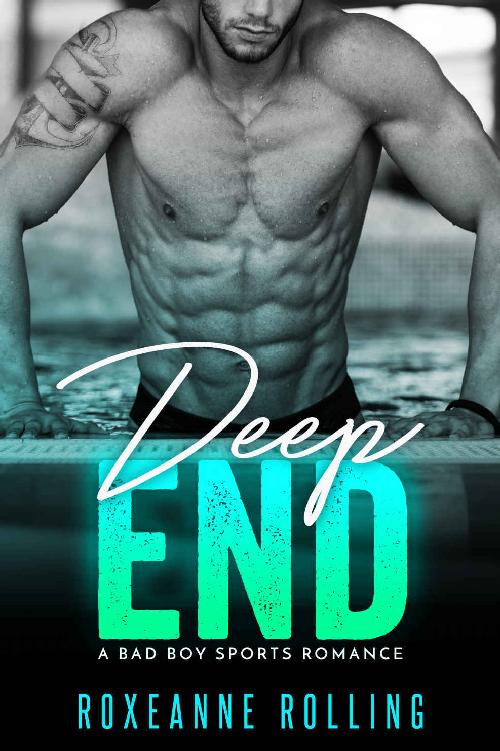 ALL RIGHTS RESERVED BY AUTHOR

All characters appearing in this book are fictitious. Any resemblance to real persons living or dead is not intended and is purely coincidental.

All character
s
in this book are over the age of 18.

No part of this book may be reproduced, re-sold, or transmitted electronically or otherwise, without express written permission from t
he author
.

“Hey Anchor, check her out!” c
ries Dave, my best swimming bro, pointing at some chick. But that wasn’t anything new. Dave is always pointing out chicks. I don’t have to look as hard
for them
myself. I like to let them come to me. And, in the end, I’m the
one who gets the chicks Dave points out. They can’t resist me. What can I say?

They call
me Anchor for two reasons. One:
I’m the anchor on our college relay team. I’m also the captain of the team, and have been the captain since I was a sophomore, far earlier than anyone else
ever has been
.
No matter how many beers I’ve had the night before, I always pull the team to victory, no matter how far behind we are.
Two:
when I’m in my swim briefs
, my package is so big it weighs me down like an anchor. But I always win even so.

She’s hot. I have to give Dave credit. He has excellent taste. His problem is that he can’t always get the girls.

“How you doing, honey?” says Dave, jumping off the statue and landing right in her path. She’s just minding her own business, walking across campus.
She’s hot, in a nerdy, shy kind of way. It’s like she doesn’t know how hot she is. She’s wearing a skirt that shows off her legs just enough, though. And she’s stacked. That’s just the way I like them.

“Excuse me,” she says, trying to step around Dave. She’s carrying a shoulder bag that’s so full of book
s
it looks
like she might tip over from it
s weight.

“Why don’t you come party with us, baby?” says Dave, stepping in front of her again.

“No
,
thanks,” she says, finally looking at Dave.
Her eyes widen at the sight of him. That’s completely understandable. After all, he’
s wea
ring nothing but swim briefs
. His body is still dripping wet. We’ve just been in the pool. I picked the lock so that we could get in, because we’re not supposed to be in there after all, and we’re definitely not supposed to be partying there.

I’m up on the statue. Dave and I climbed all the way up to the top. I’m sitting, perched on top of this statue’s head. It’
s just a statue of some
old dude, a campus founder or something. Hell if I know who he is. When we were drinking earlier in the pool, I thought it’d be a good idea to steal the statue. I don’t know how the idea came into my head, but it just did. I’m always getting thes
e crazy, wild ideas, usually inv
olving something illegal.
After all, I
doubt
the school administration
, or my swim coach, would look s
o fondly on us stealing the school’s main statue. It’s right in the middle of the Quad, in front of the library.

“You been studying all night or something, baby?” says Dave, as he tilts his beer can far back, draining the last of his beer. “I can show you how to relax a little bit. Come back to the swim house
with me
, and I promise I’ll show
you a good time.”

From the top of the statue, I just laugh. Dave’s attempts at getting girls rarely fail to make me chuckle.
I’d like to say he means well, but that isn’t true either.
He just wants a fuck.

“What the hell
are
you laughing at, Anchor? You think it’s funny that I invited her back to our place?”

Dave tends to get angry really quickly. I don’t think he’s very secure about his ability with
girls, and anyone questioning his ability
is likely to wind up fighting him
.
Since we’re real bros, we don’t
fight much. But there’s been a time or two when I’ve had to knock him the fuck out. What can I say?

“Leave you alone? What? You’re too
good
for me
,
or something? Look, just because you got all those
books and all I got is swim briefs
and an empty beer…well…”

But
Dave’s still standing in front of her, blocking her path
. She tries to
step
around him again, but he steps in front of her again. He’s being a real dick. And it pisses me off. He did his thing. He said his line. He tried his best, and it wasn’t good enough. It’s time for him to move on and let her go.

“Just let her go home, man. She’s tired, and you’re
being
kind of a dick.”

“What’d you call me?” says Dave, growing even angrier.

“I called you a dick,” I say, loud and clear. “Because that’s
what you’re being.” I turn my h
ead toward the girl, taking another drink from my beer as I do so. I’m pretty buzzed, but I still have my wits about me, unlike Dave, apparently. He never could hold his booze well. “Sorry about this,” I say. “He’s a nice guy at heart, but he can be like this when he’s drunk. He can’t hold his alcohol well.”

The girl doesn’t say anything. But she gives me some kind of special look… I don’t know exactly what it means. She’s not saying, “Come, fuck me now.
You’re
the man for me.” She’s ce
rtainly not saying that. I don’t
think she’s looking at me with the same disgust that she’s looking at Dave with
,
either, though.

“Come down from there, you asshole,” says Dave, putting up his fists, and throwing down his empty beer can, crushing it beneath his foot.

I jump down from the top of the statue in a single swift motion, landing
agilely
on my feet. Despite being buzzed, my muscles feel light, limber, and strong.
“You want to go?” I say.

“I’m going to get out of here,” says the girl, giving me one last look.

“Don’t talk to
her like that,” I say. I don’t
even know her. I don’t quite know why I’m defending her so much.

“Don’t act like
you’re
any better than he is,” says the girl, turning
to me,
her
expression turning nasty. “You’re just another jock like he is. I don’t
have much patience for
types
like you. You’re what, going to fight him, to try to impress me?”

She gives me the nastiest look imaginable, f
ar
worse
than the one she gave Dave. Then she disappears, marching off, not giving us another look.

Dave’s still mad though, practically frothing at the mouth. “Dude, you totally screwed me there. I had that.”

“You
weren’t
even close, bro. She hates you almost as much as she hates me.”

“Why do you always have to cock block me like that? Just because you’re the captain, you think you should have all the girls? Just cause
you’re
the fastest, and you’re headed to the Olympics?”

I can’t help it. It sounds too much like a compliment, and I smile, despite myself.
“I’m not yet on the team,” I say, but I know it doesn’t sound the least bit modest. “Yet” really changes the meaning of the s
en
tence
. But, after all, I am pretty sure I’m going to make the team. That might even be an understatement.

“I’m going to knock that shit-eating grin off
your
face,” says Dave, rushing at me, his right arm swinging.

I step aside nimbly, dodging
Dave’s punch with ease.

He goes tumbling past me. I can’t help it, and
I
stick out my foot, tripping him.

He falls flat on his face.

Shit, is he knocked out?

We have a meet coming up, and coach is going to
kill me if Dave’s too hurt to r
ace.

“Dave!” I say, bending down and shaking him.

“
Ghurgly
burb,” says Dave,
groggily, not making any sense,
as I pull on his body, getting him so that he’s lying on his back, rather than face down.

“Wake up, asshole,” I say
, shaking Dave, and giving him a little slap on the face. “We’ve got a meet coming up. You can’t be passed out on the fucking quad.”

I shake my head, holding back a smile. “You came at me, and
you tripped
over your beer can. I didn’t move a muscle, honest to God.”

“You swear you
d
id
n’t
touch me?” says Dave, giving me a q
uizzical look, like he doesn’t
believe me.

“Swear to God,” I say, helping him to his feet.

He shakes his head like a wet dog. He looks pretty bad, but I’m hoping that in the morning he’s not going to ha
v
e any visible bruises that coach will be able to see.

“You look great,”
I say, l
ooking right into his blood-sho
t eyes, and his drunk-ass blotchy face. “What do you say we polish off a couple more
beers, and finally get to work on this statue?”

“You still want to steal the statue?” says Dave. He looks…
submissive
. That’s the only way I can explain it. I know he’s tired and hurting. Figu
ring out how to somehow cut down and haul away a massive stone statue is the last thing he wants to do. Who the hell knows how much this statue weighs?
But he’ll do it for me.