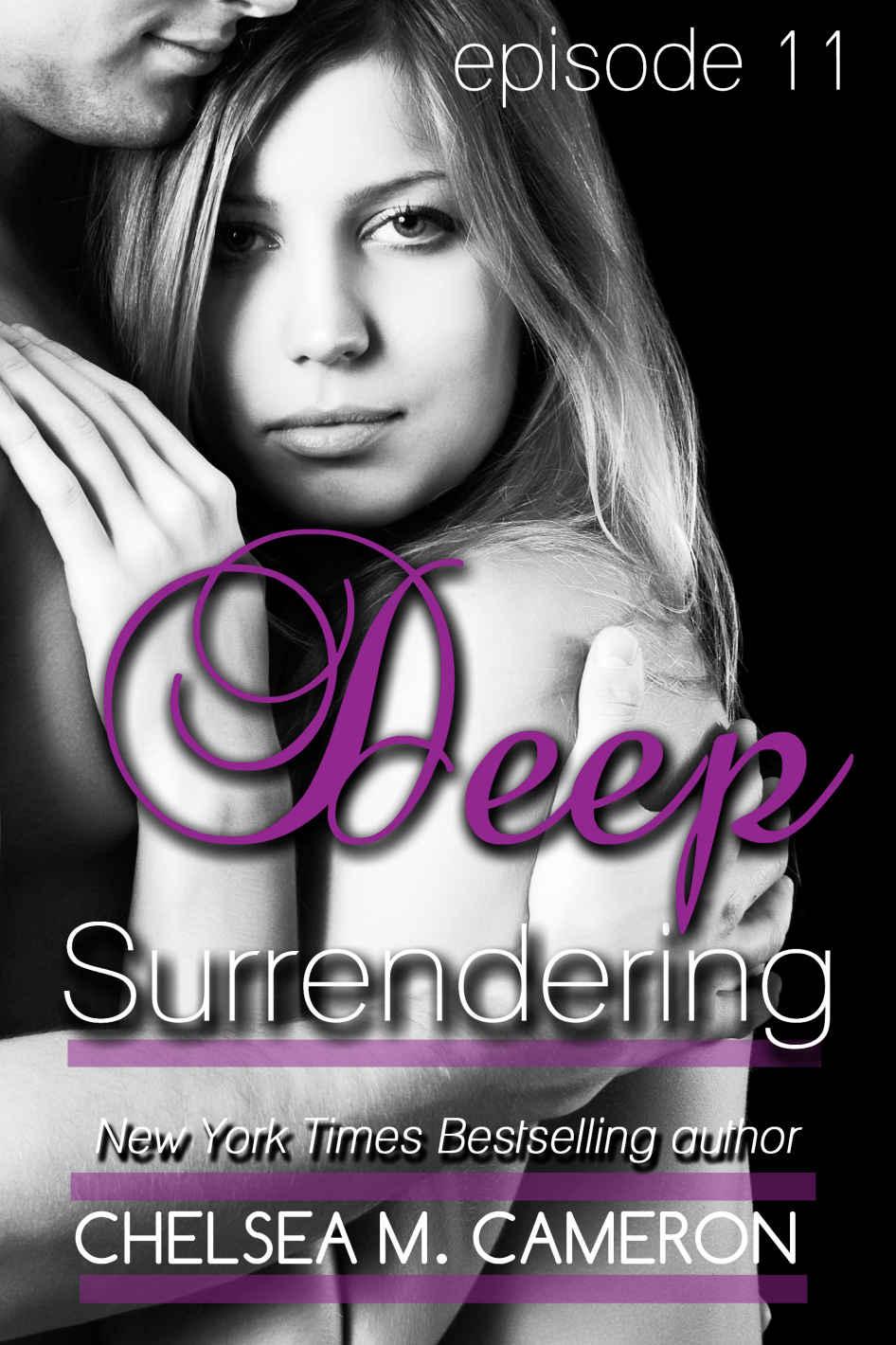 This is a work of fiction. Names, characters, places and incidents are either the product of the author’s imagination or are use fictitiously. Any resemblance to actual persons, living or dead, events, business establishments or locales is entirely coincidental.

No part of this book may be reproduced, scanned or distributed in any printed or electronic form without permission. All rights reserved.

“So, what happens now?” I asked as Fin filled a bowl with soup and pushed it across the counter at me. “I mean, with us.” It was hard not to jump up and throw my arms around him and hold him to make sure he was still here and he was still real. I’d thought about this moment for so long, but I never thought it was actually going to happen.

Fin sighed and got a bowl of soup for himself and then sat on the stool next to me. He folded his arms and stared into his soup.

“That’s a good question that I think we’re going to have to talk a lot about. I know what I want, but I need to know what you want.” Him. I obviously wanted him, but could we make this work? Technically, we hadn’t even truly dated. We knew how to have sex, that’s for sure, but could we do the day-to-day? The dates and the phone calls and dealing with stupid things. And in the larger picture, where would this go? Marriage? Children? Laundry and bills and joint tax returns?

“Okay,” I said, blowing on a spoonful of soup so I didn’t burn my mouth, “what do you want?” He looked up from the bowl and his eyes blazed into mine. His hair was still a little damp and I couldn’t stop myself from touching it.

“You know what I want, Marisol. I wouldn’t have told you I loved you if I was going to bail. You are… You are the most incredible woman I’ve ever met. You’ve taught me so much about myself, about love, about truly accepting another person. You’re so good and so right and I want to be good and right for you. I just want you. I need you. I don’t want to lose you. Ever. I know I sent you that letter saying I was letting you go, but… I can’t now.” Tears pricked at the corners of my eyes. He’d said wonderful things before, but this on top of telling me he loved me was just too much.

I ducked my head to hide my tears.

“I don’t want to lose you either,” I whispered as his hand reached through my curtain of hair. He took hold of my chin and tipped my head up so I met his eyes again. Using his other hand, he wiped away the tears that flowed down my cheeks.

“I only want to make you cry happy tears from now on.”

“I like that idea.” He wiped away the rest of the tears.

We both ate our soup and I sensed Fin was trying to think of what to say next. This moment seemed so anti-climactic. Both of us in his apartment eating soup.

“I have something to ask you,” he said when our soup bowls were both empty. I could definitely go for seconds, but I wanted to know what he was going to ask first.

“Go ahead.” The answer will be yes, I don’t say. I’d pretty much say yes to anything he asked me right now.

“Would you…” he trailed off and chuckled to himself, smiling.

“Would I what?” I said. He got up from the stool and took both of my hands in his. For a brief second, I thought he was going to get on his knees and propose. But that was preposterous. We were nowhere near being ready for that.

“Would you, Marisol Everly, be my girlfriend?” He just looked so sweet asking me. I couldn’t help but smile. Before I could say anything, he continued. “I know I’ve never exactly combined sex and love, but I want to try with you. I’ll need you to tell me when I’m doing it wrong, or if you’re unhappy. I would never, ever want you to be unhappy.” I reached out and put one hand on his mouth.

“Shh.” He stopped and waited for me. This was quite a change. I wasn’t used to Fin being so… compliant. Willing to let me be in control. I liked it and hoped it was a view of things to come.

“Yes, Fin Herald, I will be your girlfriend. I haven’t exactly been successful at dating either. We’ll fumble through it together.” He smiled against my hand and his tongue flicked out and licked my palm.

The air in the room changed, thickening and growing warmer. Fin licked my hand again and I couldn’t deny what I wanted any longer.

And then he pulled away.

“We shouldn’t.” I nodded and leaned back. We definitely shouldn’t right now. But I didn’t know how long I could resist him. It had been a while since I’d had physical contact with Fin and I ached for it. I needed him in a fundamental way.

“I think, if we’re going to make this relationship work, we should… start over. I don’t mean that we should ignore everything that’s already happened, but maybe go back and do things the right way. Have dates where I drop you off at the end of the night with just a kiss. I don’t want to fuck this up, Marisol. I want that more than anything.” He shut the dishwasher and I jumped. I understood what he was doing and I liked the idea of it. I just wasn’t sure how it would go in practice.

I was having an excruciating time keeping my hands off him and it was only going to get worse the longer I was with him.

“I think that’s a good idea,” I said. He breathed what seemed like a sigh of relief.

“I really want to do this right,” he said. I got up off my stool and walked toward him.

“Don’t worry, I’m just going to hug you. Hugs are allowed, right?” He nodded and I put my arms around him. He wrapped his arms around me and I let myself sink into his chest. Just being surrounded by his scent made a tightness in my chest loosen. When he was gone, I always felt like something was missing. Now, I was at peace. Things were back the way they should be. We just had to try to keep them that way, and it wasn’t going to be easy.

“I really, really missed you,” I said as he stroked my hair.

“Oh darling, you have no idea.”

In honor of our new dating rules, I didn’t stay the night at Fin’s. He came with me as Carl drove me home and gave me one soft kiss on the front steps before turning around and walking back to the car. Still, that kiss set my lips on fire and made me liquid. I could barely walk to the elevator.

After I walked into my apartment, I checked my phone. I’d turned it off when I was with Fin because I had the feeling I was going to get all sorts of messages from Sloane asking what was going on.

Bingo. I knew her too well.

Instead of answering the myriad of messages, I called her.

“Well?” she said by way of answering.

“Well, I guess I have you to thank. You’re quite the sneak when you want to be.”

“I’m a giver. I just want everyone to be happy. And it was totally worth it to see the look on your face.” I bet it was quite something. “And in exchange for my help in the name of love, I demand details.” Of course. I laughed and flopped down on the couch and told her that Fin and I were officially together and we were going to take it slow, starting with the ball.

That made me think of the letter I’d written him, saying all the things I wanted to say when he was away.

I finished the conversation with Sloane as soon as I could and then got the letter out. Damn, it was long and some parts were hard to read because my brain had moved faster than my pen. I skimmed the words and tried to decide if I ever wanted him to see this. Then I saw the mention of Chase and decided not to. Fin didn’t want to hear about the guy who’d flirted with me and who I’d spent time with while he was gone.

Folding up the letter, I decided not to throw it away, but to tuck it in a drawer. Maybe I’d show him someday. Not today, though. Not today.

I couldn’t sleep that night and my cheeks were numb from smiling. I just couldn’t help it. Fin was back and he was free. Even if he hadn’t wanted to be with me, I’d be ecstatic for him. But now we’re together and it’s the best possible outcome. Plus, I had a date for the ball.

Asha King by Wild Horses
A Fine Passion by Stephanie Laurens
Undone (A Country Roads Novel) by Shannon Richard
Fish in the Sky by Fridrik Erlings
Ghost Stories and Mysteries by Ernest Favenc
Nosferatu the Vampyre by Paul Monette
Night Terrors by Dennis Palumbo
The Handsome Road by Gwen Bristow
Healing Hearts (The Challenge Series) by Crowe, Liz
Phone Calls From a Rock Star by Paul, J. L.
Our partner