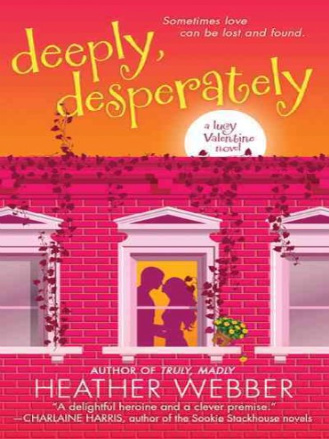 "Fun characters, sparkling prose, and a twisty plot add up to a great beginning for Valentine, Inc."

"Snappy and fresh--a delightful mix of intrigue and humor!"

--Jane Porter, author of
Mrs. Perfect
and
Easy on the Eyes

"Lucy Valentine is as comic and romantic as her name implies, not to mention engaging, sexy, and smart. She has an otherworldly knack for finding lost objects, and will undoubtedly find her creator, Heather Webber, many new fans."

"With characters that sparkle like diamonds on the page, this is my new favorite Valentine! Heather Webber has created a bright new world, populated by quirky characters and brimming with non-stop action--I'm a fan!"

This is a work of fiction. All of the characters, organizations, and events portrayed in this novel are either products of the author's imagination or are used fictitiously.

To my family.
You've taught me what true love is all about.

My deep gratitude goes to Jacky Sach, who heard a proposal about a psychic matchmaker and thought it was a
great
idea; Jessica Faust, who made what could have been a difficult transition as easy as could be; Hope Dellon, whose amazing editing encourages me (and Lucy) to dream bigger; my St. Martin's family, including Laura Bourgeois, Anne Marie Tallberg, Matthew Shear, Ryann Gastwirth, Eileen Rothschild, Jennifer Enderlin (thank you, especially, for the titles), and everyone who had a hand in
Truly, Madly
and
Deeply, Desperately
going from manuscript to bookshelf; to my Massachusetts friends, who remind me of the little details when my memory falters; and to all the readers who have taken the time to tell me that You Love Lucy. Thank you all.

Justifiable homicide might be hard to prove, but my had-it-up-to-here brain was giving it a hearty stamp of approval as a reasonable defense.

Because if reporter Preston Bailey didn't stop peppering my client with annoying questions, I might have to strangle her.

And because that might be bad for business, I clasped my hands together to resist the urge. I looked across the conference table, trying to get Preston to shut up with a not-so-friendly glare.

A month ago when the Lost Loves division of Valentine, Inc., my family's Boston-based matchmaking firm, was officially created, my office had undergone a subtle transformation. I opted to add a cherrywood conference table, downsizing my desk to a small corner unit. I liked the new look, which was usually all warm and cozy, but right now it felt more like a potential crime scene.

"And what's your favorite brand of underwear, Leo?" Preston was saying. Long blond hair had been piled atop her head in a messy knot, strands spiking
out every which way. It was an edgy look Preston pulled off well, but would look like bedhead on me.

My client, Leo Epperson, who was eighty-three years old, glanced helplessly at me.

"What?" Her razor-cut blond bangs puffed upward on a drawn-out sigh. "Lucy, everyone knows that your brand of underwear says a lot about your personality." She eyed me, narrowing her blue gaze. "I bet you're a Fruit of the Loom girl. Granny panties. Cotton. Maybe polyester. No. Definitely cotton."

I shifted in my seat, suddenly uncomfortable in my--hah!--Victoria's Secret cotton undies. "I think Leo and I should have some time alone."

Preston's face paled. "What? No way. I need all the information I can get. Remember, Lucy, your father agreed to these articles. And so did Leo." She smiled at him, warm, friendly, and sincere.

I had to admit the smile did a lot to soften her angular features, dull the irritation of her presence. Preston worked as a reporter for the
South Shore Beacon,
a small newspaper with a low (and dropping) circulation. We'd met a month ago under some not-so-great circumstances and somehow--my (traitorous) father had a hand in it--she had talked me into doing an article on my role at Lost Loves.

My role being the finder of lost loves. As in, Lucy Valentine, Lost Love Locater. I liked the sound of it.

Sometimes good old-fashioned legwork was all it took to track a lost love. And other times ... Other
times I had to rely on my psychic ability, a gift that allowed me to find lost objects--and lost objects only.

That hadn't always been the case. Once upon a time I'd had the ability to see auras--like my father, world-renowned matchmaker Oscar Valentine, and all bloodline Valentines. It was a gift supposedly bestowed upon our family by Cupid himself centuries ago, but at fourteen my power to read auras had been zapped out of me by an electrical surge during a thunderstorm and my gift of finding lost objects had been zapped in.

For years I believed myself the black sheep of my family (which was saying something) because the success of my family's matchmaking business, Valentine, Inc., relied on pairing lovers by secretly matching the colors surrounding them. Feeling like a familial failure, I disavowed my trust fund and spent years jumping from one dead-end job to another until I realized that finding lost objects could be instrumental in finding long-lost loves ...

If only it were that easy to get rid of her.

She arched a thin eyebrow. "But--"

"No." Frankly, she was lucky I'd let her in the building. We didn't have a good history. And it hadn't gotten any better after she talked me into locating her long-lost boyfriend, only to tell me, once I found him, she had no interest in rekindling that particular
relationship. She'd simply wanted to document the search for an article for the
Beacon
. The reunion might have been a bust, but the article had been a brilliant success, and because of it Preston and my father had agreed to extend the article into a series of pieces.

The publicity had been great--the phone at Valentine, Inc., had been ringing off the hook with potential clients. The downside was that Preston was around. A lot.

"Fine," she said, slumping back in her chair. She left her digital recorder running on the table.

"Is it still okay with you?" I asked Leo. "I know you agreed to have Preston chronicle the search for Joanne, but it's not too late to back out."

"Thank you," Preston said, giving me a glare. She then turned to him and smiled, a hundred watts of pure charm.

Leo winked at her, but not in an icky Anna Nicole Smith/J. Howard Marshall kind of way. More like a co-conspirator, we're-in-this-together, leave-no-man-behind kind of way.

This meeting was going downhill fast.

Leo rubbed a gnarled arthritic finger on the tabletop. "Have you had any luck, Lucy? In finding Joanne?"

"Is that like being a little bit pregnant?" Preston asked, a grin pulling on her smug lips.

"I thought you were going to be quiet."

Preston addressed Leo. "Did I agree to be quiet?"

His face brightened at her attention. "Not that I recall, though you did agree to no more questions."

I gave her a so-there look.

She wouldn't let up. "You're not pregnant, are you, by any chance? That would be a great headline. A scoop like that could take me places."

"No," I squeezed out. But the word "pregnant" hung askew in my thoughts, reminding me of my grandmother Dovie, who was on a quest to see me with child as soon as possible. Her motivations were purely selfish--she wanted a great-grandbaby.

"Pregnant" also reminded me of Sean Donahue, the sexy PI who was also now my business partner in the Lost Loves venture. Chemistry sizzled between us, but he was recovering from the breakup of a long-term relationship, and I had commitment issues stemming from Cupid's Curse, an ancient hex placed on my family that prevented any Valentine from finding his own perfect match.

It didn't bode well for my future with Sean.

So we were taking things slowly. Painfully so.

I didn't want to think about it, so I checked my watch. I was meeting Marisol, one of my two best friends, in a half hour for some sort of secret rendezvous she wouldn't tell me anything about. "Be there or be square," she'd said. How could I possibly resist?

"Sean tracked Joanne to a residence in Lakeland, Florida," I said, trying to ignore that Preston was
even in the room. "She lived there until three years ago, but from there she's disappeared."

Small and wiry, Leo was all of five five and weighed a hundred fifty pounds at most. Still sprightly, his face normally glowed with good health but was now wrinkled in concern.

Leo had come to me after hearing about Lost Loves through a friend of a friend who'd been matched by my father. Sean and I had been on the case for just over a week.

Leo had met Joanne Thomasino, now Joanne Winston, right after high school at a Cape Cod beach. They'd flirted, he asked her out, she agreed. Not six months later, at the end of 1943, Leo was on his way to the South Pacific to fight in World War II. Joanne promised to always wait for him.

"I honestly don't know, Leo. There's no death certificate. But there hasn't been any activity on her credit reports, either."

"Wouldn't that be rich," he said, flinging his hands in the air. "All this time she thought I was dead and now she might be."

"Oh, that's a good quote!" Preston leaned forward to check her recorder. "Can you say that again? Just in case?"

She released an exasperated sigh and pulled a notebook from her bag on the floor. " '... dead and now she might be,' " she murmured while she wrote. She waved her pencil. "Go on, go on."

It all spilled out. How Leo had been taken prisoner overseas, marched to a POW camp. Along the way, many of his buddies had been killed, dumped into a mass grave. Leo feared he eventually might be killed as well, and his body possibly never found. He didn't want his family to always wonder what had happened to him, so he'd taken his dog tags off and thrown them into the grave with his fallen comrades.

He sat in a POW camp for four years, well after the war ended, before finally being released. But the damage to his personal life had already been done. Two years before, the mass grave had been uncovered and his family had received a notice of his death. When he (surprise!) returned to the States, his family informed him that Joanne had married another after mourning her beloved Leo.